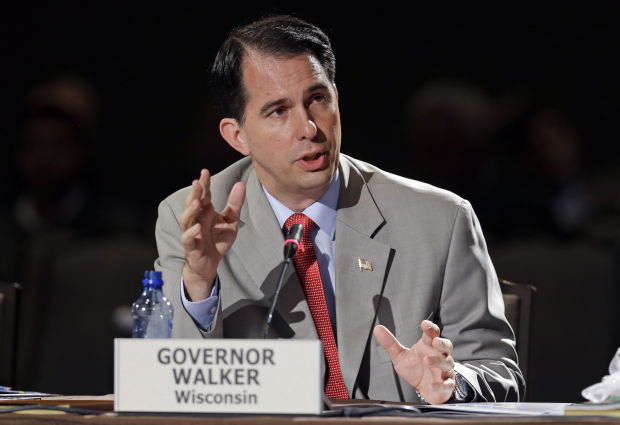 Wisconsin Gov. Scott Walker speaks during a meeting on jobs and education at the National Governors Association convention last year in Nashville, Tenn. Walker has been noncommittal on an Assembly proposal to give letter grades to schools, force failing schools to become charters and require school receiving voucher students to be involved in the testing.

MADISON — Wisconsin public schools deemed to be failing would have to become charter schools under a bill introduced Wednesday that was the first of the 2015 legislative session and placed on the fast track for passage.

The Republican-backed proposal would also, for the first time, impose letter grades based on multiple performance measures for every public and independent charter school as well as private schools that accept taxpayer-funded voucher students.

Gov. Scott Walker and Republicans who control the Legislature have said they wanted to act quickly on a proposal after years of failure to reach agreement on the matter.

“This is the most important bill we have on our schedule right now,” said Assembly Speaker Robin Vos, adding that he wants to pass it by the end of the month.

It’s unclear whether the version introduced Wednesday will get the support of Walker and Republicans who control the Senate. Walker spokeswoman Laurel Patrick was noncommittal.

“We will review the bill,” Patrick said. “Gov. Walker looks forward to working with the Legislature on an accountability bill for all schools receiving state funds.”

Democrats and the head of the largest teachers union said the bill was designed to kill off public schools.

“The bill charts a course for the end of our neighborhood public schools as we know them, paving the way for struggling schools to be converted to privately-run charter schools unanswerable to locally elected school boards and taxpayers,” said Betsy Kippers, president of the Wisconsin Education Association Council.

Sen. Jennifer Shilling, the Democratic minority leader, said the bill showed Republicans wanted to “rush to take over control of our local public schools.” She said the emphasis instead should be on increasing accountability and academic standards in the voucher program.

Tom McCarthy, spokesman for the state Department of Public Instruction, said the bill was being reviewed, but hinted at possible problems that could lead to a lawsuit.

“It is vital that any proposal to hold schools accountable results in improved outcomes for all children and is constitutionally viable in relation to the state superintendent’s authority to supervise schools,” McCarthy said.

The bill would force a failing public school to reorganize as a charter school if it doesn’t improve within four years. A failing private school that accepts students receiving taxpayer-funded vouchers would not be allowed to take new voucher students. A failing independent charter school could lose state aid.

The goal, Vos said, is to ensure that no school is failing.

They are different from private schools that accept voucher students. Under that program, students receive a taxpayer subsidy to pay for their tuition at private schools.

The voucher program was expanded statewide in 2013 and has an enrollment cap of 1,000 students. That cap is expected to be loosened, or possibly eliminated, by Walker and the Legislature this year. There are no caps on the program in Milwaukee and Racine.

The sanctions for schools receiving grades of D or F would not take effect until the 2017-18 school year, and it would be at least 2021 before any public school could be closed or any private school would be kicked out of the voucher program.

The bill also would allow schools to choose from up to four different standardized tests to measure student performance.

The bill also would create a 13-member board to oversee the process under which schools will receive grades. The state superintendent would be the chairman and would appoint six members. The governor would appoint two and legislative leaders — two Republicans and two Democrats — would pick the other four.

Legislative leaders met privately Tuesday to discuss the measure, and at least one significant change was made after Republican senators raised an objection.

The bill previously would have forced teachers and principals to be fired at failing schools, but that was removed over objections from Republican Sen. Paul Farrow, who was working on his own accountability bill.

Farrow said he was optimistic that changes made to the measure will help ease its passage.

“I think we’re closer together than we have been in a long time,” Farrow said.

Close schools. Yes, that's the way to improve education. While you're at it, use the opportunity to turn the students over to for-profit corporations managing charter schools. Charter schools have no better record than public schools, but they do divert money from public education into the pockets of investors. Wisconsin really has some smart citizens.

Now, why doesn't the usual hotshot with the verbal diarrhea write a multi-paragraph screed in opposition to this post?

And this from the governor who failed college. You couldn't write a script more stupid than this.

Finally we are starting to put The Kids first. Great news for public education reform. While we're at it how about increasing teacher standards and finally holding them accountable for once. Get rid of burnt out incompetent bitter staff and bring in the newly trained and educated young people who want to dedicate themselves to The Kids rather than the 1%er wage, benefit and retirement packages. Next increase the retirement age to 62 like the private sector working stiffs who are paying the bulls. We need to make better use of our school facilities that are sitting empty during the summer months. Wis Act 10 has provided the tools to administrators to take back control of our schools from the over reaching teacher unions. Now is the time to use those tools improve the quality of public education. Hey do you think the teachers will ever riot in Madison again? Lets return to the days when The Kids came first.

These voucher are all fine and dandy to feather the beds of Walker and the other Tea Badger's campaign supporters, except it violates that pesky Wisconsin Constitution. Who would have thought this coming from the party of the constitution?

http://bcpl.wisconsin.gov/docview.asp?docid=22545&locid=145
District schools; tuition; sectarian instruction; released time.
SECTION 3. [As amended April 1972] The legislature shall
provide by law for the establishment of district schools, which
shall be as nearly uniform as practicable; and such schools
shall be free and without charge for tuition to all children
between the ages of 4 and 20 years; and no sectarian
instruction shall be allowed therein; but the legislature by law
may, for the purpose of religious instruction outside the
district schools, authorize the release of students during
regular school hours. [1969 J.R. 37, 1971 J.R. 28, vote April 1972]