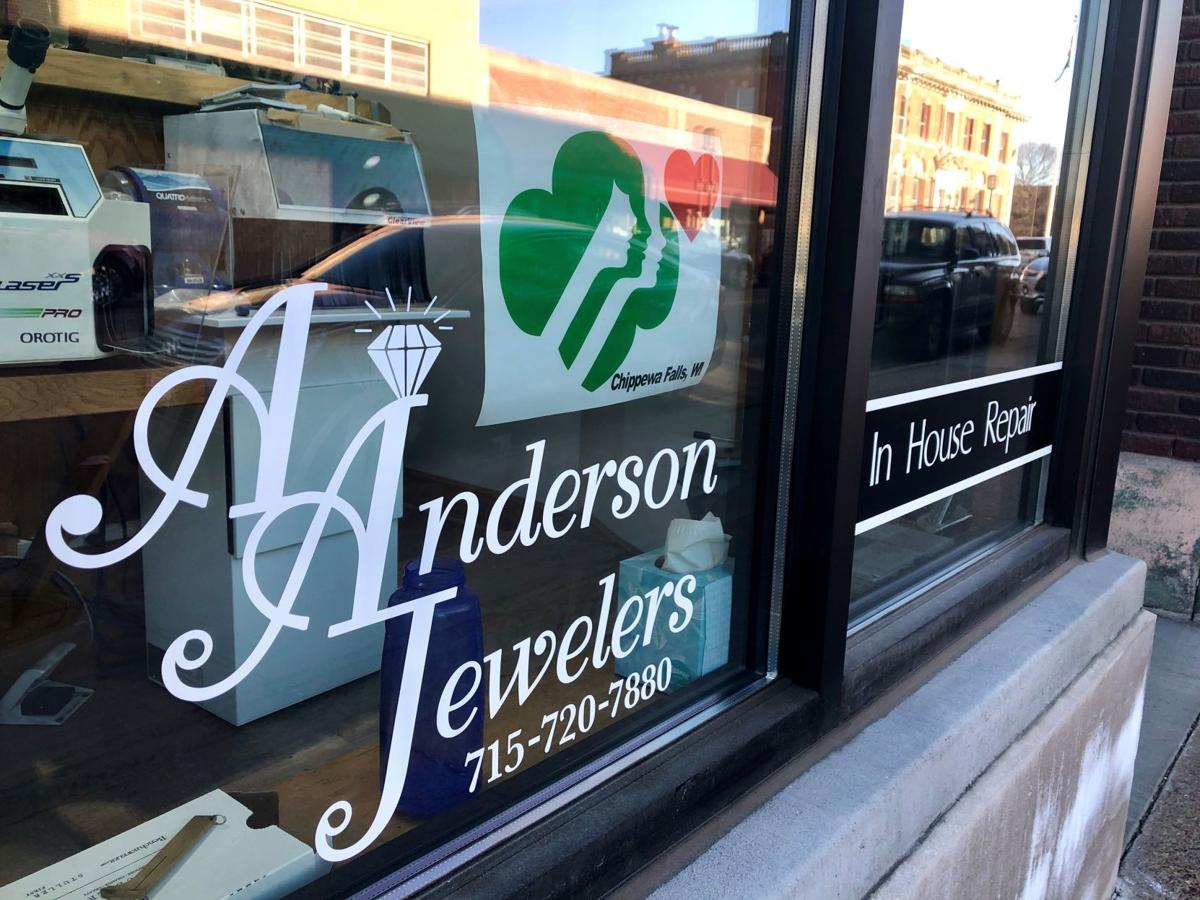 A sign honoring the Girl Scouts hangs in a window of a downtown Chippewa Falls business. 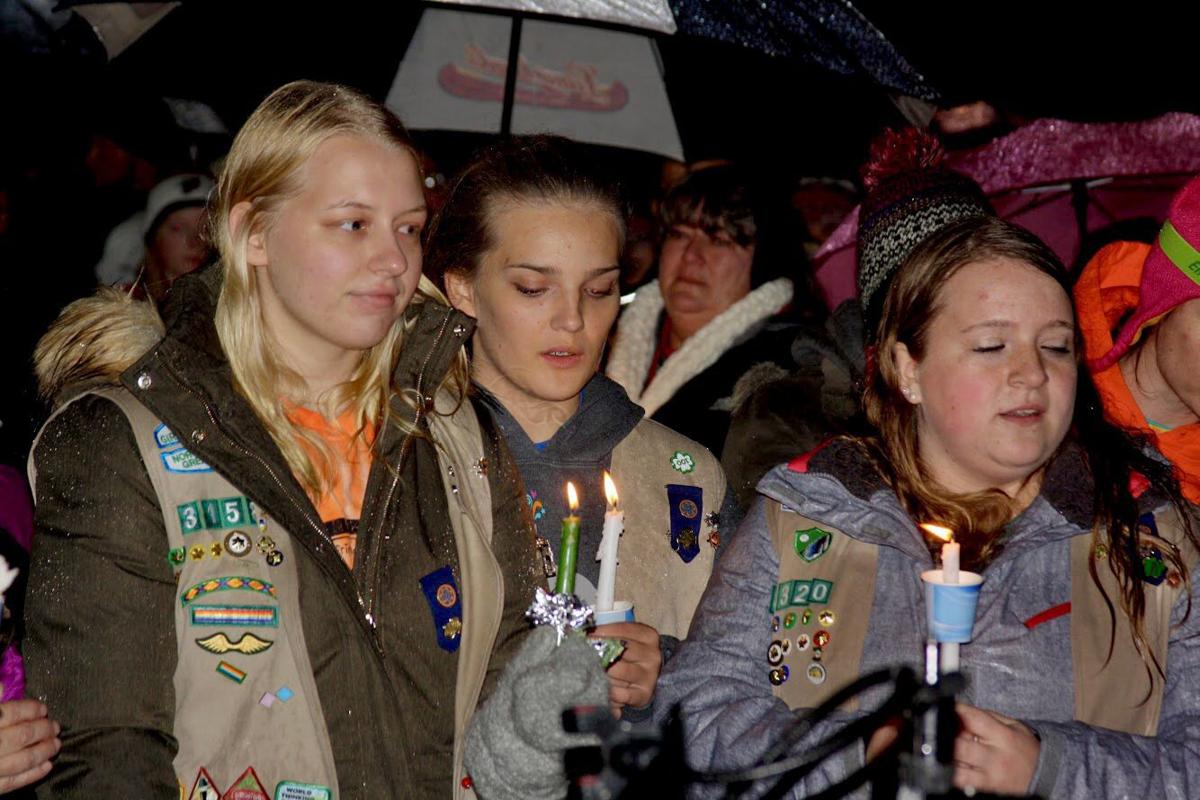 Girl Scouts and community members gathered in Chippewa Falls last November to remember the victims of a fatal hit-and-run accident. 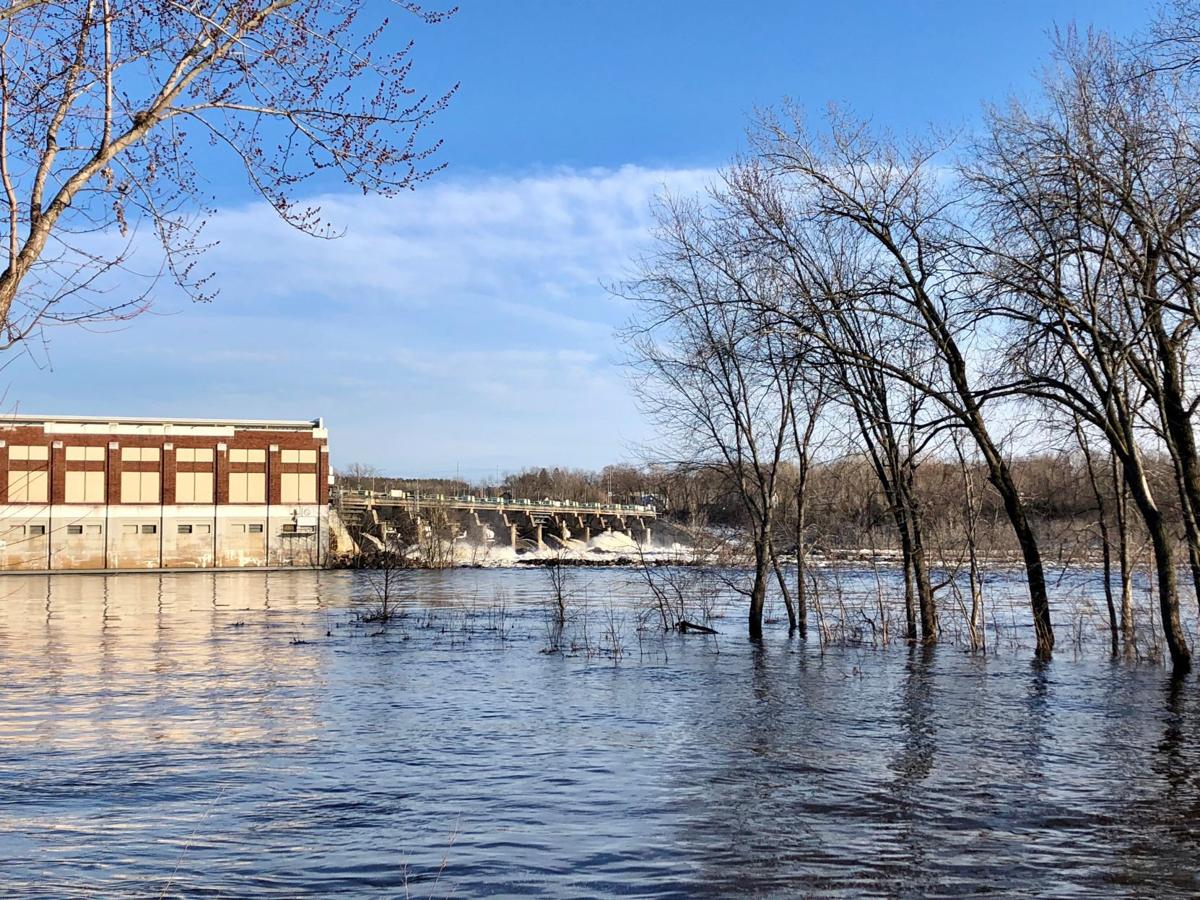 One reason Chippewa Falls responds so well in tragedy, many say, is that it also comes together in good times. 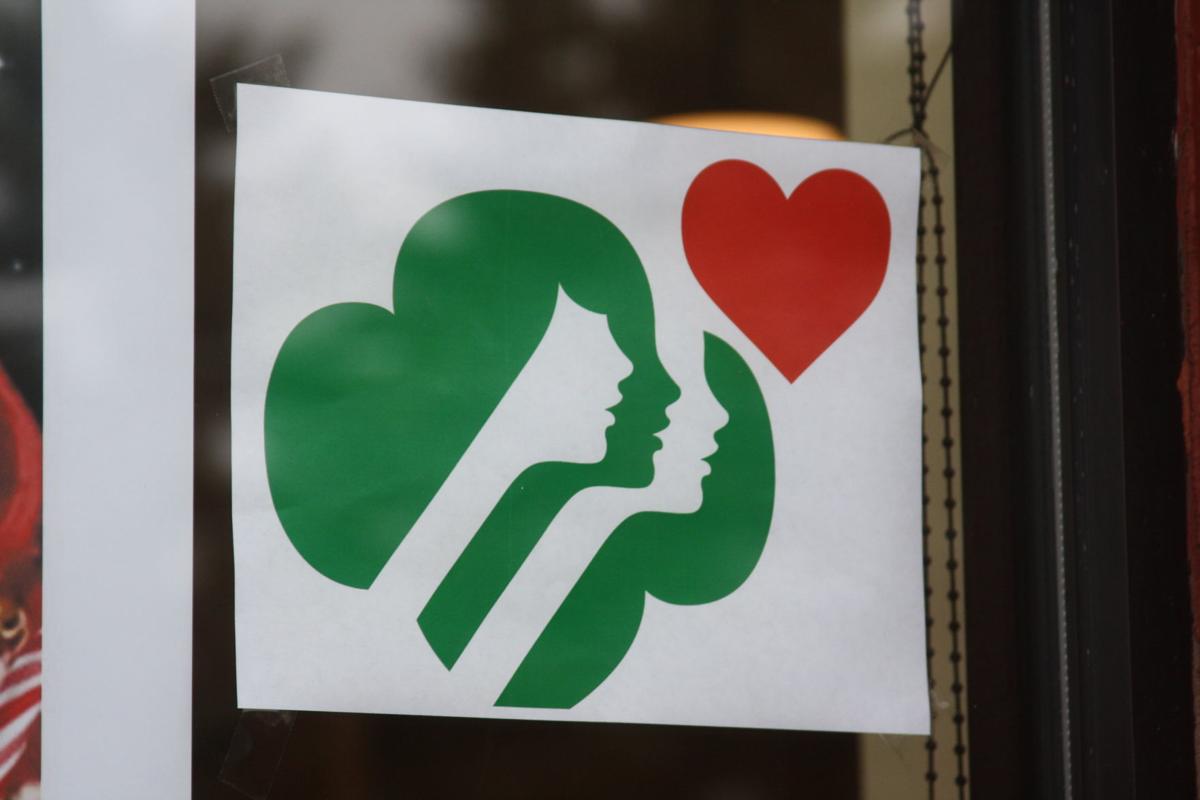 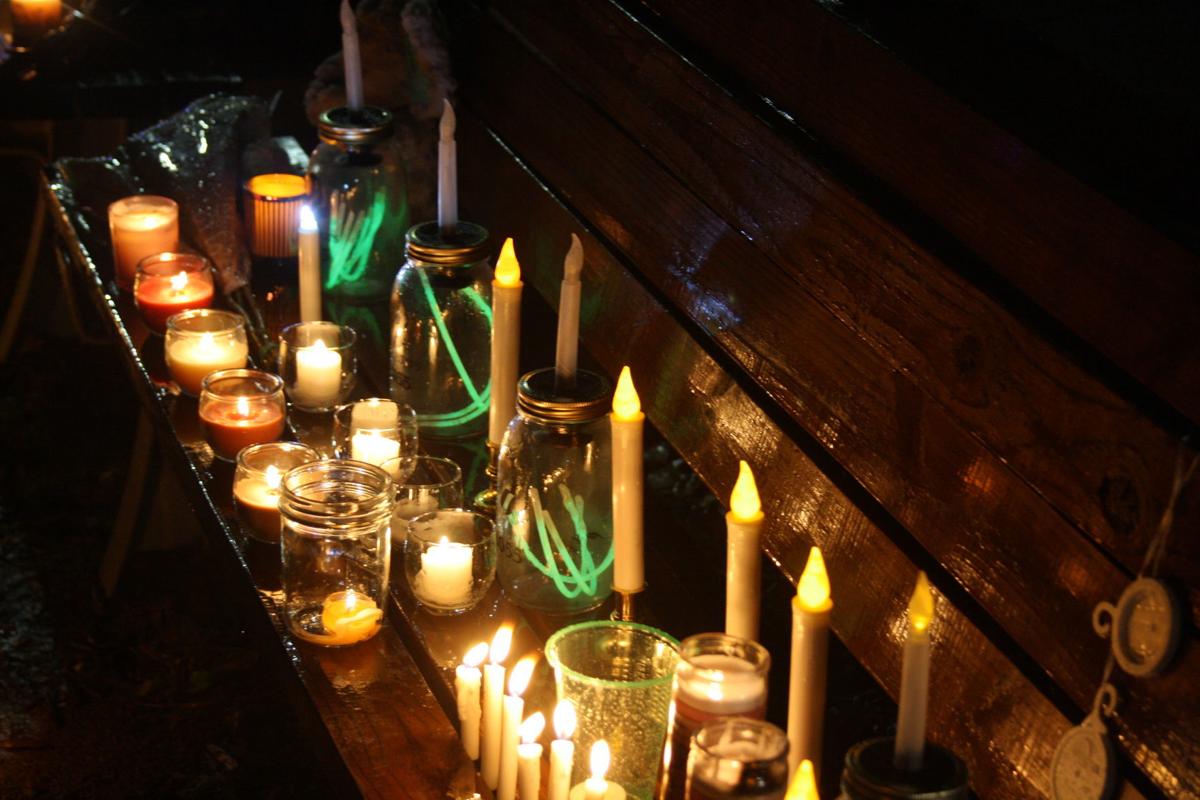 A collection of candles, teddy bears and other items placed in front of Halmstad Elementary School in Chippewa Falls in honor of the deceased Girl Scouts and mother.

In times of both peace and crisis, the Chippewa Valley can be trusted to come together and make the best out of any situation.

The latter portion of 2018 was a hard and trying period in the city of Chippewa Falls. The passing of three girl scouts and a parent in an automobile crash and also the disappearance of a young Barron girl sent shockwaves throughout the community which are still being felt to this day. The community responded quickly, but the people who make up this community will never forget those lost.

Three girl scouts in Troop 3055 — Jayna Kelley, 9, Autumn Helgeson, 10, Haylee Hickle, 10, and her mother, Sara Jo Schneider, 32 — were collecting trash near the Hwy. 29 overpass in Lake Hallie last fall when they were struck and killed by an oncoming car. The tragedy left four dead and another seriously injured who was later released from the hospital and is on the road to recovery. This event sent shockwaves throughout the Chippewa Falls community that are still being felt.

Patricia Bushland, co-owner of WCFW Radio, said the community jumped up and come together after the tragedy to try and do whatever the could for the families affected by the senseless tragedy that ended the lives of four members of the Chippewa Falls community.

“I don’t think there was anyone in this community who wasn’t affected by that,” Bushland said. “There was quite a bit done to help those families and there absolutely should’ve been. Chippewa is a close knit community and they feel deeply when something happens in their city. People are willing to stand up when they can.”

Teri Ouimette, Director of Chippewa Falls Main Street, said the community responded well to the tragedy, but has and will not forget what the community has lost.

“Everyone wanted to do something, but all they could really do was just show their support,” Ouimette said. “We are not forgetting about those we’ve lost and we need to keep them in our hearts.”

When the girl scouts lost their lives that afternoon, the members of the Chippewa Falls community tried to do their part to help the grieving families, but the businesses that make up the city jumped to act as well.

Ouimette and Chippewa Falls Main Street made signs using the Girl Scout Troop 3055 logo for businesses and people to hang in their doorways to show support for the fallen. These signs were picked up at the Main Street office and posted up at local restaurants, schools, government offices and any type of business or building you could imagine. And for those who couldn’t make it down physically to get the posters, the PDF for which they were printed from was sent out and individuals printed them off on their own and posted them up for all to see.

And while the heart of this effort was made in Chippewa Falls itself, the effort made its way across the U.S. as the story did Ouimette said.

“It went a little viral actually,” Ouimette said. “We had people from Tennessee and Virginia emailing me, all-in-all about 10 or 11 states contacting me about it. It was bigger than just Chippewa Falls, but downtown businesses in Chippewa Falls coming together really made a difference.”

Other ways in which Chippewa Falls businesses helped were with the funeral costs, fundraising efforts for the Girl Scouts and for the scout who was injured in the crash.

Some started GoFundMe pages for the injured, some offered to spread the color green through hairstyling and clothing, some held charitable events and messages of love and support for all affected could be seen on social media for weeks and months following the accident.

Holly Morrison, Chippewa County Humane Association shelter manger, said the members of the Chippewa Falls community sho wed last year just how big their hearts are how the city can come together when hope is hard to find.

“It proves that tragedies really bring communities like ours together,” Morrison said. “You find out how nice your neighbors are and people who live miles and miles away from you are willing to come together and help with any situation that comes up in Chippewa County. It’s amazing how much the community can work together when it is really needed.”

Another event that tested the strength of the Chippewa Valley was when Jayme Closs, 13, was abducted from her home in Barron. After a man broke in and killed her parents James Closs, 56, and Denise Closs, 46, Jayme was abducted and held captive for 88 days until she managed to escape and find help. Community members all over the Chippewa Valley did their best in this tragic period as well by helping in the search for Closs and aiding in the search both financially and physically.

Executive director for the Heyde Center for the Arts, Debra Johnson, said the reason Chippewa Falls can manage to come together and help in tragic times like the Jayme Closs search and the girl scout accident is the community has built up a good amount of good faith and progress over the years by not allowing politics and petty issues to divide the community.

“When we come together in good times we create a base for that response when bad things happen,” Johnson said. “It helps us respond quickly in times of tragedy because we have established connections, trust and a sense of community that we can pull out when times get tough.”

“What’s really working well in Chippewa Falls right now, is that in good times and bad times, we have few territories where people can’t work together due to something,” Johnson said. “There just doesn’t seem to be as many egos and points of conflict than there has been in the past. People just seem to come together pretty willingly and pretty easily, because it is all for Chippewa Falls.”

Whether it is financial support, physical support or just spreading love throughout the community, Chippewa Falls has shown that in both good times and bad the citizens of the city can count on each other when they need it most.

“When we come together in good times we create a base for that response when bad things happen. It helps us respond quickly in times of tragedy because we have established connections, trust and a sense of community that we can pull out when times get tough.” Debra Johnson, Heyde Center for the Arts executive director

A sign honoring the Girl Scouts hangs in a window of a downtown Chippewa Falls business.

Girl Scouts and community members gathered in Chippewa Falls last November to remember the victims of a fatal hit-and-run accident.

One reason Chippewa Falls responds so well in tragedy, many say, is that it also comes together in good times.

A collection of candles, teddy bears and other items placed in front of Halmstad Elementary School in Chippewa Falls in honor of the deceased Girl Scouts and mother.