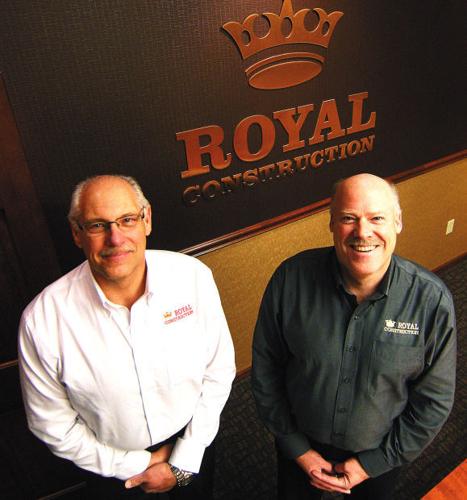 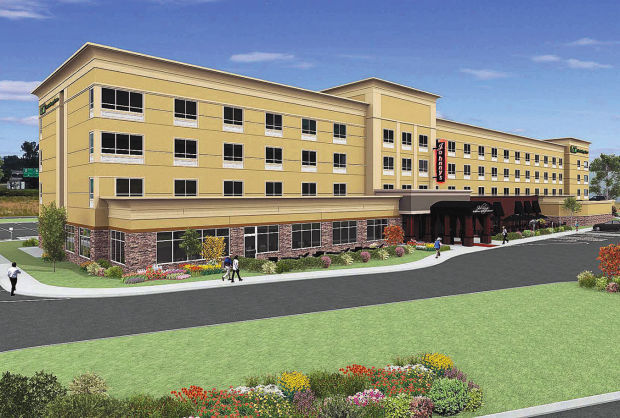 Scheduled to open this summer, the Holiday Inn Eau Claire will be a 130-room hotel conference center and include Johnny’s Italian Steakhouse. The 90,000-square-foot facility is located next to Globe University, and is visible from I-94, off of exit 68. 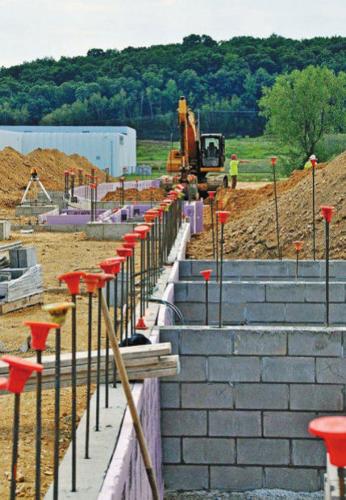 Foundation work on the 26,000-square-foot  first floor of the Holiday Inn Eau Claire began  in August 2012. 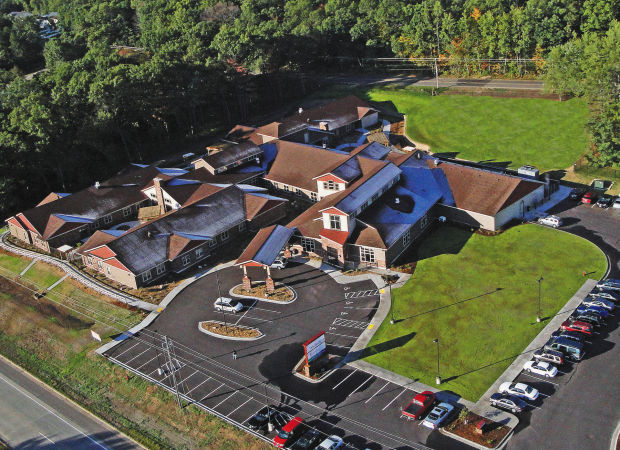 An aerial view of Dove Healthcare South located at 3656 Mall Drive on Eau Claire's south side. 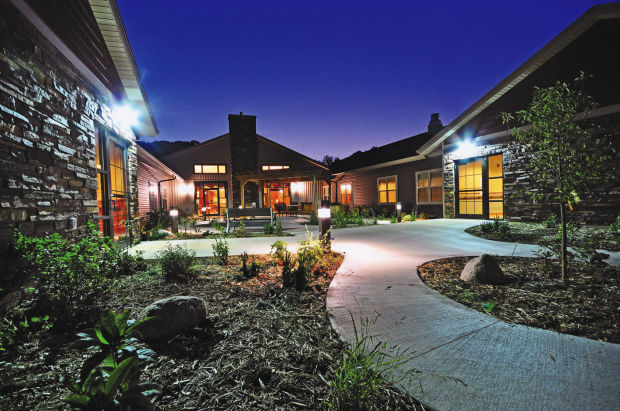 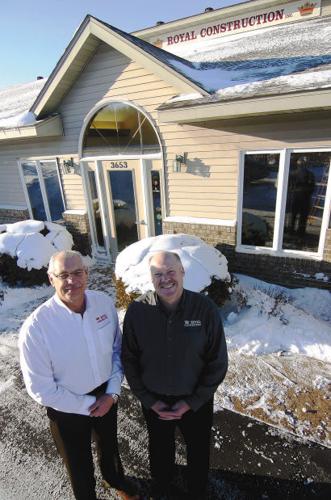 The words “construction company” spark thoughts of hammers, nails, cement, trusses and beams. Putting up a building, though, takes preparation that begins well before the first shovelful of dirt is even dug. In some cases it even requires the expertise of on-staff accountants and a health care administrator.

Land acquisition, annexation, rezoning and securing financing can be daunting for a business owner or administrator. Recognizing that market need from years of buying and developing properties, Royal Construction owners Tim Pabich and Tim Olson have built a development team that simplifies the lengthy and detailed process for the customer.

“We can streamline the process and help them through it more  cost-effectively because a lot of things have to be coordinated,”  said Olson, Royal Construction’s secretary and treasurer. “So instead of being a commercial-general contractor only and doing land development for ourselves, we have evolved into a design-build specialist where we specialize in preconstruction services to help owners get their project done in the most efficient and cost-effective way.”

“What we are is a one-stop service,” said Tim Pabich.

Within the past year Royal Construction has stretched its development team to include eight more specialists: a second certified public accountant; three project managers; three project superintendents; and a licensed health care administrator.

“The biggest thing we saw was that no construction company really understood the entire process,” Pabich said, “and we came up with a plan to assist somebody from start to finish, versus contracting with several different entities and taking a longer period of time, which in essence costs a lot more money.”

Construction of health care  facilities is an area where Royal Construction’s preconstruction  services have come into strong play. For instance, take its building of Dove Healthcare South in Eau Claire.

“In the Dove South situation, we were involved with land acquisition and all of the approvals that needed to happen in order to make that project become a reality,” Olson said.

Because Pabich and Olson also are licensed in real estate sales, they wrote purchase offers on the former Eau Claire Athletic Club and two properties on the back side of that parcel, and coordinated all closing transactions.

“We helped them through that whole process — the demolition, rezoning, and everything that  needed to happen to get it into one legal parcel so we could get approval to start construction there,” Olson explained.

After Dove, they realized that “most organizations and owners, whether for-profit or nonprofit, especially in the senior health care industry, have never been through a capital project of this magnitude,” Pabich said.

Having been through the process numerous times, Royal Construction was uniquely positioned to help.

That conversation led to Royal Construction’s completion in subsequent years of three Eau Claire projects for Dove: a new Dove Healthcare South nursing home; an addition to the Orchard Hills assisted living facility at Dove West; and a major mechanical system upgrade at the Wissota Health and Regional Vent Center  in Chippewa Falls.

A wave of several other nursing home, assisted living and senior housing projects in Menomonie and Spring Valley confirmed Royal Construction’s continued success in that market.

Royal has completed five new nursing home and assisted living facilities since 2007, plus two remodeling/upgrading projects at nursing homes. Two have received Projects of Distinction awards from the Wisconsin Chapter of Associated Builders and Contractors, Inc.: a gold in 2009 for Dove Healthcare South, and a silver in 2011 for Spring Valley Health Care Center, Inc..

For many of those projects, the firm used its financing expertise to capitalize on state incentives and a federal program implemented to respond to the care needs of the country’s aging population.

In 2008, Wisconsin’s Medicaid program began providing incentives to older nursing homes in need of replacement, upgrading or downsizing. Facilities can apply for extra reimbursement to cover the increased capital costs that come with a new project — such as interest and principal payments and property taxes — allowing facilities to recoup their increased costs. Facilities in Spring Valley, Baldwin, Glenwood City and Ladysmith were approved for this incentive program, and Royal Construction guided each  through the financing approval process, Olson said.

The state also provided guidelines for making new facilities more home-like and less institutional, such as designing them with “neighborhoods” or “households.”

“Each neighborhood is a lot smaller than the old long hallways,” Pabich said. “They have more glass, more activity areas, and a kitchen area in each of the neighborhoods.

“The whole philosophy of going to an old stale nursing home is totally different,” Pabich added, noting the state’s goal to provide greater options for senior care — residential care apartments, assisted living facilities, and an improved model of skilled nursing facilities. “Not everyone is automatically sent to a nursing home. It’s a goal that has come a long ways in serving people a lot better at all ages.”

Royal Construction has also helped rural communities access financing for nonprofit facilities through the U.S. Department of Agriculture’s Rural Development program. Open to communities with populations under 20,000, the program provides financing for large projects that are  usually beyond the lending limits of local financial institutions in those areas.

“What that does is open up a long-term fixed option for them,” Olson said.

The company has become proficient at helping facilities navigate the six- to nine-month process of securing financing through the USDA and other programs.

Seeing the potential of investing in areas where its preconstruction services could grow the company, Pabich and Olson added licensed health care administrator Shawna Kovach and certified public accountant Jeff Olson to its development team, along with several experienced project managers and superintendents.

Kovach arrived at Royal in January 2012. She is a font of knowledge on the evolving health care needs and requirements those facilities must address, from the initial stages of a construction project until after the doors open. She essentially brings “the left and right brain together” during the process so that construction matches health care needs.

“Nursing homes are the most heavily regulated industry in America, even more so than nuclear power, just by the sheer volume of regs,” said Deignan, now a consultant in the long-term care industry.

“I emailed Tim Pabich and asked him if I could pass along the credentials of someone that I thought would be worthy of him to consider looking at in terms of bringing on staff, or at a minimum  having that person in the fold as one of their preferred options to present to clients for a subcontractor,” Deignan said.

When evaluating their development team’s services, Pabich and Olson recognized that Kovach could help develop leads on new projects and explain Royal Construction’s full line of services. “She could talk the nursing home language as well as have contacts within that industry,” Olson said.

Her background also gives administrators a direct source to tap when making decisions on things like interior finishes, wandering and call systems, and patient flow.

“Everyone’s limited on time for all of that research, so if you can bring someone on board who has that background or is familiar with what’s out there and available … vendors, supplies, someone who has seen different facilities … it gets you there quicker without having to wait to waste or spend your time doing that homework on your own,” Kovach said.

Pabich and Olson decided to develop her current position, director of health care operations and marketing. Her services are individualized according to an administrator’s need.

“I can be plugged into the process anytime from beginning to end if they need it and want that,” Kovach said.

Jeff Olson, Tim Olson’s son, joined the staff in October 2011. He rounds out the financial end of the process. Coordination of the financing application process tops his list of responsibilities: Before a project can proceed, a financing package must be assembled that includes a  financial forecast incorporating all designs, construction costs, and new loan parameters into a facility’s financial statements.

Royal’s focus has shifted substantially since its beginnings in 1967, when Jerry Pabich opened Pabich Homes, Inc., a custom home-building  business. In many cases the company was building homes for the baby boomer generation — the same generation for which the firm is now building care facilities.

When Tim Pabich became part owner with his father and Tim’s brother Bill in 1990, Royal Construction was created, and the firm transitioned into commercial construction.

In 1999, Olson joined the business after a career in finance and an 11-year stint as vice president of finance for Heyde Health System and Heyde Companies. Tim Pabich and Olson created Arrowhead Properties to buy and develop commercial, multi-family and condominium projects, built by Royal Construction. Arrowhead Properties is an equity partner in the new Holiday Inn & Johnny’s Italian Steakhouse in Eau Claire, a current Royal Construction project that like previous Holiday Inn projects uses Royal’s preconstruction services.

After Olson came on board, Royal built up its preconstruction services.

“We went away from doing it for ourselves, where we purchased the land and separated it into lots and then did the construction, to helping and guiding others through the process,” Olson said.

Pulling from decades of experience, they have brought experts on board and now offer a full package deal that meets customers’ needs from start to finish, carving out a niche in the construction industry. As Pabich says, “We’ve been in their shoes.” Through all of the buildings now serving a host of purposes, Royal Construction is leaving a big footprint on communities throughout western Wisconsin.

Pam Braun is a freelance writer from Eau Claire.

Monkeypox: What we know about the virus as the WHO considers if the outbreak is an 'emergency'

Monkeypox: What we know about the virus as the WHO considers if the outbreak is an 'emergency'

Scheduled to open this summer, the Holiday Inn Eau Claire will be a 130-room hotel conference center and include Johnny’s Italian Steakhouse. The 90,000-square-foot facility is located next to Globe University, and is visible from I-94, off of exit 68.

Foundation work on the 26,000-square-foot  first floor of the Holiday Inn Eau Claire began  in August 2012.

An aerial view of Dove Healthcare South located at 3656 Mall Drive on Eau Claire's south side.