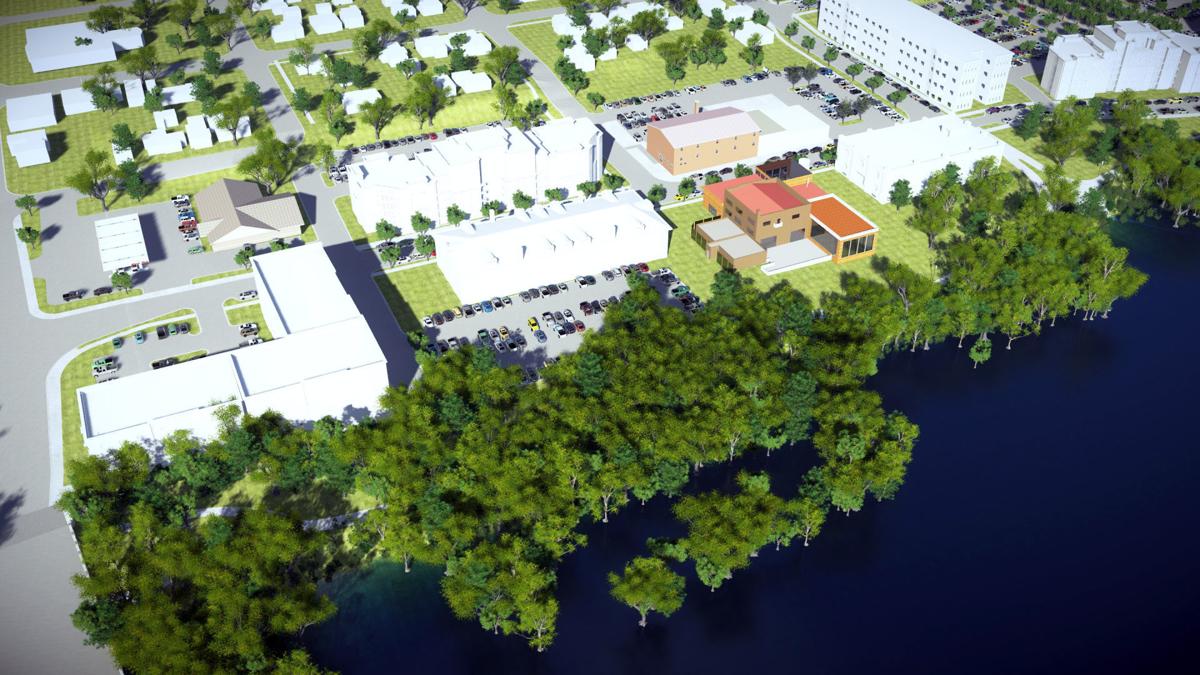 In this rendering of the Cannery District provided by Ayers Associates, the commercial portion of the downtown development is seen. 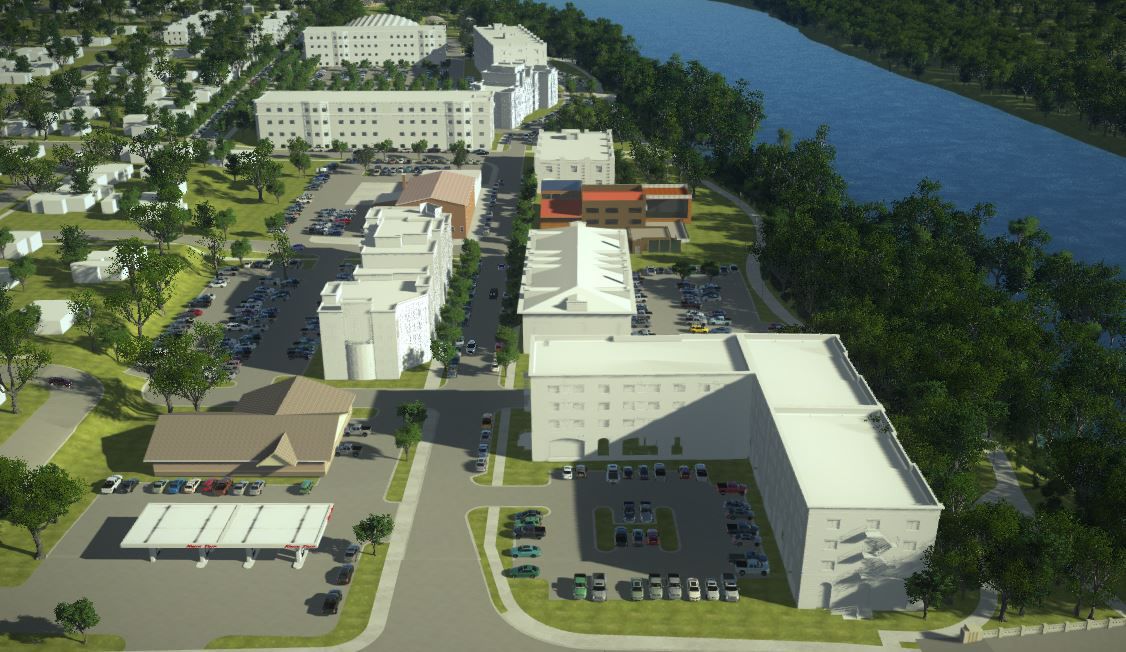 In the proposed revitalization, the riverside area is to be preserved as park and open space, and new housing, senior living, and business opportunities are planned nearby. 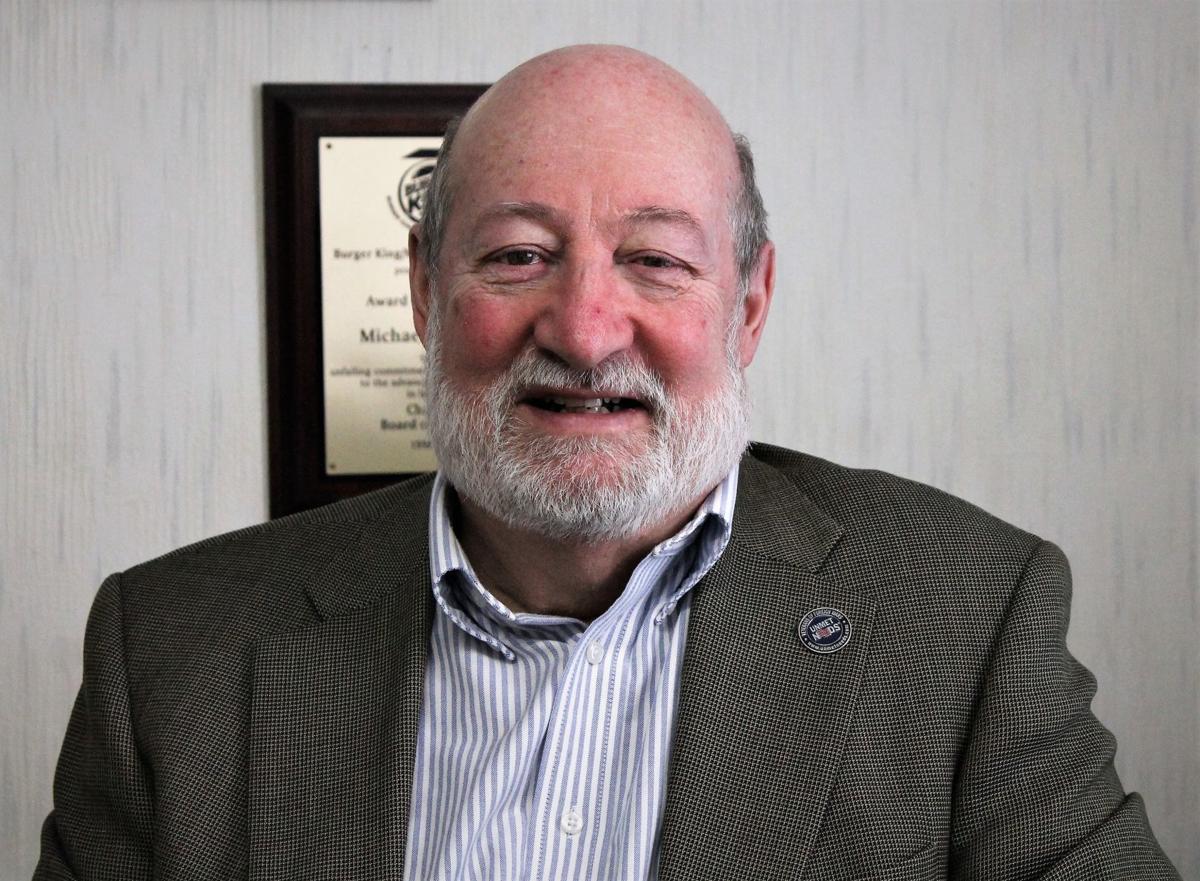 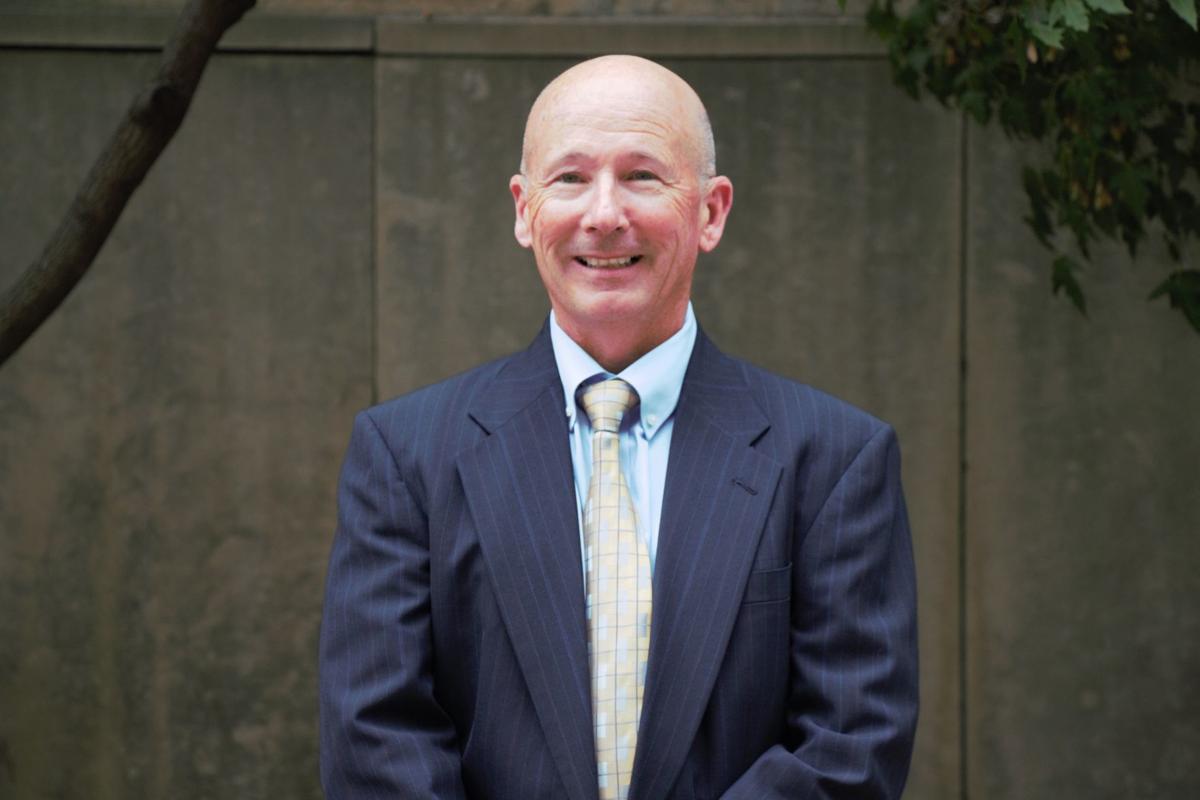 In this rendering of the Cannery District provided by Ayers Associates, the commercial portion of the downtown development is seen.

In the proposed revitalization, the riverside area is to be preserved as park and open space, and new housing, senior living, and business opportunities are planned nearby.

Eau Claire’s downtown east bank of the Chippewa River has been brought to a high shine, from Phoenix Park and its adjacent, gleaming office and residential buildings to the Pablo Center at the Confluence.

Now the west bank is going to get some love.

Just north of Madison Street, the 30-acre Cannery District, so named because the food processing industry in Eau Claire was once centered there, is going to become a varied, but cohesive mix of a community park, a bike path and redevelopment sites for commercial, residential, office and mixed-use projects. The housing types are projected to vary.

Michael DeRosa, chairman of the Eau Claire Redevelopment Authority, said, “There will be diverse types of housing. This may include market rate, low income, workforce, senior and assisted living and a single-family pocket neighborhood. The Redevelopment Authority held listening sessions and the attendees felt the RDA should consider a mixture of options.”

The anticipated diversity of the housing is in response to Eau Claire’s growing diversity.

Some residents require affordable housing. The Baby Boomers are aging and wanting housing that doesn’t isolate them on the periphery of the city, but rather keeps them close to downtown’s entertainment.

Those who are able to afford market-rate rentals and single-family homes also want options. The overarching reasoning for the redevelopment is to continue the renaissance of downtown Eau Claire and maximize its big, blue river, an asset that many cities lack.

DeRosa said, “The purpose of remaking the district is to bring that area in better alignment with the comprehensive plan, upgrade blighted properties, make better use of the riverfront and to strengthen the adjoining neighborhood.”

To honor the district’s history, it’s not simply a matter of out with the old and in with the new, as two historic buildings will be kept — The Brewing Projekt’s new location at 1807 Oxford Ave., which is the old Indianhead Foods building, and the Eau Claire Children’s Theatre at 1814 Oxford Ave.

Close to the Children’s Theatre and The Brewing Projekt, some of the redeveloping is already done, as a paved trail was installed in 2017 to connect Madison Street with the High Bridge.

Mike Schatz, economic development director for the city of Eau Claire, said, “You’re challenged, of course, when repurposing such an area, because you have to deal with contamination of old industrial buildings. Our forefathers did some things they shouldn’t have done, environmentally-wise. We deal with that all the time. As Americans, we get smarter all the time and learn more. We hope to generate more activity in this area by making it a healthier environment.”

When transforming a 30-acre parcel in a city, a typical problem is relocating people who already live there.

DeRosa said, “One of the challenges of redevelopment is gaining acceptance of those directly affected. It’s a challenge asking neighbors, property owners and tenants to put the bigger vision as a priority over personal wants.”

Timing is critical: Not too slow.

“Another challenge is timing, moving forward as fast as possible so property owners and their tenants can make decisions accordingly.”

Then there’s the reality of a finite budget.

“Another challenge is balancing the wants and needs of citizens with the reality of developers’ costs and making sure the market is there for proposed projects.”

Fortunately for the city and the Cannery District’s residents, it’s not a heavily populated area.

Schatz said, “We have very few houses to deal with, which is a good thing. It can be emotional when you’re moving people.”

Upgrades are also greasing the moves.

“We’re moving a few out of deteriorated housing conditions into better housing. We’re in the process of negotiating a purchase of the two duplexes behind Kwik Trip.”

What’s also greasing the process is more funding by the city.

“In the last two years, the city has put large sums of money into capital improvement to get it done faster. People have complained in the past about the pace of improvement. We now have a million dollars a year as opposed to the $200,000 to $300,000. The Redevelopment Authority continues to negotiate the purchase of property within the district with just a few parcels remaining. Look for acquisition to be completed by 2020.”

Schatz said, “What’s made it go easier is the community has the experience of seeing the redevelopment authorities do what they did in the Phoenix Park area. We took an area of blight and crime and made it into a farmers market and paths and gardens. They’ve seen that we can do it and the renaissance of downtown has brought a lot of energy and people want to see that continue. People now believe it can be done.”

Belief in the city comes in large part from the city listening to residents adjacent to the Cannery redevelopment.

“We talk to the surrounding neighborhoods to determine what they want, which is preserving greenspace along the neighborhood and connecting neighborhoods with bike trails. We’re trying to deliver what the citizens want in riverfront areas and people want to be able to walk and bike and move from district to district.”

The project is also boosted by the project delivering greatly desired elements.

DeRosa said, “The support for bike trails and how they help connect neighborhood is highly valued by our citizens, so that’s an easy sell of that component.”

The day Schatz was interviewed for this story was the day of his retirement, after 33 years of service to the city. He won’t oversee the project to its completion, but he’s happy knowing he played a part.

Schatz said, “We’re doing things now that the next generations will be able to enjoy and take advantage of. They’ll never know the people who did the work and made this possible. That makes me happy, imagining them being happy and deriving joy from our labor.”

You start with an idea, a name, and then you have to dot and cross countless i’s and t’s.

“To create a redevelopment district, the city has to follow state statutes. Many public hearings must take place and the city council has to approve the boundaries and operating plan.”

The park is projected for 2021 and the area from Madison Street to Platt Street is planned to have an urban feel with a mix of office and retail.

DeRosa said, “We expect that the area from Madison Street to Platt will have the most commercial and mixed-use projects. The areas further north will be more housing and community-based projects.”

Like a stone dropped into the Chippewa, the project’s effect will ripple in all directions.

“The redevelopment of the Cannery District will continue the rebirth that downtown Eau Claire is undergoing,” DeRosa said. “It will strengthen the adjoining neighborhood by giving them better access to green space, the riverfront, a newer expanded park, a brew pub, upgraded streets and more housing options.”

And the RDA is leapfrogging off its recent success just a hop across the water.

“I think the success of the Phoenix Park neighborhood has given the community the confidence that the RDA can do great things to transform an area,” he said.