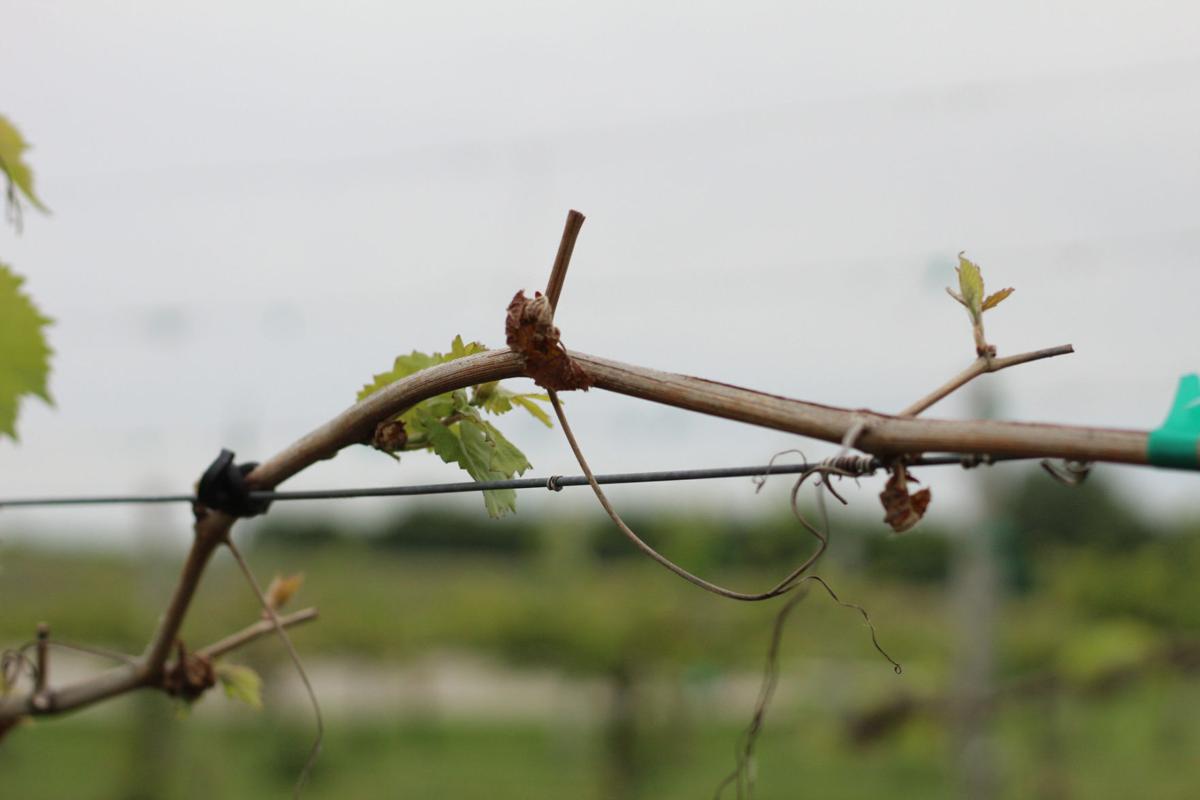 Brianna grape buds dried up on their branch at Spirits of Norway Vineyard, 22200 W. Six Mile Road, Town of Norway. 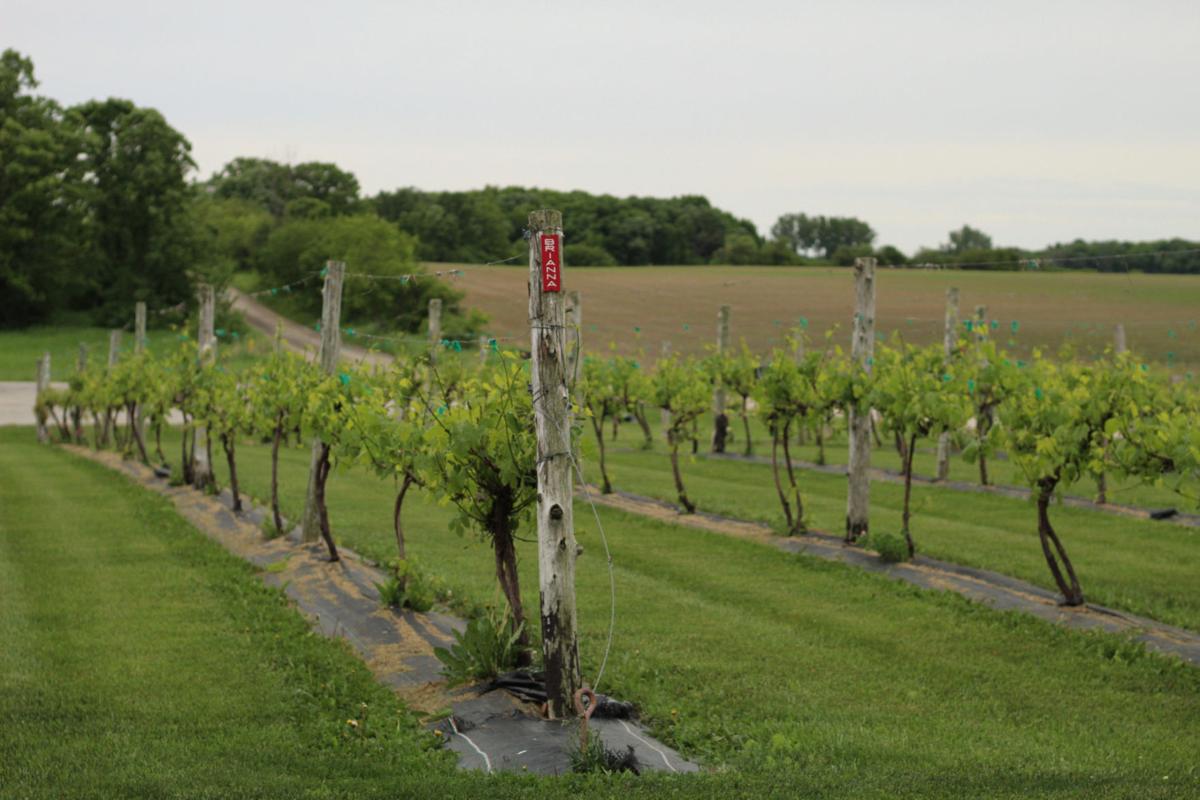 A row of grapevines laid out in the Spirits of Norway Vineyard’s front yard, many of which were damaged in a rare May frost.

TOWN OF NORWAY — “The whole vineyard was covered in frost, it was like something out of the movie ‘Frozen,’ ” said Cindee Henrichs, gesturing to the 2.5-acre front yard full of grapevines.

Just $5 gives you full access for 5 months to exclusive content from The Journal Times and journaltimes.com. The incredible deal won't last lo…

Henrichs and Randy Larson are the owners of the Spirits of Norway Vineyard, 2200 W. Six Mile Road. When temperatures dropped to 32 degrees Fahrenheit in mid-May, the vineyard experienced frost damage for the first time.

“In years past, the weather has dropped to 34 degrees and we’ve never had any problems,” Larson said.

That one temperature drop could have long-term consequences.

According to Larson, the vineyard suffered 30% to 50% overall damage to crops: 25% to 30% of the Frontenac Blanc grapes could be lost, but more than half of the winery’s Marquette grapes might be lost.

What the winery will be selling in 2021 won’t be affected, since the fermentation process occurred over the past winter. This year’s frost damage will cause problems for 2022.

As such, bottle prices for Spirits of Norway Vineyard are expected to increase by about 10% next year. The winery’s bottles currently sell for $16.95, but Larson expects those prices to be about $18.95 in 2022.

At the end of the day, the owners expect to continue satisfying and serving their customers: “We will always make sure we can supply our wine enthusiasts,” Larson said.

Frost wasn’t the only problem

It wasn’t just the frost damage that diminished the grape crops. This year’s strong winds made it worse.

As you walk up and down the rows of grapevines, one branch with a dozen clusters of Marquette grapes is gone. On the other side, buds of Brianna grapes have dried up and turned brown, falling to the ground with just a delicate touch.

When it comes to protecting the crops from future frost damage, Larson said there’s nothing they can do: “It’s just Mother Nature.”

Michael Ballweg, a Sheboygan County crops and soils agriculture agent with the UW Extension, said that farms statewide have experienced a period of light frost and freeze this spring; however, it’s not unprecedented: “It’s a little unusual to get temperatures this low, but this happens periodically every few years.”

These periods of colder temperatures create delicate crops for fruits and plants.

Usually, being so close to Lake Michigan protects the Spirits of Norway crop. “If we were further inland, we would have much bigger losses,” Larson said.

In the winter, water that comes from the lake is warmer than the land, which means the wind that blows from Lake Michigan also becomes warmer and aids the growth of grapes in vineyards. That’s because a warming effect occurs from the water during the colder months that benefits wineries that sit along Lake Michigan.

In other wineries in Wisconsin, such as those farther west in Burlington and even as far as Madison, windmills will be used during harvest season to recreate that moderating effect.

“They use the fans to keep the air moving to minimize frost damage,” Ballweg said.

Reputation of the vineyard

The Spirits of Norway Vineyard has been in the business for nearly 10 years now. It produces about 70 different types of wine, plants a total of 735 grape vines and sells around 3,500 bottles annually.

Its front yard is full of elongated, straight rows of grapevines hung on wires that are propped up by large wooden poles in the ground.

As you walk into their winery building, a rich aroma of wine swarms the room — a fantasy scent for any wine connoisseur.

The winery has a large following, with the support of 25 retail partnerships in liquor and grocery stores sold all over the southeast end of Wisconsin.

Over the years, Spirits of Norway Vineyard has collected numerous awards for their wines, from the Wisconsin State Fair to the INDY International Wine Competition.

“We have a reputation of being well-respected grape growers of the Wisconsin Grape Growing Association,” co-owner Randy Larson said.

Larson and Cindee Henrichs, the other co-owner, host wine and taste test tours two weekends a month. These tours are educational and teach wine tasters what it takes to grow grapes in Wisconsin, as well as the vineyard’s history.

The owners mentioned that they have tours reserved for this weekend and joke they’ll have more to talk about now. “While the frost damage is still visible," Larson said, "people can see that and we’ll be able to point that out to our guests."

What financial pros have to say about inflation fears

What factors are driving these inflation fears? Plenty. Also, check out more of the week's best finance reads from experts at NerdWallet, The Motley Fool and Forbes.

Investing can be difficult, but the 401(k) is one of the easiest ways to start. Many of theses tips focus on small changes, and then you can let stocks do what they do best — go up over time.

3 Secrets to Survive the Next Stock Market Crash

The next stock market crash is inevitable; here are three tips to prosper when it arrives.

Comparing minimum wage to the cost of living in every state

Here's a look at how the minimum wage in your home state compares to the cost of living.

BOSTON (AP) — A software bug at a major network provider briefly knocked dozens of financial institutions, airlines and other companies across the globe offline during peak business hours in Asia.

It has less of an impact than you might think.

Inflation is one of those economic terms most of us know just enough about to be afraid of. We know it erodes our money over time, and that it arrives…

Brianna grape buds dried up on their branch at Spirits of Norway Vineyard, 22200 W. Six Mile Road, Town of Norway.

A row of grapevines laid out in the Spirits of Norway Vineyard’s front yard, many of which were damaged in a rare May frost. 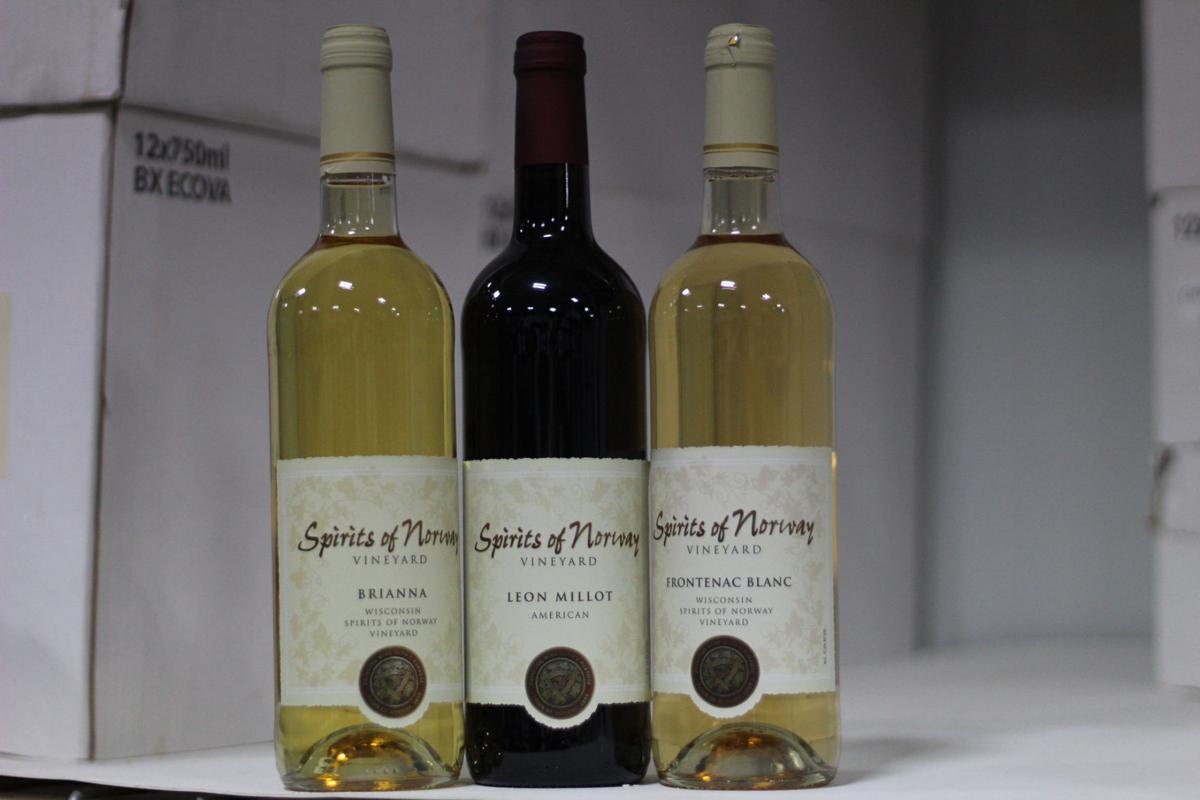 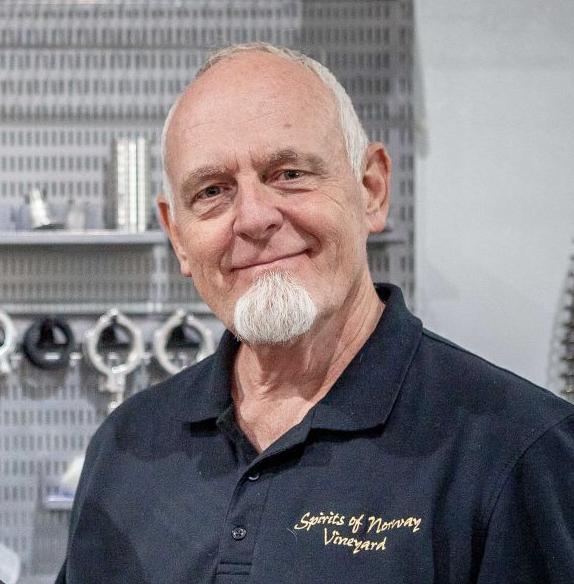