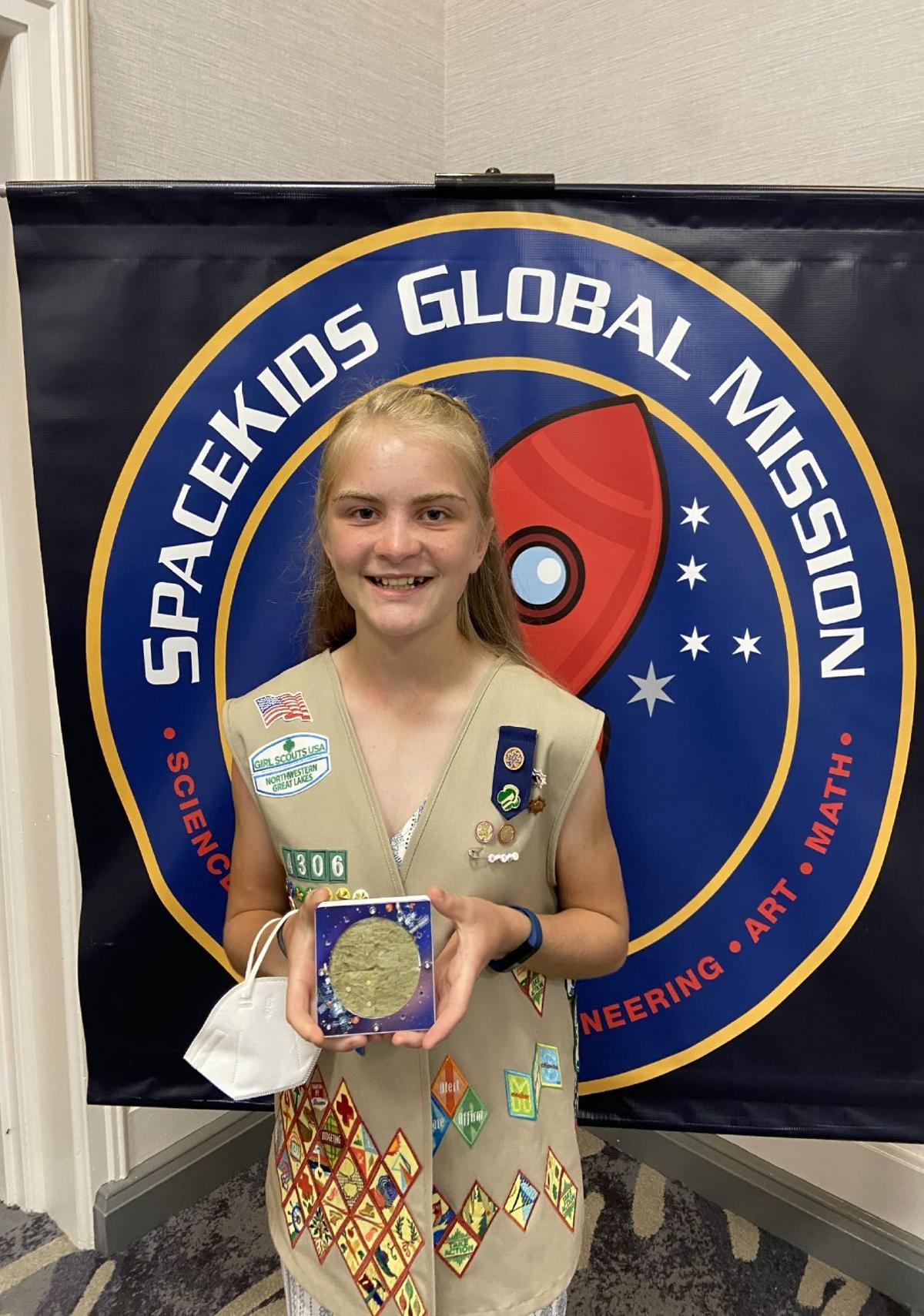 Kayla Murphy of Peshtigo, Wis., stands in front of the mission banner with her experiment, intended to evaluate plant growth patterns in space and zero-gravity environments. 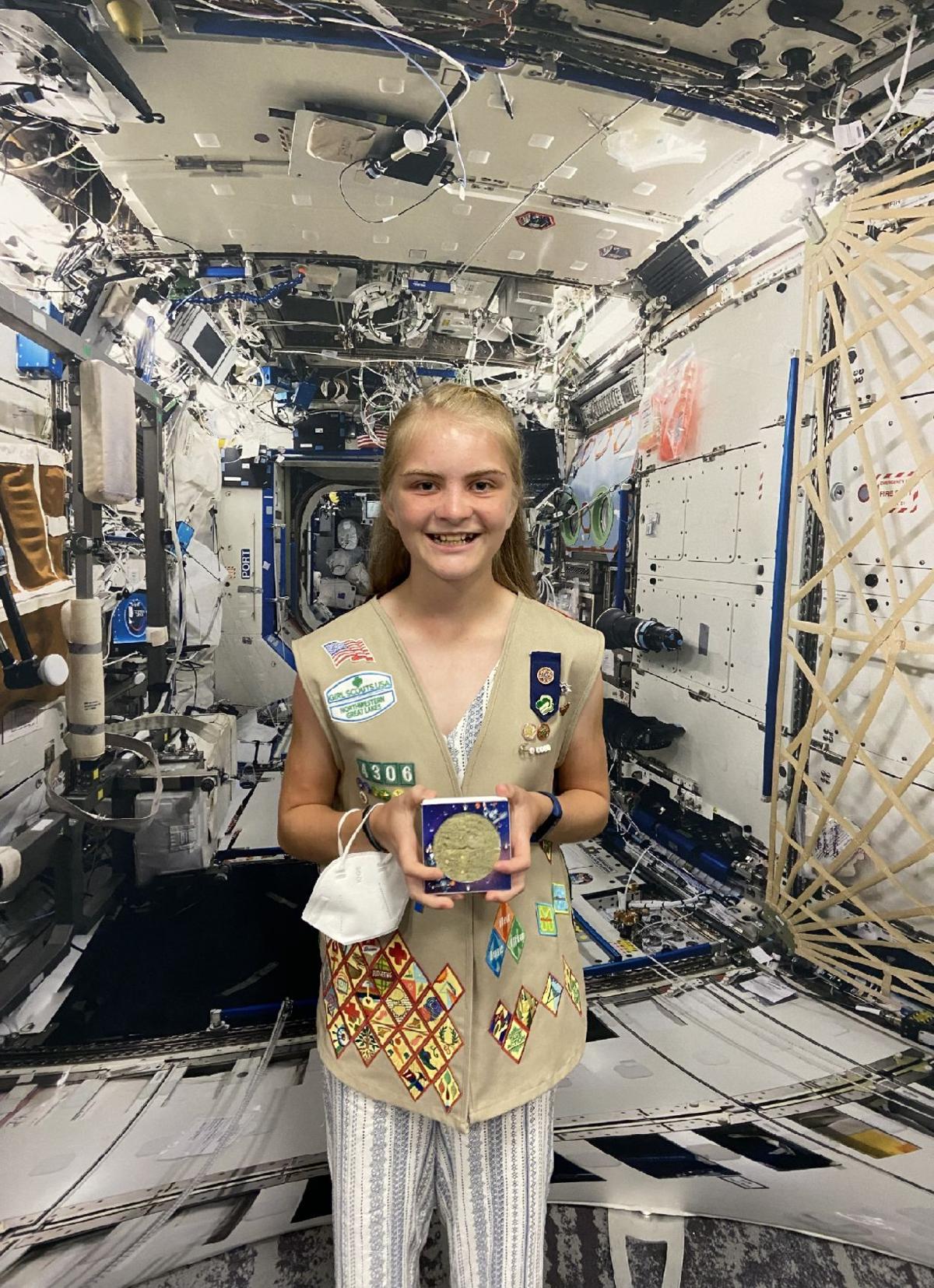 Kayla Murphy of Peshtigo, Wis., stands in front of a recreation of the ISS with her experiment, intended to evaluate plant growth patterns in space and zero-gravity environments.

Kayla Murphy, an eighth-grade student from Peshtigo, Wisconsin, recently saw her idea for an experiment launch into space. She was chosen as one of the winners of the “Making Space for Girls Challenge,” a competition made possible by the partnership of SpaceKids Global and Girl Scouts Citrus Council. On August 28, her experiment departed Kennedy Space Center in the SpaceX launch heading for the International Space Station.

Kayla’s project was intended to evaluate plant growth patterns in space and zero-gravity environments. “I had an idea to grow peppers in space because I grew peppers hanging upside down in a bucket last year and they did better than my peppers in the garden,” she said. This simple observation led to her entering the challenge, and after review by a panel of judges with ties to the space industry, her experiment will run aboard the International Space Station for 30 days while she compares the control experiment back on Earth to the results.

A diverse group of girls participated in this challenge – the first one to be hosted by the partnering organizations. There were 700 entries from across the United States, as well as entries from a few other countries. Participating girls entered ideas and projects into one of three different categories: science experiments, essays, or art.

“Through Girl Scouts, girls experience so many opportunities to transform their ideas into action and grow their confidence through once-in-a-lifetime experiences, and they have fun doing it,” said Patti Shafto-Carlson, CEO for Girl Scouts of the Northwestern Great Lakes. “I loved everything about this experience,” Kayla remarked, “and ended up with some cool patches for my uniform too!”

Two suspects named, one at large, in Dunn County homicide of four

Two suspects in a Dunn County homicide case have been named, with one considered armed and dangerous, and not to be approached.

The Dunn County Emergency Communications Center received a 911 reporting a death in Town of Sheridan in northern Dunn County, September 12, 20…

MENOMONIE, Wis. (AP) — Four people found slain in an abandoned SUV in a western Wisconsin cornfield had been shot and were all from Minnesota,…

Many long-term care staff in Wisconsin reject vaccine, despite risks

Hannah Miller, a nursing student and employee of a long-term care facility in Eau Claire, Wisconsin, received her first dose of the COVID-19 v…

On Sunday, August 15, 2021 at approximately 6:04 am, EMS was requested to a residence in the City of Menomonie for an unresponsive female. The…

Kayla Murphy of Peshtigo, Wis., stands in front of the mission banner with her experiment, intended to evaluate plant growth patterns in space and zero-gravity environments.

Kayla Murphy of Peshtigo, Wis., stands in front of a recreation of the ISS with her experiment, intended to evaluate plant growth patterns in space and zero-gravity environments.