Jacob Miller, the talented draughtsman and artist of this city, has shown the News a series of nine pencil sketches illustrating the tragedy of the killing of the Coleman boys by the Williams desperadoes and the subsequent search for the murderers by citizens of Dunn, Pepin, Pierce and St. Croix counties, in the Eau Galle woods.

Miller was at the time a member of the Ludington Guard and with that troop assisted in the vigorous search with which all our readers are familiar.

The views represent actual scenes sketched on the spot by the artists, and thus possess a charm and naturalness that otherwise would not have been possible. The camp in the woods, the rocks, the meandering brook, the settler’s cabin, the old mill and schoolhouse are all depicted as they actually existed at that time and will readily be recognized by those who participated in the fruitless search.

The views are about 6x8 inches and uniform in size. The series is as yet incomplete, but when finished Mr. Miller will, if he deems it advisable, have the pictures photographed and offered for sale at a reasonable price.

The examination of Ephraim Hoover and Ed. Campbell, charged with robbing Enoch Hoover, was held before ‘Squire Shafer Jan. 20, and resulted in the accused being bound over in bonds to appear at the next term of the circuit court in March.

Hoover secured bail, but Campbell was not so fortunate and now languishes in the county jail.

A large surprise party came to the Tucker Hotel to honor the birthday of Mrs. Heckler, Mrs. Arthur Wilson and Mrs. Captain Wilson being the chief promoters of it. Thirty-five persons were present, Professor Swartz and two ladies from Baldwin, Miss May Kimball and two friends from Knapp were present.

Eight tables were required for card playing, and suitable presents were given to the winners. An excellent supper was provided and all present not only had a good time but said it was one of the most enjoyable parties ever held in Wilson.

The following letter giving further information in regard to Sgt. Dan M. Storing, who died in France May 6, 1918 of pneumonia, has been received by his sister, Mrs. Cora Knoble. It was written by Walter E. Smith of the Y.M.C.A., who is in France.

“My dear Mrs. Knoble. After the brief, sad message of your brother’s death, you will doubtless be longing for more details of his death and burial. Unfortunately I cannot supply much information on his illness except to say that he was sick in one of our hospitals not very far from here, and that he had the best care of doctors and nurses, and was also most likely visited by either minister or secretary of the Y.M.C.A.

“His funeral took place with the usual military escort, here in the beautiful French Cemetery where there is a special plot set aside for the use of the American army and navy. The graves are kept by French ladies who have volunteered for that service, and I am sure you would be grateful to see them planting flowers and otherwise caring for the graves.

You, mourning at home, I can assure you, were not forgotten as we sorrowfully laid away his body in the grave. Believe me most sincerely yours, Walter E. Smith, Y.M.C.A.”

Who will volunteer to take the war off the minds of a thousand or more farmers in attendance that afternoon?

Address a card or letter to J.L.Wenstadt, Menomonie, as soon as possible, and he adds, “a little fun is good for all of us and music has its charm.”

While the war in general has held as the main topic of conversation, the weather came in for its share of attention this week when old-timers tried to remember when and if the community ever had as mils a January as the community is having now. They couldn’t remember any January day as warm as Tuesday. On Tuesday the mercury climbed to 50 degrees above zero, which to date is an unchallenged all-time warm January day.

Wednesday noon the temperature reading was 41. Snow has disappeared, water is covering the ice on the lakes, and some of the frost is coming out of the ground.

Stately elms located along Highway 12 in east Menomonie may be just a memory within a few years.

While that statement may be a bit premature, the possibility exists, according to information presented to Rotarians last Wednesday by Martin Schaeffer of Eau Claire, a district engineer with the State Department of Transportation. He discussed tentative highway programs that are planned through 1975 in Dunn County and one project is the resurfacing of Highway 12 from County Highway E westward.

This work may become part of an urban project in Menomonie which would cause the widening of the highway and removal of the trees.

The birth rate in the area is on the move upward! That’s the report from Ken E. Jensen, assistant administrator at the Memorial Hospital. He says the birth rate at the hospital took a sharp upturn in January when a comparison is made with the same month of ‘68. The hospital has had 24 deliveries compared to 16 a year ago. Included in the 24 were two premature.

Jensen adds another interesting fact: The last 12 babies born at the hospital have all been boys. Veteran employees at the hospital can’t recall a previous happening of this sort.

Members of the public have been specially invited to attend a session of the newly formed Urban Forestry Board at 3 p.m. Thursday at Menomonie Public Library.

Craig Luehrs, urban forestry intern for the city, will give a report on the kinds of street trees in the city, their value and the problems they are facing.

“I think urban forestry is a big part of people’s lives in the city,” Luehrs said. “People receive many benefits from urban forestry that they are not aware of, like cleaner air, reduced noise pollution, aesthetics that make them feel better. The value of trees is a lot more than people think.”

“These benefits would be missed if the forest was lost now, Menomonie’s street trees are worth $3 million. This does not include parks and privately owned trees, which make up a lot more.” Luehrs said.

The board has established a goal of promoting the urban forest and green space throughout the community that has aesthetic quality, ecological benefit and is responsibly maintained.

Dale King was surprised when he heard the news. The maintenance supervisor at Cardinal FG in Menomonie considers himself a good boss. But a patriot? SSG Kevin Kadinger of Colfax saw the special quality in his boss—the willingness King had to support his service in the Army National Guard.

So Kadinger nominated King for one of a civilian employer’s greatest honors, the “My Boss is a Patriot” Award.

He eventually became a finalist for the award and recently the Eau Claire National Guard presented the award to King and Cardinal FG.

King and Cardinal FG are being honored for their support of employees called up for extended active duty in the Guard or Reserve following the terrorist attacks of Sept. 11, 2001. The “My Boss is a Patriot” certificate acknowledges the sustained support that goes beyond the requirements of federal law USC Title 38 and USERRA (Uniformed Services Employment and Reemployment Rights Act).

King says he feels that it’s his duty to accommodate Kadinger’s service time, even though it can be a challenge to make sure the Cardinal FG plant is covered with the necessary maintenance crews. But King says he always does what it takes to make sure Kadinger gets his time off.

“Military people are important to this country, and we need them,” King said.

In a unanimous vote, the city council of Menomonie approved a state-municipal agreement for a highway improvement project.

After the State Department of Transportation finalizes preliminary plans, construction will begin on the 1-94 overpass on Stokke Parkway. The bridge connects residential zones and industrial zones, like Badger Iron Works, with the east side of the city of Menomonie.

The total cost of the project is estimated at just over $2 million, all of which will come from state and federal coffers.

The improvement is part of a ongoing state effort to improve infrastructure, as seen by the prior replacement of bridges along I-94. Menomonie Director of Public Works Randy Eide said the city will have to reposition some water hydrants and a storm sewer manhole at its expense and will do so within its existing budget.

The need for such a project may be seen in an economic study about I-94 completed by the Wisconsin Department of Transportation in 2005.

Its recorded counts for daily traffic volumes leveled at 20,000 west of the U.S. Highway 53 intersection, and 67,300 at the Minnesota-Wisconsin border, with around 21 percent being freight vehicles.

The inconvenience of a detour will be compensated by what Eide refers to as a “ safer roadway.” The new overpass will be widened to 36 feet, and include a 10-bike path.

Leaving behind all one knows a is the familiar refrain of the pioneer, but for an explorer of Mars, that’s one that has some different connotations.

Mars One is a not-for-profit foundation seeking “right stuff” crew members to establish a colony on the red planet. From a a field of more than 200,000 applicants, former Menomonie resident Paul Larsen has been selected for further consideration. He is one of 1,058 candidates entering the final selection phase to be a participant in the starting of this “brand new world” settlement.

Larsen graduated from St. Cloud State University in 2012 with a bachelor’s degree in earth science.

Since then, he has served an internship with NASA at the National Space Science Technical Center in Hunter, Ala.

“I want to be the coolest science teacher from out of this world,” Larsen declared. “I want to excite young people, because it is the young people now who will be solving the problems of the future. There are problems out there that we do not yet even know exist, and science is the thing that the answers will come by.”

It is also a recommended site for simply understanding in more detail the plausibility of Larson’s dream to become a truly “out-of this-world” teacher. 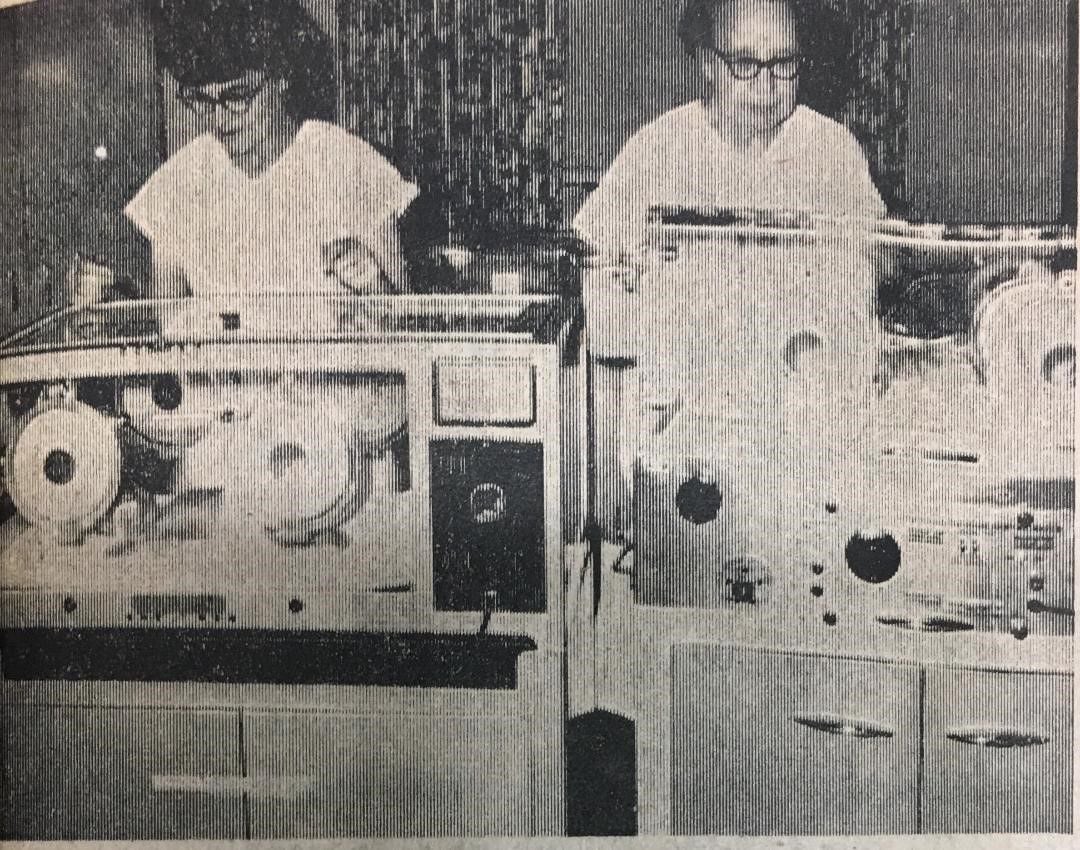 Mrs. Ruth Schultz, left, and Mrs. Hazel Bauerkemper are shown in the Memorial Hospital nursery department monitoring incubators which are the current homes of two infants.