Live: Gov. Tony Evers provides an update on the Wisconsin response to the COVID-19 pandemic

From the Files: Dunn County establishes DDT collection station in 1970
0 comments
Share this
×

At Bracklin’s lumber camp in Barron county, Peter Larson, an employee of The K.S. & Co. Company, was struck on the head by a falling limb and instantly killed. The body was brought to this city and will be buried to-day (Friday). The deceased was a young man and had been in this country but little more than a year. He leaves a wife who was confined about a week ago and is too sick too even be allowed to see the body of her dead husband.

Jorgen Arntsen, another employee of the Company, near Prairie Farm, was killed last week. He was a single man and made his home in this city.

John Scheibe and a number of the other boys returned from the woods the present week, all appearing as though they got enough to eat during the winter.

The Water Works. The purchase of the water works is purely a business proposition and should be fully understood by every voter. The value fixed by the appraisers is $75,000. The contract with the water works company has twenty more years to run. During the past year the receipts from private consumers paid the expenses of operating the plant. Let us assume that they will pay the annual expenses in the years to come. The interest on $75,000 at 5 per cent is $3,750. That is what the purchase money would cost us each year. In twenty years this city would have paid $75,000 as interest. The city now pays $5,500 annually for hydrant rentals. In twenty years these rentals will amount to $110,000. This shows a clear savings to the city of $35,000 in the twenty years- an average of $1,750 a year. This is one view of the question that appeals strongly in favor of the purchase.

Shriners Organize Club. First in this section outside of the large cities-Harvey at head. Members of the Mystic Shrine residing in Menomonie met at the Masonic Temple Monday and organized the Menomonie Shriners’ club. Seventeen members are enrolled with L.D. Harvey president and Oscar Wilson, secretary. One of the qualifications necessary for membership in the Shrine is that one be a Knight Templar or a Thirty-Second degree Mason, so all the Shriners are Masons. Arrangements are now being made for a banquet to be attended by all members of the club and their ladies, which will be served at the Masonic Temple. Menomonie has the first organization of the kind in this section, outside the large cities. While the benefits from the club are largely social, the Shrine organizations throughout the country do a great deal of work along the charitable lines. They strive in every way to have their members look upon the bright side of life, which is so essential to well-being.

Sell Flour Mill Building to Otto Edgeberg. The flour mill and elevator of the Wisconsin Milling Company have been sold to Otto Edgeberg, announces E. Oliver Wright, president and general manager of the Wisconsin Milling company, which ceased operation of the flour mill in late February, has until May 1 to remove the machinery and other equipment. Some of the machinery has already been taken out and the rest will be removed as rapidly as possible.

Besides disposing of its flour mill building and elevator to Mr. Edgeberg the Wisconsin Milling Company has sold the land on which these buildings are located and its water power rights to the Northern States Power Co. The land in the transaction is an irregular tract, with an area about equal to a city block.

The flour mill is one of Menomonie’s landmarks. Knapp, Stout & Co. built the original mill in 1857. In 1906 the Wisconsin Milling company took over the property and the building was greatly enlarged and its capacity increased.

It was about a month ago that Mr. Wright announced the closing of the flour mill as a result of changing economic conditions.

The use of DDT is banned under a new state law and stocks of the material now on hand throughout the state must be disposed of. The Department of Natural Resources is the official collection agency for the insecticide.

Individual consumers who have partially used containers of DDT powders, liquids and sprays on hand should bring them to the DNR station. They will be carefully sorted pending final disposition.

Under no circumstances should DDT compounds be dumped into public or private sewer systems, thrown out with other trash, or burned, as none of these methods will prevent contamination of air, water or soil.

Retail dealers with large DDT stocks on hand are urged to return supplies through their wholesale sources.

All Department of Natural Resources stations and personnel are ready to give assistance to the public in disposing of DDT and will accept it for transfer to designated collection stations.

The 801-817 South Broadway site was once occupied by two buildings used as saloons. These buildings burned and the lots were purchased by Mr. Wolff, who came to Menomonie in April 1905.

In June 1905, he started building the greenhouse. He married in October 1906, and the couple operated the business until July 1, 1945, when they sold the firm to Mr. and Mrs. Emil A. Sneen.

The business was purchased in 1947 by Don and Eleanor Jenny and they operated the firm until June 1979 when they sold to Al and Joanne Gluck.

The 801-817 South Broadway site was purchased by the State of Wisconsin for UW Stout expansion and in October 1983 the business was moved by the Glucks to 633 South Broadway. This building had been occupied by Cirkl Sheet Metal and fabric Store.

Harlan named Coach-of-the-Year. UW-Stout women’s track coach Joe Harlan was named the Midwest Region coach of the year by the United States Track Coaches Association (USTCA) recently. Harlan has overseen a building process in the Stout women’s track and field program that has seen the Blue Devils go from a perennially seventh place conference finish to a fourth place finish this season in the Wisconsin International collegiate Athletic Conference (WIAC). That fourth place finish was the highest placing ever by a Stout women’s track team. Harlan, in his fifth year, took over a program that had only 15 team members and had built the roster to more than 40 athletes. In his five years, Harlan has coached two national championships and four athletes that have produced a total of 18 All-America awards.

Stout placed 11th at the 2005 NCAA Division III Indoor Track and Field Championships. The Blue Devils placed fifth at the 2004 indoor championships. Harlan is also the Stout women’s cross country coach and is an instructor in the department of physical education.

A core server was compromised as outside forces attempted to set up a large downloading site within the system. Since the server was administrative in nature with only privileged access, the determination was to isolate the core servers from the Stout network.

“We shut it down and cleaned everything up,” Stout Chief Information Officer Douglas Wahl said. “These people were not targeting IDs or any other information. Nobody needs to worry about that.”

Wahl said all services were up and operational without loss by 10 p.m. on Friday. Wahl also indicated that part of the problem was the fact that a piece of Norton anti-virus software being used by Stout was not up to date.

State patrol to honor crash victim for wearing helmet. A Menomonie woman can be glad she was wearing a helmet when she was thrown from a motorcycle following an encounter with a deer. Because her head was protected, the only injuries she received were of the non-life threatening sort. Jennie R. Haviland, 44, has been nominated by the Wisconsin State Patrol to receive a “Saved by the Motorcycle Helmet ‘’ award from the Wisconsin Information Network for Safety and the state’s Department of Transportation’s Bureau of Transportation Safety. The driver of the 2003 Harley Davidson FLHT Classic motorcycle, however, didn’t fare so well following the crash that took place shortly before 6:30 p.m. on Saturday. Haviland and Charles L. Hegna, 44, also of Menomonie, were driving eastbound on State Highway 48 when Hegna- who was not wearing a helmet-struck a deer, lost control of the cycle and skidded on the road. Both were transported to Cumberland Regional Health care by ambulance. Suffering from a head injury, Hegna was flown to Regions Hospital in St.Paul, Minn. The crash remains under investigation by the Wisconsin State Patrol.

Traffic stop in Boyceville leads to arrest, seizure of more than 100 grams of meth

A traffic stop in Boyceville has led the arrest of one adult male and the seizure of methamphetamine, the Dunn County Sheriff's Department sai…

The study analyzes phone GPS location data to measure the extent to which Americans are social distancing.

6 candidates running for 3 seats on Menomonie school board

Six candidates are vying for three seats on the Menomonie school board in next week’s spring election.

Schools are a center for the community.

From the Files: Landmark flour mill transformed into turkey processing plant in 1945

Dunn County is focused on preventing continued spread of COVID-19.

Dunn County is focused on preventing continued spread of COVID-19.

The COVID-19 public health emergency is creating an urgent food security challenge for households and communities in Wisconsin. Even before th…

Dunn County has its second confirmed case of COVID-19. 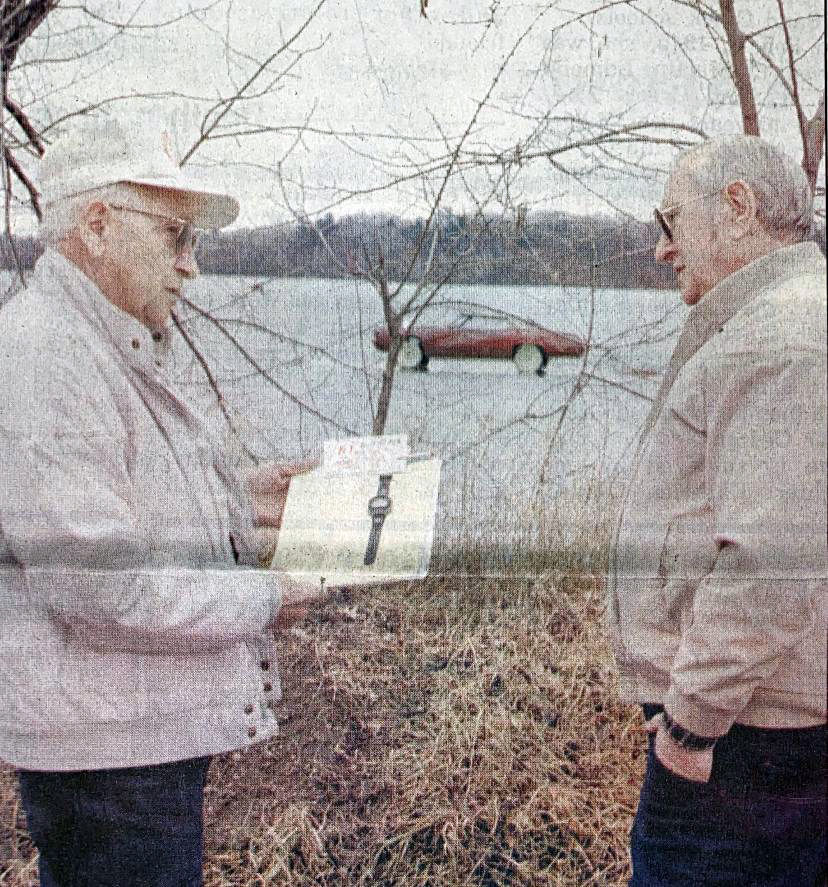 Wednesday, March 22, 1995: Murrell Price and Howard Buss take their turn Monday for one of the rotating two hour shifts at the Lion’s Club “Klunker on Ice.” Members pass on the record sheet and the watch so the time that the car sinks into the chilly waters of Lake Menomin will be “official.” As of press time on Tuesday night-the car was still above water and the watchers were still waiting. The Lions sell raffle tickets and purchasers make a guess when the Klunker will take a dunk.