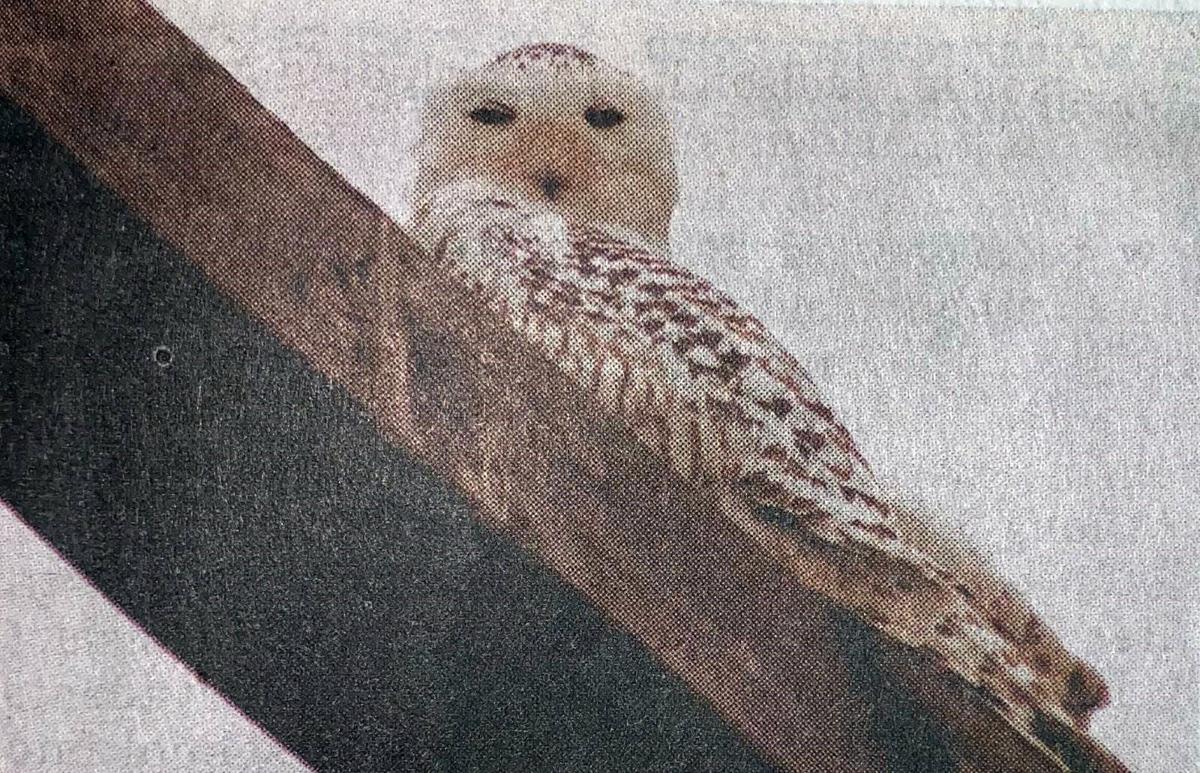 Sunday, Jan. 4, 2015: Here’s Looking At You. About this rare shot, photographer Jen Grant explains: “It was Christmas Eve, and I was out near Highway B in Menomonie. There were some folks with a camera, and I just couldn’t figure out what they were taking pictures of. I looked up and a snowy owl as right above me, within 15 feet.”

H.W. Scott, was down from the pinery Christmas, reporting operations at McDougald’s camp as lively and promising a big season’s cut. Two million feet have already been cut.

A snow-storm Tuesday night was the heaviest of the season. About eight inches of the “beautiful” fell, which the brisk wind piled in drifts several feet high in many places.

Comfort and happiness have come to dwell in the home of another old veteran. John Nauman of Tiffany, who served during the alleged late unpleasantness in the 104th Penn. Inf. has had his application for pension allowed at $4 per month and last Saturday received back pay amounting to $938.67. The money came just in time to enable him to raise the mortgage that shadowed his home like a cloud.

Thursday afternoon Mrs. W.A. Clark and Mrs. Robt Macauley gave a one o’clock luncheon at the Clark home, corner of Eleventh and Elizabeth streets. The window shades were drawn and the dining room lighted artificially, which in connection with the bright costumes of the ladies constituted a blithe and spirited scene. Later, a contest in deciphering suggestive titles of books was engaged in, Mrs. D.H. Decker as the most successful contestant being awarded the prize. It was a pretty and enjoyable social diversion.

Miss True’s juvenile dancing class gave a masque ball, Thursday ev’g, which attracted a large audience composed of parents, brothers and sisters of the maskers. The costumes were as a rule attractive, many of them, indeed being decidedly pretty and dainty. A committee of disinterested outsiders awarded the prizes for the best and prettiest costumes, as follows: Miss Ida Tonnar, as Cupid; Carl Lucas, Red Riding Hood; Ray Cook as Sailor Boy; Frank Bunker as a dude.

Police Investigating Death of Husband of Menomonie Woman. Mrs. Herman Genrich is in Chicago, where she was called by the sudden death of her brother-in-law, Charles H. Passage, desiring to be with her sister during the trying ordeal. Foul play is suspected in the case. Mrs. Passage was formerly Miss Emily Buss. On Saturday, Dec. 27, Mr. Passage was found mortally injured on the railroad tracks two blocks from his home. It is supposed he was hurt on his way home from work. From 6:40 p.m., when he was found, until 1 a.m., he lingered in a hospital to which he was taken, passing away at the latter hour. Mr. Passage was auditor in a railroad office. The cause of death has not been determined, and it is not known whether he was murdered or was struck by a passing train in the yards. A coroner’s inquest was held and the police are investigating. The funeral was held the following Wednesday.

DAV Party Brings Christmas Cheer. The Disabled American Veterans and its Woman’s Auxiliary held their annual Christmas party Wednesday night, Dec 27 at the Legion club rooms with 60 merrymakers present. The youngsters gathered around the piano, singing Christmas carols, and popular songs, and delighted the gathering with solos and duets. Perry’s orchestra was on hand to add much to the enjoyment of old and young. Apples, peanuts, nuts and candy were distributed, and after the whole gang sang, Hail, Hail the Gangs All Here, everyone had their fill of hot dogs and pie ala mode. Several service men home on furlough and discharged service men were present.

One day after the New Year made its grand bow Old Man Winter, not to be outdone by the New Year babe, made a icy entry into this section on Tuesday morning. And the result was a 12 below zero thermometer reading Tuesday morning, between 8:20 and 9:45 o’clock, to register the coldest mark of the winter. This reading was taken from the accurate inside recording thermometer at the Stout Institute. Some other thermometers registered as much as 19 degrees below.

Recycling sets off mighty howl. The phones were ringing off the wall at Chad Haas’ Solid Waste office in the Dunn County Courthouse Tuesday morning. Joann Petersen’s Menomonie Disposal office on 13th Avenue West was just as hectic. “It’s just nuts,” said Haas, about the quantity of calls Tuesday morning. People are confused about what to do, said Petersen, with the start of mandatory recycling in Wisconsin on Jan. 1. “I tell them to sort it out the best they can this time,” Petersen said. “After this they have to be aware of the ten items that have to be recycled.” Most of Haas’ calls have been on the subject of clear trash bags, and fear that haulers will not pick up trash if it is in black bags.

“People have had time to learn. The law is very simple,” Haas said. As for the clear bags, Lammer’s, Doug’s Super Fair Foods and Don’s Super Valu all have a good supply, of the large clear plastic trash bags, managers say.

Andy Lamb was officially sworn in as 29th Assembly District representative in ceremonies Monday at the State Capitol in Madison. On Thursday evening, Lamb was also sworn in by Dunn County Circuit Judge Rod Smeltzer at a gathering of friends and family at the Spring Valley Elementary School. At the Spring Valley event, emcee Chuck Stokke said, “Happy days are here again,” referring to the fact that Lamb is the first Republican since 1981 to represent the 29th Assembly District, which includes the City of Menomonie and the townships of Menomonie, Lucas and Stanton in Dunn County. Lamb said that he is “excited to get started” on his two-year term in the State Assembly.

Lamb was born and raised on a dairy farm just outside Spring Valley and graduated from Spring Valley High School in 1992. He worked for Northtown Ford in Menomonie for seven years, including the last five as general sales manager. He resigned the position on s July 1 to run for the State Assembly. At Thursday night’s event at Spring Valley, Lamb gave credit to his parents, Chuck and Barb Lamb, for teaching him the value of hard work and smiling.

Menomonie Area Bread for the World (BFW) had several successes in 2009 in stopping hunger. With the involvement of many area citizens, it helped hungry people locally, nationally and internationally.

What’s in a name? Ask Jaxson, Oliver and Mason. Or Evelyn, Nora and Ella. Those names topped the lists of babies born at Mayo Clinic Health System locations in northwest Wisconsin.

As of Dec. 30, Menomonie and Barron each saw one set of twins born. Of the 324 babies born in Menomonie, the genders were evenly represented with 162 each of girls and boys. In Barron, 102 babies were born — 47 girls, 55 boys, while in Eau Claire, 15 sets of twins were welcomed into the world among the 1,019 babies born — 517 girls, 502 boys. Here’s the rundown of the top boy and girl names at each Mayo site. Specific spellings may vary, and quite a few names tied in popularity.

In Barron, the top girl names were Evelyn and Harper, with a four-way tie among Jaxson, Kaiden, Matthew and William. The clear favorite in Eau Claire for boys was Oliver (8) and Nora (10) for girls. Second place for boys was split between Colton and Wyatt at seven apiece, while six each were dubbed Grayson, Henry, Jackson, Liam and Nolan. The second most popular girls names in Eau Claire with eight each were Adalyn, Aubree, Olivia and Isabella, while the third place spot was divided between Abigail and Evelyn at seven apiece.