Otter Creek- The house occupied by Chas. Isted on the McGillis farm caught fire and before it was discovered, was burning in three places. It destroyed one bed, burned through one door and a hole through the roof 8 feet long and 4 feet wide. At the same time Mrs. Isted lay sick in bed and unable to move. After an hour’s hard work by the occupants of the house the fire was put out.

Twenty-five boxes of Frank Siddalls soap just received at The K.S. & Co’s. For sale by the cake or box.

W.H Tuthill’s cows ate fifteen pounds of white lead the other day and is now in about the same condition as the democratic party with Cleveland administration-she has an awful load on her stomach.

Mrs. W.O. and Miss Helen M Waterston, have rented the Hardy residence on Wilson avenue, where they will open up a first-class dressmaking establishment, upon their return from St. Paul, about April 15. They are young women of ability, and we trust the ladies of Menomonie will give them a share of their patronage.

Knapp- Saturday night our town was left in total darkness owing to an army balloon crashing into the wires as it fell to earth in the late afternoon near Hudson. As the balloon struck the wires the current instantly burned out two generators of the Burkhardt Power & Milling company and the towns dependent on this company for light will be left in darkness for about ten days. The balloon was from Ft. Sills, Okla., manned by four men who were making a flight in an effort to break balloon records. Everything went well with them until they reached Minnesota, where they encountered a 40-50 mile gale.

They intended to land in the outskirts of Minneapolis, but the gale carried them over the Mississippi river. They came so near the earth that a grappling hook hanging from the balloon caught in telephone and power wires and they came crashing down. The men were scratched and bruised but not seriously hurt and confident they had made a record flight.

The damage done to the Burkhardt Power & Milling company is estimated at $25,000.

Flour mill will become turkey processing plant. By midsummer the flour mill, one of Menomonie’s landmarks, will be transformed into a turkey processing plant, states Otto E. Edgeberg, new owner of the building that he purchased recently from the Wisconsin Milling Company. The two lower floors will be devoted to the processing plant, while on the two upper floors a hatchery for turkey eggs only will be operated. Installation of equipment is to begin as soon as the mill machinery is removed. By August the processing plant will be in readiness for operation, to take care of turkeys from flocks within a radius of 50 miles of Menomonie, as well as the 15,000 turkeys that will be raised on the Edgeberg turkey farm near Dunnville this year. Included in the equipment of the processing plant are a freezer that will have a capacity of 1,500 turkeys a day; a wing-picking machine and two large coolers to facilitate quick freezing overnight. In addition to all this, the plant is to have a small quickton, where the best turkey eggs, produced under ideal conditions, come from. With the plans in the making for the Edgeberg processing plant and hatchery, Menomonie is on the way to becoming the turkey center for this part of the country.

Miss Menomonie will be crowned Saturday. Nine lovely and talented finalists are participating in extensive rehearsals this week in preparation for the Miss Menomonie pageant. Miss Sharon Singstock, Miss Wisconsin in 1965 and fourth runner up in the Miss America pageant, will be the mistress of ceremonies.

All nine finalists will be competing in swim suit, evening gown and talent. The judges will have the difficult task of selecting one of the girls to represent Menomonie in the Miss Wisconsin pageant in Oshkosh in June.

The program will conclude with the farewell march of Miss Sherry Thompson, the reigning Miss Menomonie, and the coronation of the 1970 Miss Menomonie. This is the first year the Miss Menomonie pageant is an official Miss America preliminary. All contestants are required to follow certain rules and regulations and meet requirements established by contest officials in Atlantic City.

A total of 118 alumni participated in the three day tournament, which was started by Steve Schrantz and Gene Hatfield in 1983. The Menomonie Booster Club sponsored this year’s tournament and $1,300 was raised to support local athletics.

Fourteen teams played a total of 20 games. In the opening rounds, teams were seeded in a single bracket with two of the teams getting first-round byes.

‘Super Size Me’ and director come to UW Stout.

Morgan Spurlock, award winning writer, director, producer and guinea pig of “Super Size Me,” a feature film that explores the obesity epidemic in America, will speak April 15, in the Great Hall of University of Wisconsin-Stout’s Memorial Student Center.

During the making of the film, Spurlock subjected himself to a grueling 30 day “McDonald’s Only” diet to document the impact on his health. As well as documenting his own burger-fueled bulk-up, the film takes a tongue-in-cheek and “burger-in-hand” look at the legal, financial and physical costs of America’s hunger for fast food.

For his efforts, Spurlock was honored with the Best Director Award in Documentary Competition at the 2004 Sundance Film Festival, and an Academy Award nomination in February 2005 for Best Documentary Feature.

Dog, owners rescued from ice on Tainter. One rescue attempt led to another early Sunday afternoon. It was shortly after noon that the Dunn County Communications Center received a report about an elderly couple who went through the ice on Tainter Lake as they attempted to rescue their dog. Just as responders arrived at the scene, the couple managed to get themselves back into the boat they had on the ice. Although wet and stuck on the ice in their craft, the pair’s biggest concern was for their rescuers to save their dog.

Dunn County deputies, along with the Menomonie Fire and Rescue and Wisconsin Dept. of Natural Resources officers responded to the scene.

According to a news release from the Dunn County Sheriff’s Department, rescuers commandeered a nearby canoe and were able to chop through the ice to get to the couples boat. Tying a rope to the boat, they were able to pull the couple to safety. Donning cold water rescue suits, Menomonie Fire personnel used the canoe to return to where the dog was struggling to keep its head above water. Exhausted, the animal was unable to move once he was pulled from the icy water. Sheriff Dennis Smith reports that after a warm bath, “All are well and resting at home tonight.”

Burning clears way for new growth. The prescribed fire conducted by the Menomonie Fire Department on the lake bank behind the Menomonie Public Library on Wednesday morning was done as the first step in creating a prairie consisting of native plants.

The intent was to eliminate the tall grass, known as Pampas grass, which was growing on the north end of the burned area. While quite aesthetically appealing, Pampas grass has a tendency to aggressively invade the landscape and become the dominant plant species.

Burning exposes raw soil, allowing the new growth. Burning also sets back the growth of woody vegetation on the site. These actions prepare the site for seeding a variety of native grasses such as Big Blue Stem, Switch Grass, Indian Grass and Little Blue Stem. These efforts will help demonstrate the beauty of our native plant communities and aid in our efforts to entice purple martins to nest in the colony nesting boxes located on the library grounds.

A Menomonie summer staple will be returning in a smaller fashion. 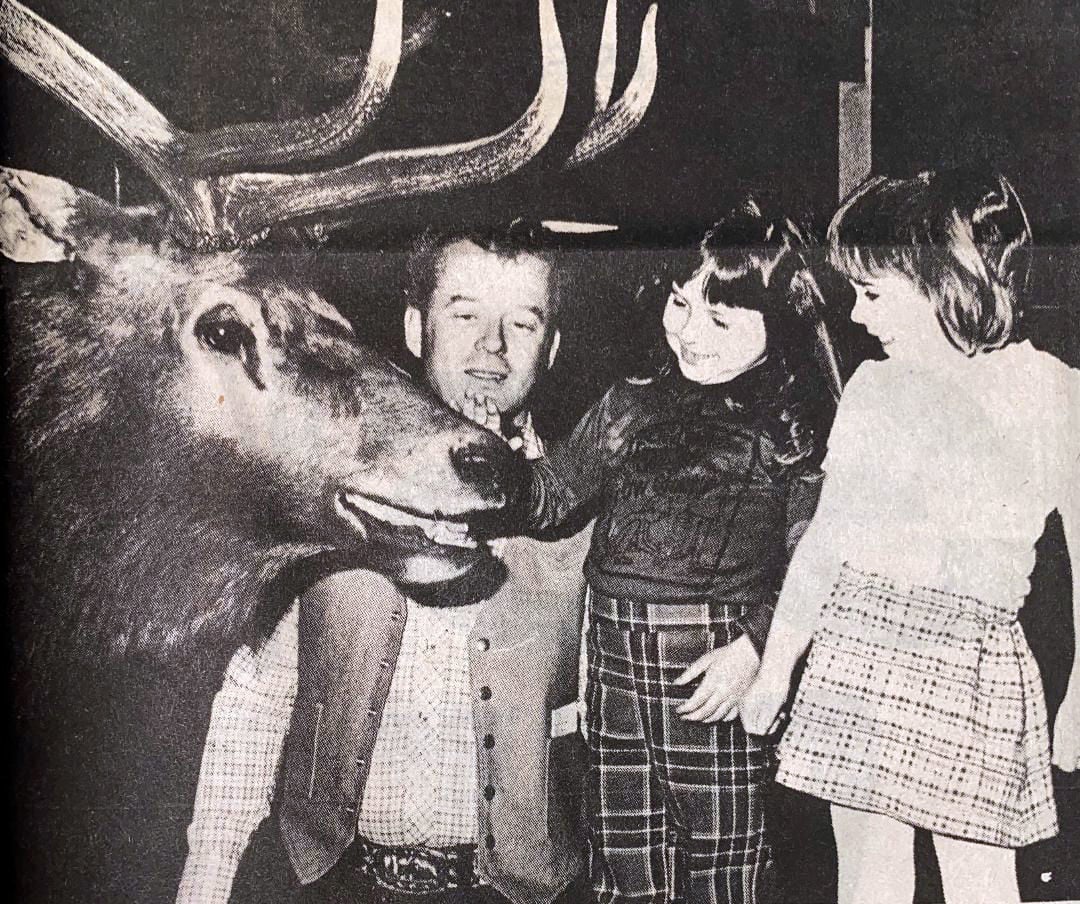 Wednesday, April 4, 1979: “Nice Elkie” Children of the UW-Stout Child and Family Study Center got a chance to observe mounted species of wildlife first hand during a tour of the T and T Wildlife, Inc., exhibit at Thunderbird Mall last week. Tina Boyd, 5, daughter of Mr. and Mrs. Jim Boyd, and Ellen Phillips,4, daughter of Mr. and Mrs. Tom Phillips, petted a stuffed giant Elk on the nose while Tom Thur, one of the proprietors of the exhibit, looked on. Thunderbird Mall merchants invited area schools from the county to come and tour the exhibit which is valued in excess of $300,000.