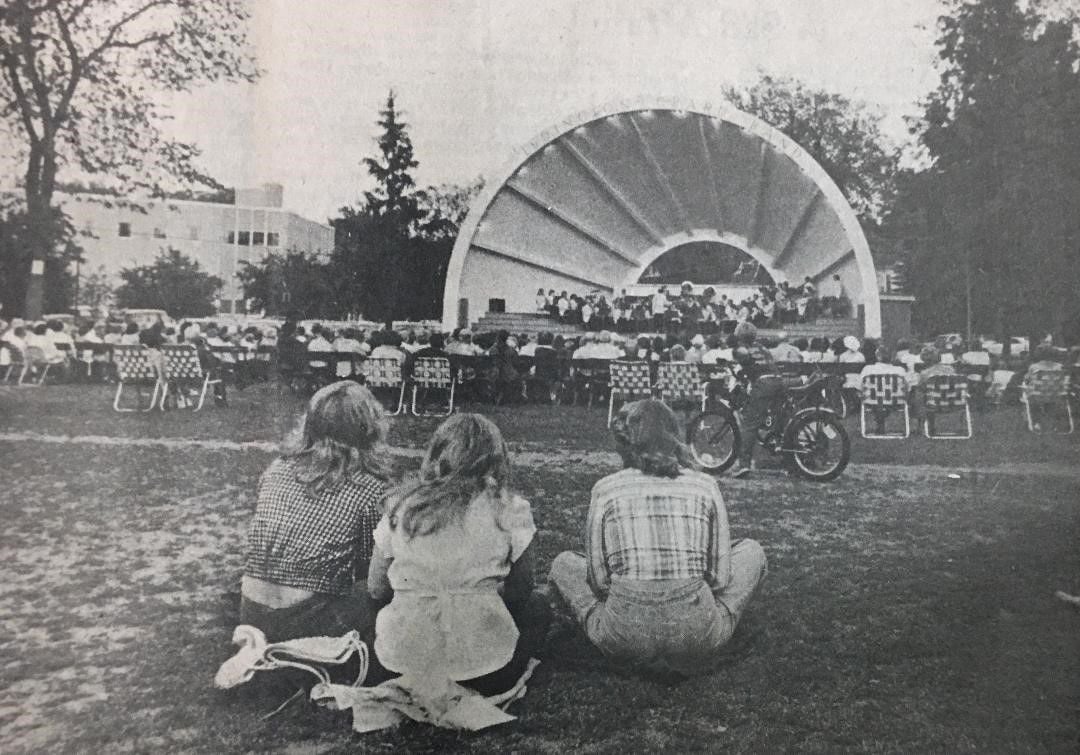 Wednesday, June 22, 1977: Ludington Guard Band concerts at the Wilson Park bandshell attracts people of all ages for miles around. Here three members of the audience relax on the lawn while others sit on folding chairs behind the park benches provided by the city. The city refurbished the band shell this spring and it looks brand new.

Eau Galle—The Weinzirls lost a very fine fat steer Monday. They were driving to Durand and it became over-heated and died.

A man whose name was unknown to us came near being drowned in the Red Cedar river at the ford near Colfax, one day last week. The buggy in which he was riding was overturned he being thrown into the river.

He managed to save himself, however, but his valise containing money and papers was lost. It was a narrow escape.

Unless our city authorities adopt vigorous and thorough preventive measures that dread disease diphtheria, will gain such a foothold in our city this summer as to devastate many a happy home and fill many a little grave in Evergreen Cemetery next winter.

The State Board of Health recommends certain carefully prepared measures which ought to be rigidly enforced here.

There is going to be a change at Menomonie, in connection with Knapp, Stout & Co. Company, which the many friends of the genial Pete Wilson will be sorry to hear because it will mean that they will probably lose him soon.

Pete Wilson is the son of T.B. Wilson and the father is the exact image of the son with some 25 years added to his age, in my opinion.

He has of late years superintended the manufacturing and the hiring of the men at Menomonie, but in a few weeks, according to present plans will go to Leeper, Mo, where Knapp, Stout & Co. Company put up a big saw mill, and will hereafter have the entire management of that concern.

Pete Wilson is a good lumberman, shrewd, and sharp as a knife and if he does not make the Leeper mill one of the best paying mills of the company, it will be funny.

As to whether he will reside there permanently or not, he has yet to decide, but I know well that the good people of Menomonie will hate to see him move away from there.

Colfax—While on his regular rounds last Friday afternoon, delivering ice to customers of the Braaten Dry Line, Will Russell had the misfortune to drop a cake of ice in such a manner that both of his feet were crushed so badly that it was thought best to remove him to a hospital.

He was taken by auto at once to Eau Claire, where he had been cared for, and hopes are entertained that he may soon be able to return home.

While Mrs. William Cook was washing last Wednesday with the washing machine attached to the gasoline engine and the wringer running, Gertrude, the five year old granddaughter of Mrs. Cook , in some way got her hand in the wringer and it was carried through as far as the elbow.

A serious and painful wound was inflicted, the skin being torn from the flesh and one of the bones fractured. It was cared for by a physician and she is doing nicely.

“Step right up folks, free gasoline, all you want and no coupons to bother about.”

That may sound like a lot of nonsense, but it just about completely describes the situation on State Highway 25, five miles south of Ridgeland Tuesday.

It all came about when an Indian Head Truck Line gasoline loaded truck of St. Paul tipped over alongside the highway that morning about 7:30.

The truck, loaded with 4,150 gallons of good gasoline, tipped over after the steering connection rod became disconnected and the truck got out of control of the driver who was not injured. About half the gasoline was saved.

The other half either leaked onto the ground and soaked into it, or was caught in containers of various kinds by passersby, who did all they could to see that no gasoline was wasted—and that they got all they could.

It is reported some individuals “caught” as much as 90 gallons of gasoline, which will help them stretch their supply of gas coupons for some time.

Six members of the Menomonie High class of ‘69 were awarded Wisconsin Honor scholarships ranging in value from $100 to $800 at the annual Awards Day program last Wednesday.

This award was established in memory of Constance J. LaVoie, a long-time elementary teacher in the Menomonie system, and is granted to a

senior who will pursue a BS degree in elementary education.

A $100 scholarship sponsored by the Dunn County Homemakers went to Susan Cropp, and Emilie Olsen received the $50 PEG scholarship. Bradley Quarderer was presented the Bausch and Lomb Science award.

Receiving art awards were Joel Evan and Lynn Thomas. This award will pay their tuition at a one-week summer art camp scheduled in Wausau. Funds for these awards were raised by Art Club members.

Menomonie has a new sister city in Konakovo, Russia.

The City Council approved entering into a sister city with the Russian community of 50,000 located north of Moscow. Menomonie already has one sister city arrangement with Minaminasu, Japan.

Officials from Konakovo expressed interest in making Menomonie its sister city when a nearby community in Russia became a sister city to La Crosse.

Mayor Charles Stokke said Russian cities are seeking sister city arrangements with U.S. communities to assist them in obtaining such things as medicines which are in short supply there now.

“The Eastern block and Russians are actively seeking sister cities because they see what democracy offers,” Stokke said.

UW-Stout Vice Chancellor George DePuy, who has already visited Konakovo, plans to lead another group on a visit this summer. Konakovo is largely a an agricultural community, but it is also home to a large ceramics factory.

SUPERIOR — Robert Thomas of Menomonie is among several UW-Superior athletes who will be inducted in the school’s Hall of Fame.

Superior is recognizing seven individuals and the members of its 1993-94 men’s hockey team chosen for induction July 24 into the Hall of Fame.

Induction into the Athletic Hall of Fame is an honor bestowed upon individuals and team members who demonstrated outstanding skill and dedication as Yellowjacket student athletes.

Robert Thomas of Menomonie was an excellent Yellowjacket athlete who went on to a long career as a distinguished coach at the high school and college levels. He is inducted into the UW Superior Athletic Hall of Fame as recipient of the Mertz Mortorelli Coaching Achievement Award. As a student athlete, Thomas played four years on the varsity basketball team, including the 1957 team that participated in the NCAA Tournament.

After graduating in 1960, Thomas went on to a career as an educator and athletic coach in Viola, before moving to Spring Valley in 1963.

At the high school level, he coached football, basketball, track, baseball and wrestling. In Spring Valley, his baseball program produced one collegiate All American and a professional player. In 1986, Thomas accepted a coaching position at University of Wisconsin-Stout.

As assistant football coach, he handled offense and special teams, developing five All American players. As head wrestling coach, his teams produced 17 wrestlers as national qualifiers, six as All Americans, and the only national champion in school history.

Thomas retired in 1997. He was inducted in 1998 into the Wisconsin Football Coaches Association Hall of Fame.

Anyone who has driven by the High School over the last few weeks may have noticed multi-colored fabric squares strung between two trees near the south end of the building.

These “flags” are a product of juniors and seniors in Mrs. Bassett-Shea’s Human Relations class.

Each flag was designed by individual students with messages ranging from symbols of peace, poems, quotes, including words and phrases in several different languages.

The inspiration for this activity came from Tibetan prayer flags.

After some time, the prayer flags will fade and fray (they purposely are not hemmed), symbolizing the natural passing of all things.

The class hopes that when passersby will look at the flags, they will send out their own wishes for peace, tolerance, understanding and equality.

The Panthers offered the multi-talented Stanley a full scholarship in May. Stanley has also received strong interest as a QB and punter from Wisconsin, Michigan State, Iowa, Minnesota, Illinois and Stanford.

Stanley (6-4, 196 pounds) received a rare invitation to the Rivals’ invite-only elite camp, and attended the camp in Chicago. Universities are allowed to make early offers to underclassmen football players, and players can make verbal commitments early, but are not allowed to sign until the first Wednesday in February their senior year.

Stanley played some varsity ball at MHS as a freshman, but thrust his way into the limelight his sophomore season when he earned all-state honorable mention as a punter, after averaging 43 yards per punt, including 11 punts inside the 20 yard line.

Are you ready for retirement?