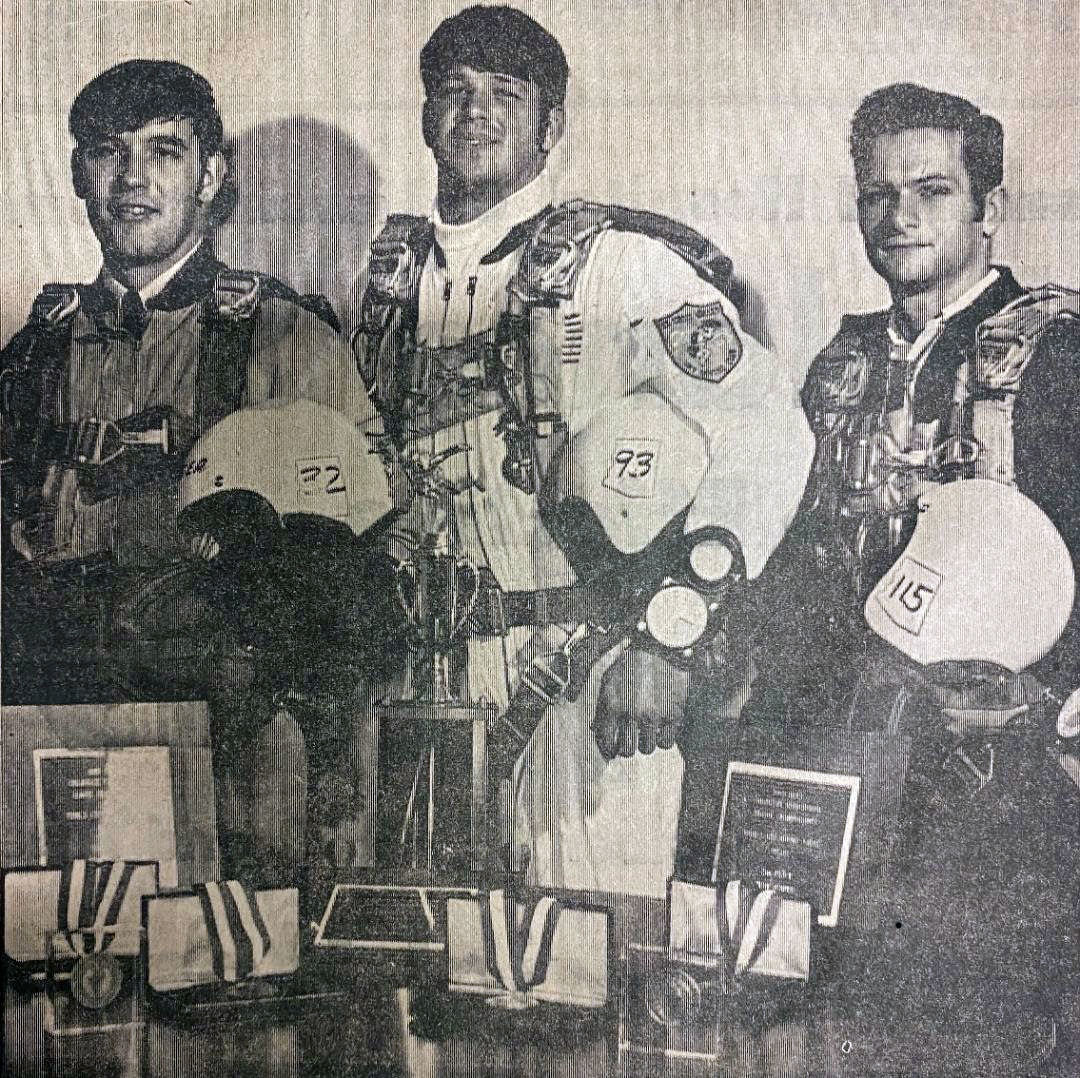 Wednesday, Jan. 7, 1970: Jump Team. Stout State’s team of Larry Krueger, left, Butch Yost, center, and Dave Gagnow finshed second recently in the 10th annual National Collegiate Parachute Championship held in Phoenix, Ariz. Yost finished as the meet’s top individual performer by winning the accuracy jumping competition over 147 other contestants. The Bluedevils were runner up in the team event which drew 80 entries to the cadet instructors of the Air Force Academy.

The advent prophesy that the end of the world would be reached January 4, didn’t seem to materialize to any alarming extent.

Last Sunday the thermometer indicated greater cold than has been known since the settlement of the county. It was reported 54° below. Fingers, noses, and faces were frozen and a general shiver experienced.

Sheriff Macauley took charge of Zachariah Turner, of Downsville, an insane man last Wednesday, and brought him before Judge Kelley. Upon examination he was judged insane and is now in jail awaiting transportation to the Asylum.

Building Statistics for 1884. The record of building improvements in Menomonie for 1884 indicates that the year has been a fairly prosperous one, and shows a good average growth for the city when compared with former years. There has been a notable decrease in new buildings for business purposes, but in other respects the improvements make a very gratifying exhibition of continued thrift and prosperity. We do not know of a single business building unoccupied, and there is scarcely a vacant dwelling within the limits of the corporation. The growth of the city is steady and substantial, the increase barely meeting the demands of business and the gain in population.

A tramp by the name of Albert Doan, hailing from St. Paul, broke into the office of the Wisconsin Central depot Tuesday. Jan. 8, and robbed the money drawer of its contents, over $60. Officers were immediately placed upon his track and he was captured near Emerald, ten miles, west and returned to this place where, upon arraignment before justice Best he plead guilty and was placed in jail. McKnee Peeples, the agent, was at dinner when the robbery occurred. About $50 of the money was recovered.

Eau Claire, Wis. An unknown man got cash for a bogus check for $30 on a 75 cent purchase at Christoferson’s west side store only a few blocks from the Daniel Shaw Lumber company, by which the check purported to have been drawn. No arrest has been made. It is undoubtedly the same swindler who got checks cased in Menomonie and Chippewa Falls recently. He dressed as a laborer and claimed to be an employ of different lumber companies. A bogus check for $28 cashed at Chippewa Falls has turned up at an Eau Claire bank. It is the same handwriting as that cashed by Christoferson.

Wheeler, Jan. 5.—The Commercial club meet in the club room of Wheeler store Monday evening. Nine new members were added to the roll. With such a rapid increase in membership the club has hopes of reaching the two hundred mark before long. We are convinced that the club has its faculties at work and that it intends to keep things moving. It startled the town Tuesday morning by announcing that they had organized a fire department. Other prospects for the town are an oil station and a dentist.

While engaged in helping with corn shredding at the George W. Emmerson place, Saturday forenoon, Joe Frasl had the misfortune to get his left hand in to the machine, crushing the member so badly that it had to be taken off above the wrist. Drs. Larsen and Cooper attended the injured man and made him as comfortable as possible, but he was removed to Chippewa Falls the same evening to enter St. Joseph’s hospital. Mr Frasl spent several weeks in the hospital last summer, suffering from blood poison, as a result of what appeared like only a slight scratch on one of his hands.

Bank of Menomonie up Million in Resources. Resources showing a gain of $1,075,000, government bond holdings doubling, loans and discounts up approximately $120,000- these were some of the bits of good news that were passed on to stockholders of the Bank of Menomonie Tuesday evening at their annual meeting, when they learned that the earnings of their bank for the year 1944 had been very satisfactory, and that the bank had widened its services to the community through its consistent, steady growth during the twelve months that ended on Dec. 31. In his remarks to the stockholders, A.R. Vogtsberger, executive vice president, referred to the great opportunities that confront Menomonie and Dunn county particularly because of the fact that the Lakeside Aluminum Co. with 240 on the payroll. Largest employers of labor in the community, makes a valuable contribution to the industrial life of this area. The government bond account of the bank had reached $1,896,157.97 on Dec. 31 1944, against $945,140.23 at the close of the previous year.

Deposits have increased over one million dollars in the last year. During 1944 the bank opened 254 new checking accounts and 428 new savings accounts.

A major addition to the Menomonie central office of the Wisconsin Telephone Company was completed during 1969 according to local manager Dick Haanen.

He said installation of more than $130,000 worth of equipment is continuing, and is expected to be completed early next year. The $200,000 addition, which almost doubled the size of the previous facility, will house equipment to keep pace with local growth. The local manager said 440 new subscriber lines are being installed, along with equipment to bolster the extended area service between Menomonie, Knapp and Elk Mound. Other projects completed during the year included the installation of cable along Third Street on the Stout campus. Smaller projects were initiated to keep pace with increased service demands of the rural areas as well. Pending action by the Wisconsin Public Service Commission, the company plans to eliminate eight-party service from the surrounding area of Menomonie, in favor of four, two or one-party service. Haanen said this is part of the company’s effort to replace all eight-party service in the state by 1972.

The construction projects brought the total value of the company’s facilities here to more than $2,261,000, compared with $2,100,000 last year. Haanen cited company growth figures of the area, including a service per cent increase in the number of phones over last year, to 6,700. He said calling volume has also increased, from 26,135 per day last year to nearly 28,000 calls a day this year.

Caution: Trees on Menomin there for reason.

Been wondering what those Christmas trees in the middle of Lake Menomin are there for?

A very good reason, according to Arden Alexander who puts the trees out on the lake every year.

“I’m sorry. We’re closed,” said Marketplace Foods employee Deb Harstad. She sounded like a broken record as customer after customer was turned away Wednesday following a power outage that closed the grocery store and a branch of Johnson Bank in the building for more than 10 hours.

Store manager Steve Fenn estimated the loss of sales and product at more than $10,000, but that was before the store re-opened Wednesday afternoon.

On Thursday, assistant store manager Tom Maher said there was no determination of actual loss. He said many grocery carts of product had to be thrown out because the items just got too warm, including produce, deli, dairy, frozen foods and fresh meats. “ Fresh meat was probably the largest portion I would guess from a dollar standpoint.” Maher said. As far as Maher knew, he said there was still no conclusion of why the power went out in the first place.

Three businesses in downtown Durand have been declared a total loss.

A fire that started at the Main Street Grill at around 11 p.m. on Sunday quickly spread next door to Cottage Hill Floral and Frame and a storage unit for Toni’s Interiors. The businesses, which all had common walls, are located near the corner of Third Avenue West and West Main Street. The fire appeared to have traveled through the roof levels. Fire departments from Menomonie, Rock Creek and Plum City were among those who braved the frigid temperatures to provide mutual aid to the Durand Fire Department. No one was injured in the effort. Although just a few feet from the fire’s origin in the cafe, the Hair Hut was protected by a fire wall. The building only suffered smoke damage on the main level, but did sustain water damage to the basement.

With a population of 2,000, the toll of the downtown fire is sure to take its toll.

All of the buildings were more than 100 years old, and the businesses have been in operation for many years.

State fire investigators were called to the scene, but the cause of the fire has not yet been determined.

As the wind blew and the snow swirled, a 51-year-old Boyceville man was struck after stopping late Saturday night to help another motorist who slid off the road.

On Jan. 3, Dunn County deputies and Menomonie rescue personnel sped to the scene on State Highway 79, south of 750th Avenue, in the Town of Sherman. They found a 2013 Chevrolet Impala parked in the northbound lane of the highway as well as a 1997 Dodge Dakota in the west ditch and a 2013 Toyota Rav 4, driven by a 47-year-old woman from Menomonie, in the southbound lane, about 200 feet south of the impala.

Responders located the pedestrian, conscious and alert, in the west ditch. According to the Dunn County Sheriff’s Office, it appeared that man who was hit was driving the Impala and stopped in the road to see if he could help the occupants of the Dakota.

Standing outside his vehicle with the door open in the southbound lane of travel, he was struck by the Rav 4. IN addition to blowing and drifting snow, the road at the time was slippery. Weather conditions are believed to be the main contributing factors in the crash which is under investigation. The Boyceville man was transported by Menomonie Ambulance to Mayo Eau Claire. His condition is unknown at this time.

The crash remains under investigation by the Dunn County Sheriff’s Office.