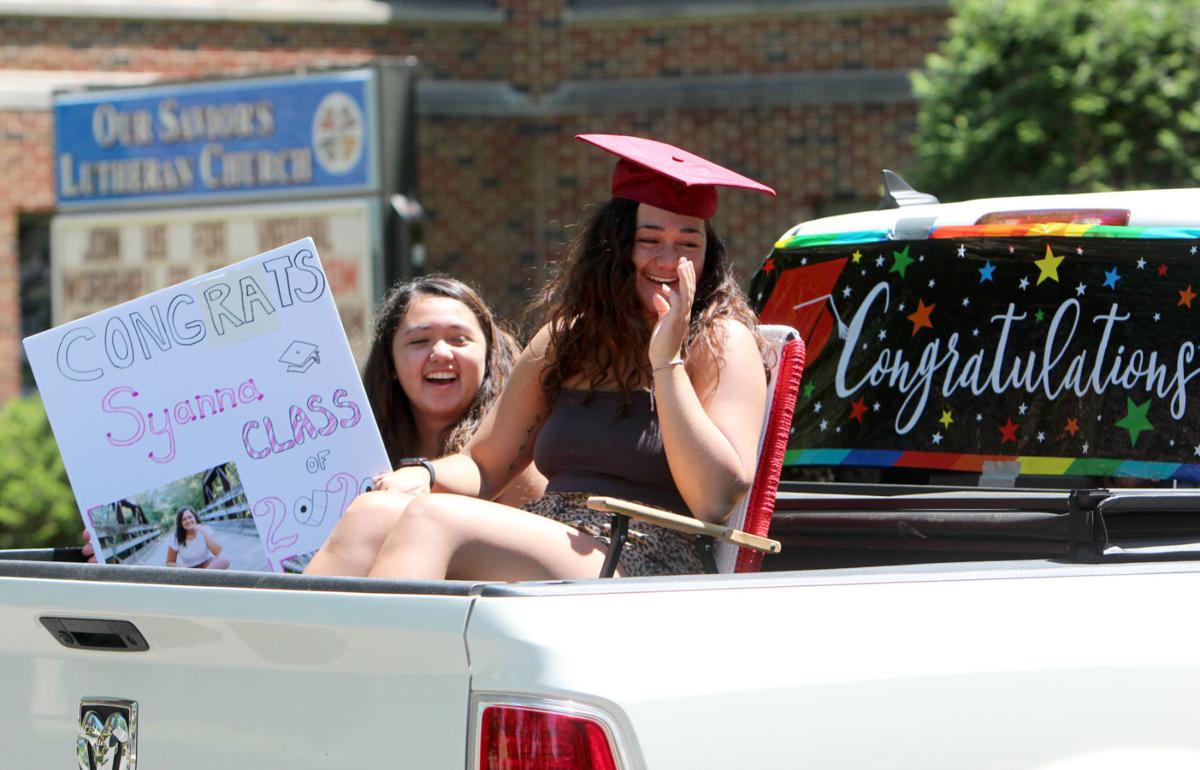 Menomonie high school seniors were honored with a parade through town on Sunday, the day that was originally set for the school's senior graduation ceremony. 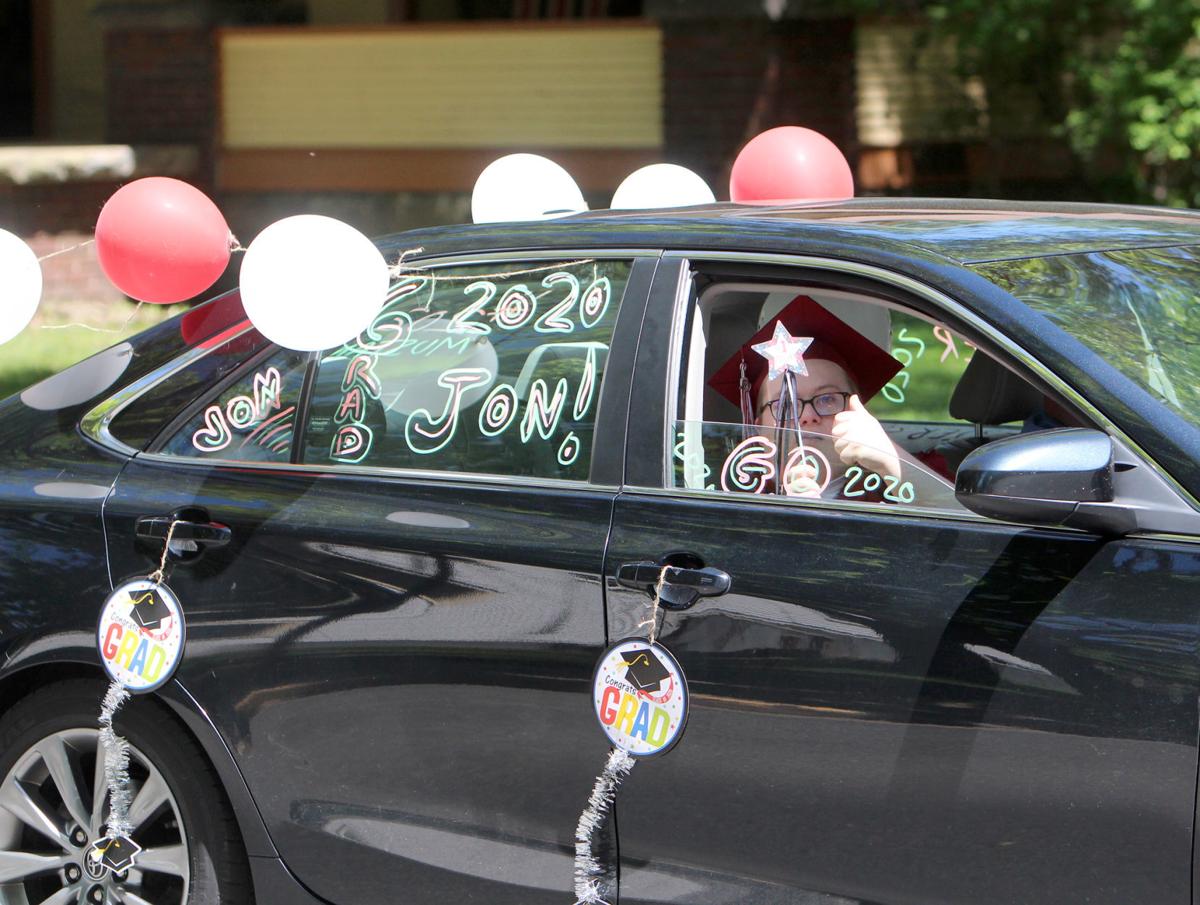 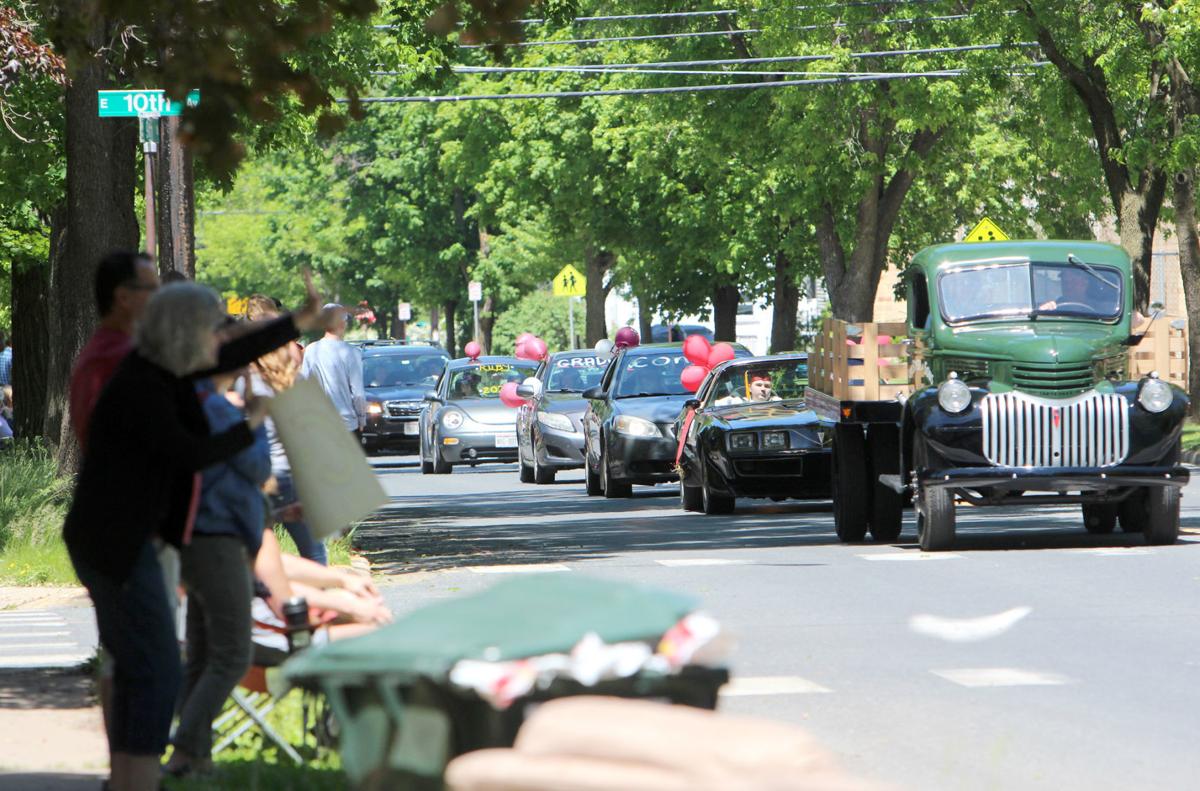 Menomonie community members show their support for graduates as they pass on Sunday.

Spring typically is filled with finality in the form of winding down academic, athletic and extracurricular pursuits. But in the wake of the ongoing COVID-19 pandemic this year, students have been been finishing their academics virtually while losing out on their final changes for the other activities.

The final finish line in high school comes with a graduation ceremony, a time for celebration and closure. Sunday was set to be the day for Menomonie High School seniors, but the ongoing pandemic short-circuited that event.

But the community found another way to honor its grads.

All seniors were encouraged to wear their caps for the parade, which started by heading east down Wilson Avenue before turning onto 9th Street East and heading toward 21st Avenue, South Broadway and then onto 5th Street West to pass in front of Menomonie High School for the conclusion.

Members of the Menomonie Police and Fire Departments were on hand to help lead the route and direct traffic.

“Just having everybody come together for the one last time before we all graduate, it’s kind of nice to see everybody and still support even with COVID going on even though you’ve got to support the social distancing,” senior Ryan Uetz said. “You’ve still got to support and have fun and see everybody in their caps and gowns.”

The plan to put together a parade came from the parents of the graduates. Aimee Cronk and Lisa Buhr said the idea was suggested from a parent in a Facebook group for parents of this year’s senior class. Cronk and Buhr began reaching out to people from the school district and Menomonie Mayor Randy Knaack about the feasibility of a parade, a swift but important process that began less than two weeks ago.

“We were on such a short timeline, wanting to keep May 31 sacred for those kids,” Cronk said. “We knew we had to get the word out fast.”

The school district is not affiliated with the planning for the event, but did help in letting people know about Sunday’s parade.

“We knew that this would be a parent-organized thing but we also knew that we wanted to get the word out,” Buhr said. “One of the fastest ways to do that is just help from the district to get an email sent out to all the seniors and their families.”

Participants in the parade or along the route were asked to practice public health social distancing measures by riding individually in their cars and all were asked to not throw candy while maintaining at least six feet of distance.

The district has a pair of additional events later in the summer for this year’s senior class. On June 12, Fox 25/48 television will be broadcasting a commencement celebration ceremony at 9:30 p.m. with the broadcast also being livestreamed on its website. This celebration will include speeches from district officials, valedictorians and class president as well as photos and future plans for graduates.

The school district will also be hosting a diploma presentation ceremony on July 17 in compliance with what the health and safety recommendations are at that time. The district said it will have a plan for a meaningful presentations with whatever restrictions are in place. That plan could include individual diploma presentations, small/medium-sized groups or other creative solutions.

Buhr said the process of setting up the parade was pretty smooth while Cronk added that Sunday’s event was a good way for closure not just for the graduates, but for their families and friends as well.

“We just really didn’t want to see May 31 come and go for them because it was to have been such a special day for them,” Buhr said.

Lottery ticket purchasers aren't the only big winners of hitting the jackpot.

The Red Cedar Speedway will not be having any races this summer.

Less than a month into rent assistance program, about 200 people have applied in western Wisconsin

The WRAP grant offers up to $3,000 to Wisconsin households who are behind on rent in the wake of COVID-19, and make 80% or less than the county median income.

From the Files: Stout obtains supercomputer in 1995

Arrests made in high-speed pursuits on I-94

Menomonie high school seniors were honored with a parade through town on Sunday, the day that was originally set for the school's senior graduation ceremony.

Menomonie community members show their support for graduates as they pass on Sunday.