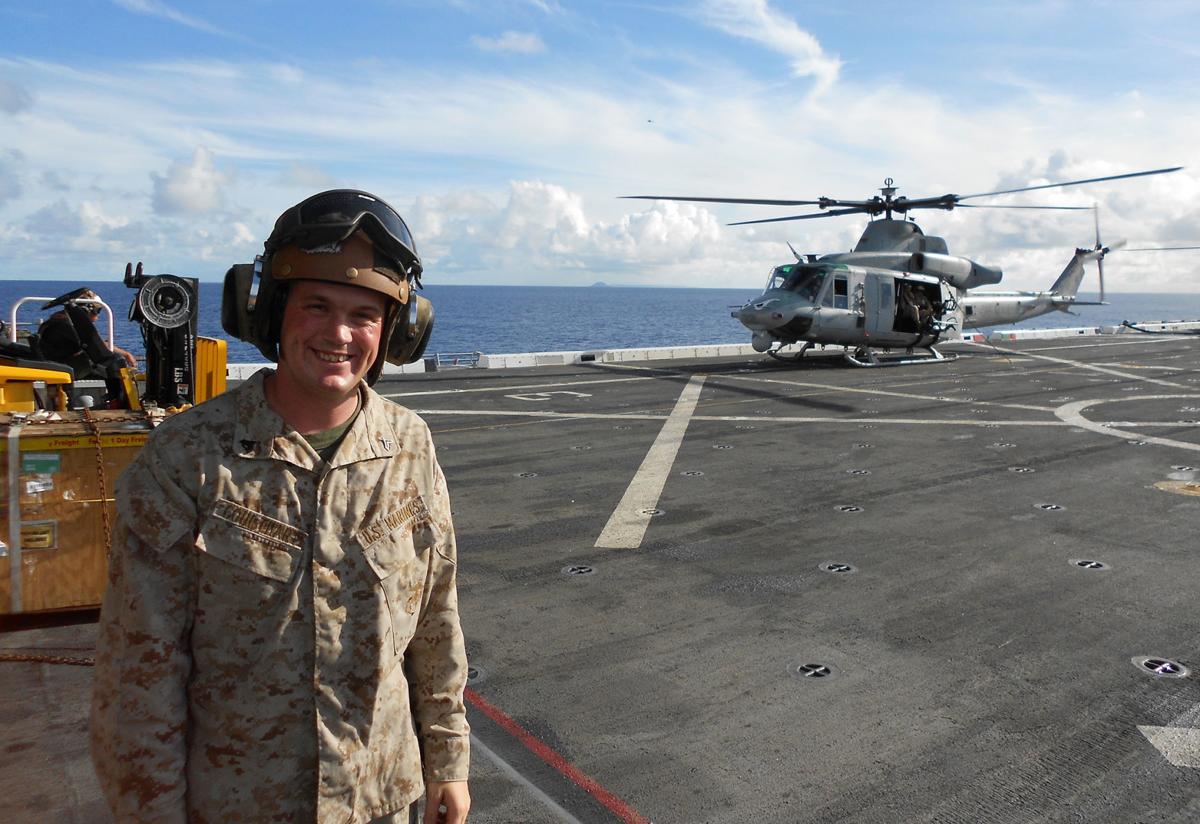 Brent Coulthart works on the deck of the USS San Diego near Iwo Jima, Japan, while deployed to the Persian Gulf in 2014. He was a helicopter mechanic in the Marine Corps before enrolling at UW-Stout in 2016. 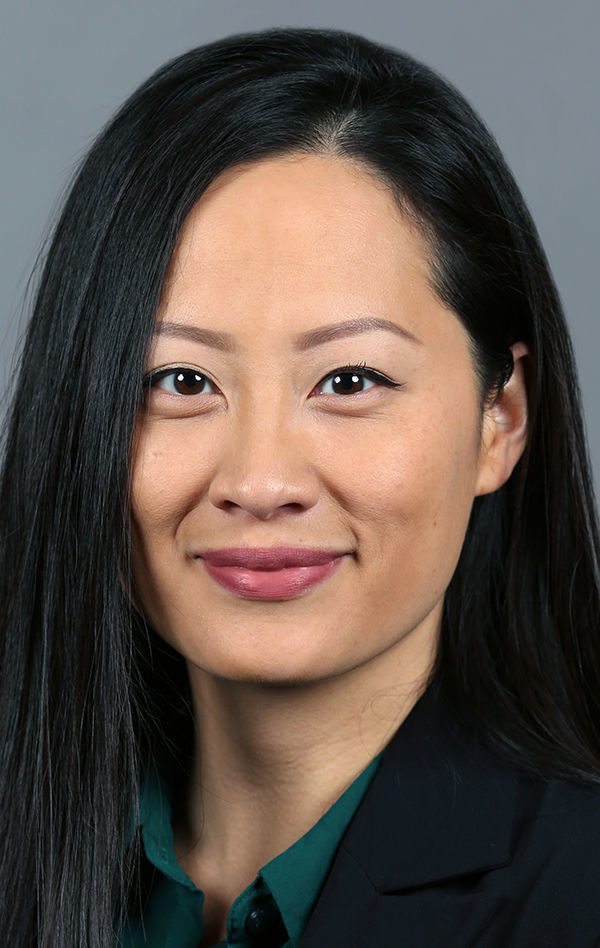 MENOMONIE — If Brent Coulthart felt like he was walking on air when he crossed the commencement stage Saturday, May 4, at University of Wisconsin-Stout, who could blame him?

A decade ago he quit college, unable to pay his loans. After five years in the U.S. Marine Corps, overcoming a drinking problem, coping with learning and physical disabilities, getting married and becoming a dad, he’s ready for a new, exciting stage in his life.

“It’s been a rollercoaster,” Coulthart said. “I’m excited and happy with what I’ve accomplished and the barriers and struggles I’ve gone through.”

Coulthart, 30, a native of Big Lake, Minn., who lives in Hammond, received a bachelor’s degree in business administration, with an emphasis in construction and engineering technology. He also has a minor in project management.

Three commencement ceremonies were held at Johnson Fieldhouse for 1,319 graduates.

His first goal after graduating will be to land a full-time job “to provide for my wife and kids,” he said, and he’s considering graduate school at some point too. He hopes to land a project management job in the aviation industry, building off his academic achievements and military career in aviation.

Goal No. 2: Establish a normal lifestyle, something he hasn’t had since he was a teenager.

That’s when, as a senior in high school, his life began to spiral down, in part because of the recession.

When his family lost their home through foreclosure, he was homeless for about five months, living with another family. A first-generation college student, he made it to Bemidji State University in Minnesota. After about two years, he couldn’t pay his loans and dropped out.

Partly out of financial need, he joined the Marines in 2011. At Camp Pendleton near San Diego, as a Huey and Cobra helicopter mechanic then supervisor, he embraced the discipline of the military.

However, he struggled at first with the culture and began to drink heavily. It came to a head one night while he was talking with his sister on the phone. She realized he needed help. “I remember that night. I was halfway through a bottle of whiskey. I broke down and turned myself in for counseling,” he said. “The military really helped me turn my life around.”

Soon after, another helicopter mechanic made a difference in his life. He and his future wife, Brandy, began dating in 2013, married and in 2014 became parents of Isabel, 4. She was born while Brent was deployed to the Persian Gulf for seven months. They have a second child, Jackson, 2, and a third one due in August.

With his life headed in the right direction, Brent left the Marines as a sergeant and collateral duty inspector in 2016 and enrolled at UW-Stout, using his military benefits to help defray the cost of college the second time around.

To be successful at UW-Stout, however, he had to deal with his dyslexia. His struggles with reading and comprehending had hurt his self-confidence and limited his potential going back to his youth. “I wasn’t a very good student in high school,” he said.

That changed at UW-Stout when he sought help from Student Support Services and from Disability Services, which receive federal funding. The former provided a writing specialist and adviser, Jamie Vue; the latter provided audio textbooks to reduce his reading load.

Vue met weekly with Brent for three years and witnessed his progress.

“Dyslexia is an invisible disability. People who have it can mix up letters, like ‘b’ and ‘p,’ mix up vowels and words can be jumbled. It can be overwhelming. Brent faced some challenges with reading that affected his writing,” Vue said.

Once Vue identified a pattern with Brent’s dyslexia, she found a strategy to help him deal with it. “He grasped that and took the initiative to apply it,” she said.

“He already had good critical-thinking skills and life skills. It didn’t take long for him to figure it out. He has a positive outlook and a good sense of humor. He turned a negative into something he could overcome,” she said.

The result: A 3.94 grade-point average while at UW-Stout and multiple Chancellor’s Awards for academic accomplishment. “Using these services made me successful. It’s been a huge help,” Brent said.

His only complaint is that his grades from Bemidji State count toward his GPA. He will miss graduating with honors by one-tenth of a percentage point.

Brent commutes about 60 miles round-trip daily from Hammond and three times a week about 90 miles when he picks up their children at a River Falls day care. Brandy is a full-time student at UW-River Falls, working toward becoming a math teacher. “We see each other about 12 to 15 hours a week,” he said.

They also both have jobs, Brent in work study at UW-Stout’s Veteran Services Office and Brandy at Walmart in Hudson as a customer service manager.

With his success and positive approach, Brent has become a role model at UW-Stout for other students and veterans, said Vue and Sarah Godsave, the benefits coordinator at the Veteran Services Office.

“He commutes and never misses a day, even in the worst weather. He’s just a motivated, smart, hard-working guy,” Godsave said. “Somehow he and Brandy manage to balance their lives for success.”

UW-Stout has about 400 students who are active military or veterans, and the university recently was named a national Best for Vets school by the publication Military Times. About 5,000 veterans are enrolled at UW System schools.

University of Wisconsin-Stout Chancellor Bob Meyer delivered his final commencement address Saturday, May 4, to more than 1,300 graduates, telling them to “never stop opening doors and pushing yourself.”

“You never know where life will take you,” Meyer said in the address, given at three ceremonies held throughout the day and evening at Johnson Fieldhouse. “Be open to the opportunities that come your way, and because you have a college degree there will be many.”

Meyer said graduates can make a difference in the world by “giving it all you’ve got,” adding, “Try to be a change agent, a contagion of optimism and positivity, and continue to learn. Be courageous. And be resilient.”

Earlier this year Meyer announced that he will retire in August.

Meyer also reflected briefly on what has transpired at UW-Stout since he became chancellor in August 2014, including an employment rate for graduates that has risen every year and sits at 98.7% for the 2017-18 class.

From the Files, Week of May 5

Big Dot of Happiness, a party supply company known for creating goosebump moments, is launching the “Heartiversary Collection” after CEO and F…

Stout commencement set for May 8

Spring commencement will be held in person and virtually for 1,075 graduates on Saturday, May 8, at University of Wisconsin-Stout.

Book Trust helps students choose, own new books each month of the year

Holly Sweeney, a Reading Specialist at Tiffany Creek Elementary School, is delighted; her students are more excited about reading this year th…

From the Files, Week of April 28

DNR: Enjoy the 'migration miracle' and help birds on their journeys

MADISON, Wis. – The Wisconsin Department of Natural Resources is encouraging bird-watching enthusiasts to enjoy the miracle of migration and t…

Brent Coulthart works on the deck of the USS San Diego near Iwo Jima, Japan, while deployed to the Persian Gulf in 2014. He was a helicopter mechanic in the Marine Corps before enrolling at UW-Stout in 2016.