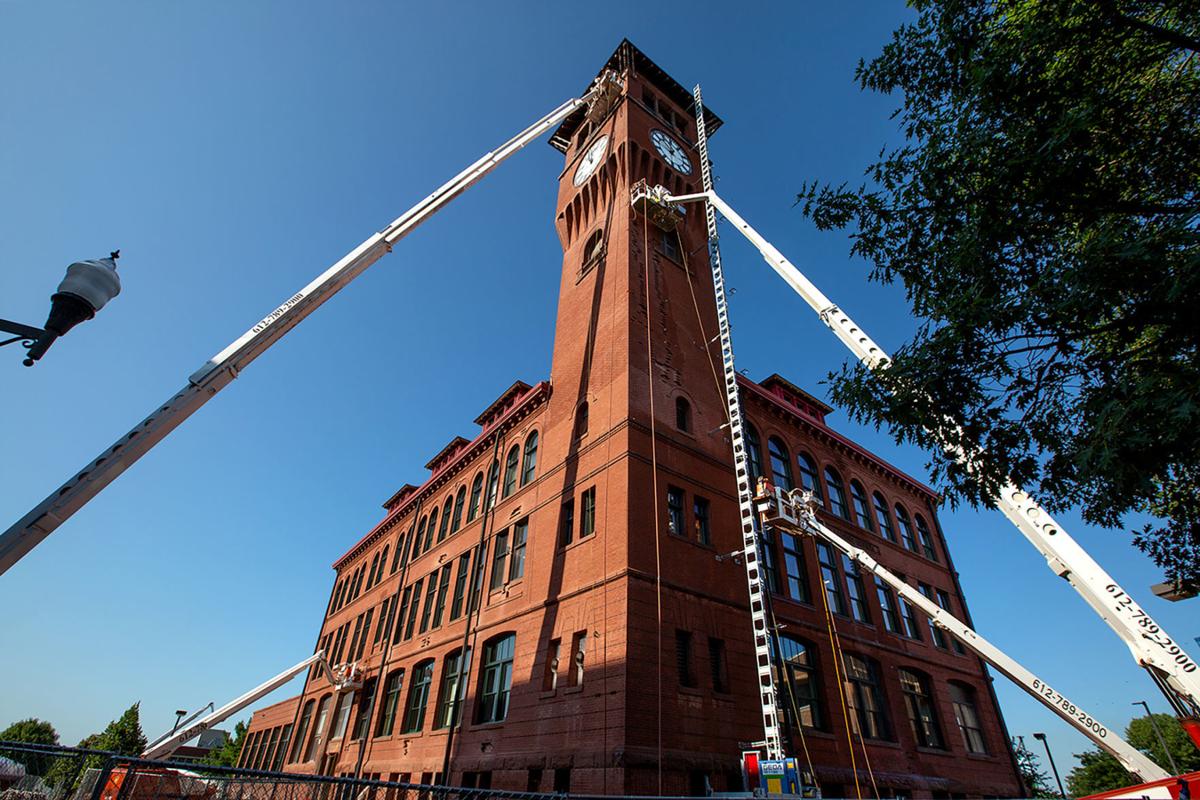 Workers in lifts replace bricks, mortar and stone more than 100 feet up on UW-Stout’s Clock Tower. The project includes putting a new copper roof on the tower. 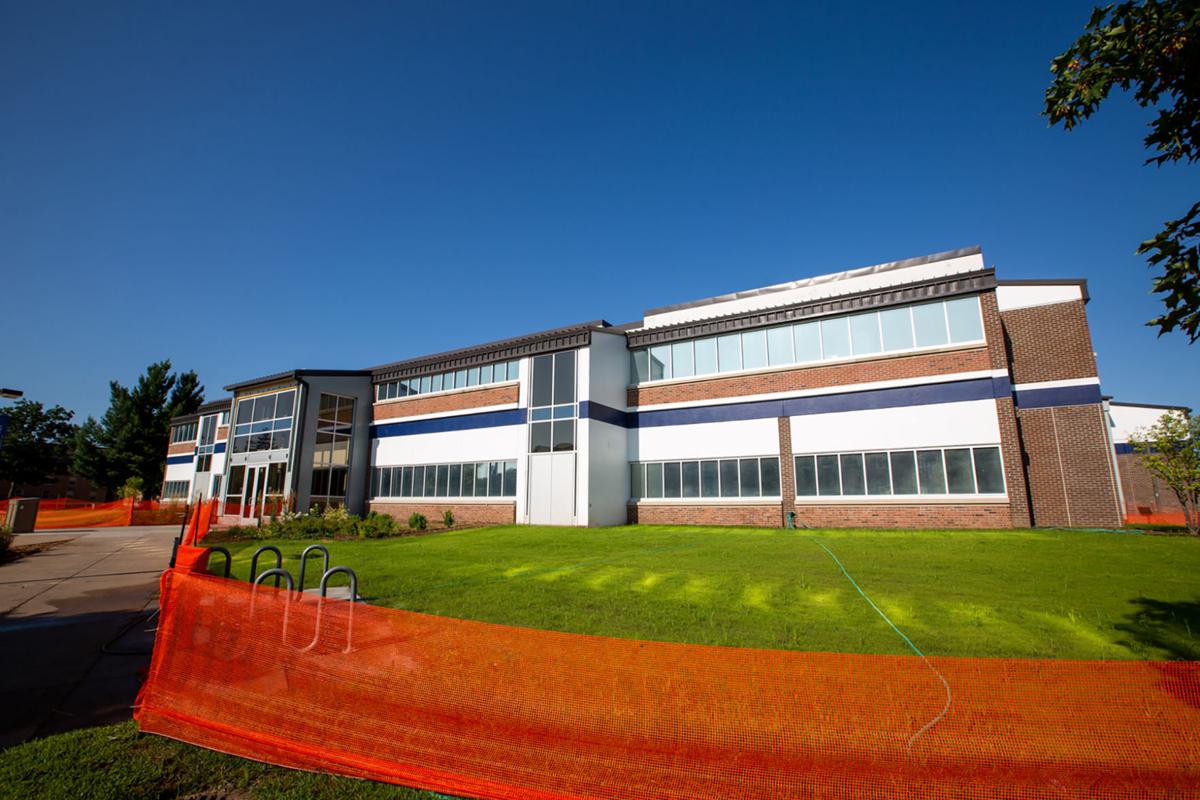 Renovation of the first floor and exterior aspects of Merle M. Price Commons at UW-Stout is nearly complete.

With less than a month to go before fall semester classes, renovations are close to wrapping up at two University of Wisconsin-Stout buildings.

North Hall and Merle M. Price Commons, adjacent buildings whose east sides open to the campus mall and west sides face Broadway Street, will reopen around the end of August.

Students are scheduled to move into residence halls, including North, on Sunday, Sept. 1. Classes begin Wednesday, Sept. 4. North Hall has undergone a complete renovation, along with three small additions and a new main entryway.

At Price, work has been limited to the first floor, exterior and entryways. The second floor, housing the main student cafeteria, previously was remodeled.

A third campus project, on the exterior of historic Bowman Hall, will continue into the fall and likely resume next spring. It involves replacing 30,000 bricks, stone accents and supports, and brick mortar and windows throughout. Also, the 135-foot Clock Tower will get a new roof and structural repairs.

The only interior work at Bowman, renovation of the south side extension that houses Registration and Records, wrapped up earlier this year. Original brick walls and beams were exposed.

The three projects, which began in spring 2018, total more than $38 million.

Workers are putting the finishing touches on the exterior of the building, including the new ground-level east entry, finishing and furnishing the interior and landscaping.

The $21.74 million project, funded with student fees, includes all new student rooms, bathrooms, common areas, entries and infrastructure. Built in 1967, the building has expanded 14,000 feet to about 90,000 square feet. It will house about 370 students.

“The bathrooms were moved to the outer edges of the building, opening it up in the middle for lounges. It’s much brighter,” said Mike Bowman, project manager for Facilities Management.

Also built in 1967, Price Commons has new windows and sills, a refurbished patio on the west side and some new bricks, along with expanded entryways on all sides.

The new first floor will feature refurbished offices for the LGBTQ center, the Qube, and an expanded and updated lounge that opens to the patio. The Qube reopened in April.

“It’s going to be a beautiful building. When you walk in the east side, you’ll be able to see all the way to the west side. Before, it was closed off. This will help brighten it up a lot,” Bowman said of the $7.57 million project, also funded with student fees.

The new patio “will be much more inviting for students,” he added.

Much of the work grinding out and replacing the mortar between bricks has been done, as has replacing the windows — to the original full openings — and stone.

The new bricks, stone and windows are historically accurate, overseen by an architect hired by the state. Bowman Hall, in the National Register of Historic Places, was built in 1897 by school founder James Huff Stout. It mostly houses student support offices as well as some classrooms.

The last major aspect of the $8.95 million renovation will be structural steel and other repairs to the tower and replacing the copper roof. The quill weathervane on the roof will be restored. Depending on the fall weather, the work may wrap up next spring.

The bells in the Clock Tower, which ring every quarter hour, were silenced in late May as work began on the tower area. They have rung for special occasions. Regular bell chimes could resume in October.

In a small separate project, the timing mechanism for the four clock faces in the tower isn’t working properly and will be repaired.

Municipalities in Dunn County will receive almost $1.5 million total in local government aid from the state.

Workers in lifts replace bricks, mortar and stone more than 100 feet up on UW-Stout’s Clock Tower. The project includes putting a new copper roof on the tower.

Renovation of the first floor and exterior aspects of Merle M. Price Commons at UW-Stout is nearly complete.