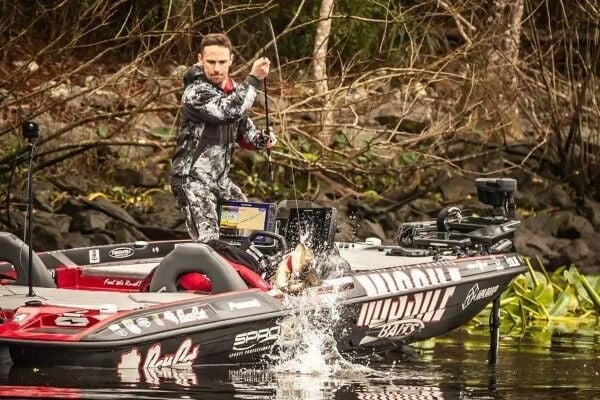 John Crews Jr., of Salem, Va., is off to a hot start on the Bassmaster Elite Series, as he won the AFTCO Elite Series event at the St. John’s River in Florida on Feb. 13. Crews is one of 100 top professional bass anglers expected to compete in La Crosse during an Elite Series event scheduled for Aug. 26-29. 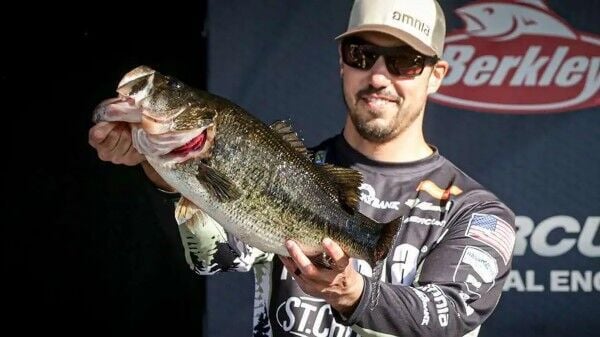 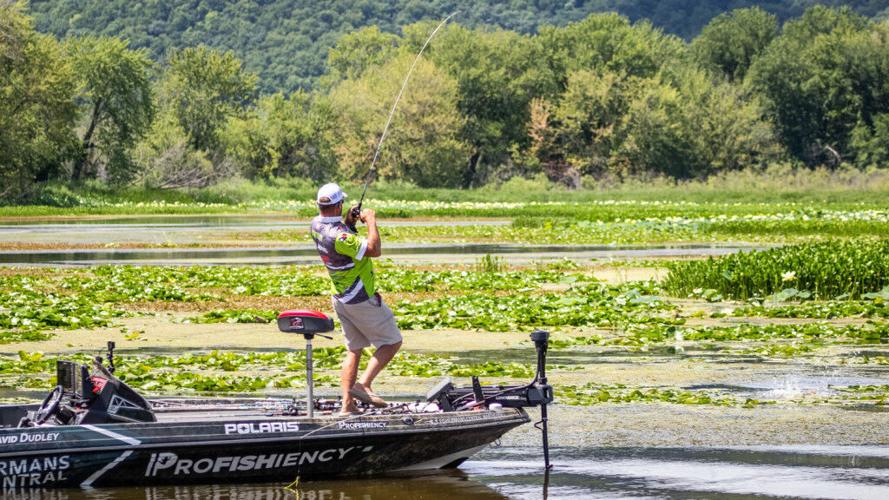 The La Crosse area of the mighty Mississippi River will host a dozen fishing tournaments this summer, ranging from the Bassmaster Elite Series to Major League Fishing’s Phoenix Bass Fishing League to the All-American Kayak Series.

By JEFF BROWN For the Tribune

For the past decade, or more, something’s been particularly fishy in La Crosse area. And that’s a good thing if you are an angler, or happen to be one of those folks whose job it is to pump the green stuff into the local economy.

Both groups seem pretty happy these days, and why not?

There are a dozen fishing tournaments scheduled for La Crosse this summer, including another dandy in the form of the Bassmaster Elite Series event Aug. 26-29. That tournament, which we’ll touch on more in a moment, is an event that brings the top professional bass anglers into town for at least four days, combines theatre with its weigh-in “show,” and injects an estimated $1.1 million into the local economy, according to Bassmaster.

Who’d ever thought that green fish could turn into so much green dough?

“We try to host one major event a year, or every other year, to stay top of mind across the country. The Elite Series is a great series to get a ton of coverage, with FOX Sports Network coverage on Saturday and Sunday, all live from the boats, and what they do on the website,” said Jeremiah Burish, director of Sports Sales at the La Crosse Area Convention and Visitors Bureau.

“It is a tremendous way to showcase the area and what we have to offer here. The amount of media coverage is just astounding. They are getting millions of hits on their website the week of the tournament.

The coverage that it brings to the area is incredible for us.”

Overall, fishing tournaments bring in anglers, of course, as well as their families and friends, support personnel, marshals or “judges” and spectators like you and me.

Ever been to a weigh-in at the Clinton Street Bridge launch area? You should, as it combines drama, theatre, suspense and a high-octane announcer that brings it all to life. This, folks, is big business — for them, and for us.

“On average, in 2019, their Elite Series tournament averaged 10,000 per event in audience only. We are looking at 1,500 to 3,500 people per day, which is which is still very solid. That is huge in terms of revenue,” Burish said. “Their staff and anglers alone will come in for seven nights, minimum. That’s 100 anglers and 60-some staff, with another 100 marshals.”

Months, even years, of planning goes into landing some of these tournaments, and Burish, a top tournament angler himself in several kayak series, knows what it takes to bring these events in. While La Crosse has an incredible fishery to offer in the form of the Mississippi River, it also has amenities, such as structural things like launches that provide great river access.

“Once people are here, they, No. 1, find out the fishery is incredible. Everyone catches a lot of fish when they are here, and that is a big perk. You want attendees and participants to catch fish. If they are not catching fish, they won’t want to return,” Burish said.

“The amenities, the infrastructure we have. There are so many boat ramps, so we have easy access to the water at so many locations. And we have great venues to host an event; we have ample lodging and campgrounds. We have all these things to be able to accommodate everyone, unlike most places around the country.

“The only thing we are really lacking is those giant fish like they have down South. Florida and Texas are ideal states (for big bass).”

So we don’t have lakes like Lake Okeechobee (Florida) or Lake Fork (Texas) that produce the “hawgs,” but we have lots and lots of bass of good size that always seem to be hungry.

While the Bassmaster Elite Series is the biggest fishing event in our area this summer, it’s certainly not the only show in town. Major League Fishing, another big-time circuit with multiple levels, scheduled four of its Phoenix Bass Fishing League tournaments for the La Crosse area, and one in Prairie du Chien, this spring/summer.

In addition, we also have the back-to-back days of college, then high school regional tournaments. Major League Fishing’s Abu Garcia College Fishing is set to make a stop on July 29 for a regional event, with the High School Fishing, Presented by Favorite Fishing, scheduled for the next day, July 30.

“There are a fair number of those throughout the country. You’ve got so many chances to qualify for regional and national competition,” Burish said of the college and high school events. “That event alone is 60-75 teams each day.”

These regional stops are nothing compared to what La Crosse will host in 2023, however, when the High School National Championships make their return. La Crosse last hosted a high school national championship in 2020, when it was moved to Stoddard because of the pandemic.

“The biggest high school event is the high school national championship, which we hosted in 2020 but had to move that to Stoddard due to pandemic,” Burish said. “That event brings in over 400 teams. We had 315 (teams) in 2020, which was the height of a pandemic.

“Not many places in the country can host an event like that. You have 1,200 people alone in participation numbers. That doesn’t include families who come to watch the national championship. There will be 1,500 attendees. That is a big event, the biggest in terms of attendees.”

Teams mean bodies, and the more bodies the more influx of green stuff to our area. It’s not all about money and exposure, however, as each tournament must apply for a tournament permit through the Wisconsin DNR, which makes sure they are doing things right and within the realm of state fish and game laws.

Fish, especially nowadays, receive top-notch treatment as the folks that run these tournaments understand conservation and the value of the resource – now, and in the future.

When done within the laws of conversation, these tournaments are a welcome boost to an economy that could use one after several years of the COVID-19 pandemic.

It’s worth checking out.

ANY IDEAS? I’m always open for ideas, as the outdoor community is full of interesting people who do fascinating things. I just need help finding them. It can be someone who is into canoeing, trapping, turkey hunting, fishing, skiing or runs ultramarathons. If you know of someone, send me a note at outdoorstrib@gmail.com

From Tribune files: Wildlife in the La Crosse River marsh

The La Crosse River marsh is home to an abundance of wildlife. Here's a sampling of some photos taken over the years by La Crosse Tribune phot…

John Crews Jr., of Salem, Va., is off to a hot start on the Bassmaster Elite Series, as he won the AFTCO Elite Series event at the St. John’s River in Florida on Feb. 13. Crews is one of 100 top professional bass anglers expected to compete in La Crosse during an Elite Series event scheduled for Aug. 26-29.

The La Crosse area of the mighty Mississippi River will host a dozen fishing tournaments this summer, ranging from the Bassmaster Elite Series to Major League Fishing’s Phoenix Bass Fishing League to the All-American Kayak Series. 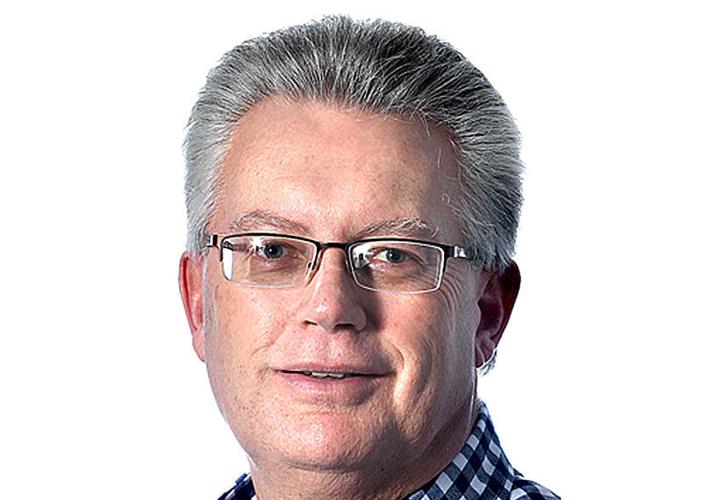 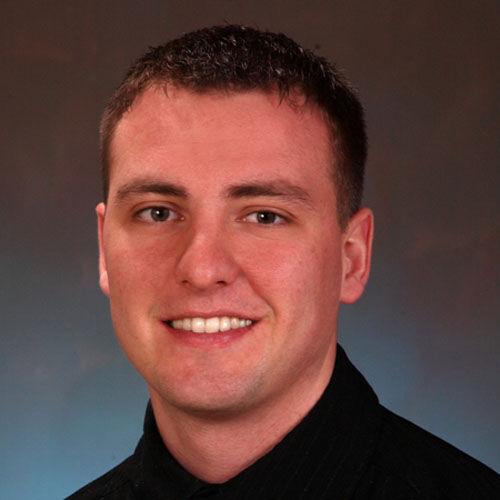