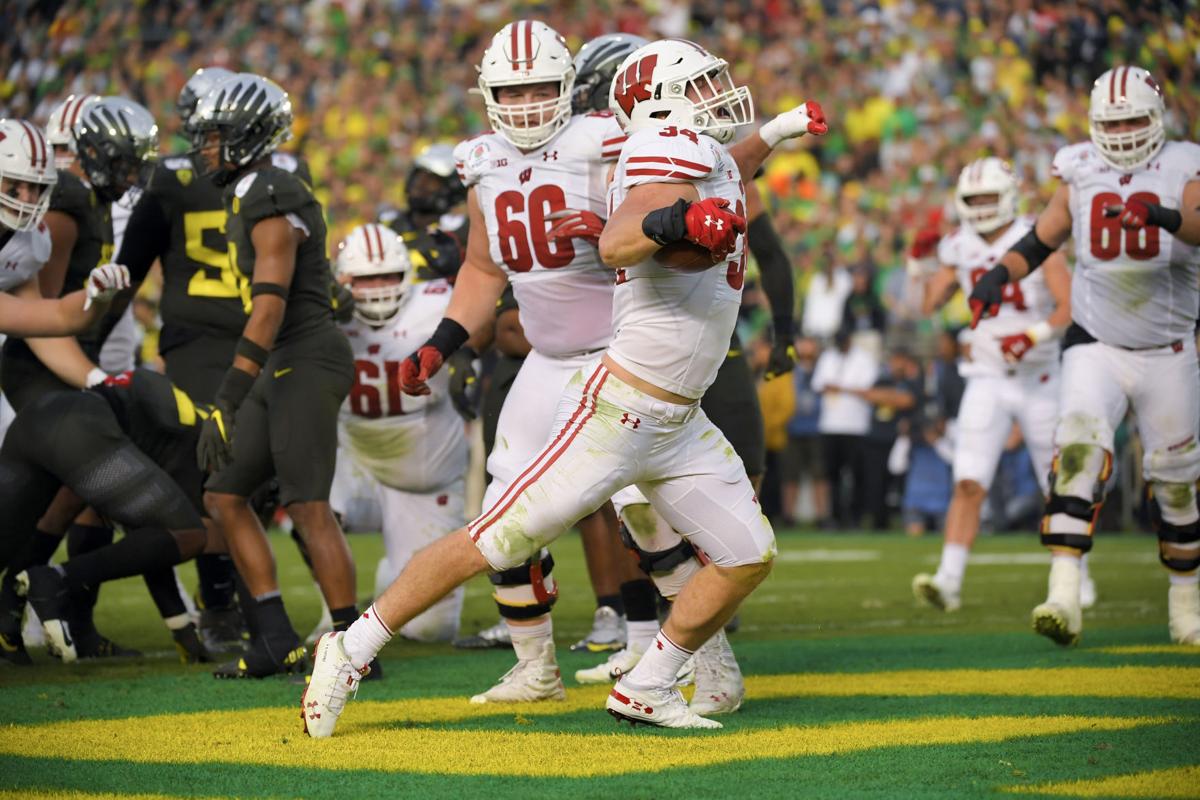 Wisconsin fullback Mason Stokke celebrates after scoring against Oregon during second half of the Rose Bowl on Jan. 1, 2020, in Pasadena, Calif. 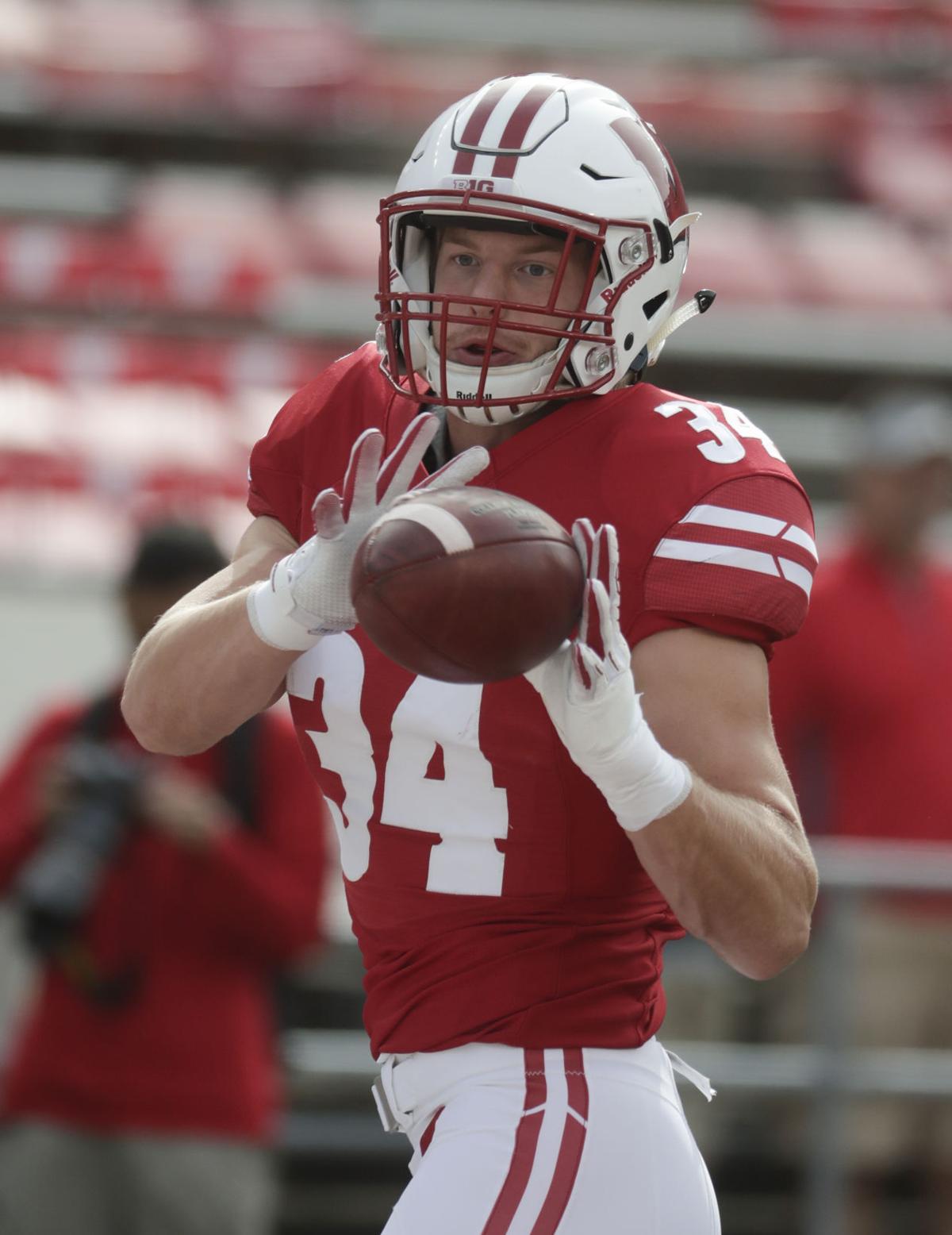 Wisconsin's Mason Stokke warms up before a game against New Mexico on Sept. 8, 2018, in Madison. 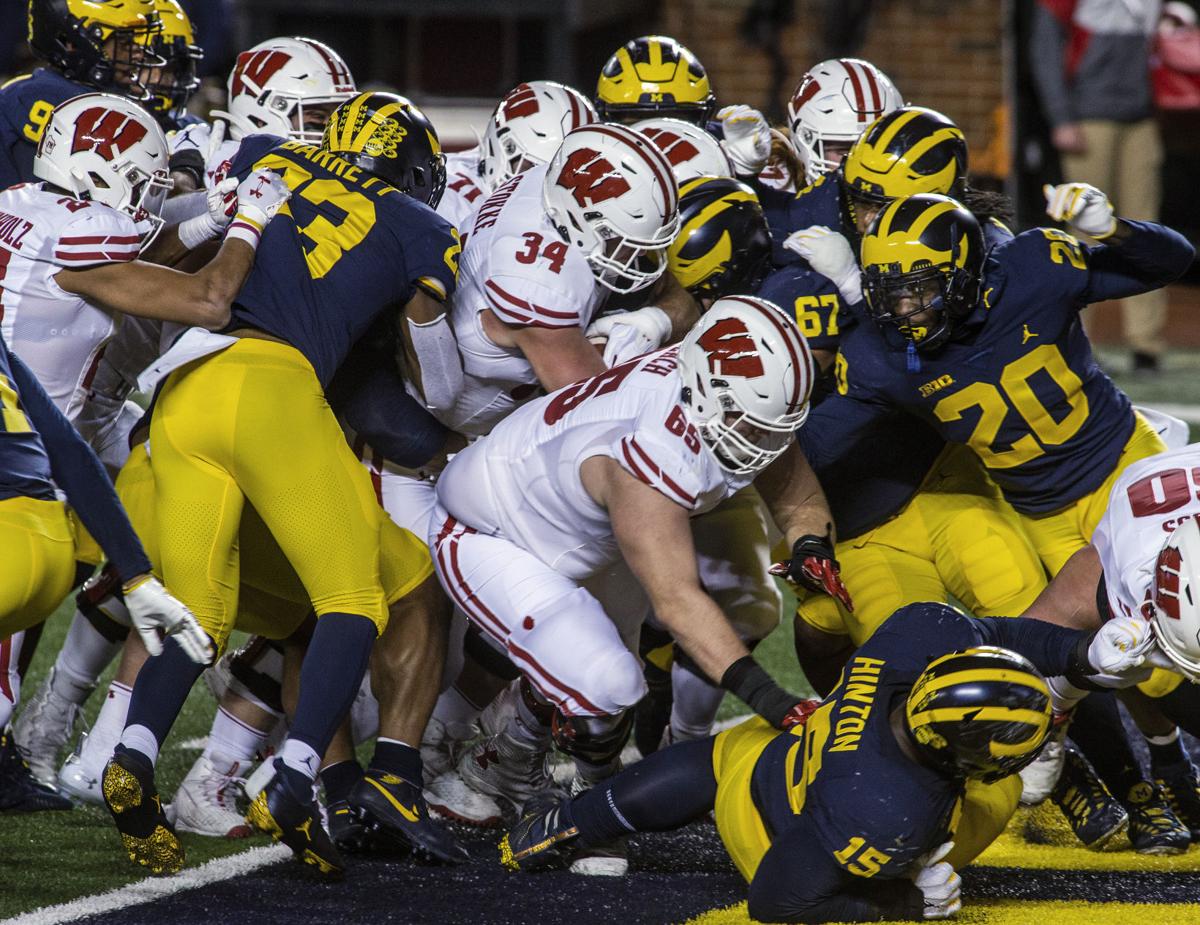 Wisconsin fullback Mason Stokke (34) scores a touchdown against Michigan during the second quarter of a game in Ann Arbor, Mich. on Nov. 14, 2020.

Mason Stokke is proud to be the next man up.

The Menomonie native recently completed his final season with the University of Wisconsin football program, a team with a lengthy track record of producing high level fullbacks.

Stokke certainly fits the bill in joining that group as he prepares for next week’s NFL Draft where he could be selected in the seven rounds or signed following the draft. With 28 collegiate games under his belt, Stokke fits the mold of what pro teams are looking for at the position and — wherever he ends up — is ready to put the work in to be the Badger program’s next success story at the next level.

“I take a lot of pride in it,” Stokke said. “Growing up a Wisconsin kid and coming out of Wisconsin, definitely I want to represent Wisconsin well. There’s a great tradition in the fullbacks coming out and having great success, so I want to continue that and be the next guy up.”

Joe LaBuda’s first interactions with Stokke came well before the future Wisconsin Football Coaches Association Defensive Player of the Year was tearing up the gridiron for LaBuda’s Menomonie program.

The 2020 WFCA Hall of Fame honoree LaBuda first met Stokke while coaching him in little league baseball, where the youngster’s competitiveness and athletic ability quickly stood out. Stokke also was a manager for the football team as his father Randy was an assistant coach on LaBuda’s staff.

“He has such a competitive nature and it was obvious at a young age he was a pretty gifted athlete but also a tremendous worker – whether it be wrestling, football, whatever – he’s got a work ethic that is second to none,” LaBuda said of Stokke.

Once Stokke reached high school, he became a hard-to-handle force on the gridiron and the wrestling mat. Stokke won a Division 1 individual wrestling state championship at 195 pounds as a junior after placing third at 152 pounds as a sophomore. He earned three All-Big Rivers Conference first team honors on the football field and was named the league’s offensive and defensive MVP and was a three-year team captain.

Stokke’s football dominance built to a crescendo during a senior season when Stokke was a top two-way player in the state, rushing for 1,740 yards and 29 touchdowns as a running back while logging 184 tackles — including 22 for loss, three forced fumbles, three interceptions and two sacks as a linebacker. He was a first team all-state honoree at both positions, was named the WFCA Defensive Player of the Year and also won the John Anderson Award as the state’s top senior linebacker.

His high school football career came to an early end when Stokke suffered an Achilles injury early in Menomonie’s Division 2 state quarterfinal contest against Chippewa Falls, a game the Mustangs were winning 6-0 when Stokke was injured before ultimately losing 17-6.

Stokke recovered to put forth another dominant season on the mat, closing his career on a 75-match winning streak as he rolled to his second state championship when he took home the title at 220 pounds.

Wisconsin Badgers fullbacks Mason Stokke and John Chenal have been a key part of the UW offense thus far this season with the Menomonie native Stokke accounting for three touchdowns in the team's first two games.

Stokke was recruited out of high school as a linebacker and joined the Wisconsin program with playing that position in mind.

After redshirting in 2016, Stokke missed the 2017 season due to injury. But before the 2018 season, Stokke was moved to fullback and the Menomonie grad found greater success and health from there on out in his college career.

“A lot of kids may have given up on it and he just wouldn’t give up on it. He had some bad luck early. He had an Achilles issue, he had a knee issue,” LaBuda said of Stokke. “There’s a lot of people who just might’ve said this isn’t going to happen and he refused to believe that. It’s tough to fight through those kind of injuries and do all the rehab. You’re by yourself, you’re not with the team and it just speaks loudly to his character that he fought through that. He just wouldn’t give up on his dream.”

Stokke made his debut with the team in a season-opening victory over Western Kentucky and logged his first career carry a week later against New Mexico and played in nine games that season at fullback and on special teams. In his junior season Stokke played in 12 games, scoring his first career touchdown against Purdue while adding a scoring plunge against Oregon in the Rose Bowl.

He pointed to Wisconsin’s 38-17 victory over Minnesota in the 2019 regular season finale as the most memorable game of his college career. Stokke ran for 14 yards on two carries while adding three catches for 30 yards against the rival Gophers in a win that clinched the Badgers the Big Ten West Division championship in a snowstorm in Minneapolis.

Stokke played in all seven games of Wisconsin’s pandemic-shortened 2020 season, rushing for 45 yards and a touchdown while diversifying his game with three touchdown receptions. Wisconsin was one of many programs that had to work through COVID-19 cancellations to their schedule, but Stokke said working through the adversity only made him stronger.

“Overall it was a good experience working through adversity, working through the unknown,” Stokke said. “It just prepares you for anything in the future that just comes your way.”

Following Wisconsin’s 42-28 victory over Wake Forest in the Duke’s Mayo Bowl, Stokke announced he would be moving on to the pros. He took part in the College Gridiron Showcase in Texas — a three-day postseason event where he met with teams and went through an on-field workout — at the start of the year.

More recently Stokke has worked out with several NFL fullbacks including Minnesota Vikings Pro Bowler CJ Ham, former Green Bay Packers Pro Bowler John Kuhn and former Wisconsin Badger and current Las Vegas Raider Alec Ingold. Stokke picked their brains about how to prepare for the next level and what he can expect.

From now until the draft Stokke will continue working out and staying ready for whatever happens on draft weekend. He wants teams to know he’s a hard worker that is tough, willing to do what it takes to win and leads by example as he is ready to contribute on special teams as well as a versatile fullback in all phases of the game. Derek Watt and Ingold are recent Wisconsin graduates who had a similar skill set and ultimately made it to the pros.

The pro scouts that have reached out to LaBuda have heard the same, that Stokke is a mentally tough smart player that will work as hard as he can to make it.

“To me I think he’ll be a really valuable asset to an NFL team because he does so much,” LaBuda said of Stokke. “He can run the ball inside if you need him to on the short yardage stuff but he’s got very good hands out of the backfield and the Badgers used him out of the backfield quite a bit and he’s just an incredible blocker.”

He even caught up with an old teammate in recent weeks as he caught passes from Nate Stanley, a fellow Menomonie graduate and former quarterback at the University of Iowa who was drafted in the seventh round of last year’s NFL Draft by the Vikings. Stanley spent the 2020 season on Minnesota’s practice squad.

Having two future professional football players a year apart from the same city is a rare feat, one LaBuda says is reflective of the hard work the two have put in, as well as their makeup as ‘great people and great young men of faith’.

“They’re prime examples of role models for the young men of our community and that’s really important,” LaBuda said.

Photos: Mason Stokke Through The Years

When: Thursday, April 29 through Saturday, May 1

Menomonie native and University of Wisconsin fullback Mason Stokke is signing with the Carolina Panthers as an undrafted free agent.

Wisconsin fullback Mason Stokke celebrates after scoring against Oregon during second half of the Rose Bowl on Jan. 1, 2020, in Pasadena, Calif.

Wisconsin's Mason Stokke warms up before a game against New Mexico on Sept. 8, 2018, in Madison.

Wisconsin fullback Mason Stokke (34) scores a touchdown against Michigan during the second quarter of a game in Ann Arbor, Mich. on Nov. 14, 2020.