How did a Menomonie baseball team that finished with a .500 record in the regular season go on a postseason run to state that included a 12-inning win over the defending state champion in a contest that stretched over two days?

“After you got done you sat back and (thought) how did that happen?” Lund said recently.

Menomonie came into the spring of 1969 with 40 players overall including seven returning letterwinners vying for time in the lineup. Joel Evan, Randy Hartle, Gary Lund, Tom Speidel, Mike Styer, Bill Ruehl and Gary Buckley were the returning letterwinners to give the team a solid core as it was coming off a 1968 season in which the team had a 9-6 record and fell in 10 innings to Bloomer 2-1 in the district playoffs.

Led by coach Pete Hendrikson, the Indians were a team built on the fundamentals.

“Coach Hendrikson was a very good coach,” Lund said. “We played small ball and he stressed the fundamentals. If you weren’t a good hitter, you knew how to bunt. That’s for sure.”

Postseason victories over Glenwood City (14-3), St. Croix Central (6-0) and Colfax (9-4) pushed the Indians into double digits in victories for the season, but more important moved the program to the sectional round in Alma where they would face the hosts in one of the semifinals with the defending champs ultimately meeting the winner. A combined seven runs in innings four through six helped Menomonie grab a lead in the middle innings it wouldn’t relinquish. Ruehl’s RBI single in the top of the third inning plated Joel Merritt to tie the game at one before Merritt’s three-run homer in the fourth put the team in front. Speidel scored on a base hit from Styer to lengthen the lead to 5-1 and Menomonie scored three more times in the sixth with Speidel’s double representing the lone hit of that inning. Alma cut into the gap with one run in the sixth and seventh but Menomonie shut the door to move one win away from the program’s second trip to state.

Standing in the way was an Eau Claire Memorial squad loaded with talent including future Major League Baseball veteran Tom Poquette, who was drafted by the Kansas City Royals in 1970 and played more than 450 games across a 7-year big league career with the Royals, Texas Rangers and Boston Red Sox.

Menomonie and Eau Claire Memorial played to a 2-2 stalemate through 11 innings on a Friday afternoon in Alma amid a drizzling rain before the game was called by mutual agreement to allow the Menomonie seniors to return home for graduation. Both teams scored single runs in the third and fifth innings on the first day. Hartle scored on an error to put Menomonie in front 1-0 before Memorial came back with an unearned run in the bottom of the inning to even the score. Speidel drove in Jeff Abbott on a single in the fifth to help Menomonie regain the lead at 2-1 before another unearned run from the Old Abes pulled them even.

The teams both had chances to take the lead over the next several innings but remained deadlocked. Once the game was agreed to be moved to Saturday, the next decision was where the game would be played. A coin toss between Hendrikson and Eau Claire Memorial coach Dennis Bohman was held to decide the venue and Menomonie won, meaning the winner-take-all finale would be played at Wakanda Park.

Once play resumed on Saturday the Indians wasted no time putting a crooked number on the scoreboard, scoring twice in the top of the 12th to take a 4-2 lead. Ruehl singled to start the 12th and moved to second on Hartle’s sacrifice bunt with Hartle reaching base on an error. Ruehl and Hartle moved up a base on Speidel’s long fly ball out to center field. Ruehl dashed home on a wild pitch and Styer plated Hartle with a single to give Menomonie a two-run lead.

Ruehl got leadoff batter Jim Ayres to ground to for the first out before striking out Dick Vorphal to move Menomonie one out away from state. Bob Burling crushed a long fly ball to right center field but Buckley corralled it for the final out.

Lund worked seven innings in the sectional championship game, returning to the game after pitching against Alma a day earlier. He struck out five and walked 11 while Ruehl picked up the win with one inning of scoreless relief. Styer started the game and allowed just one hit in his first four innings. Lund credited the defense behind the pitching, saying he had confidence each ball put in play could be an out.

“Gary Buckley in center, Randy Hartle in left, those guys could flat-out fly,” Lund said. “If it was up in the air they got to it.”

The team celebrated but in the minutes after the game, the enormity of what happened still had not set in — something that is still the case for Lund five decades after the fact.

“We celebrated. We were clapping and everything but everyone was like ‘what just happened’?” Lund said.

“In my mind, this was the greatest game in Menomonie history,” said Abbott, who went on to coach at both Menomonie and Eau Claire Memorial. “We sat on the bus waiting for the rain to stop, then played 11 innings on a sub-par field in a steady drizzle. Every inning had drama, bases loaded and get out of a jam, a line drive right at someone and plays at the plate. Honestly it felt like we were destined to win because the breaks went our way, including the coin flip to resume play at Wakanda Park instead of Carson Park. That night, the seniors graduated in their uniforms, there was a big announcement at graduation and it seemed like the whole town showed up the next day.”

Menomonie advanced to the eight-team state tournament, hosted at Carson Park in Eau Claire. Menomonie opened the state tournament by blanking Superior in the quarterfinals 2-0. Lund struck out seven across seven scoreless innings for the shutout on the mound. Ruehl scored from third on a throwing error to open the scoring before Speidel scored the second run on an RBI groundout by Buckley.

Menomonie’s Cinderella run came to an end in the semifinals with a 6-3 defeat against Sauk Prairie. Three runs in the sixth inning put the Eagles out front for good. Menomonie scored twice in the bottom of the fourth to tie the game at two. Ruehl scored on Styer’s sacrifice fly and Hartle came home on an error.

Speidel led the team with a .342 batting average on the season with 25 hits including a pair of triples and one home run. Ruehl scored 20 runs and hit .293 while Ruehl, Buckley, Hartle and Merritt each hit a pair of homers. Lund ended the season with a 6-3 record on the mound in 66.2 innings pitched and a 0.94 earned run average. Styer and Ruehl ended with 3-1 records and ERAs of 2.59 and 3.21, respectively.

Overall the Indians were 14-8, but won seven in a row to reach the second of the program’s four state tournaments to date. The win over Superior represents the team’s lone win at state thus far and the run shines as a bright example of how when the postseason arrives, anything is possible.

“It was probably a ‘Miracle on Ice’ type moment for us,” Lund said. 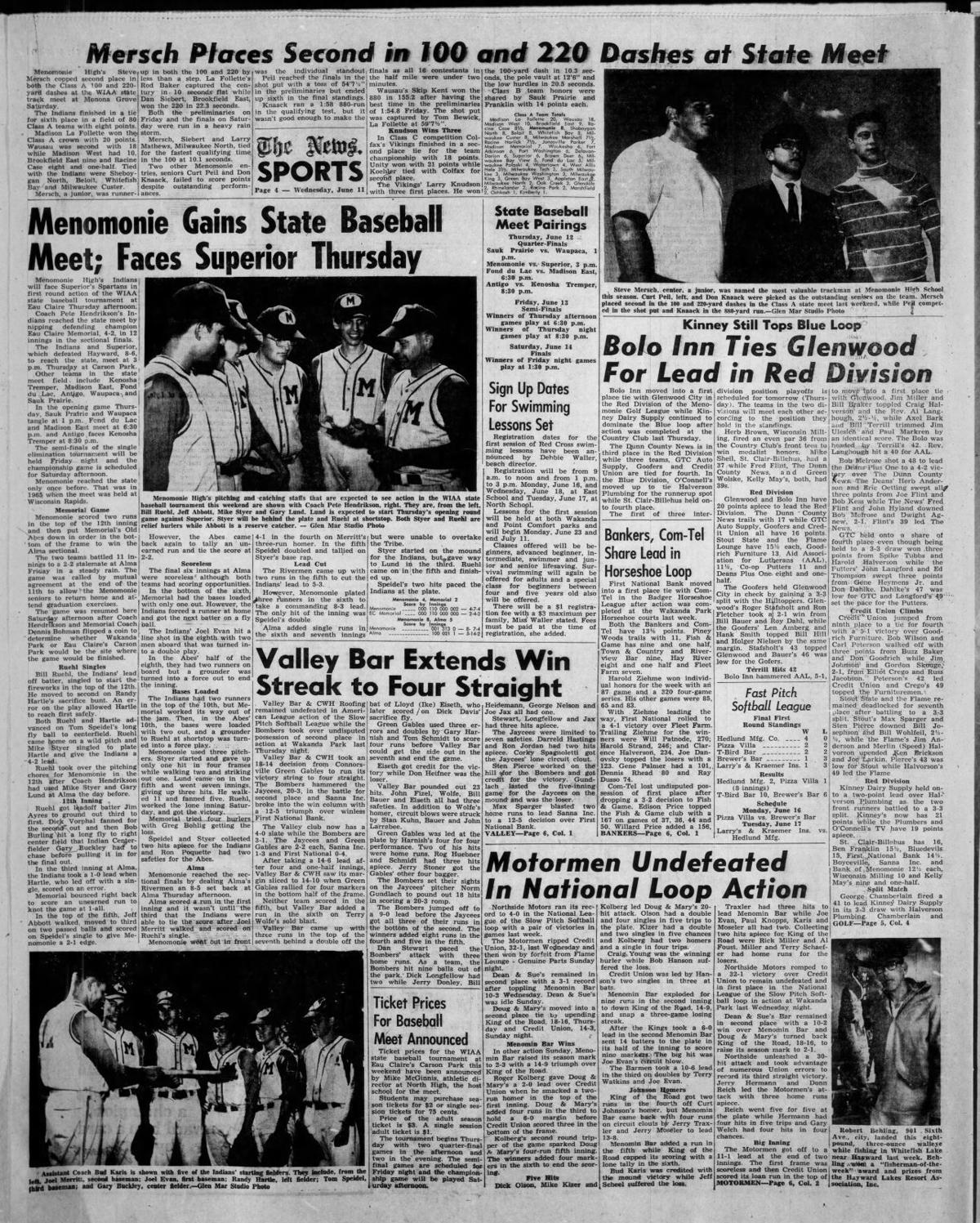 A page from the June 11, 1969 edition of The Dunn County News highlights the Menomonie baseball team's improbable run to the state tournament with its victory over Eau Claire Memorial. 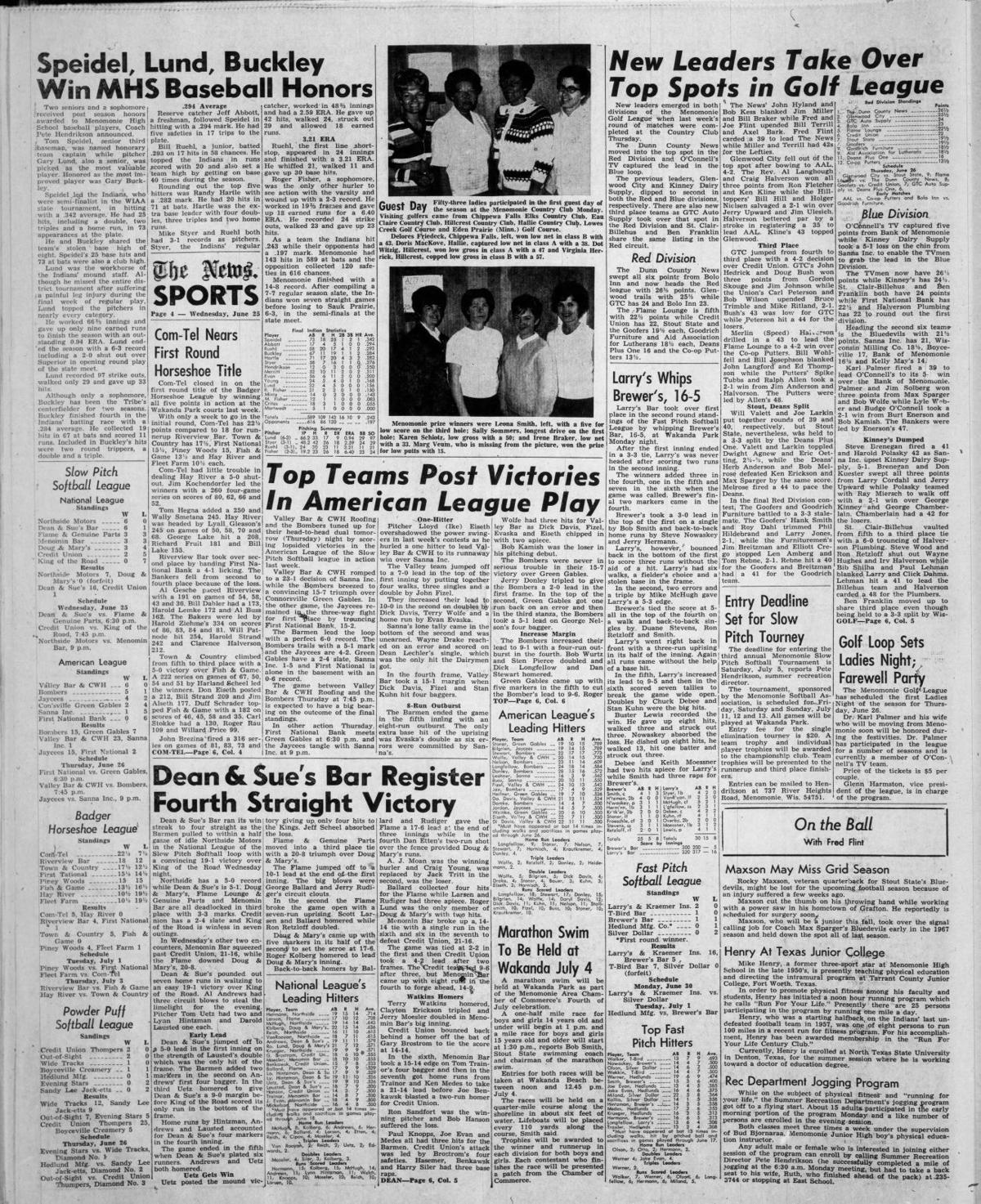 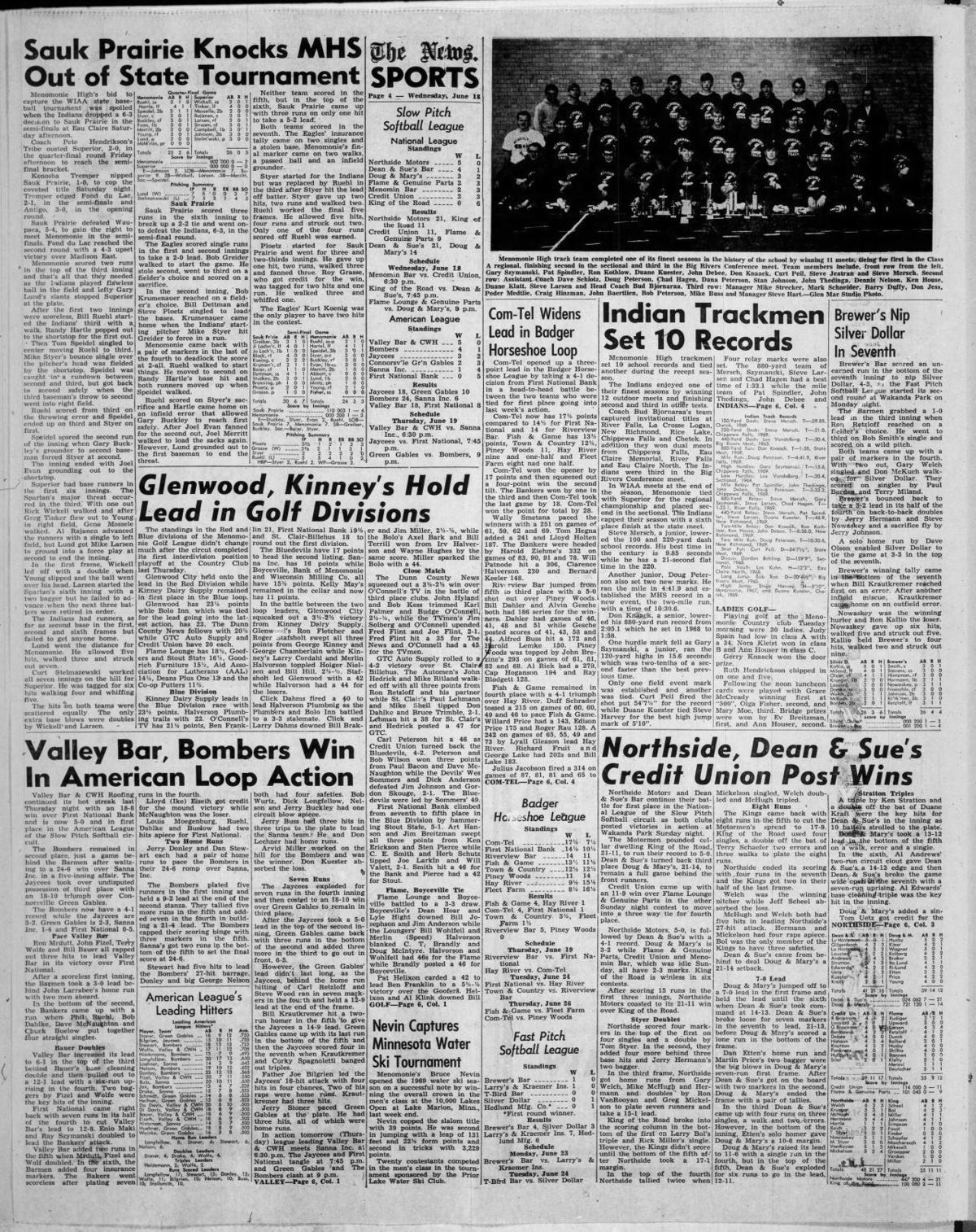 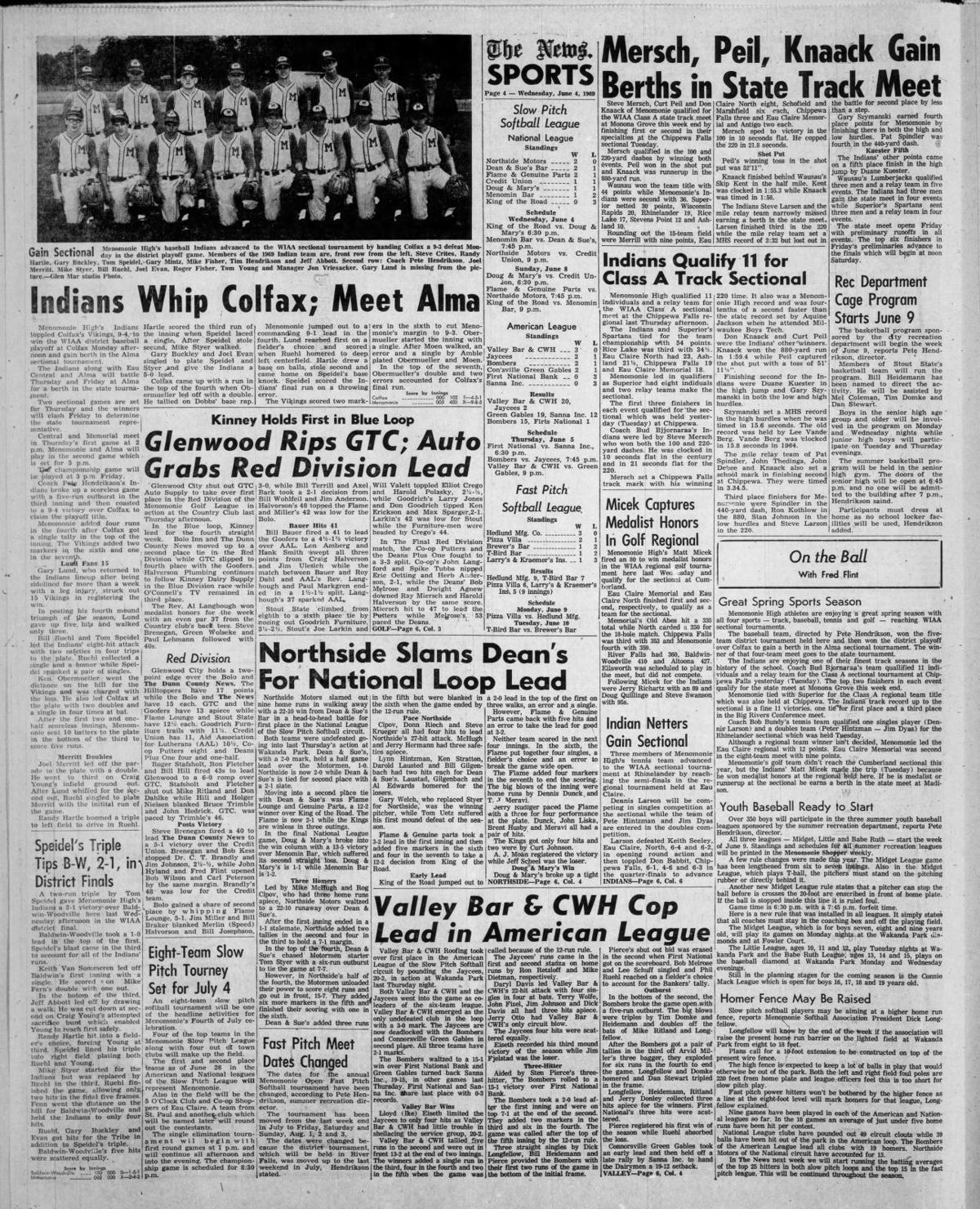 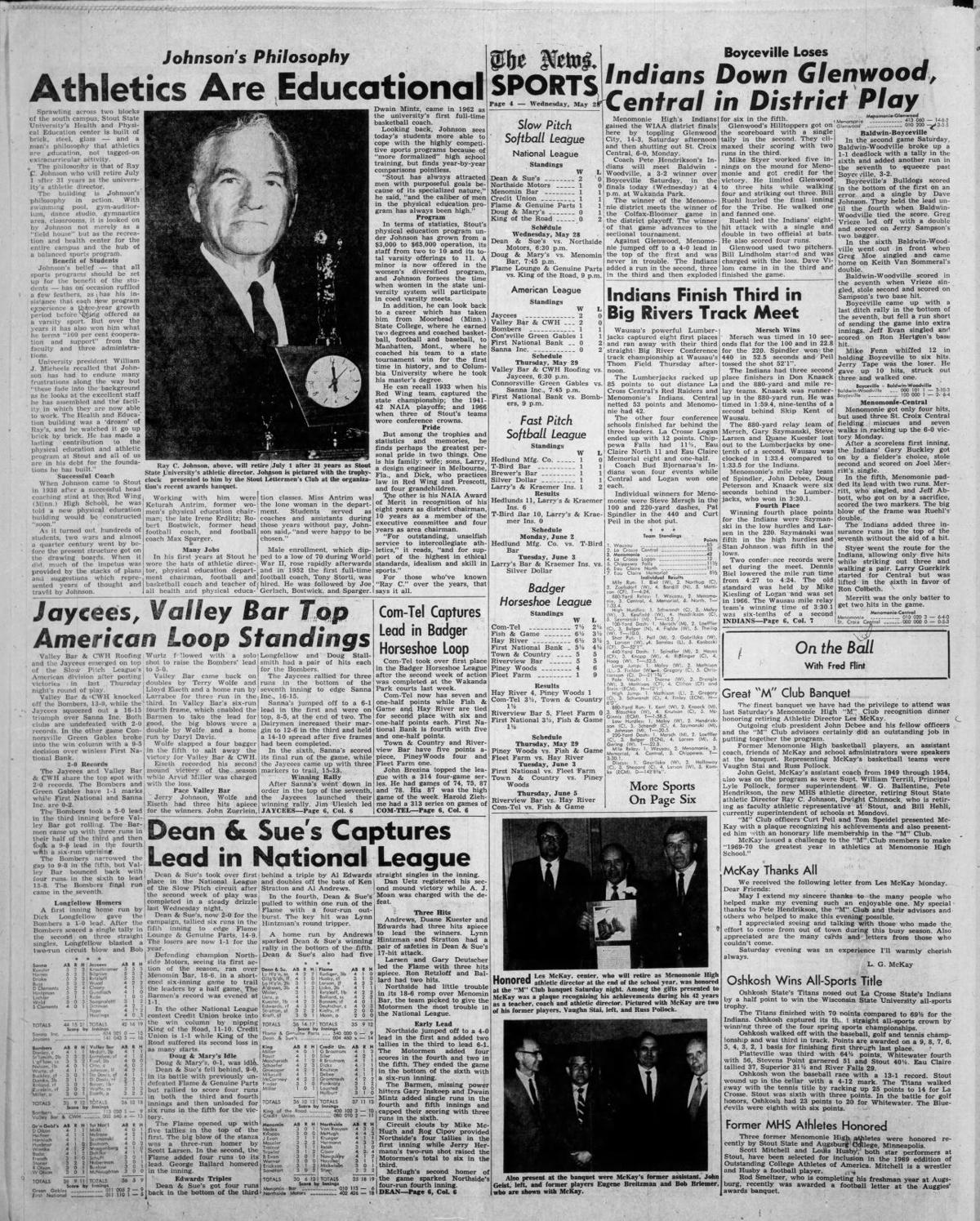 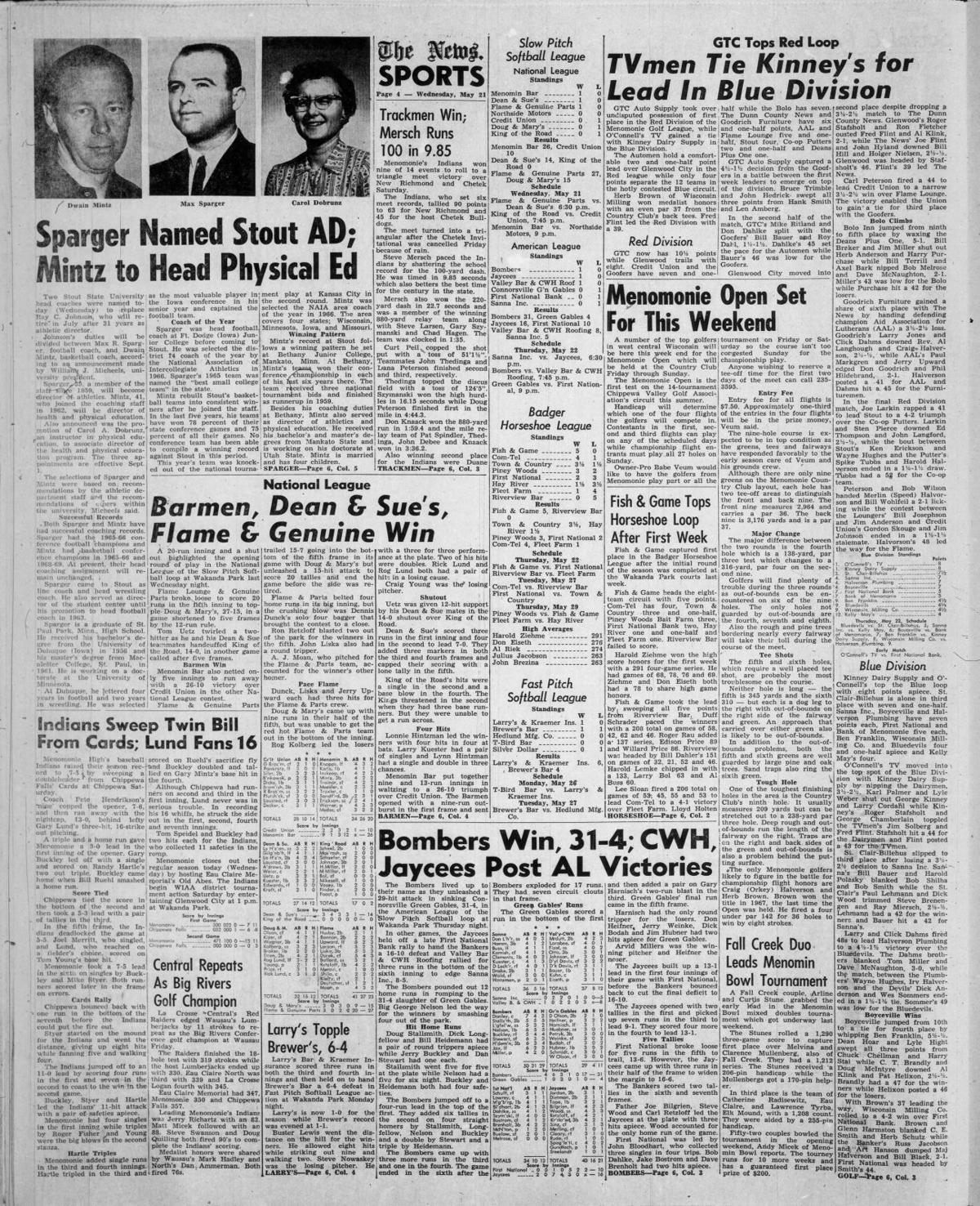 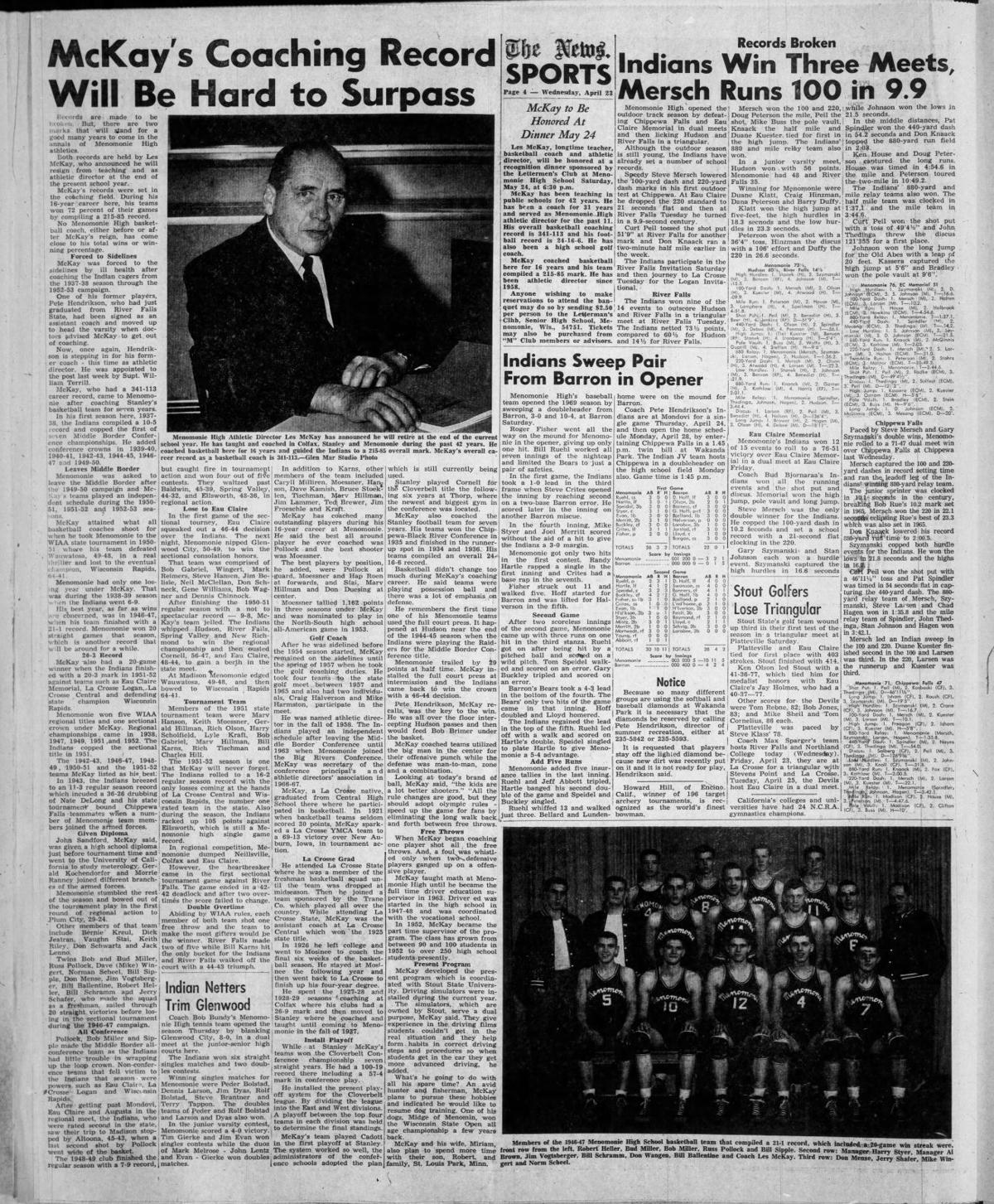 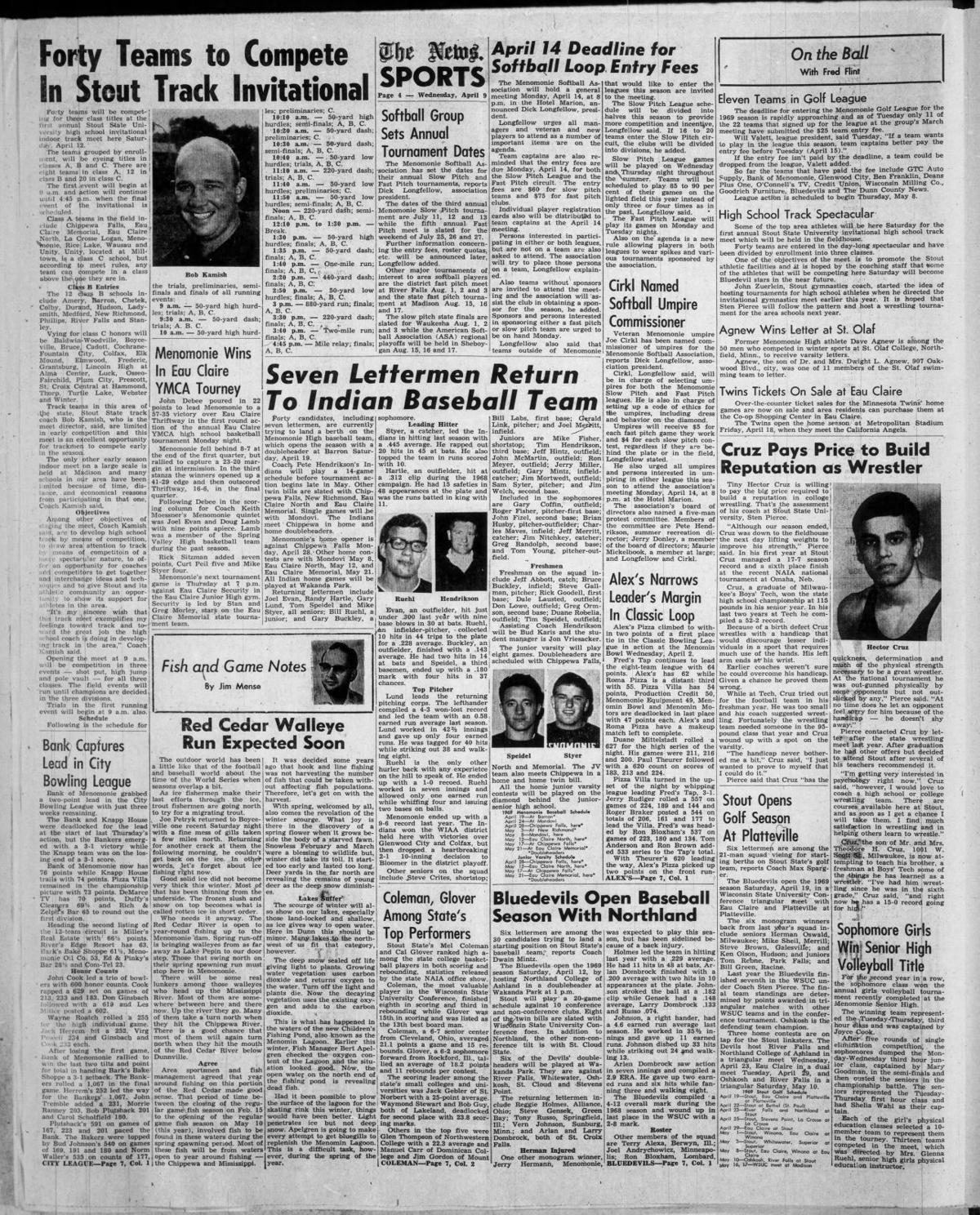