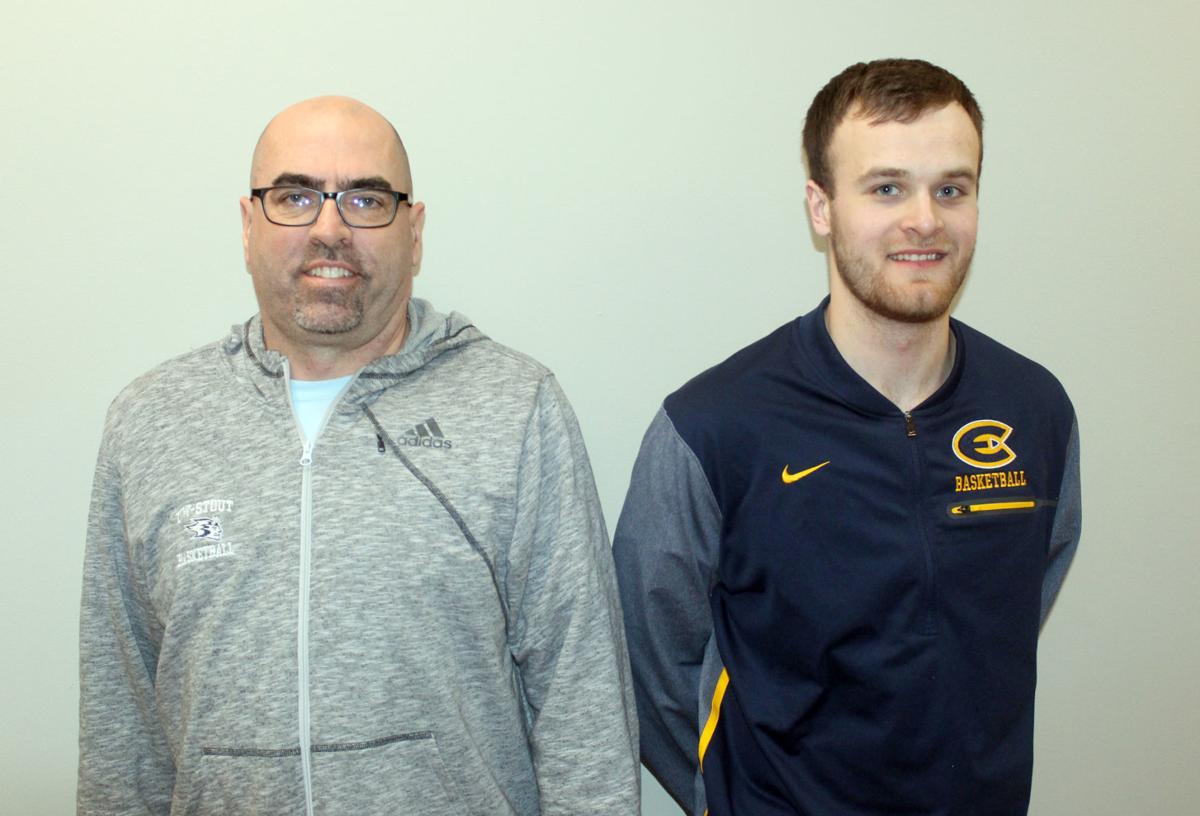 Archie Sherbinow and Ben Retzlaff were the head coach and all-state guard on the 2016 Division 5 state championship Chippewa Falls McDonell boys basketball team. They'll share the floor again on Saturday, this time as opponents at the college level. Sherbinow is in his first season as an assistant coach for the UW-Stout men's basketball team while Retzlaff is in his second season as a student assistant coach. 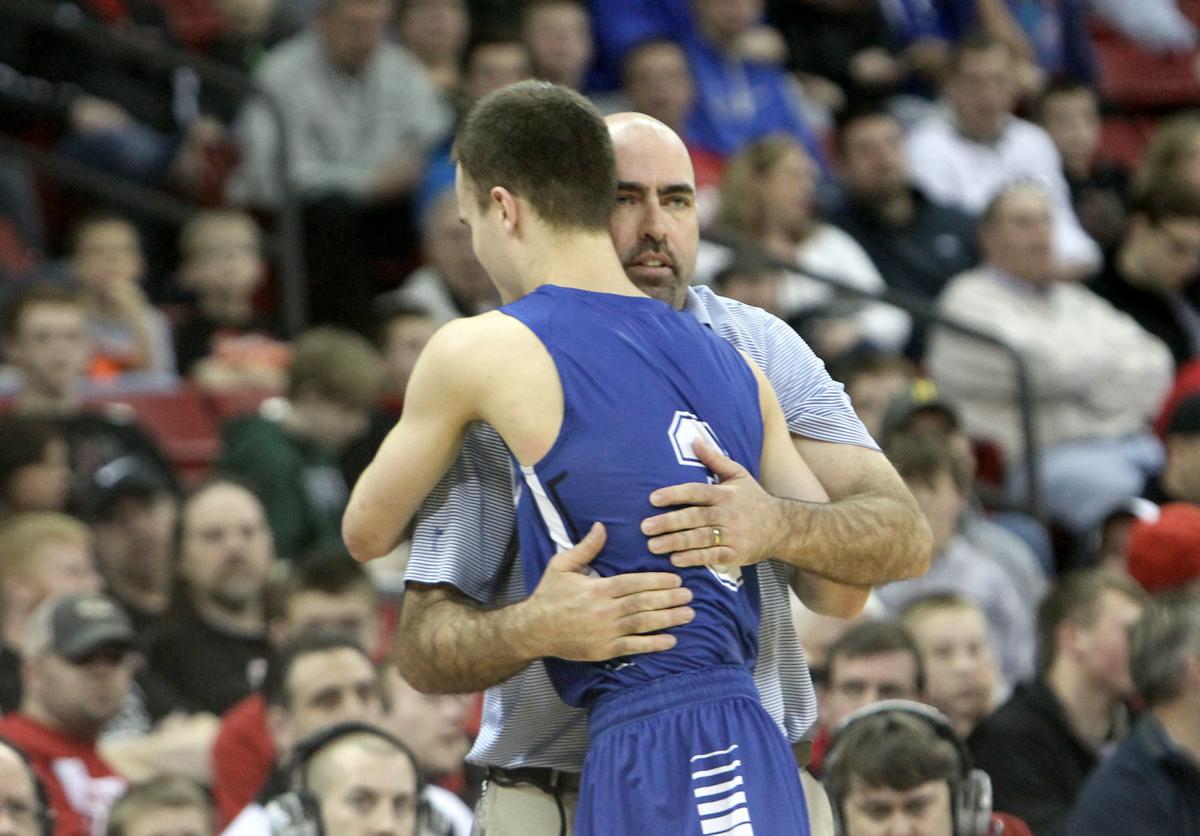 A lot has changed for Sherbinow and Retzlaff since that day, but the duo will share the court again this Saturday evening at 7 p.m. at Zorn Arena in Eau Claire — this time as opposing assistant coaches with UW-Stout and UW-Eau Claire.

Sherbinow joined the staff at UW-Stout last fall after stepping down as the head coach of the McDonell boys basketball team.

He then accepted a teaching job in the Stanley-Boyd school district.

Initially, Sherbinow was planning to spend his down time in the winter watching Retzlaff and other former players and acquaintances play during the Wisconsin Intercollegiate Athletic Conference season. But that plan change once he chatted with Lake, who he previously talked to after he was hired as head coach at Stout in the spring of 2018.

“I don’t know that I could’ve fallen into a better spot,” Sherbinow said. “They’ve been very welcoming to me and I think another lucky thing is our philosophy is pretty similar with what we’re trying to do. That’s made it a little easier for me.”

Sherbinow’s days are kept busy as he goes from his day job as a physical education teacher at Stanley-Boyd to Menomonie for practices and games. He accomplished plenty during his 15 seasons leading the Macks with a 239-135 record while leading his team to four state tournament appearances, most recently a Division 5 state runner-up finish last season.

Lake has given Sherbinow a wide variety of tasks with the team as the longtime prep coach has gotten used to coaching at the next level. He’s also the coach with the strongest local connection, a valuable resource for a staff with many out-of-state coaches.

“I’m happy with where I’m at,” Sherbinow said. “The teaching job at Stanley is great. It’s a great school district. I’m enjoying that. I don’t really need a reason and I’m not looking for anything else. I am enjoying what I’m doing right now and it’s been rewarding.”

Retzlaff, meanwhile, is in his second year with the Blugolds after graduating from McDonell in 2016. Retzlaff was a Division 5 all-state guard and the 2015-16 Chippewa County Player of the Year and initially went to St. Norbert College in De Pere to continue playing basketball before leaving the program after a season and accepting a position on Siverling’s staff.

In his second season as a Blugold coach, Retzlaff has more on his plate and is relishing the new challenges.

“Though I’m not playing, I’m loving the game like I did when I was a high school player,” Retzlaff said.

Last summer Retzlaff went around the country coaching at youth camps including Dayton University and Iowa State University, along with running Sherbinow’s McDonell camp before he stepped away from the program.

The duo often talked about the college game while Retzlaff was a player for Sherbinow and the player always felt his coach had what it took to fit in at the higher level.

That materialized last year and Retzlaff quickly became a valuable person for Sherbinow to reach out to for advice about moving on to being a college coach.

Bringing home a Division 5 state championship with a 63-41 victory over Catholic Central on March 19, 2016 is something both player and coach will always treasure, but now each is focused on their college responsibilities.

For Sherbinow, that means learning all that he can in his first season to help to become a more well-rounded coach to help Lake and the rest of the staff the best he can. And for Retzlaff that means continuing to grow and possibly be in a position to move into the coaching ranks after he graduates from Eau Claire.

Retzlaff is a public relations major but would like to try to be an assistant coach at the collegiate level after he graduates.

“This year it’s become really clear with the development that I might be able to make something out of this and Coach (Siverling) has been fully supportive of making sure I’m getting the right experiences and responsibilities now so that I’m more appealing for whatever that next job opens up,” Retzlaff said.

Saturday’s contest won’t be the first matchup of familiar foes for either Sherbinow or Retzlaff.

This past weekend, Sherbinow’s Blue Devils fell in a tight matchup to UW-Platteville, a team managed by McDonell grad Jake Horan, who was also a manager for Sherbinow with the Macks. Sherbinow will see another former member of the 2016 McDonell title team on Wednesday when the Blue Devils play at UW-River Falls against Alex Ohde, the 2016-17 Chippewa County Player of the Year.

The WIAC also has plenty of other local connections including Chippewa Falls grad Aaron Knez (UW-Stevens Point) and on Sherbinow’s own Blue Devil team with Stanley-Boyd graduate Brady Booth. The Blugolds scored a 68-56 win at UW-Superior on Nov. 28, a team with recent Chippewa Falls graduate Thomas Robarge.

Both Sherbinow and Retzlaff are looking forward to Saturday and the chance to square off on the WIAC hardwood. They once shared a bench, but now they’ll be on opposing sidelines for a matchup of area rivals.

“I hope to go and give him an embrace before the tip and have a little moment,” Retzlaff said. “I think that’ll be something special and I’ll try to slow it down and not try to rush through that because he’s someone that is important and has meant a lot for me and the McDonell program too.”

Archie Sherbinow has stepped down after 15 seasons leading the McDonell boys basketball program.

Just go for it.

Archie Sherbinow and Ben Retzlaff were the head coach and all-state guard on the 2016 Division 5 state championship Chippewa Falls McDonell boys basketball team. They'll share the floor again on Saturday, this time as opponents at the college level. Sherbinow is in his first season as an assistant coach for the UW-Stout men's basketball team while Retzlaff is in his second season as a student assistant coach.