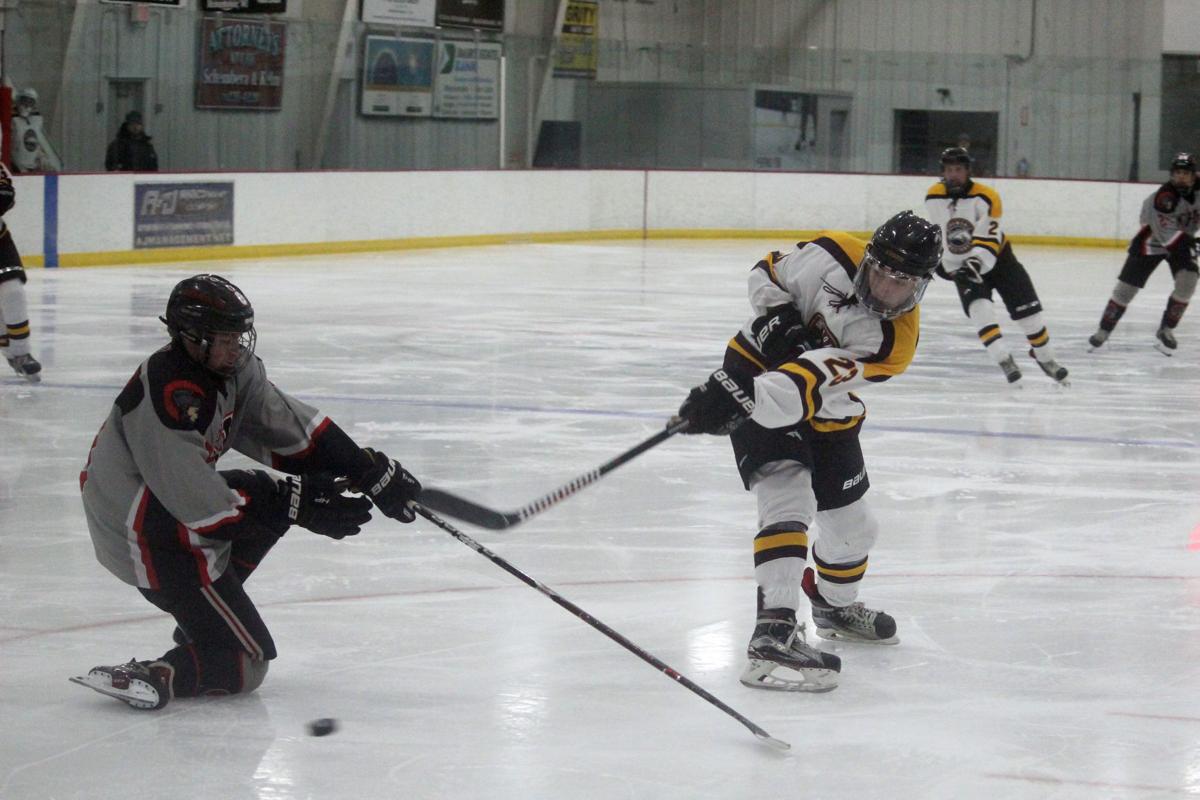 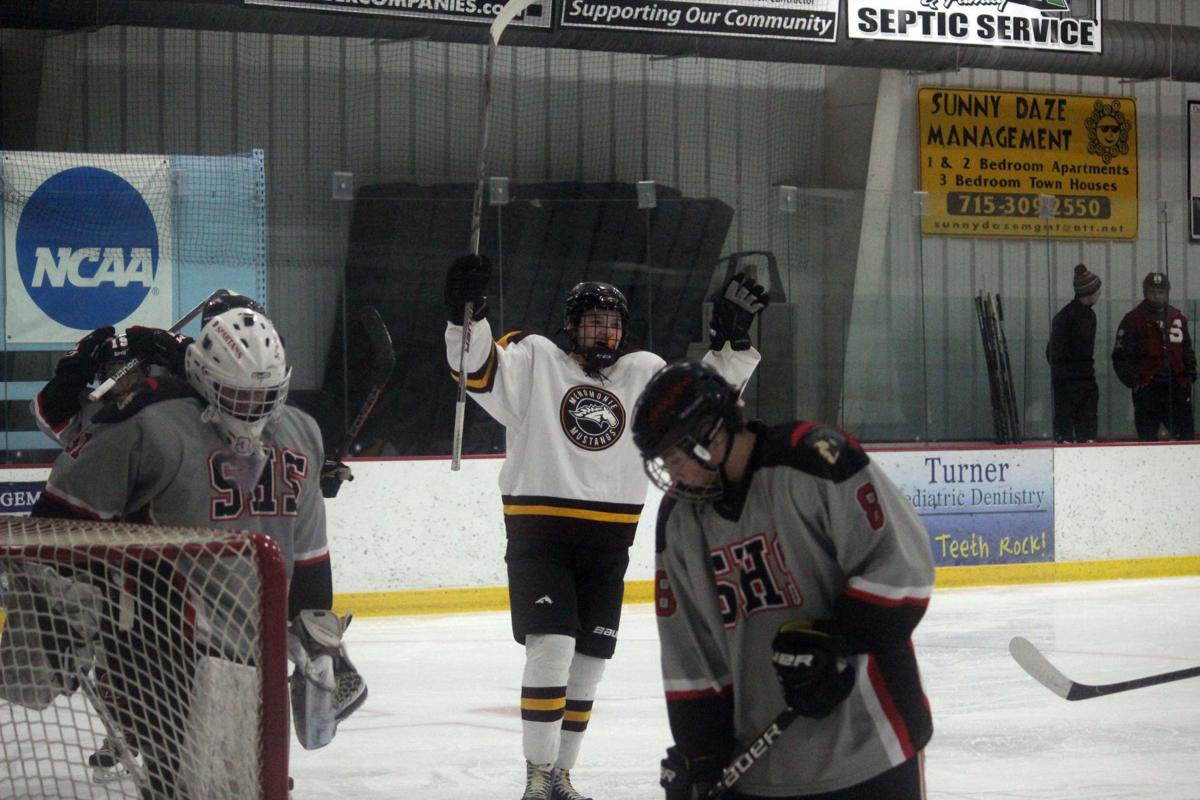 Menomonie's Evan Sisko (8) celebrates his goal in the third period Saturday in Menomonie.

Menomonie's Evan Sisko (8) celebrates his goal in the third period Saturday in Menomonie.

There were opportunities late to tie things up, but the Menomonie boys hockey team was unable to convert.

After falling behind by three in the second period, the Mustangs were twice able to make it a one-score game, but they couldn’t quite make it even in a 6-4 loss to Somerset on Saturday at Don Fanetti Ice Arena.

“We gave ourselves opportunities,” Menomonie coach Matt Ellis said. “That’s a heck of a goaltender they had down there — a good team, and we just weren’t able to get it by him.”

Kaleb Miller’s goal — assisted by Dominik Hendrickson and Sedric Yukel — with four minutes, 37 seconds to play in the final period pulled Menomonie (2-5) to within 5-4. Menomonie had a brief power play advantage after a Mustang penalty was quickly matched by the Spartans leaving both teams playing four on four for 1:36. Menomonie couldn’t get a shot past Somerset goalie Kaleb Bents and the Spartans added the empty net goal with seconds left to play.

Early in the third period a Somerset violation put Menomonie on a five-minute power play. The Mustangs made it a 4-3 game about two minutes into the advantage as Evan Sisko deflected a shot into the net with assists given to Colby Lee and Dieter Heim.

Somerset (3-3) had five penalties over the final two periods and Ellis was hoping to see better success in converting on those opportunities.

“I think we did miss a few chances to score some goals. Especially on a five-minute power play we got to be able to score more than one,” Ellis said.

Somerset pushed its lead back to two with a goal at the 5:25 mark of the final period.

“I think just getting pucks to the net, having guys around the net making things uncomfortable (was key),” Somerset coach Dan Gilkerson said.

The Spartans broke the game open with two goals in fewer than a minute during the second period. Kieran DeFoe scored with just fewer than nine minutes left in the second and then Beaudee Smith made it 4-1 with 8:05 left.

Clasen Cook took advantage of power play by scoring with 1:10 remaining in the second as Menomonie closed to within 4-2. An assist was given to Miller.

The Mustangs evened the score at 1-1 as Tanner DeMarce pushed one into the net in the final minute of the first period. Miller and Hendrickson assisted on the goal. The Spartans quickly responded to take back the lead 30 seconds later.

Somerset outshot the Mustangs 45-30. Thomas Isenberger made 39 saves for Menomonie.

“I think it was a hard fought game from two teams that are going to have to see each other in the playoffs, most likely, and we just hope we get another chance to play against them and right the ship,” Ellis said.

Menomonie returns to Big Rivers Conference play Thursday when the Mustangs host Eau Claire North. After four losses in its last five games, Ellis said the team had a meeting so they could refocus on what they need to do to be successful. While Saturday’s game didn’t result in a win, Ellis felt his team took some positive steps forward.

“I think the guys came together and realized they have to play more as a team and defensively. So we battled hard...” Ellis said. “I saw a lot of good opportunities, it just didn’t go our way.”

Photos from the Menomonie boys hockey team's game against Somerset at Don Fanetti Ice Arena in Menomonie on Saturday, Dec. 14, 2019.