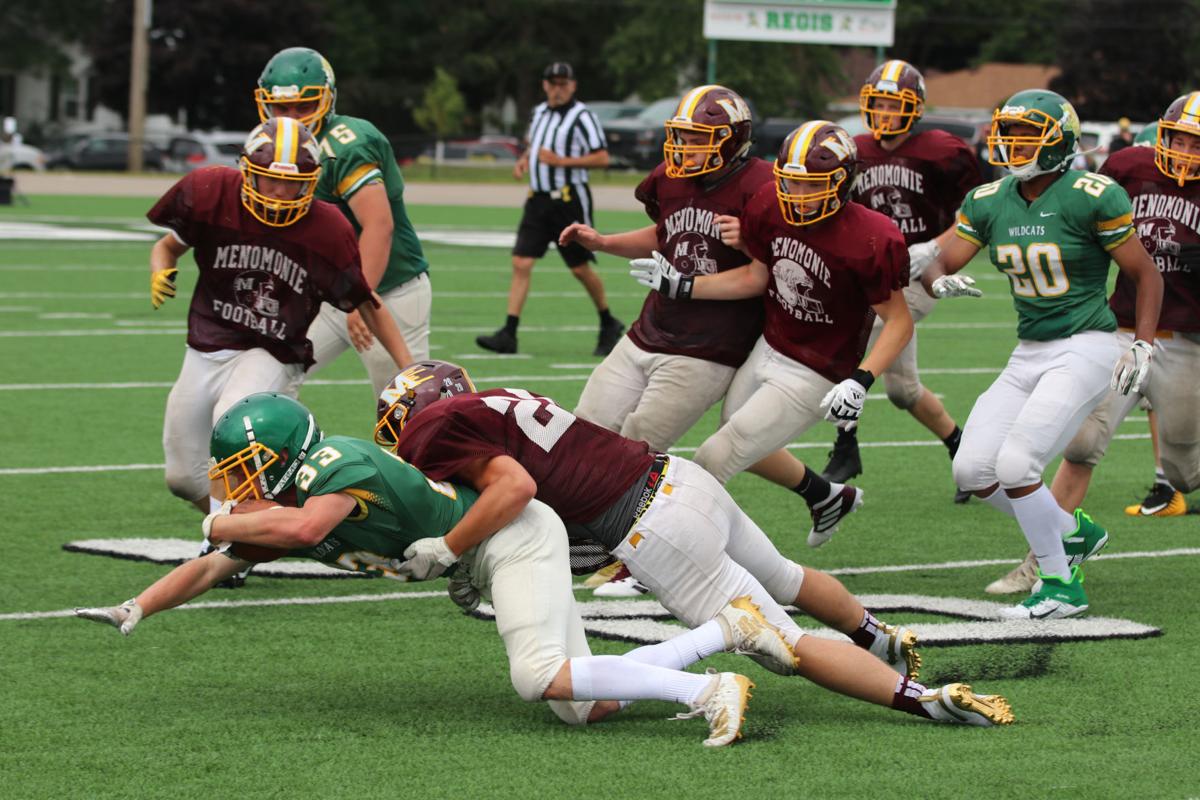 Menomonie's Kaleb Miller makes a tackle on an Edgar ball carrier at a scrimmage hosted by Eau Claire Regis on Friday. 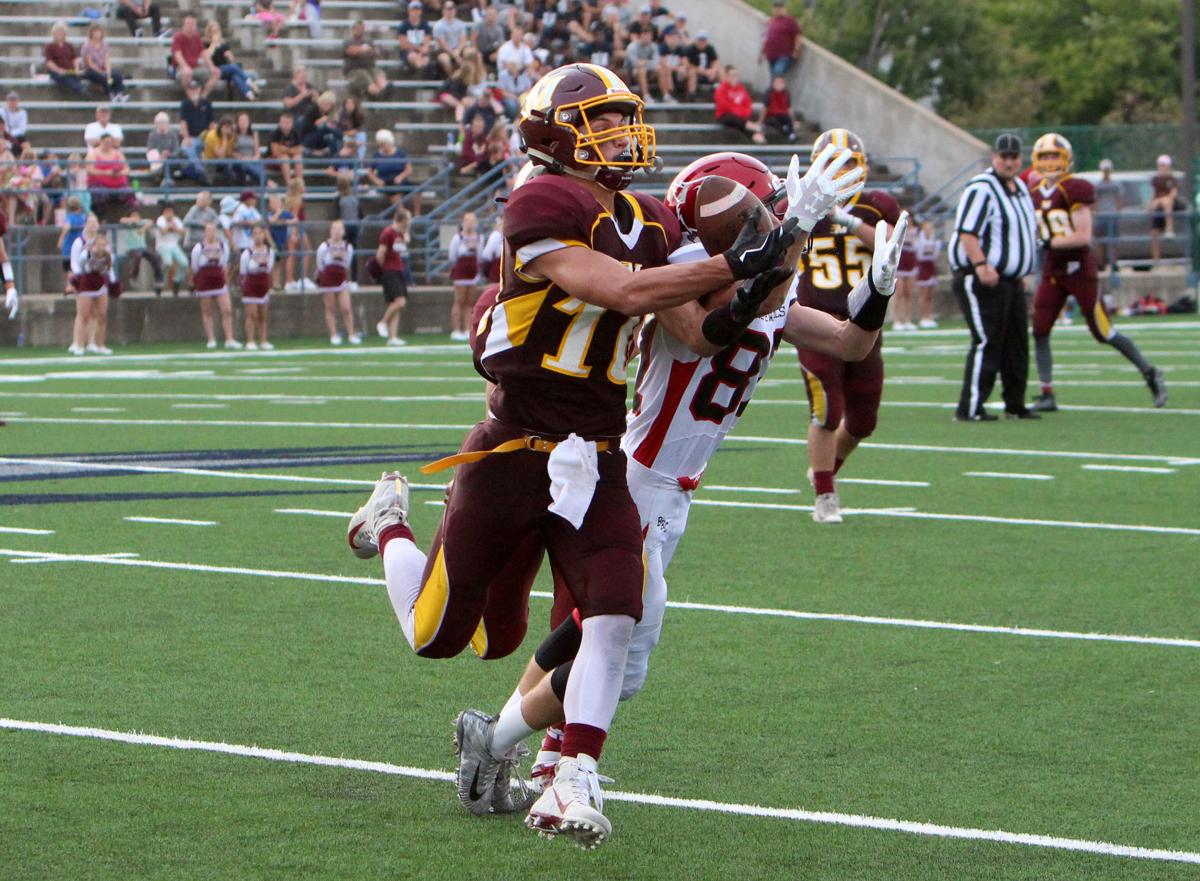 Menomonie's Kaleb Miller makes a tackle on an Edgar ball carrier at a scrimmage hosted by Eau Claire Regis on Friday.

Thrust into roles a season ago, the added experience should pay dividends for the Menomonie football team.

With a high volume of returning players this season the Mustangs look to once again push for a Big Rivers Conference championship and continue its long playoff streak.

“We hope to reap the benefits of playing all the young kids last year but it’s going to be a dog fight,” Menomonie coach Joe LaBuda said.

The Mustangs finished 7-3 overall and in a three-way tie for second place at 5-2 in the Big Rivers, a game back of champion River Falls. Each of the team’s three defeats came by a touchdown or fewer and with many of the starters having a full year under their belt the Mustangs look to turn those close losses into wins.

The defense should be formidable returning eight starters from a group that allowed 15.5 points per game last year. Davis Barthen is back to anchor the defense after being a first team all-conference selection at defensive back last year. The senior was also a Wisconsin Football Coaches Association all-state honorable mention in 2018.

Menomonie will need to fill the production left behind by Sam Thompson a first team all-conference linebacker. Thompson are garnered first team accolades on offense along the line. Gone also is Kade Schultz the team’s leading rusher last season. Schultz racked up 537 yards and seven touchdowns on 115 attempts.

Also on offense Menomonie will be without first team receiver Sam Zbornik. Zbornik had a team-high 24 receptions while piling up 378 yards and a team-best six touchdowns. The now departed Logan Sorenson was a second team specialist for his kickoff and punt returning ability but he also made plays in the passing game with 15 catches for 248 yards.

While the Mustangs do bring back a strong group of starters offensively they will need to fill the shoes of two-year starting quarterback Jake Ebert. LaBuda said there is a two-player battle to lead the offense with senior Tyler Werner and junior Ryan Kahl fighting to take over at quarterback. With limited experience at that position LaBuda expects to ease in the winner of the job. Once they grow comfortable more will be asked of the new quarterback.

“It’s going to be a work in progress as we go,” LaBuda said of his quarterbacks. “Early in the year we’re not going to ask them to win games for us, just going to have to manage the team and not put too much pressure on them right away and then as the season goes on we’ll ask them to do a lot more than that.”

What could help ease the transition of the quarterback is Menomonie bringing back a strong staple of runners and receivers.

The trio of Zach DeMarce, Poplawski and Will Ockler should see expanded roles replacing the carries Schultz had last season. DeMarce ran for 189 yards on 39 carries, Poplawski toted the rock 33 times for 158 yards and Ockler saw just 17 attempts but he made the most of them racking up 149 total yards.

Menomonie begins the season on Thursday evening at Lake Mills before a tough nonconference contest Aug. 29 for the team’s home opener as the Mustangs welcome Holmen. LaBuda said Holmen is one of the better Division 2 teams in the state as it also brings back a large group of returning starters from last year. While the Vikings will provide a tough test LaBuda looks for the game to building block prior to the Big Rivers Conference slate starting up.

LaBuda expects quite the battle for the Big Rivers title this season similar to a season ago. He said any number of teams could end up on top and each and every week will feature stiff competition. He sees an improved Superior and Eau Claire Memorial being able to provide challenges for the top-four finishers in the conference last season in River Falls, Menomonie, Hudson and Rice Lake.

“The league is going to be tremendous across the board,” LaBuda said of the Big Rivers. “I really don’t know if anybody will pull away from everyone in the league. I think it’s going to be a battle every week.”

To set themselves apart Menomonie will look to lean on the group of returning players and the growth the team made over the offseason.

“We got a really good group of kids. I really like this team. The kids have been extremely committed all summer,” LaBuda said.

Prep Football Preview: Elk Mound up to the challenge in replacing departed talent