But now he’s stepping aside and turning the program over to another familiar face as his daughter Courtney will take the reigns for the Vikings with Joe remaining with the team as an assistant coach.

Courtney has spent the last several years as an assistant for Joe, and he said the time is right to make the transition.

Joe has compiled a 639-144 record in his 30 seasons leading the Vikings with his 639 victories the fourth most in state history and his .816 winning percentage is ninth-best in Wisconsin history.

He has led Colfax to 21 Dunn-St. Croix Conference championships and three trips to the state tournament with a Division 4 runner-up finish in 2013. The program won its most recent DSC championship this past season as the Vikings went 21-4 and advanced to the Division 4 sectional semifinals before falling to Unity.

Colfax’s first trip to state came in 1994 when the Vikings topped Flambeau 56-54 in the Division 4 sectional championship before being nipped by Niagara 52-51 in the state semifinals. The Vikings returned to state 14 years later with both Doucettes in tow after a 59-55 Division 3 sectional title victory over Osseo-Fairchild. Courtney led the Vikings with 13 points in the team’s 41-35 state semifinal defeat against Markesan.

The Vikings program came home with hardware in its third trip to state when Colfax fell to Algoma 46-30 in the Division 3 championship game after defeating The Prairie School 42-41 in the semifinals.

While teaching social studies in Winter, Joe heard of a physical education teaching position opening in Colfax from Ron Fandry, who worked in the same district and would go on to become the Colfax High School principal.

Joe was hired to the position in the Colfax and was also hired as the program’s head coach and would spend his next 30 years growing a consistently strong team built on the foundation of hard work.

“I’ve just got great memories. I guess the one thing I’m most proud of is we did it the right way,” Joe said of his tenure leading the program. “We worked hard and like we asked our kids we did it with integrity, we did it with character and it’s been great. I’ve just been fortunate. I think some of the cornerstones of (it are) getting great people involved with your youth program and getting get assistants and just working hard and having fun with it. My wife has been a big supporter and has done a lot behind the scenes.”

Courtney is certainly familiar with those principles after starring for the Vikings in the late 2000s including for the team’s 2008 Division 3 state qualifier before a four-year career on the court at the University of Minnesota-Duluth. Courtney currently stands third in Bulldog program history for 3-pointers attempted (599), fourth in 3-pointers made (144) and was second on the team in scoring in her junior and senior seasons.

Colfax graduated an eight-player senior class from last year’s regional championship with the departure of Taylor Irwin, Morgan Schleusner, Jayna Bowe, Kameri Meredith, Josie Steinke, Addy Olson, Saville Wilson and Rachel Scharlau, but Joe has confidence in both the players he has returning as well as the new head coach the program will have leading the way.

“We’ve passed the test of time,” Joe said. “We’ve had a lot of kids come in and there’s definitely a lot of tough losses that ended a lot of good year but we tried as hard as we could and we’re real happy with the effort we put in and I wish a couple of those tough losses at the end of the year were different but we really tried hard and tried to do it in a classy way. The one thing we’ve always done is try to impress our fans with our hard work and team work and I think for the most part we’ve been able to do that over the years.” 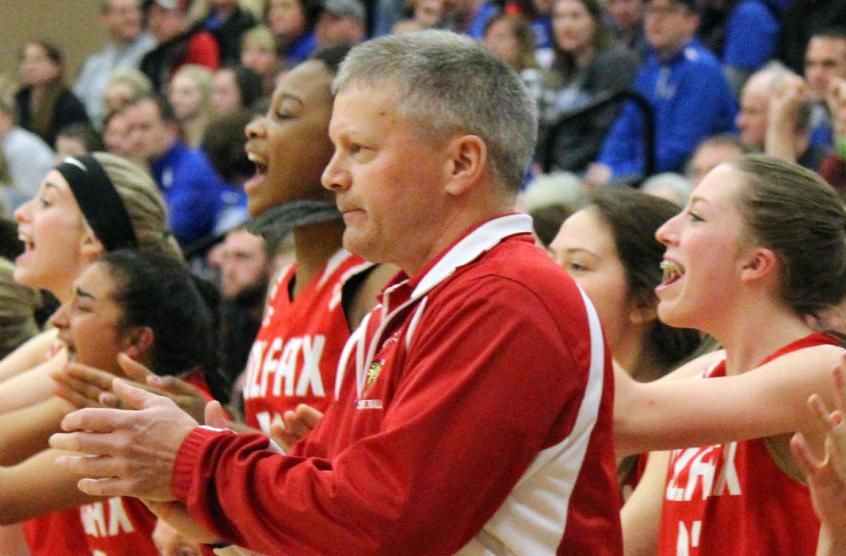 Colfax Viking head coach Joe Doucette, middle, and players jump to their feet in celebration after sophomore Morgan Schleusner drained a free throw to set the Vikings ahead 49-47 against the Cameron Comets with 17 seconds remaining in the second half of a Division 4 Sectional Semifinal at New Richmond High School in March 2018. 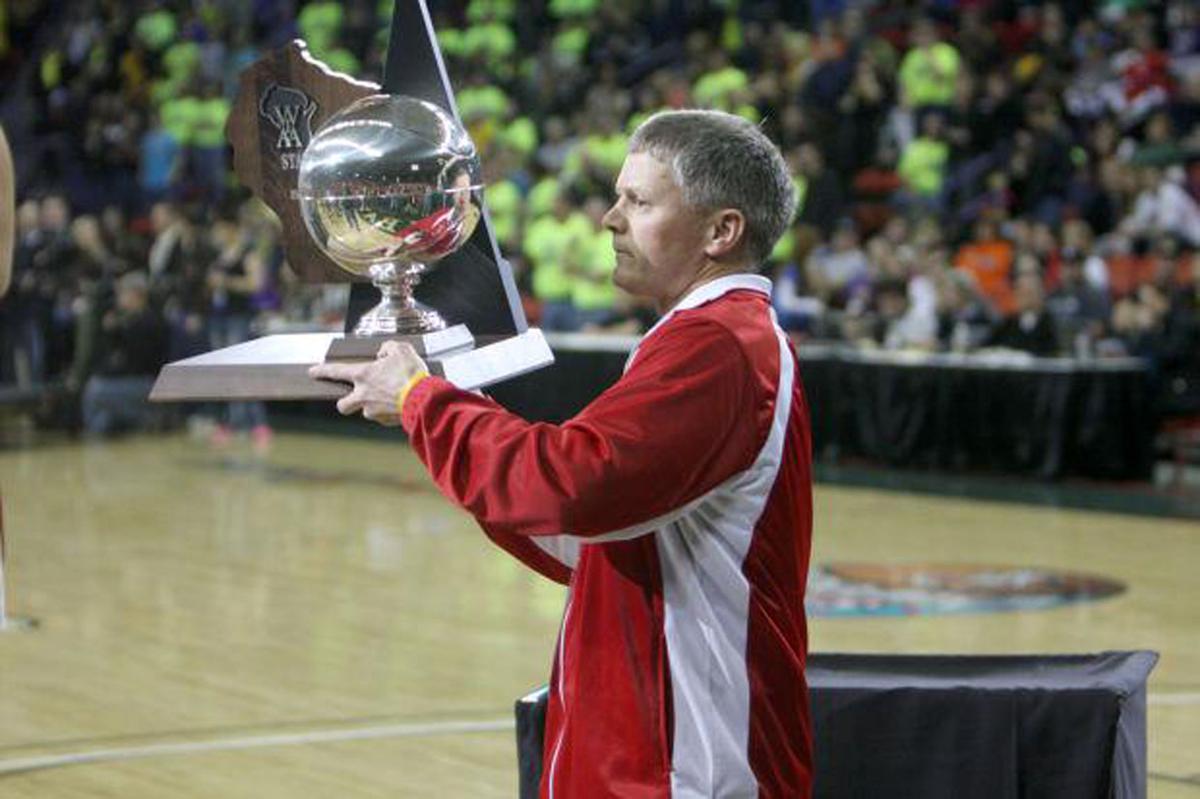 Colfax coach Joe Doucette is presented with the Division 4 state runner-up trophy following his team's game against Algoma in Green Bay in 2013. 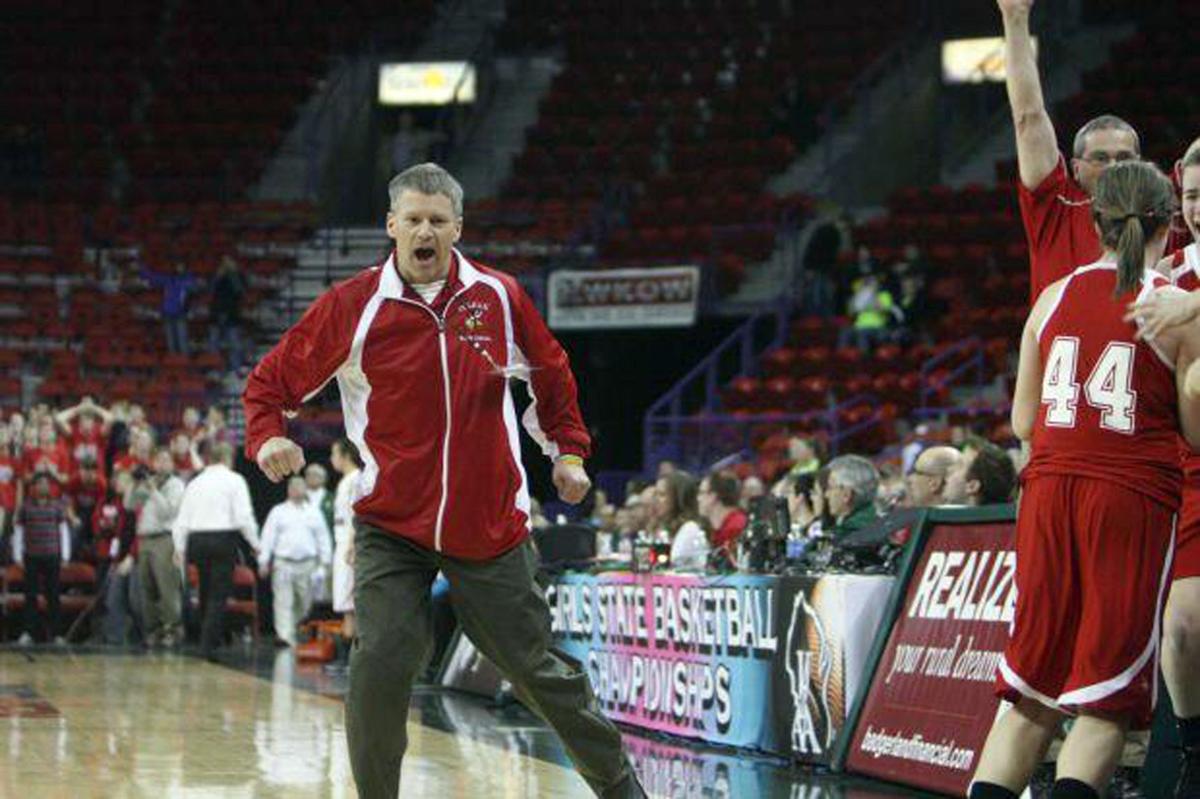 Colfax coach Joe Doucette celebrates after his team defeated The Prairie School 42-41 in the Division 4 state semifinals in Green Bay in 2013.