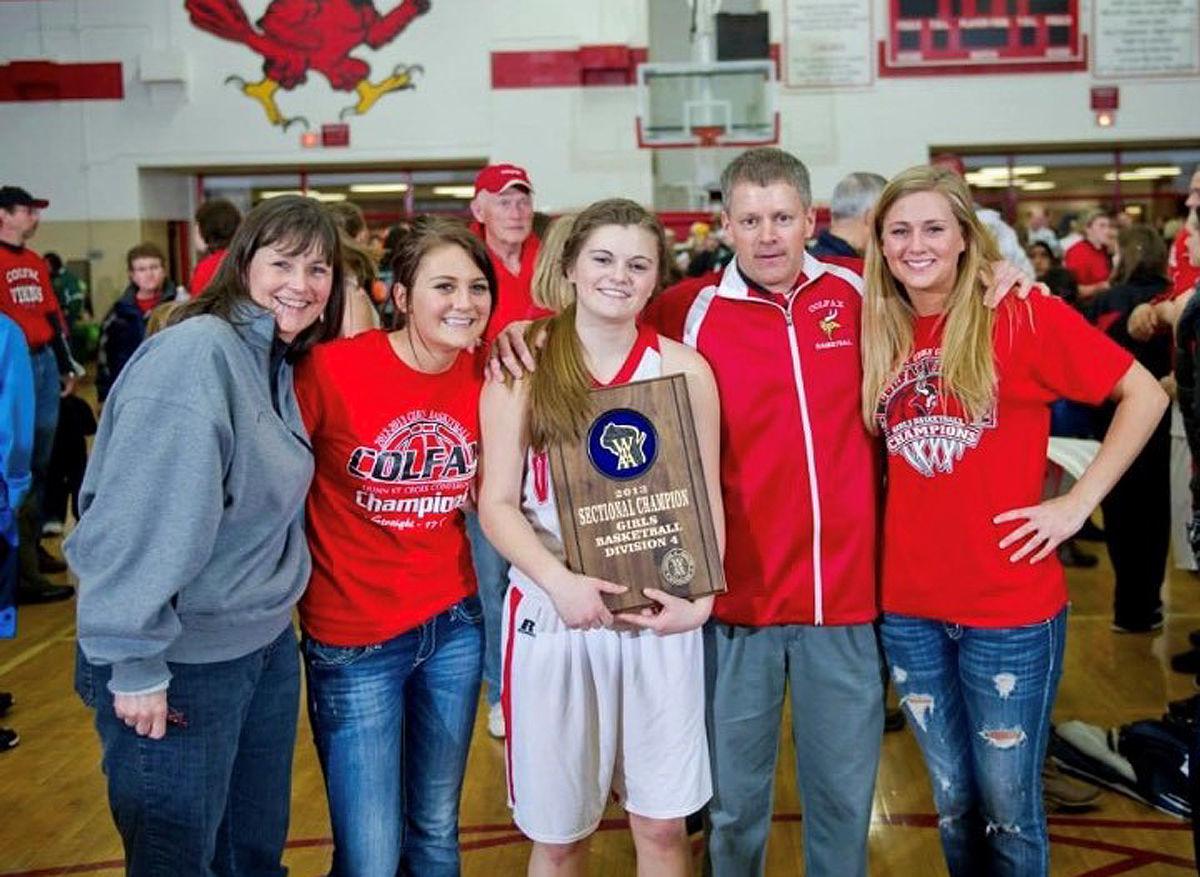 Tracy, Sam, Mallie, Joe and Courtney Doucette pose for a photo after the Colfax girls basketball team's sectional championship in 2013 in Chippewa Falls. Courtney Sarauer (Doucette) is taking over as coach of the program, replacing her father Joe. 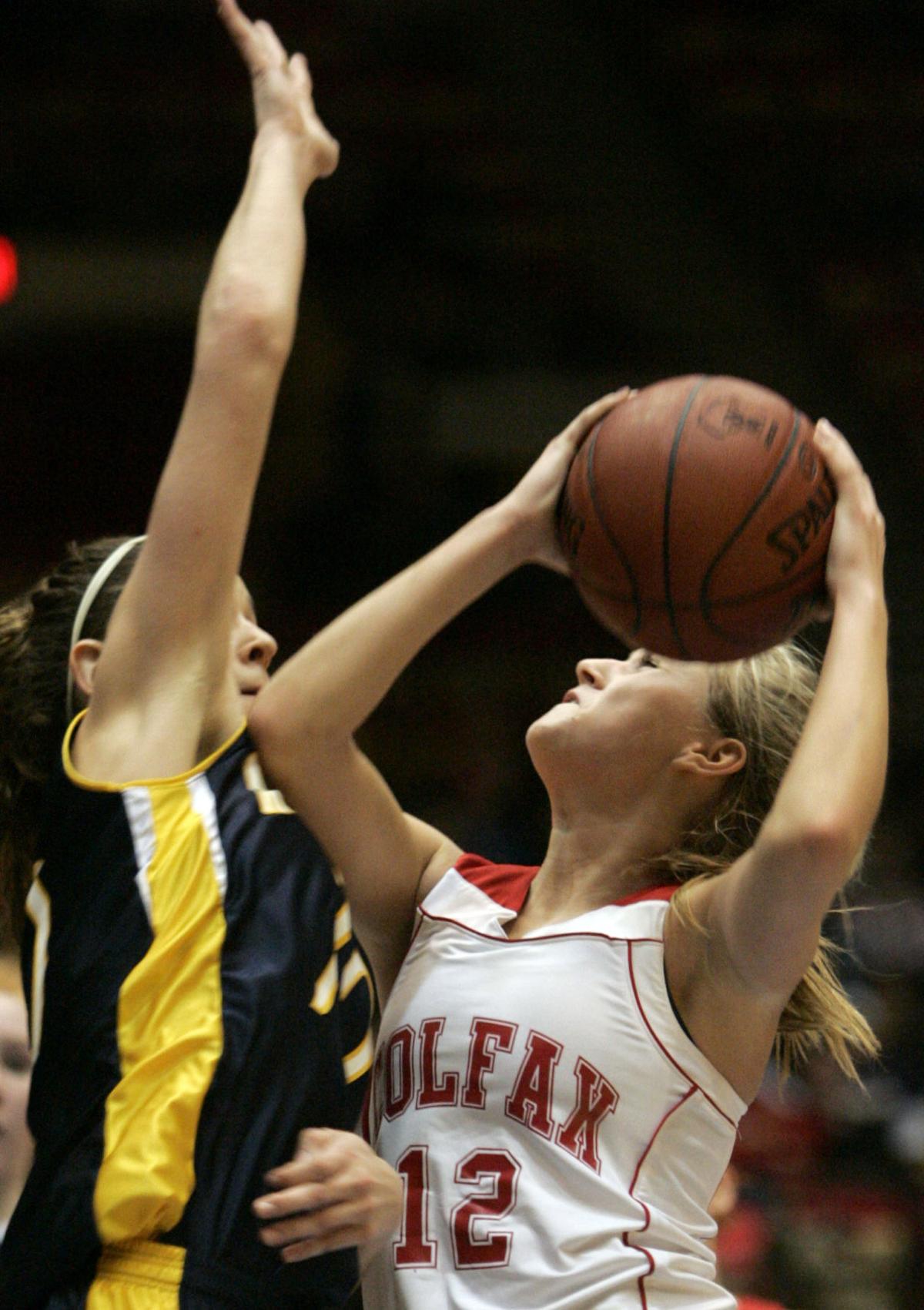 Colfax' Courtney Sarauer (Doucette) (12) shoots against Markesan's Marieanna Dulas during the second half of a WIAA Division 3 semifinal basketball game on March 13, 2008 in Madison.

In fact, it was quite an event when she was first introduced.

Sarauer (Doucette) is taking over the Vikings program as head coach for her father Joe Doucette, who stepped down recently after 30 years and 639 victories with Colfax. Sarauer has been on Joe’s staff for the previous five seasons after helping the Vikings reach the Division 3 state tournament in 2008 as a player before playing for four years at the University of Minnesota-Duluth.

Joe’s daughters Sam, Courtney and Mallie all played big roles for the Vikings during their playing days with Courtney being born during Joe’s first year in Colfax.

“My mom always jokes that my dad has only missed half of a practice in his whole coaching career and it was the day I was born,” Courtney said.

Sarauer is a teacher in the Colfax district and admitted that becoming a coach was something she had to grow into.

“We’ve been talking about it for a while. When I first joined his staff, I never really coached before so I still had the playing mentality. I would say it was hard for me to adjust at first because I still wanted to play at that point,” Courtney said. “I didn’t want to be the coach I wanted to continue to play but after a few years I really learned to love coaching and the different aspects that it brings to the game and I was able to learn a lot from him and John Dachel as well. We just felt after my few-year experience I was ready for a change and he was ready for a change too.”

Joe is staying on staff as an assistant, providing decades worth of experience and knowledge along with an even-keel hand to help in those stressful games and moments.

“I think the biggest thing that he’s taught me is to have more patience,” Courtney said of Joe. “He’s been doing it for so long. He’s been around the block, he’s seen it all, been in every situation and just to see how he handles certain stressful situations and he is able to stay calm and collected and not get frustrated or anything like that, I feel like that was my biggest learning point from him.”

Colfax is coming off a Dunn-St. Croix Conference championship — the 21st in Joe’s 30 years leading the team — and a trip to the Division 4 sectional semifinals. The Vikings graduate a strong class of seniors, but Joe is confident in Courtney’s ability to lead and the group the team has returning.

“She’s competitive but she’s a good mix of she’s going to let you know what she feels but she’s caring and has got a huge heart,” Joe said of Courtney. “She’s been part of this program for a long time and she believes in some of the cornerstones that we’ve always had and I think it’ll be a smooth transition and I’m looking forward to it. I’ve been fortunate to have many great assistants with Courtney included and the number one thing an assistant has got to do is be loyal and I can’t wait to see how things will go.

“We had a great senior class but I think some of our kids that are back are going to shine when it’s their time and we’re just super excited and looking forward to it.”

Sam and Courtney are one year apart while Mallie is several years Courtney’s junior, but all three were able to share in trips to the state tournament under Joe. Sam and Courtney were a part of the Division 3 2008 team that defeated Osseo-Fairchild 59-55 for a sectional championship before falling to Markesan 41-35 in a game where Courtney led the team in scoring with 13 points. Mallie was the starting point guard for Colfax’s most recent state qualifier in 2013, helping lead the team to a Division 4 state runner-up trophy.

“Growing up and playing with Sam and then having our dad be our coach was pretty special,” Courtney said. “I think maybe we didn’t see it at the time but looking back we realized how lucky we were to be able to experience that as a family.”

All three sisters went on to play collegiately with Courtney still among program leaders at UM-D in career 3-point attempts (third, 599) and made 3-pointers (fourth, 144).

Just as she will be for coaching advice, Courtney will also be able to lean on Joe for advice of how to coach with a growing family. Courtney and her husband Todd are expecting and with the baby’s debut imminent, the youngster will be entering the world the same way mom did — just as a Doucette was starting as a coach in Colfax — and will join a community Courtney is happy to still be part of.

“Colfax is a very supportive community,” Courtney said. “They’ve always been wonderful for the basketball program and it’s fun to just continue that legacy that he’s created for this community. It’s something everybody loves and I would say wants to see that continue.”

Tracy, Sam, Mallie, Joe and Courtney Doucette pose for a photo after the Colfax girls basketball team's sectional championship in 2013 in Chippewa Falls. Courtney Sarauer (Doucette) is taking over as coach of the program, replacing her father Joe.

Colfax' Courtney Sarauer (Doucette) (12) shoots against Markesan's Marieanna Dulas during the second half of a WIAA Division 3 semifinal basketball game on March 13, 2008 in Madison.