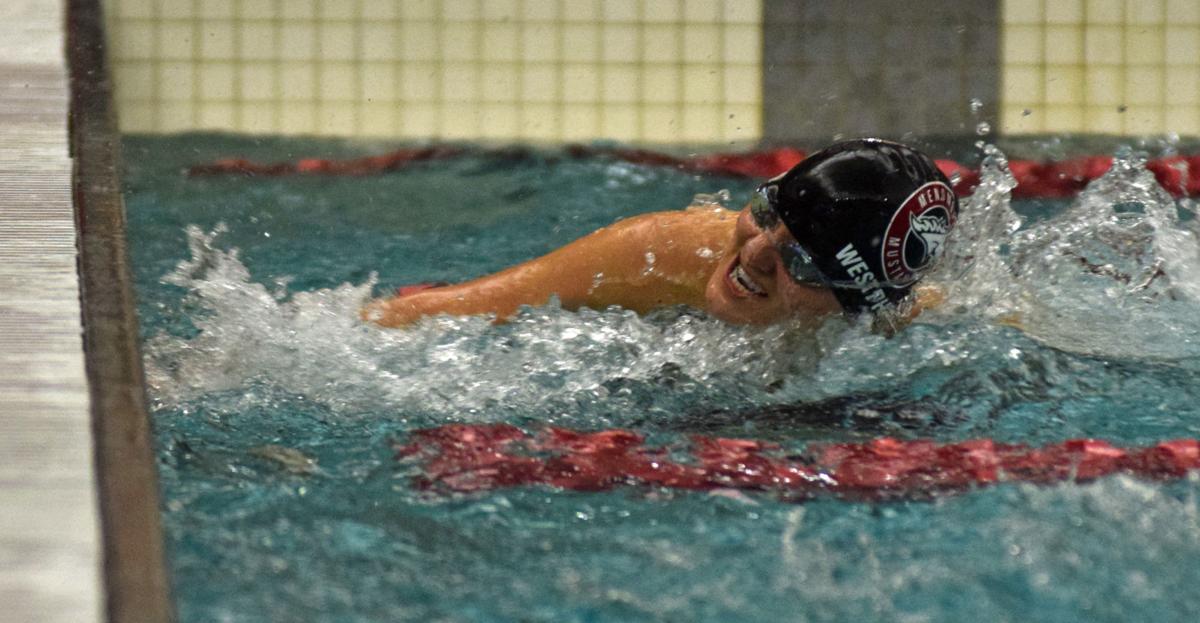 Menomonie senior Kate Westphal fires off the wall, into the second 25 yards of her butterfly leg in the 200 medley relay in Friday's WIAA Division 2 state girls swimming and diving championships at the Waukesha South Natatorium. 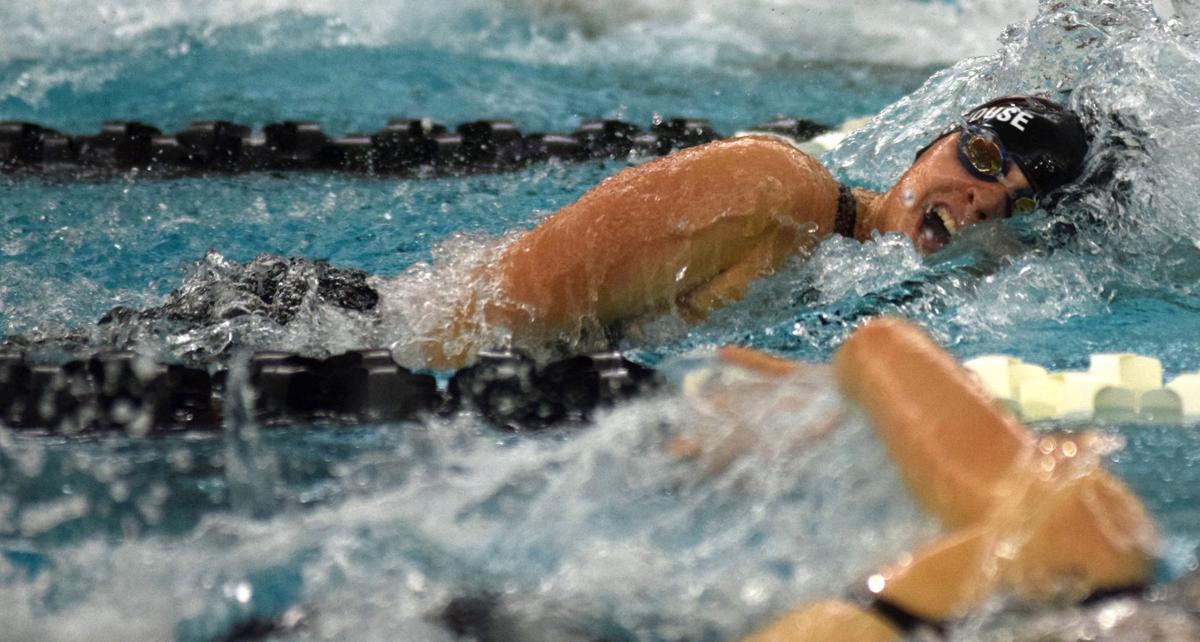 Menomonie junior Kinsey Singerhouse takes a breath during her leg of the 200-yard freestyle relay in Friday's WIAA Division 2 state girls swimming and diving championships at the Waukesha South Natatorium. 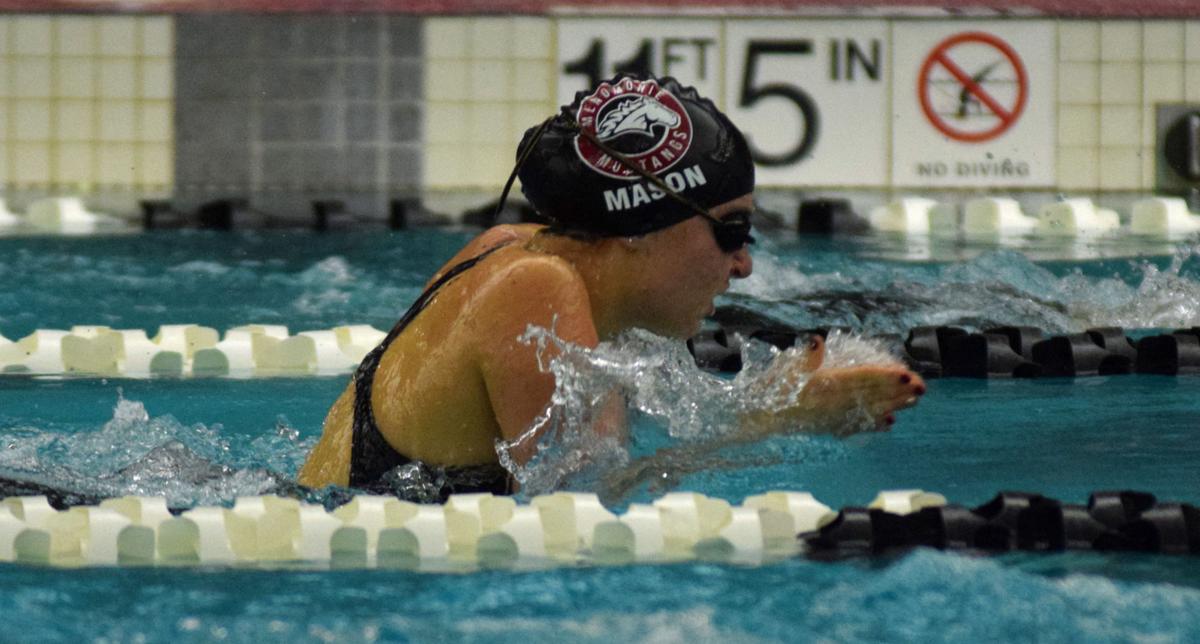 WAUKESHA — Melody Greenwood finished in fifth place in the 50-yard freestyle for the Menomonie girls swimming and diving team on Friday at the Division 2 state championships at Waukesha South Natatorium.

Greenwood finished the race in 24.88, improving on her seed time by nearly three-tenths of a second to earn the podium finish for the Mustangs. Rice Lake’s Faith Forsberg won the event in 24.13, just in front of Marinette/Peshtigo’s Maija Carriveau (24:32) for first.

The senior Greenwood was also eighth in the one-meter diving event, scoring 184.65 points in the preliminaries before ending with a score of 399.9 in the finals. Whitnall swimmers swept the top-two positions as Bella Smith (519.15) won and teammate Kamyla Held (465.95) taking second.

The 200-yard freestyle relay team of senior Kate Westphal, junior Kinsey Singerhouse, junior Shannon Mason and Greenwood finished ninth in their race, timing in at 1:43.54 to pick up four-tenths of a second from their seed time from sectionals. Rhinelander’s Noelle St. Pierre, Abi Winnicki, Karis Francis and Malia Francis won the race in 1:38.03 while the Lakeland Union team of Brie Wescott, Mariah Angove, Naomi Hamerla and Rylee Ahlborn was second in 1:38.79.

The same four Mustang swimmers also teamed up to take 13th place in the 200 medley relay race with a time of 1:56.13, improving on their sectional seed time by more than seven-tenths of a second as the Shorewood team of Elise Jacobs, Eva McNally, Amie Barrow and Amelia Kuennen won the race in 1:47.45.

Menomonie finished 16th in the team scoring with 51 points total. Rhinelander (255) won the championship with Shorewood (228) second and Greendale (202) in third.

Nine Menomonie High School athletes finalized their collegiate futures on Wednesday morning and were recognized for their commitment to continue with athletics in college. Mackenzie Bird, Jonathan Fenton, Jace Gilbertson, Dominik Hendrickson, Kaleb Kazmarek, Ethan Phillips, DeVauntaye Parker, Brigs Richartz and Brock Thornton were recognized for their decision to continue on as student-athletes at the next level.

Menomonie senior Kate Westphal fires off the wall, into the second 25 yards of her butterfly leg in the 200 medley relay in Friday's WIAA Division 2 state girls swimming and diving championships at the Waukesha South Natatorium.

Menomonie junior Kinsey Singerhouse takes a breath during her leg of the 200-yard freestyle relay in Friday's WIAA Division 2 state girls swimming and diving championships at the Waukesha South Natatorium.