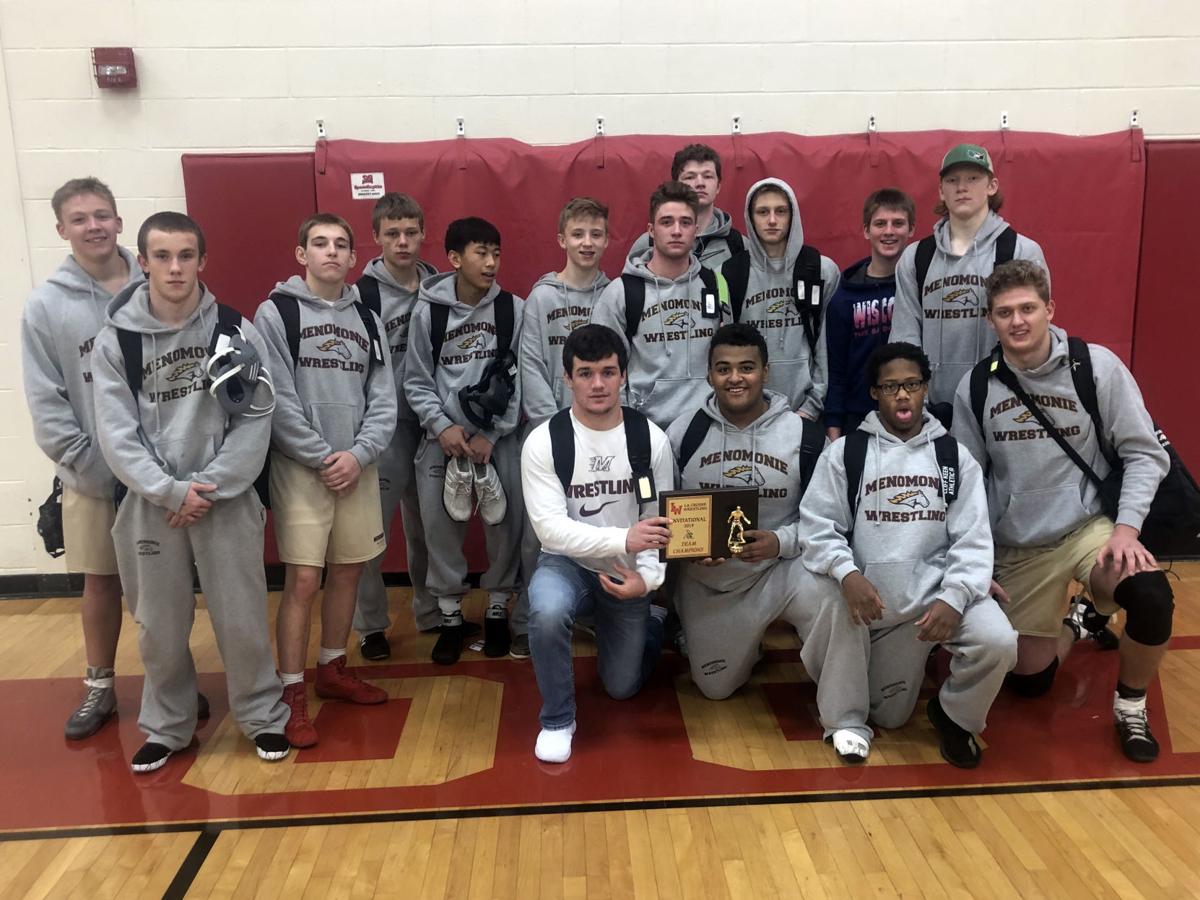 The Menomonie wrestling team won a team championship at the La Crosse Invitational on Saturday. 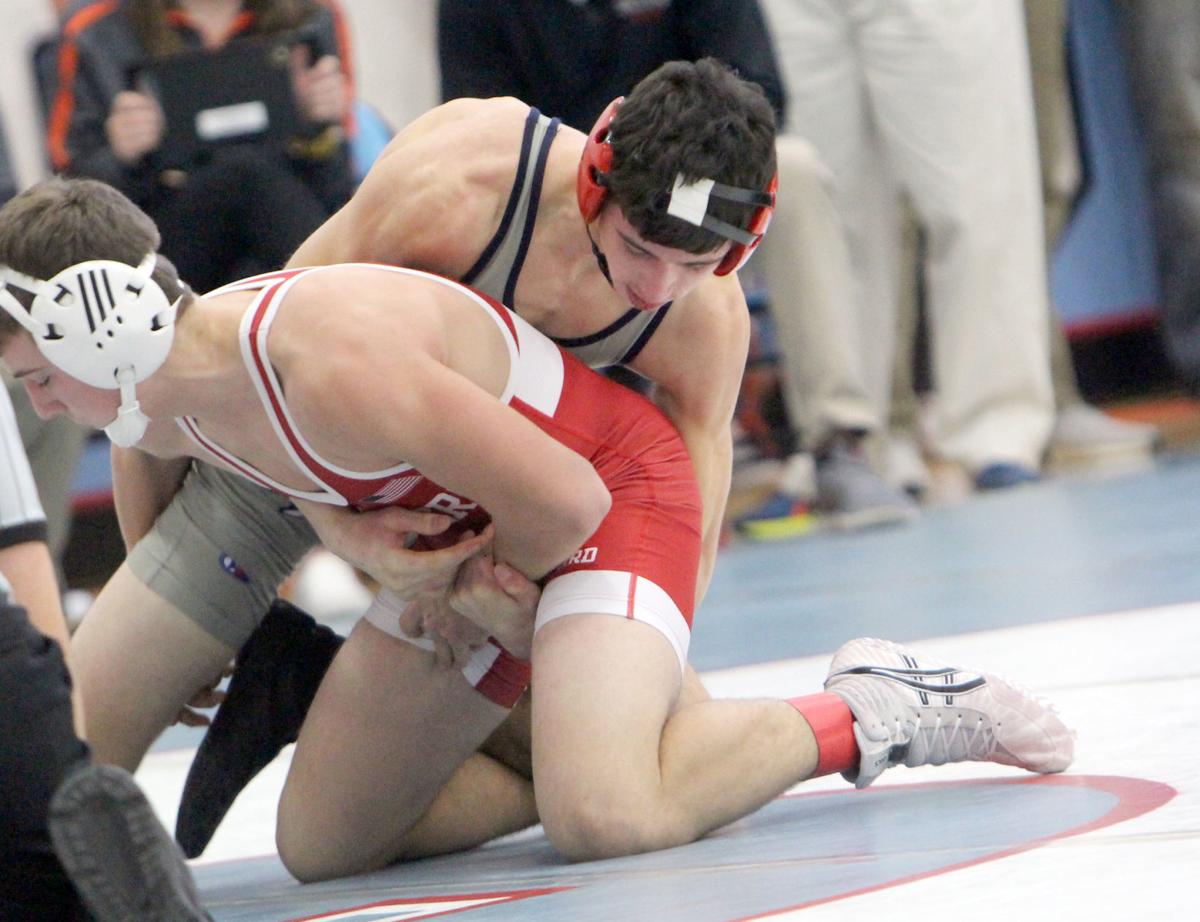 LA CROSSE — The Menomonie wrestling team placed first as a team at the La Crosse Invitational on Saturday.

The Mustangs combined for a team score of 257.5 to edge La Crosse Aquinas (251) at the top of the leaderboard.

Aure got a 17-2 technical fall in round one and a 16-1 tech fall in round two. The freshman then won by fall (one minute, six seconds) to advance to the semifinals where Aure defeated La Crosse Logan/Central's Nolan Niemann by fall (3:09).

Aure won by forfeit over teammate Jacob Holle in the 126-pound first-place match.

Macke got pins in his first two matches before winning a 4-0 decision in the semifinals and 11-7 victory over Saint Croix Central's Jacob Berends in the title match.

Wright dominated competition as he got pins in all five of his matches. Wright defeated De Soto's Cezar Garcia in the championship bout in 1:37. The senior is an honorable mention in the latest Division 1 Wisconsin Wrestling Online rankings at 220.

Finishing second was Evan Harper (120), Holle (126) and Josh Boyette (182). Harper got a pin in the first three rounds before falling by a 9-2 decision to Daylin Haney of La Crosse Logan/Central. Holle came in second after advancing to the championship match following pins in each of his four previous matches. Boyette won by fall, then earned a 10-2 major decision before collecting two more pins to advance to the title match. He then lost to Braeden Bloom of Saint Croix Central by a 14-5 major decision.

Menomonie is back on the mat on Thursday when the Mustangs host Rice Lake.

Best beat Prescott's Sam Murphy by a pinfall in exactly one minute to take the championship. Best advanced to the Division 2 state tournament last season at 132 and checked in at fifth in the latest Division 2 rankings at that weight.

Luke Blanchard came home with a second-place finish for Bloomer/Colfax at 113 pounds, using three pinfall wins and a tight 7-6 decision victory over Baldwin-Woodville's Tyler Fink to advance to the championship match where Spencer/Columbus' Ashton Ackman scored a major decision win. The sophomore Blanchard was 12th in the latest state poll at 113.

Bowen Rothbauer added another strong finish for Bloomer/Colfax when he finished in third place at 152. Rothbauer used pinfall wins to advance to the semifinals before Arrowhead's Noah Mulvaney scored a 5-0 decision win. Rothbauer bounced back to earn a 7-0 decision victory over Medford's Emett Grunwald to cap a successful performance for the grappler ranked 11th in the latest 160 poll. The Raptors were 12th in team scoring with 158 points.

At Wisconsin Dells, the Bulldogs earned three dual victories at the Devil Duals hosted by Adams-Friendship.

The Bulldogs lost 48-28 to Whitnall/Greendale in the first place match of the consolation bracket.

The Bulldogs had five wrestlers ranked in the latest Division 3 ranking with Joles first at 195, Berg fifth at 120, Ira Bialzik ranked ninth at 138, Stuart 11th at 145 and Dormanen an honorable mention at 152.

Boyceville will compete at the Osceola Duals next Saturday.

At Menomonie, the Mustangs dropped a close Big Rivers Conference contest to the Wildcats.

Davis Barthen had a team-high 21 points for the Mustangs (1-3, 1-2). Ethan Wurtzel added 13 while Brock Thornton had eight and Noah Feddersen six.

The Wildcats had a 29-23 advantage at halftime.

At River Falls, the Mustangs had a first half lead slip away in a conference loss to the Wildcats.

At Elk Mound, the Mounders had no trouble dispelling of the Wolves in a Dunn-St. Croix Conference contest.

Elk Mound is back on the court Thursday at Glenwood City.

At Colfax, Kameri Meredith scored a game-high 26 points to lead the Vikings in a rout of Glenwood City.

Colfax (5-1, 3-0) plays at Hayward on Monday before hosting Mondovi on Thursday.

At Boyceville, the Buffaloes pulled away from the Bulldogs in a conference matchup.

Boyceville plays at Durand on Thursday.

At Chippewa Falls, the Sabers fell in a nonconference matchup.

Joey Schemenauer scored to start the game for the Sabers (2-3) before Western Wisconsin (3-2-1) scored the final five goals of the game.

Local News. Wherever you are. JOIN TODAY for 90% off.