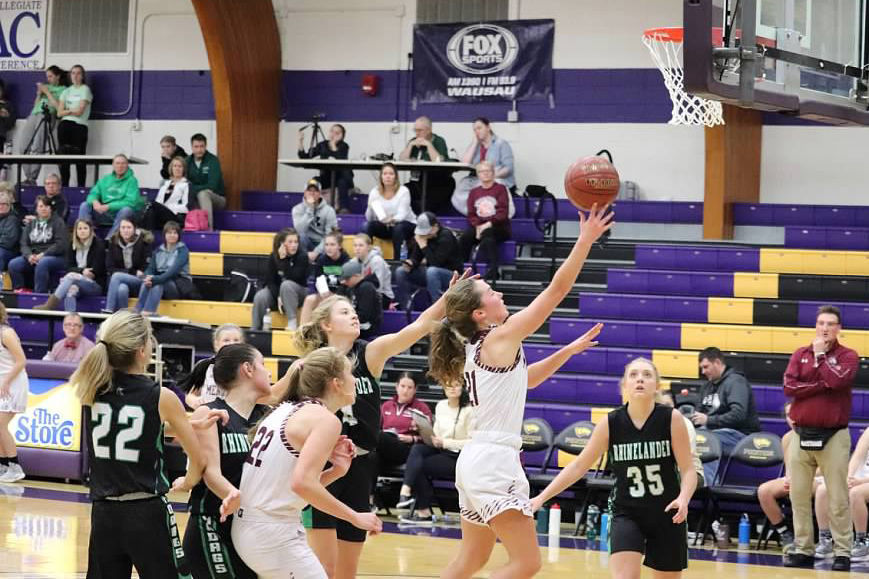 Menomonie's Shelby Thornton (21) get a layup against Rhinelander in the Tom Kinslow Memorial Tournament at UW-Stevens Point on Friday. 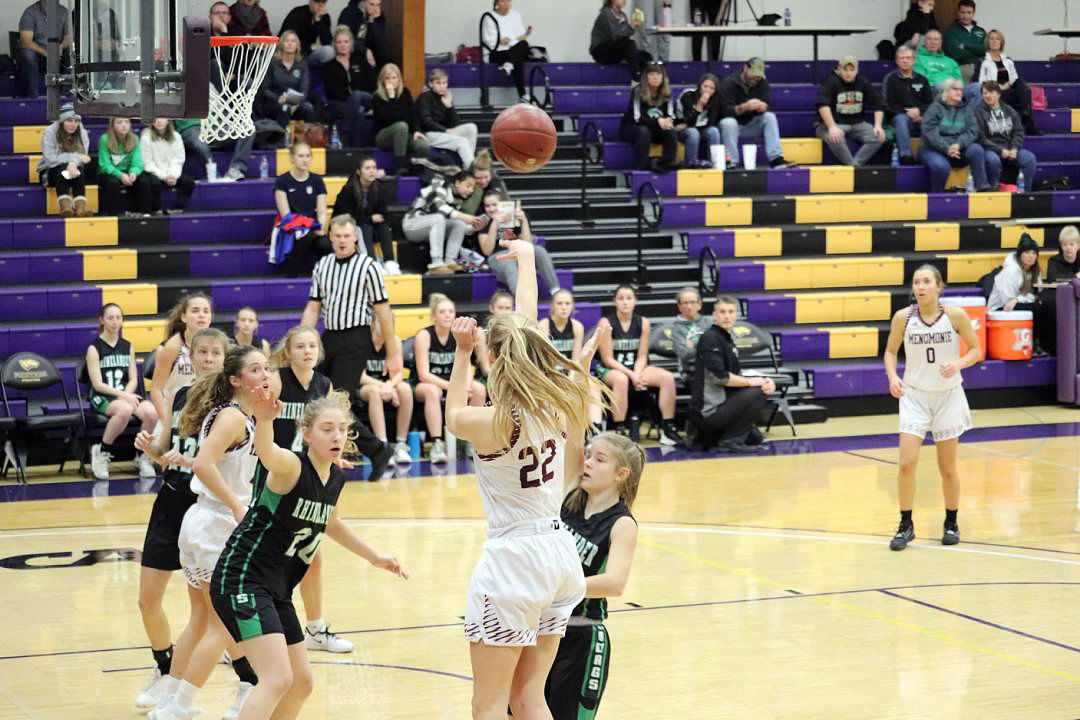 Menomonie's Emma Mommsen (22) takes a jump shot against Rhinelander in the Tom Kinslow Memorial Tournament at UW-Stevens Point on Friday.

STEVENS POINT — Shut down defense in the second half carried the Menomonie girls basketball team to a 45-38 victory over Rhinelander on Friday at the Tom Kislow Memorial Tournament hosted at UW-Stevens Point.

“Overall really proud of our effort and energy,” Menomonie coach Storm Harmon said. “We have to keep working on being efficient and effective with the ball. That lies on us coaches and we will get them there. The tournament was a great experience for us.”

Menomonie trailed 24-19 at the break but the Mustangs held the Hodags to just 14 points after halftime. Menomonie trailed for much of the second half but it overtook the lead with slightly less than four minutes remaining in the game.

Kennedy Van Zile had 20 points for Rhinelander (1-2). She averaged almost 27 points a game last season and Harmon said the team’s effort on her defensively was key.

“Our team did a tremendous job making her see contest shots the whole second half. Our primary defender on her was Bella Jacobsen and she was lights out on being there on the catch,” Harmon said of defending Van Zile.

At Stevens Point, the Mustangs fell in their second game of the Tom Kinslow Memorial Tournament at UW-Stevens Point on Saturday.

“This was another really good program out of the Wisconsin Valley (Conference )that challenged us in a way we don’t normally see in the nonconference schedule,” Harmon said. “They were very physical and much bigger than us, but our girls battled.”

Menomonie (2-2) held a 17-15 advantage at the break but the Evergreens outscored the Mustangs by 13 after halftime.

“I can’t complain about the girls efforts. They brought it for as long as they could,” Harmon said. “I really think the quick turn around and playing on the college courts two games in a row played a role in how our legs felt. We looked gassed in the second half.”

When Tyler Werner crossed the finish line it was like a weight had been lifted off his shoulders.

Menomonie's Shelby Thornton (21) get a layup against Rhinelander in the Tom Kinslow Memorial Tournament at UW-Stevens Point on Friday.

Menomonie's Emma Mommsen (22) takes a jump shot against Rhinelander in the Tom Kinslow Memorial Tournament at UW-Stevens Point on Friday.