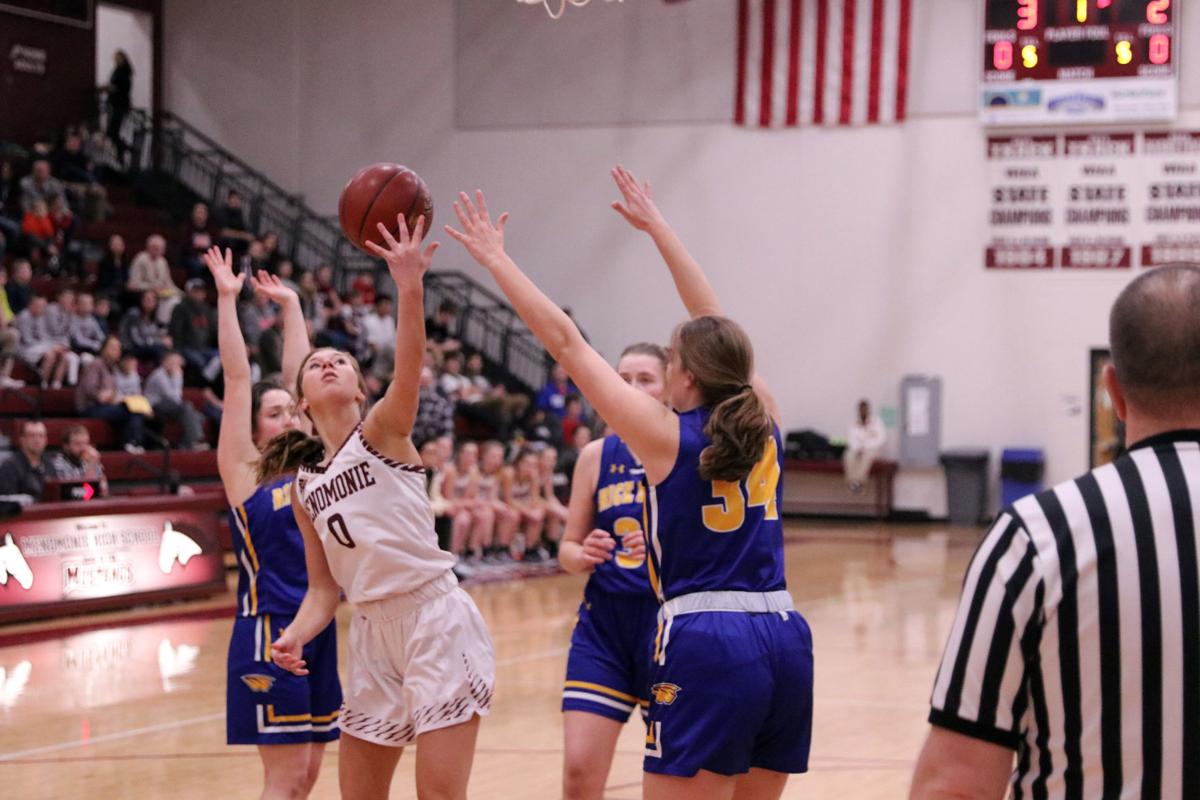 Menomonie's Olivia Steinmetz (0) fights for a loose ball against Rice Lake on Friday in Menomonie. 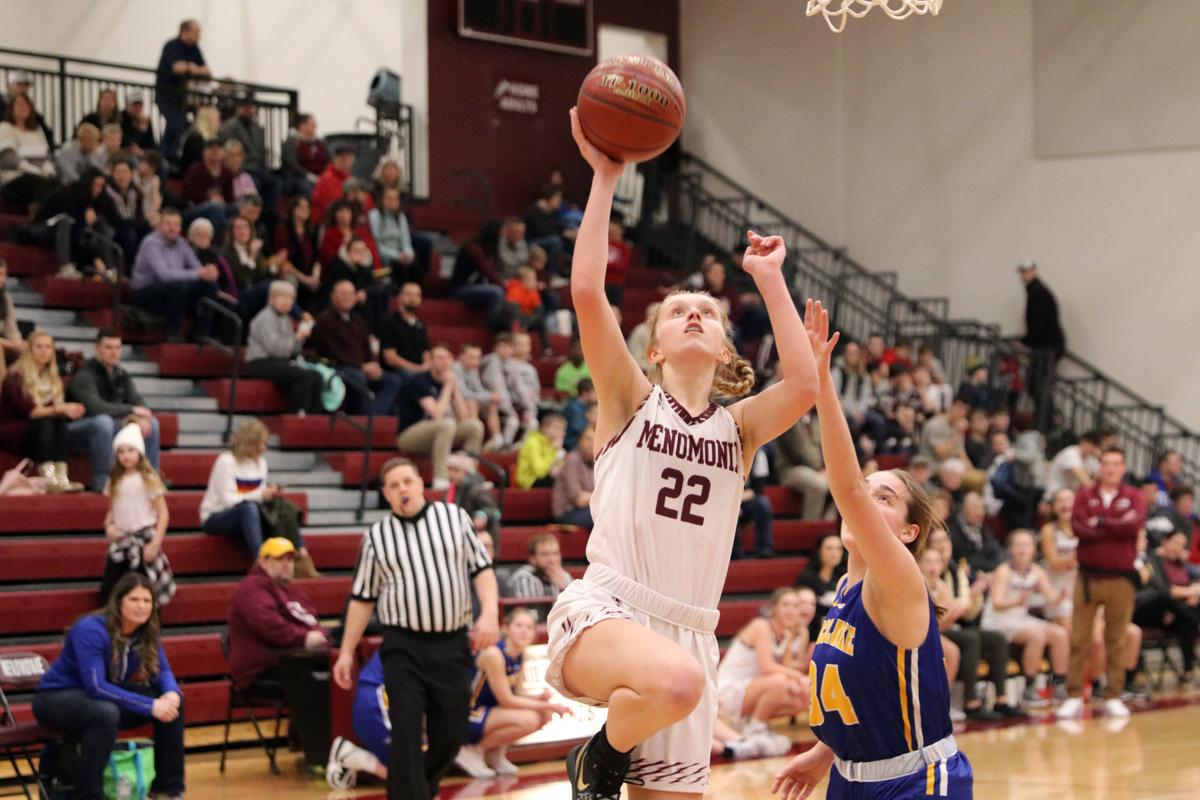 Menomonie's Emma Mommsen (22) gives the Mustangs an early 9-2 lead over Rice Lake in Menomonie on Friday. 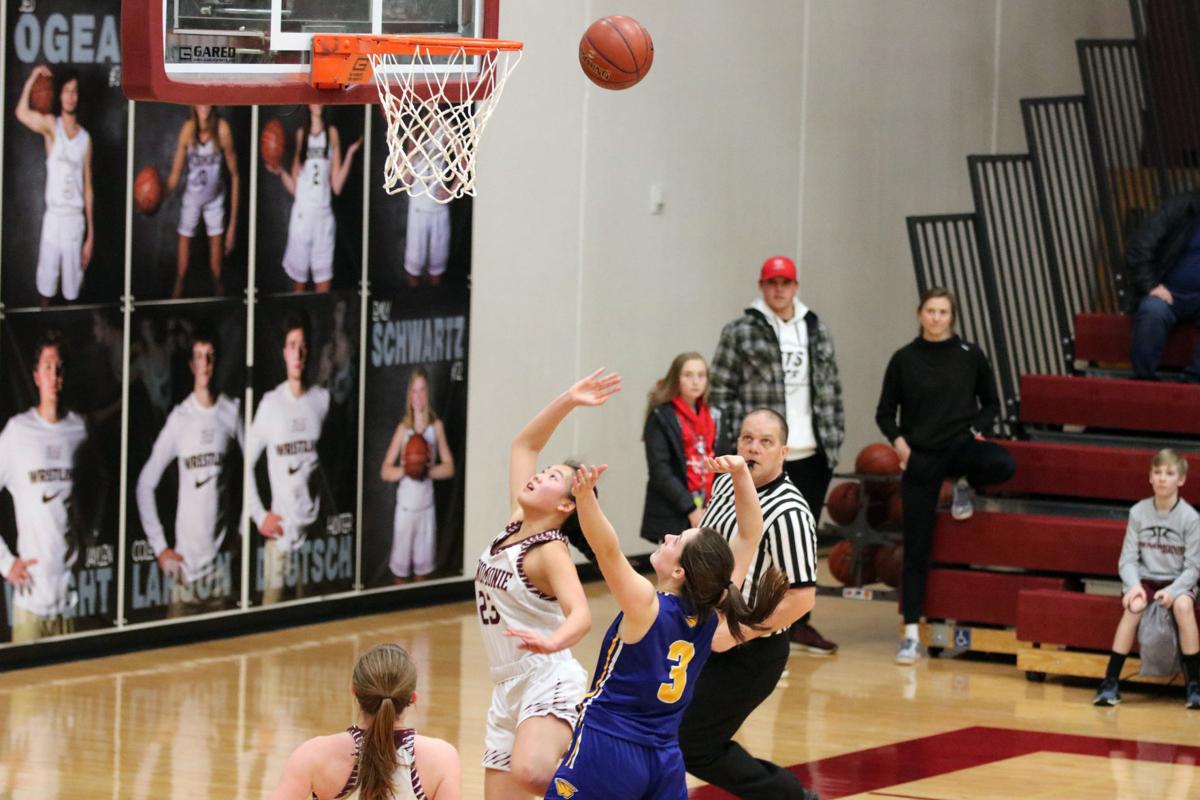 Menomonie's Helen Chen (23) puts up a shot in the second half of the Mustangs win over Rice Lake in Menomonie on Friday. 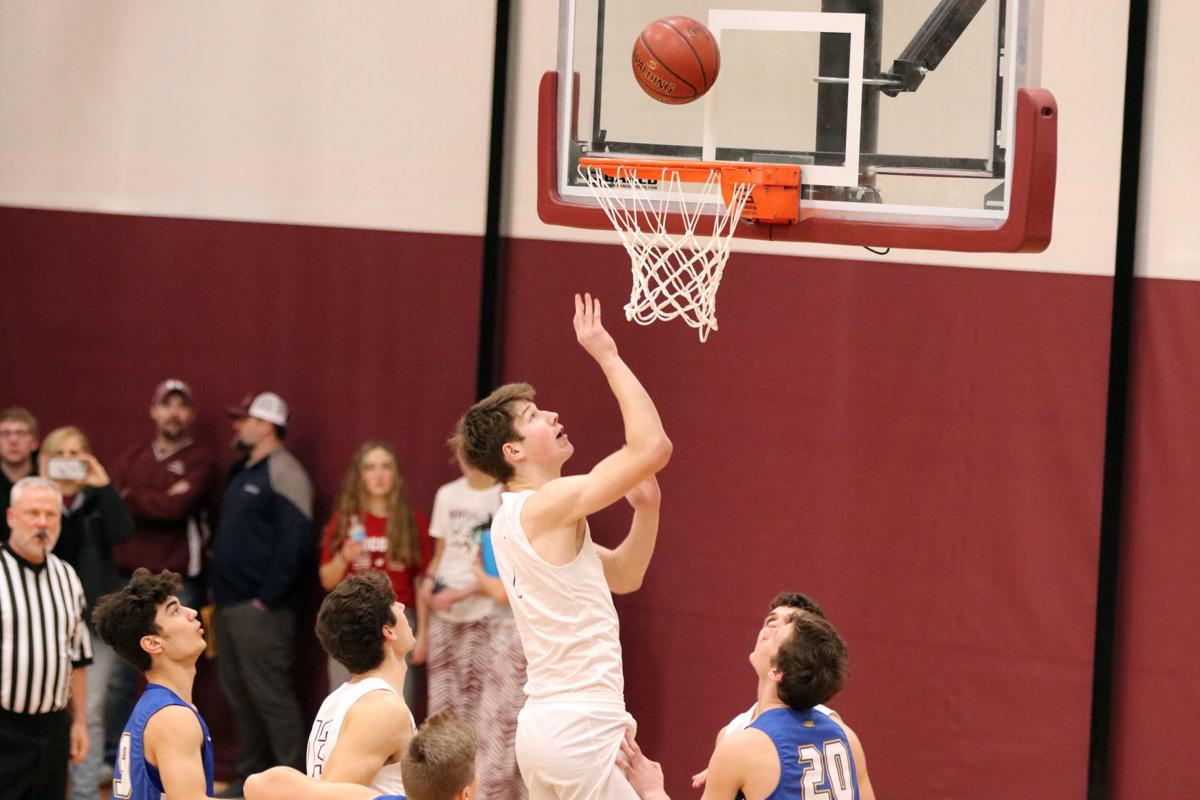 Menomonie's Noah Feddersen (1) scores for the Mustangs in a win over Rice Lake on Friday in Menomonie.

Skillings got pins in both the quarterfinal and semifinal rounds before being defeated by St. Michael-Albertville's Wyatt Lidberg by a 6-4 decision in the 182-pound championship match.

Aure got a pin in just 36 seconds in his first round matchup. He then won a 2-0 decision in the quarterfinals but lost to Anoka's Brendan Howes in the semifinal. Aure bounced back to defeat Monticello's Nelson Anderson by a 13-2 major decision.

Fenton earned a technical fall (15-0) in his first matchup and then pinned St. Thomas Academy's Leo Bluhm in 1:34 in the quarterfinals before dropping a 8-4 decision in the semifinals. Fenton suffered an injury in the third place match to take fourth.

At St. Croix Falls, Boyceville's Trett Joles won a championship at 182 pounds at a tournament hosted by the Saints.

Joles rolled through the competition getting two pins and a technical fall on his way to the title. In the championship, he pinned Hudson's Hank Gierke in 4:30.

Josiah Berg and Nate Stuart each took third place for the Bulldogs. Berg won by technical fall (17-2) in the quarterfinals, but lost to Spencer's Treyton Ackman in the semifinals. Berg then won a 6-3 decision over St. Croix Falls' Mason Will in the third place match at 120 pounds.

In the 132-pound weight class, Stuart pinned his opponent in his first matchup and then earned a 2-1 decision victory over Northwestern's Braden Trautt. Stuart lost in the semifinals but bounced back to defeat River Falls' Owen Larson 5-2.

Tyler Dormanen placed fourth at 145. He got a pin in the first round and then won a 8-0 major decision over River Falls' Miles Longsdorf in the quarterfinal. Dormanen would drop matches to St. Croix Falls' Kole Marko and Amery's Walker Ingham in the semifinal and third place matches.

The Bulldogs placed eighth as a team with a score of 93. St. Croix Falls won the event at 197.

Boyceville hosts a dual against Durand on Thursday.

Menomonie took fifth overall at the event with a team score of 123 as host Eau Claire Memorial/North won the event at 440.

Bilse placed eighth in the 200 individual medley and Mezquita Lobato took 10th in the 100 freestyle.

Menomonie returns to the pool on Thursday at River Falls.

At Menomonie, the Mustangs came back from a halftime deficit in a Big Rivers victory over the Warriors.

Shelby Thornton and Emma Mommsen each had 12 points to lead the Menomonie and Helen Chen added 11.

At Menomonie, the Mustangs won their third game in a row with a Big Rivers Conference victory over the Warriors.

The Mustangs played at New Richmond on Monday evening and they return to the court Friday at Eau Claire Memorial.

At Boyceville, the Mounders defeated the Bulldogs in a Dunn-St. Croix battle.

Elk Mound (6-6, 5-2) played Monday night at Fall Creek and will return to action by hosting Colfax on Thursday. Boyceville (1-10, 1-6) had a nonconference matchup with Prairie Farm on Monday and will play at Elmwood/Plum City on Thursday.

At Spring Valley, the Vikings knocked off the Cardinals in a Dunn-St. Croix Conference contest.

Colfax trailed by four at the break but the Vikings outscored Spring Valley 35-20 after halftime.

Hydukovich also had a team-high seven rebounds and three assists. Gibson pulled down five boards and dished out four assists.

Colfax played at Ellsworth on Monday night and the Vikings return to the court on Thursday at Elk Mound.

Menomonie's Olivia Steinmetz (0) fights for a loose ball against Rice Lake on Friday in Menomonie.

Menomonie's Emma Mommsen (22) gives the Mustangs an early 9-2 lead over Rice Lake in Menomonie on Friday.

Menomonie's Helen Chen (23) puts up a shot in the second half of the Mustangs win over Rice Lake in Menomonie on Friday.

Menomonie's Noah Feddersen (1) scores for the Mustangs in a win over Rice Lake on Friday in Menomonie. 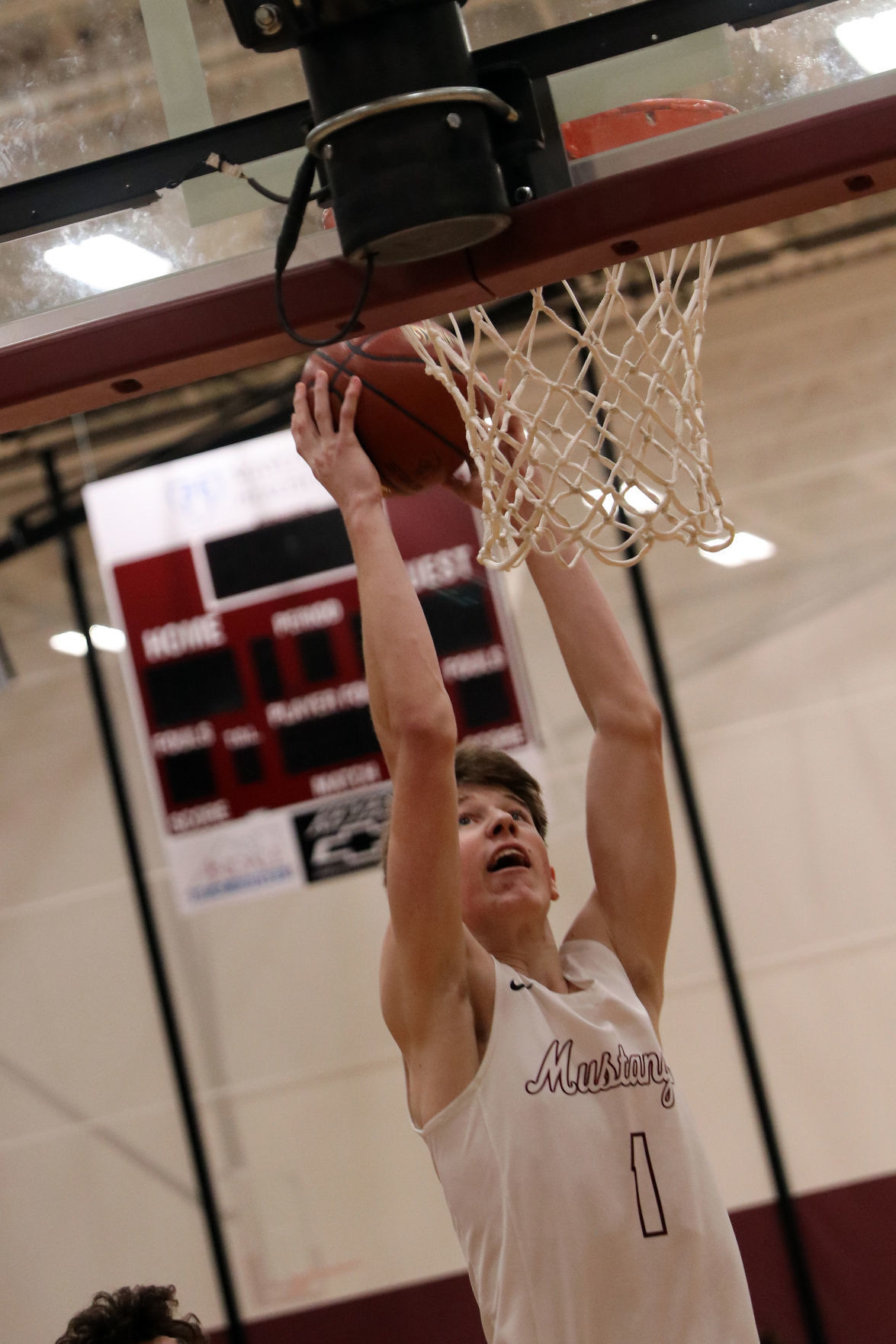 Menomonie's Noah Feddersen (1) goes up for a dunk in Friday's game against Rice Lake in Menomonie.