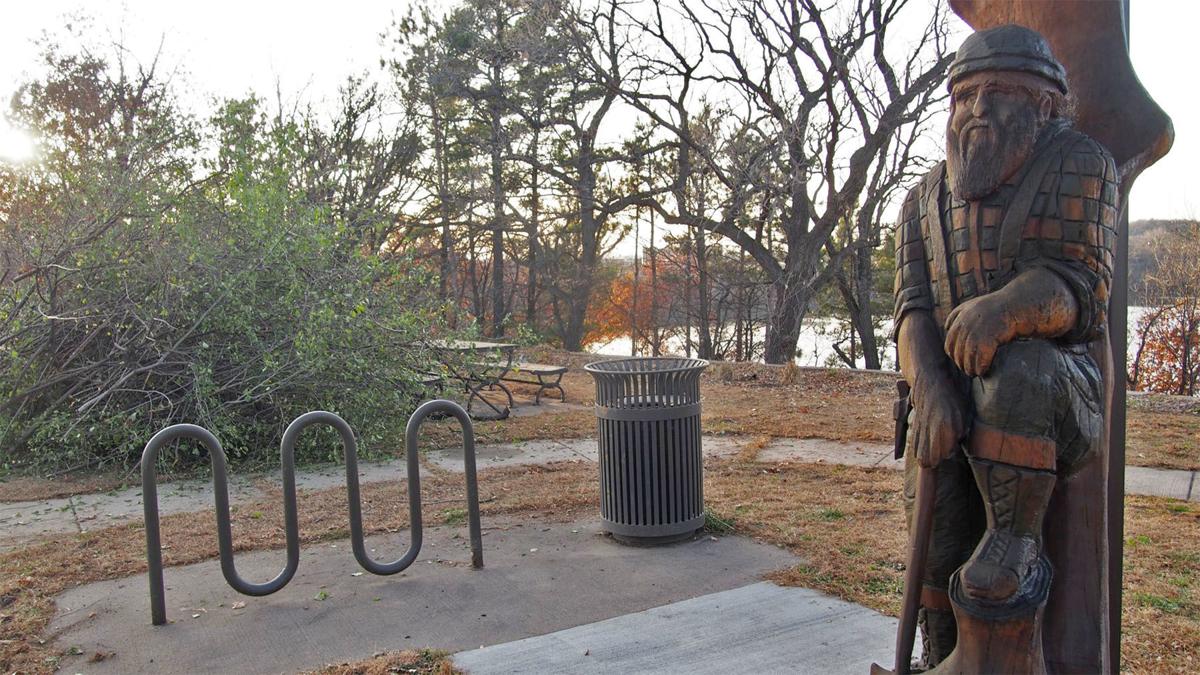 Brush waiting to be hauled away near the lumberjack statue. 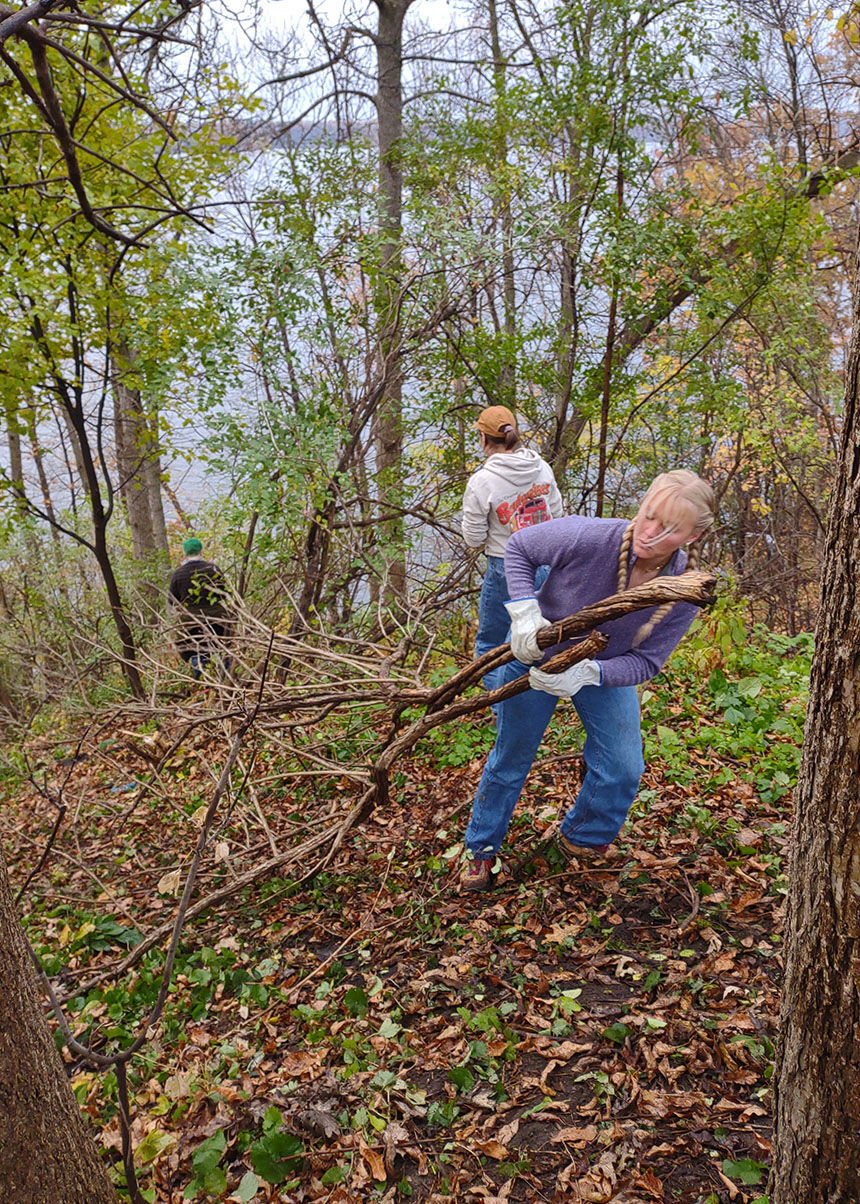 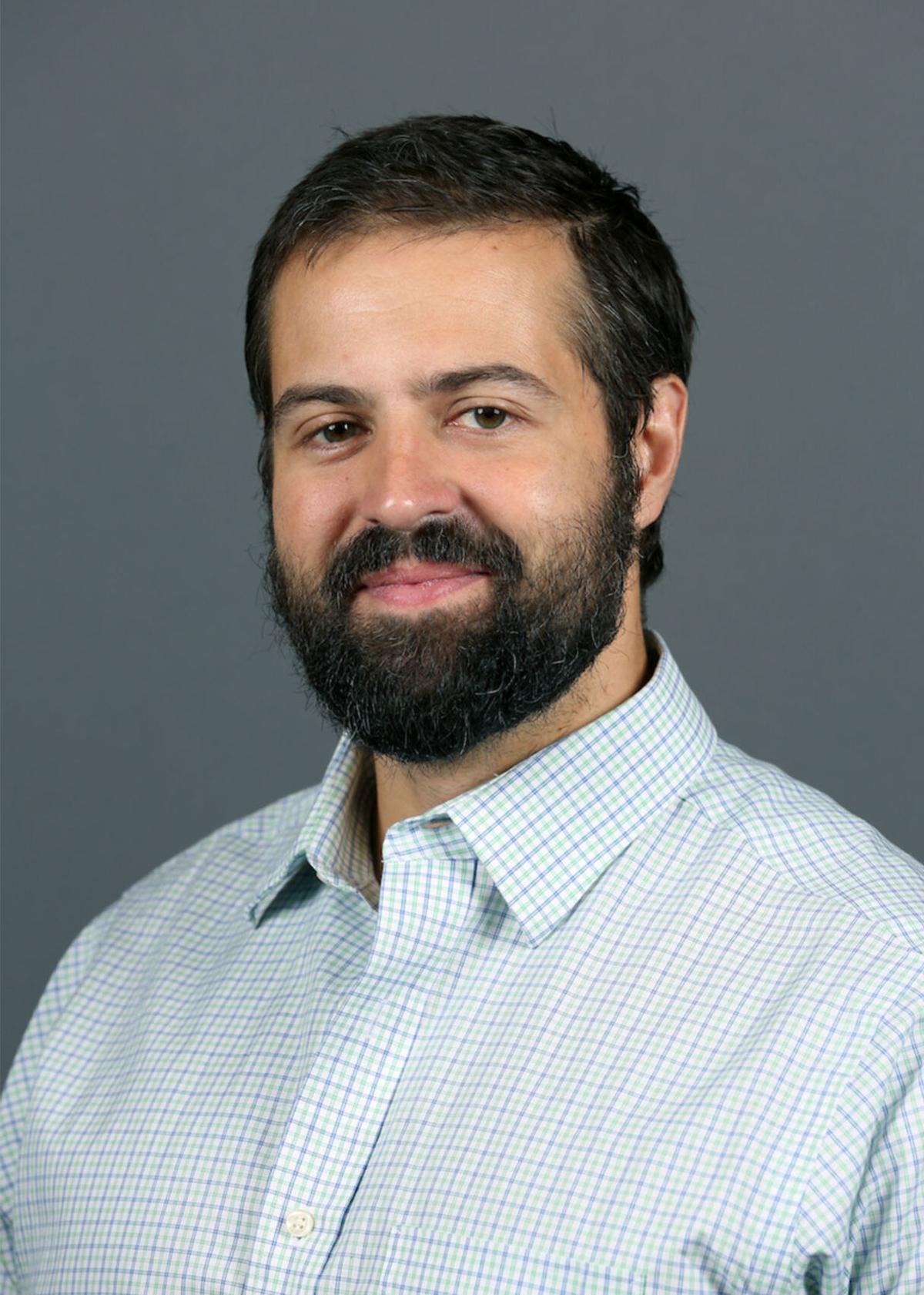 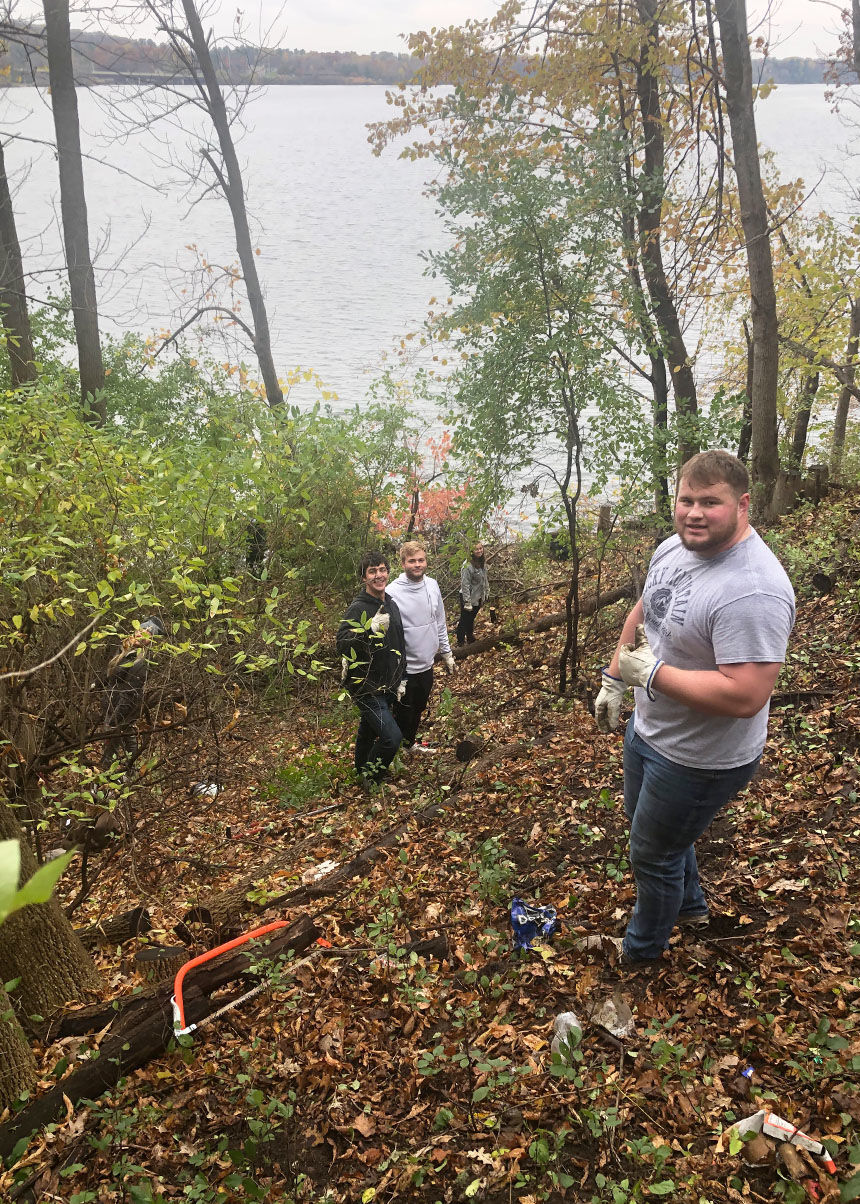 A student hauls brush up the steep lakeshore bank.

Menomonie residents driving along Crescent Street on the southern shore of Lake Menomin may notice their view of the lake is a little clearer recently.

That’s all thanks to 120 University of Wisconsin-Stout students who participated in a service-learning project to remove invasive plant species from the lakeshore, west of the lumberjack statue.

Over the course of a week, students in the Plant Biology course and the Science, the Environment and Sustainability course spent 12 hours primarily targeting two species of invasive Eurasian shrubs – common buckthorn and Tartarian honeysuckle.

Keith Gilland, interim program director of environmental science, explained the two main benefits of removing invasive species, besides the aesthetic benefits of opening up the view from Crescent to the lake, are:

The downtown site is just a few blocks from campus.

“The project benefits students by introducing them to parts of the Menomonie community they might otherwise not see,” Gilland said. “It reinforces lessons learned in class about the benefits of biodiversity and the drivers of biodiversity loss.

“It also shows the students the power of individual and collective action to make a large impact on the world around them.”

A community partnershipThe invasive species removal project is in partnership with the City of Menomonie street and parks department and the Lower Chippewa Invasives Partnership, a nonprofit which serves to bring awareness to and manage the spread of invasive species in Chippewa, Dunn, Eau Claire, Pepin and Pierce counties.

Every fall since then, Gilland’s Plant Biology classes have worked with the city to select a parcel of city-owned land with a need for invasive species removal.

The Sustainability course this year is taught by professors Nicole Hayes and Steve Nold. It has also been led by Julie Beston, Julia Chapman and Scott Hayes, whose classes have joined in the projects.

They began at Lakeside Park, then moved on to Riverside Park by the Red Cedar Trail and Miller Park. Last fall, Gilland decided that the wall of buckthorn at the top of the bank leading down to Lake Menomin off Crescent Street needed clearing.

“The view was restored and many dump truck loads were removed,” Gaetzke said. “The video we posted of the project yielded some of the most views we have ever had.”

This year, the classes worked further down the steep bank to remove the invasive brush near the water’s edge.

Students cut the brush off within 4 inches of the ground and treated the stumps with an herbicide to prevent regrowth.

The city hauled the brush away to a burn location at the city dump.

During the project, students learned how to identify common Wisconsin plants and describe how plant communities contribute to ecosystem processes. They also learned the interdisciplinary nature of major global environmental challenges and how to connect citizen science and community service to develop sustainable solutions.

“This has been a fantastic cooperation over the years, and everyone is always so game to participate that it really makes for some incredible progress,” Gilland said. “The city has been a great supporter, and our students seem to really have a good time getting outside and getting dirty.”

Kal Breeden, a first-year environmental science student, thought the location of the project on the hillside was the biggest challenge. “Everyone had to be slow and steady to be safe,” they said. “And some of the larger buckthorn took a long time to saw by hand and then had to be dragged out of the water after falling in that direction.”

Breeden, of Lakeville, Minn., has a concentration in natural resource conservation and is considering a minor in plant science or sustainability. They are passionate about the environment, and the woodlands and pastures they grew up near are their favorite places in the world.

“I have seen these places become more and more overtaken by invasive species, and that inspires me to protect these areas and their native species,” Breeden said. “Projects like this show me the difference that one person can make in an area, and I look forward to making a difference in other places as well.”

Gaetzke said the projects have cleaned up many of Menomonie’s beloved parks. “We together are increasing the biodiversity in our community, which has been a joy to watch. We are excited to continue working with our partners every year to continue to make Menomonie a better and more diverse city.”

Breeden hopes the project can be advertised in the future to encourage community members to join in the student service-learning experience, where students could educate the community about common invasive plants.

Nold also believes the project gives the students hope. “Many are upset about the direction we are heading environmentally, and they don’t feel empowered to effect lasting change,” he said. “Removing invasive species is a task that takes many hands. Once our students work together to help solve a problem, they realize that many small actions add up and can have an enormous impact. They leave satisfied and ready to tackle bigger problems.”

Biology classes are involved in other projects through their classes, including monitoring water quality in local streams; and mapping an inventory of invasive plants on campus to develop removal and replacement plans. Biology is a concentration within the applied science major at UW-Stout. There is also a biology minor.

Breeden is involved with UW-Stout’s Natural Areas Club. They’ve helped clear buckthorn from Galloway Creek, made firebreaks to burn and restore the prairie at Dobb’s Landing and cleared brush to create a recreation area at the Colfax Red Cedar Preserve.

Breeden isn’t sure yet where their degree will lead them, but they do feel the project is helping prepare them for their career. “I think community volunteering is especially valuable as a way to gain experience in new things and make connections with people,” they said.

“I would recommend being involved in this project or similar ones to anyone, even if you are not a STEM major. Being involved shows motivation and that you care about your community. And you really do make a difference, which is something to be proud of.”

Optimists recognize Dunn County Youth of the Month for October

The Colfax girls basketball team answered a run by Bloomer with an even bigger run of its own in a 57-41 nonconference victory on Monday evening.

The word landholder and its derivative “to hold the land” would seem to have the same meaning, but to artist Witt Siasoco they conjure somethi…

On the bottom of Wisconsin’s Great Lakes lie the wrecks of over 700 ships. Each one tells a story about the state’s maritime history, the mari…

Brush waiting to be hauled away near the lumberjack statue.

A student hauls brush up the steep lakeshore bank.