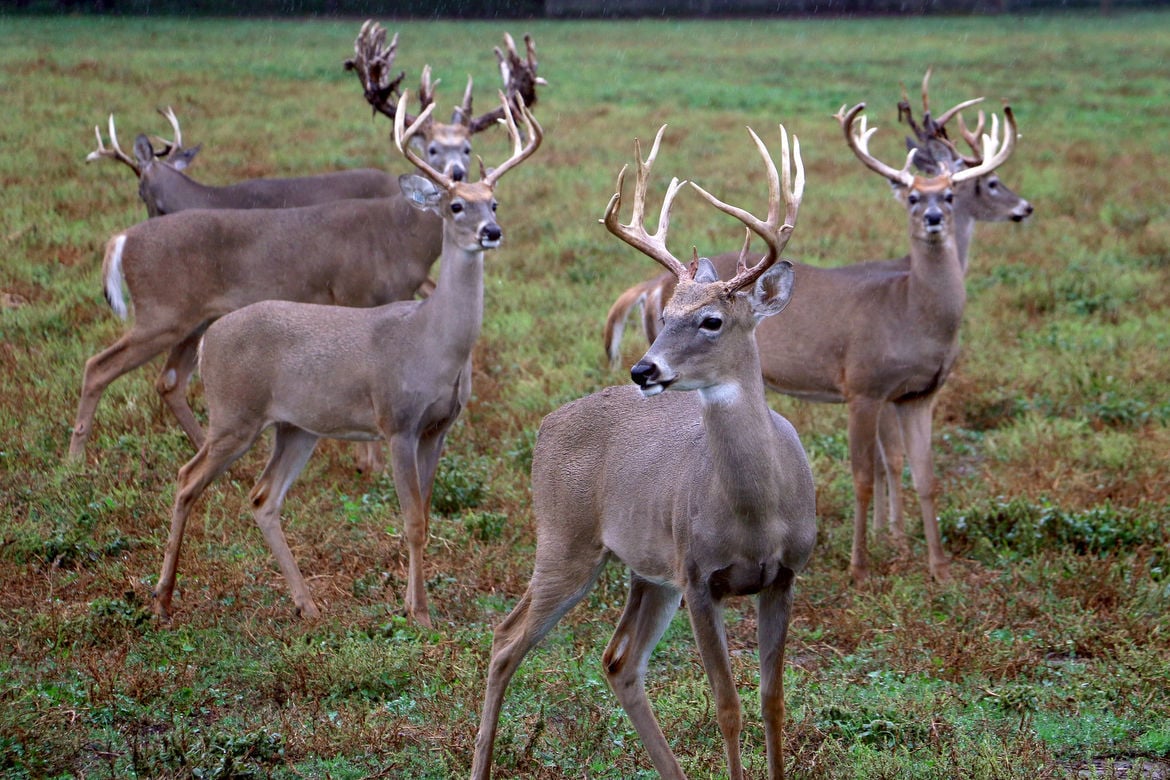 Bucks are seen in September in one of the pens at the Wilderness Whitetails breeding farm in Rosholt, Wis. Fatal chronic wasting disease has spread among Wisconsin’s wild and captive deer populations since 2002. 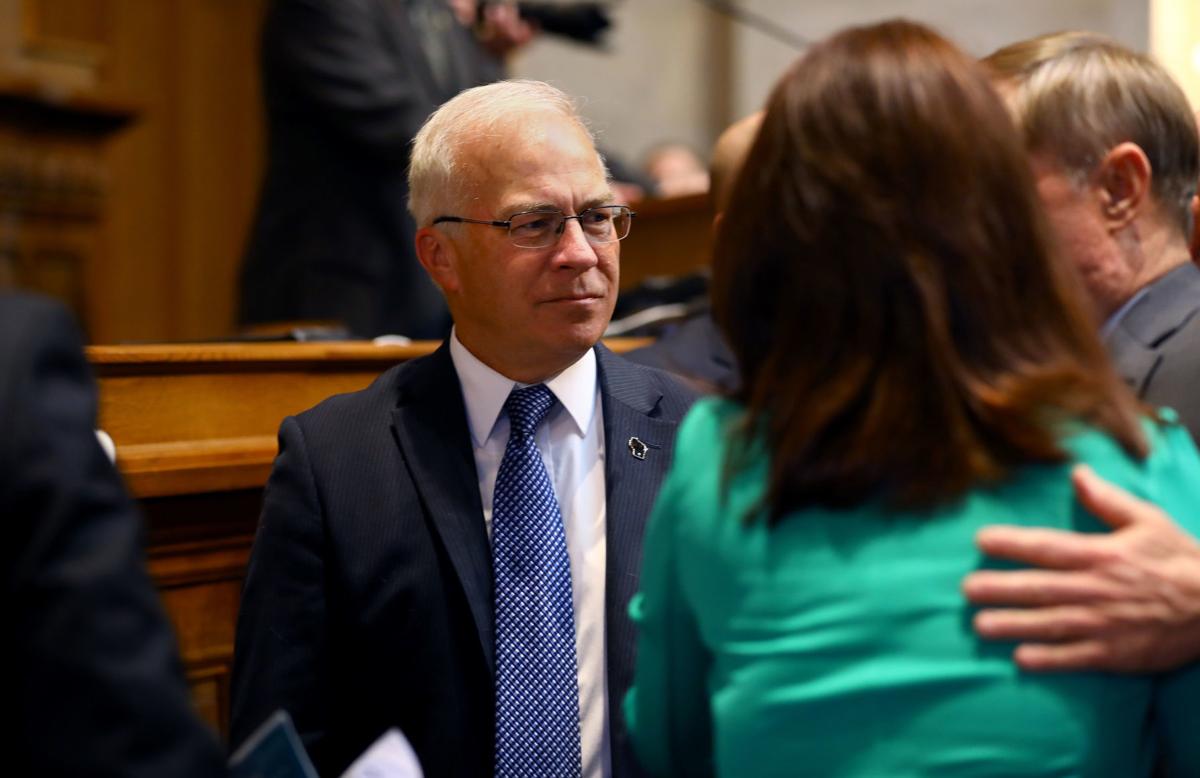 Rapidly growing numbers of cases of chronic wasting disease are appearing on deer and elk farms and hunting ranches in Wisconsin at the same time the state has pulled back on rules and procedures designed to limit the spread of the fatal brain disease among captive and wild deer.

Since 2013, when the Department of Agriculture, Trade and Consumer Protection began to let some captive deer facilities with infected animals continue operating, additional cases of CWD have developed within those facilities, according to interviews and documents obtained under the state’s Open Records Law.

Meanwhile, enhanced fencing requirements are under consideration for captive white-tailed deer and other cervids including elk — but those proposals face heavy opposition from facility owners who say such a requirement is not guaranteed to halt CWD spread and could put them out of business.

Wisconsin now has more CWD-positive deer farms in operation than any other state in the nation, said Richards, who works for the U.S. Geological Survey at the National Wildlife Health Center in Madison.

There are nine CWD-positive deer facilities still in business — seven of which have seen additional cases of CWD on their properties, according to DATCP records

“The existence of CWD in these facilities constitutes a clear, persistent and likely escalating risk to the integrity of the wild deer on the other side of the fence,” Richards said.

But a top DATCP official said the goal of the approach is to keep CWD contained and away from the wild deer population. Until 2013, herds at CWD-positive facilities in Wisconsin were killed and the sites were disinfected.

The new approach “is meant to mitigate risk of moving the disease … outside of the fence,” said Amy Horn-Delzer, veterinary program manager.

Horn-Delzer added that it is up to facility owners to manage the spread of the disease within their own properties.

The federal Centers for Disease Control and Prevention says it is unclear whether this always fatal disease can be passed to humans, although research has shown eating meat from CWD-positive deer can infect macaque monkeys. Signs of the disease, which affects deer and elk, include weight loss, stumbling, drooling and aggression.

There are 380 registered commercial deer and elk operations in Wisconsin spread across nearly every county in the state. Some of them have been in operation since the 1970s and are generally broken down into two categories: breeding farms and hunting ranches.

Breeding farms raise deer to sell to slaughter and to ranches that sell hunting experiences at fenced-in properties. They also sell deer to other breeding farms looking to introduce new genetic lines into their herds. The industry has long been the subject of criticism from some hunters who feel keeping and hunting animals behind a fence gives hunters an unfair advantage over their prey.

There have been 300 CWD-positive tests at 24 deer farms and hunting ranches in Wisconsin, according to state records. Most of those have been found since 2013 — the same year that DATCP, which shares regulation of deer farms with the state Department of Natural Resources, began allowing hunting ranches and breeding farms to continue operating despite having the disease on their premises.

Prior to 2013, all animals on commercial deer operations testing positive for CWD were killed. State law allows authorities to test animals and, if warranted, kill the herd to avoid the spread of disease. Owners can receive up to $3,000 in state and federal funding for each animal that is euthanized.

But there are exceptions to the rule.

Wilderness Game Farm Inc. operates two breeding farms and a hunting ranch in Portage County, and hunting ranches in Marathon and Shawano counties. Since 2013, there have been 84 cases of CWD on the Marathon County hunting ranch called Wilderness North.

Despite having more positive cases than any other captive deer operation in Wisconsin, the ranch continues to sell hunts priced at between $4,000 and $9,000 each, with an option for a “Gold Hunt” — no price listed — that promises deer with antlers measuring 200 inches, including all points.

Emails from Wilderness Game Farm owner Greg Flees, then-DATCP state veterinarian Paul McGraw and program manager Horn-Delzer show mandatory quarantines issued after the 2013 detection allow Flees to move deer from his breeding farms, which had no CWD detections, to his hunting ranches. One of them, Comet Creek in Shawano County, has had six deer test positive for CWD since 2017.

Flees is a second-generation deer farmer. He said his family has been breeding whitetails since the 1970s. Since then, Flees has become one of the best known names in the deer farming industry both in Wisconsin and nationwide. Flees said when test results came back positive from his Marathon County hunting ranch, he did not believe it.

“OK, we fenced in that property and we moved a bunch of these deer, we never took a deer from anywhere else other than this farm that’s never had a positive,” Flees said. “We put them onto that property, and once they were on that landscape, for awhile all of a sudden we started getting some positives.”

Flees said it is possible that CWD was already on the property or that it was brought in by scavengers, birds or feed products such as corn or alfalfa. A 2015 study shows that the misfolded protein that causes CWD, known as a prion, can be taken up from the soil into plants and infect deer.

In May, Walker announced a series of actions aimed at slowing the spread of CWD. He called on DATCP to draw up an emergency rule requiring enhanced fencing and banning the movement of live deer from the state’s 55 counties listed as CWD affected, meaning either an infected deer had been detected there or within 10 miles of the county.

The Republican governor also called on the state DNR to create emergency rules that would have banned hunters from transporting deer carcasses out of counties listed as CWD affected to non-affected counties.

“We need to protect Wisconsin’s hunting traditions and long-standing heritage by working together to contain the spread of chronic wasting disease in deer,” Walker said.

Despite that, DATCP’s citizen board, made up of Walker appointees, voted to take no action on the governor’s request for emergency rules. Now, the agency is pursuing the longer, regular rulemaking process to require double or enhanced fencing for elk and other non-whitetail farms and prohibiting farms from transporting live animals out of CWD-affected counties.

The Natural Resources Board, also staffed by Walker appointees, did proceed with an emergency rule to require enhanced fencing, including a second 8-foot tall fence or an electric fence for whitetail deer farms.

In October, the Legislature’s Republican-controlled Joint Committee for Review of Administrative Rules, which reviews agency regulations, voted to keep fencing requirements for deer farms but eliminated the DNR’s emergency rule that would have limited the movement of deer carcasses from CWD affected counties this hunting season.

While it survived the committee, the DNR fencing rule had already been amended by the agency’s citizen board to give the industry until September 2019 comply with the new regulation.

That timing is significant because the emergency rule is set to expire Feb. 27, 2019. When DNR staff were asked whether that means deer farmers could simply wait until the rule expires to avoid enhanced fencing requirements, DNR policy initiatives advisor Scott Loomans said in an email that the agency is working on a permanent rule to avoid that.

Woods and Meadow Hunting Preserve owner Scott Goetzka of Warrens said the cost of complying is too much for him and other deer farmers in the state.

“Because I feel this is politically driven — not science or veterinary science driven — two years from now, if they don’t like it or CWD keeps spreading, they’re going to come up with something else that you have to do,” Goetzka said. “They basically legislate you out of business.”

No matter how it got to his hunting ranches — or the state for that matter — Flees said he and other deer farmers in Wisconsin are looking to genetics to combat chronic wasting disease.

For the past year, Flees said he has been working with a researcher to breed deer with genetic markers that show resistance to CWD. Flees hopes in five years, he could have a resistant herd.

“Let us deer farmers do our work, and if we nail this resistance thing, let’s figure out how the state can maybe do the same thing in their herd.”

Other research suggests it could be quite a while until such answers are available.

“We don’t know how the CWD prion proteins might change over time to influence both the infection and mortality of different genotypes and deer populations,” according to an article co-written in June by Michael Samuel, an emeritus professor of wildlife ecology at the University of Wisconsin-Madison. “There are still many unknowns that make clear predictions about the longer-term evolution of CWD resistance difficult.”

Meanwhile, the spread of CWD across Wisconsin continues. On Nov. 15, another deer hunting ranch tested positive for the disease in Portage County, bringing the total number of facilities that have tested positive since 2002 to 24.

“I think the challenge with CWD is it’s been found both in the wild and on farms,” said Konkle, the acting state veterinarian. “We don’t know which came first and, at this point, I’m not sure it necessarily matters. It’s a challenge for both our agencies that deal with farm-raised deer and wild deer to try to manage.”

This report was collaboratively produced by Wisconsin Public Radio and the Wisconsin Center for Investigative Journalism. The nonprofit Center (www.WisconsinWatch.org) collaborates with WPR, Wisconsin Public Television, other news media and the University of Wisconsin-Madison School of Journalism and Mass Communication. All works created, published, posted or disseminated by the Center do not necessarily reflect the views or opinions of UW-Madison or any of its affiliates.

A map from October 2018 shows the distribution of chronic wasting disease across North America.

Bucks are seen in September in one of the pens at the Wilderness Whitetails breeding farm in Rosholt, Wis. Fatal chronic wasting disease has spread among Wisconsin’s wild and captive deer populations since 2002. 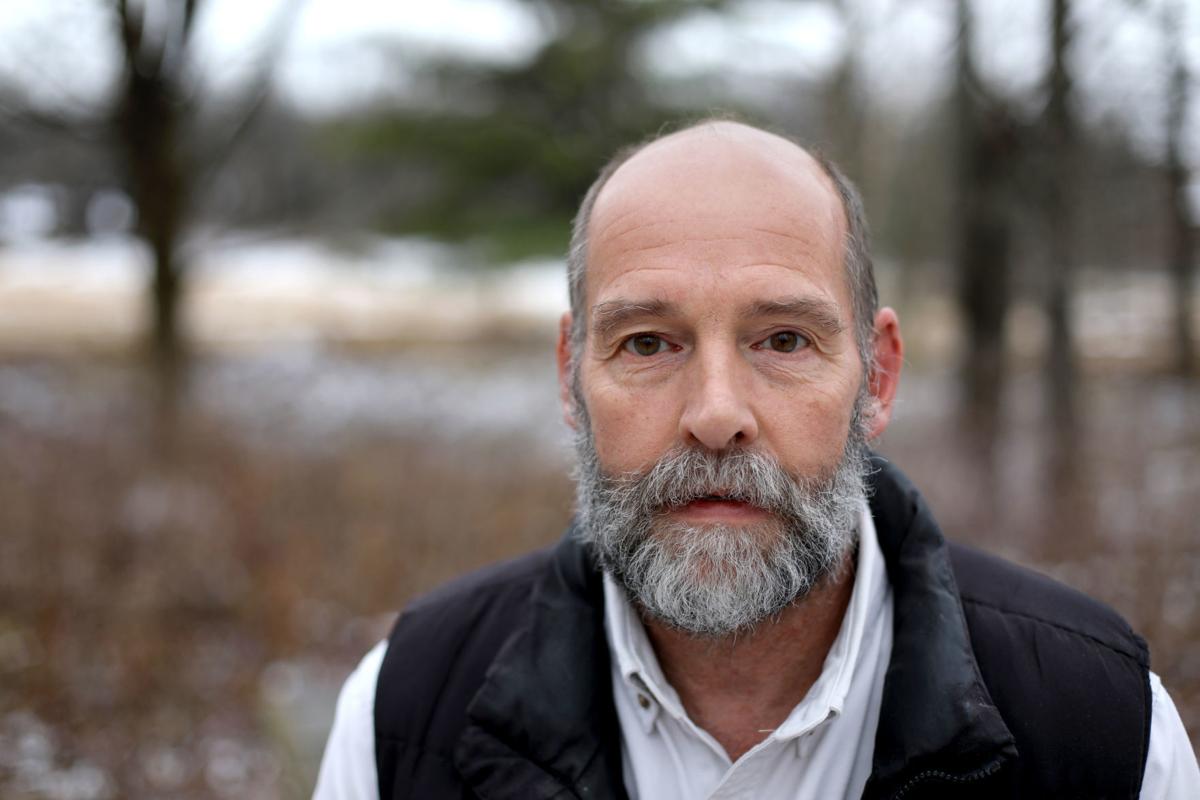