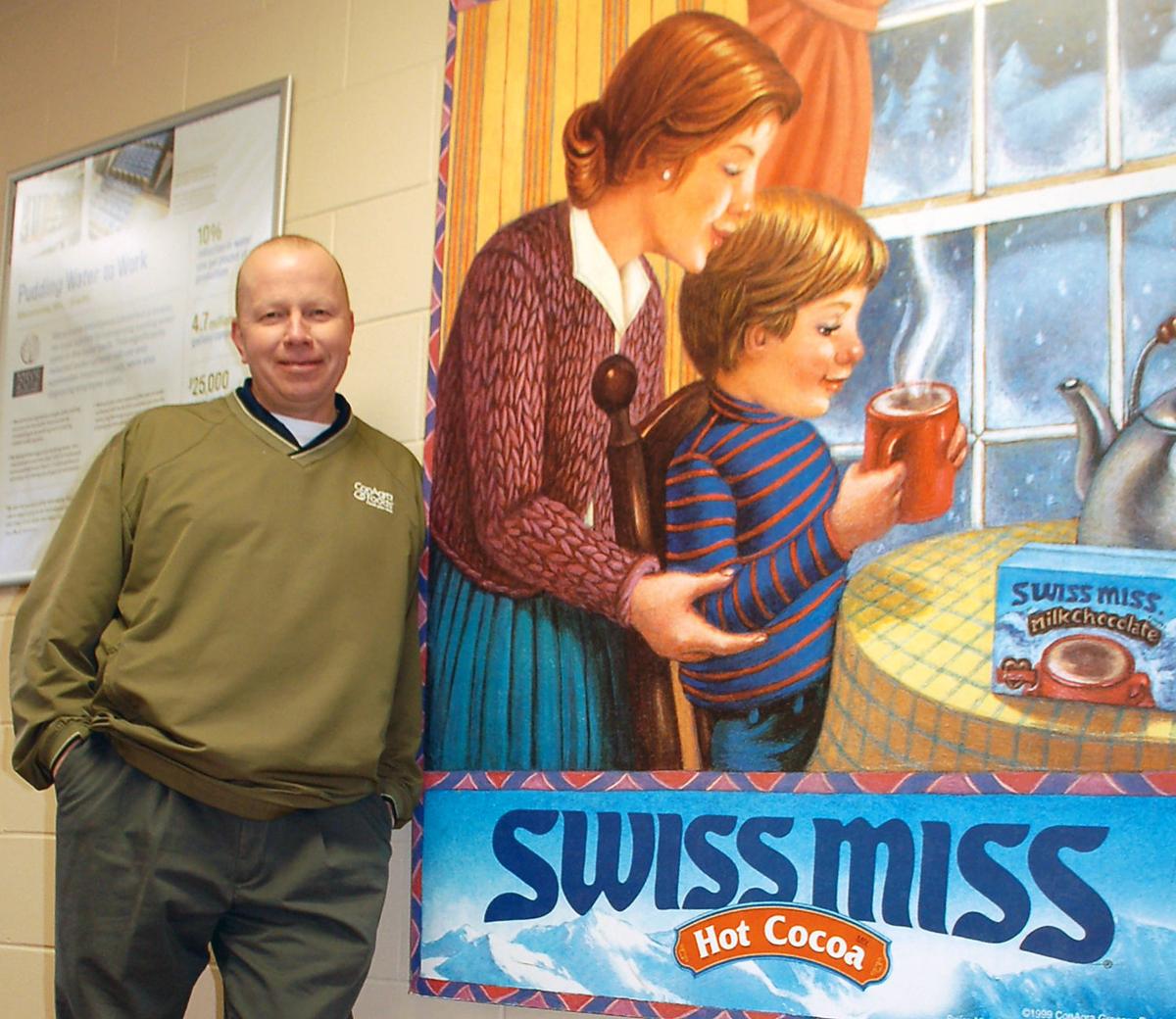 Jeff Stevens, plant manager of Conagra Brands’ Menomonie plant, stands alongside the Swiss Miss poster that hangs in the visitors’ entryway of the plant. 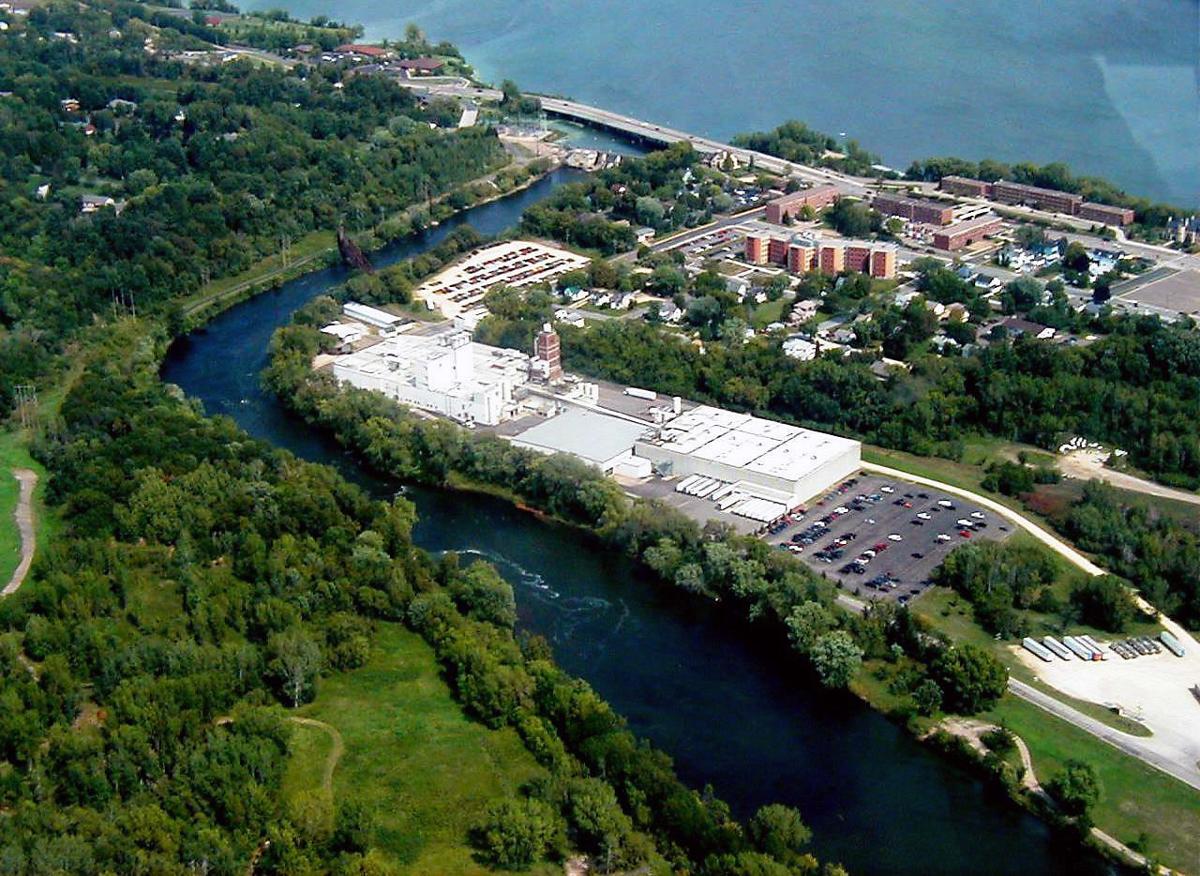 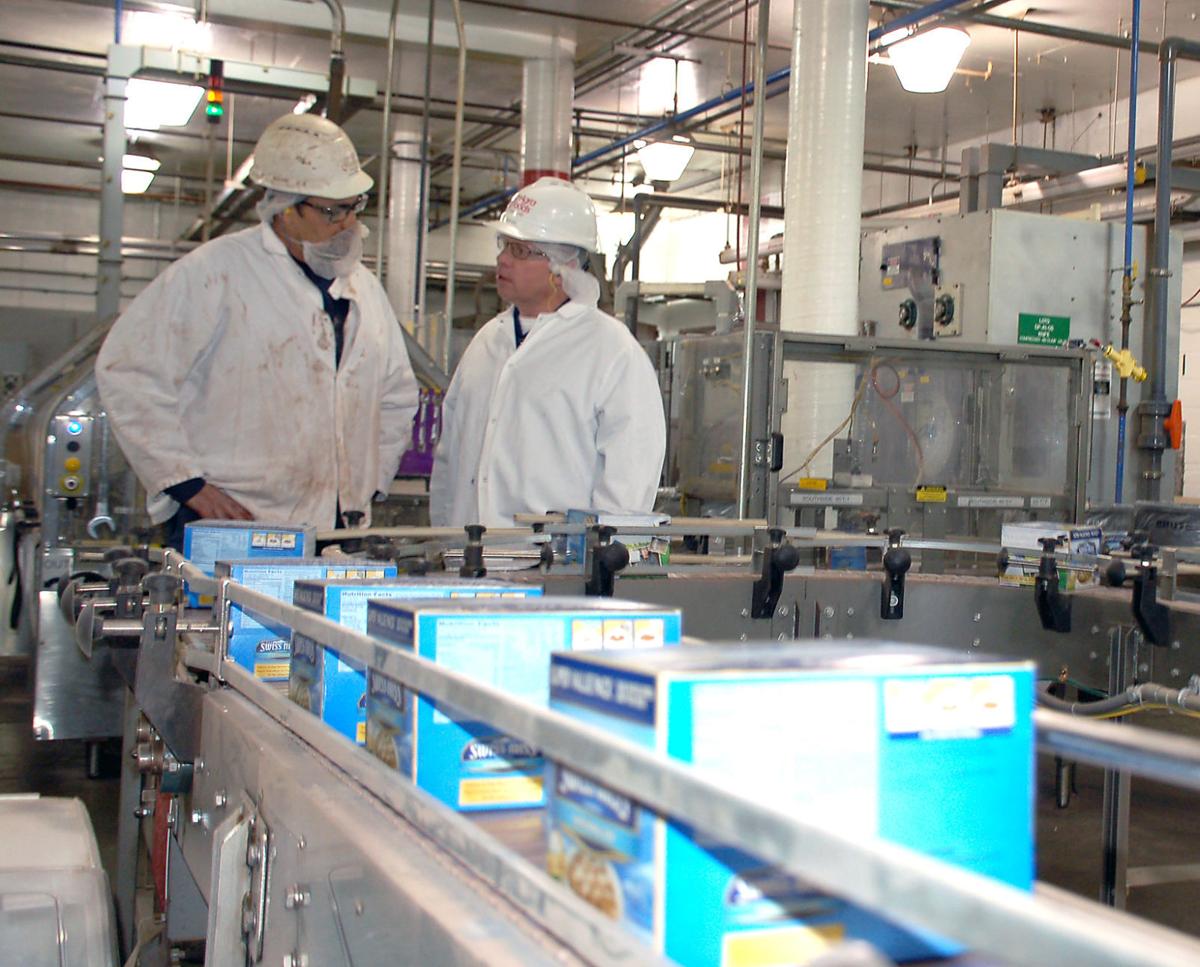 Operator Kevin Jensen discusses line performance with plant manager Jeff Stevens on Line 1 in the dry packaging area. The product on the conveyor is Swiss Miss Hot Cocoa, in transition to a case packer. 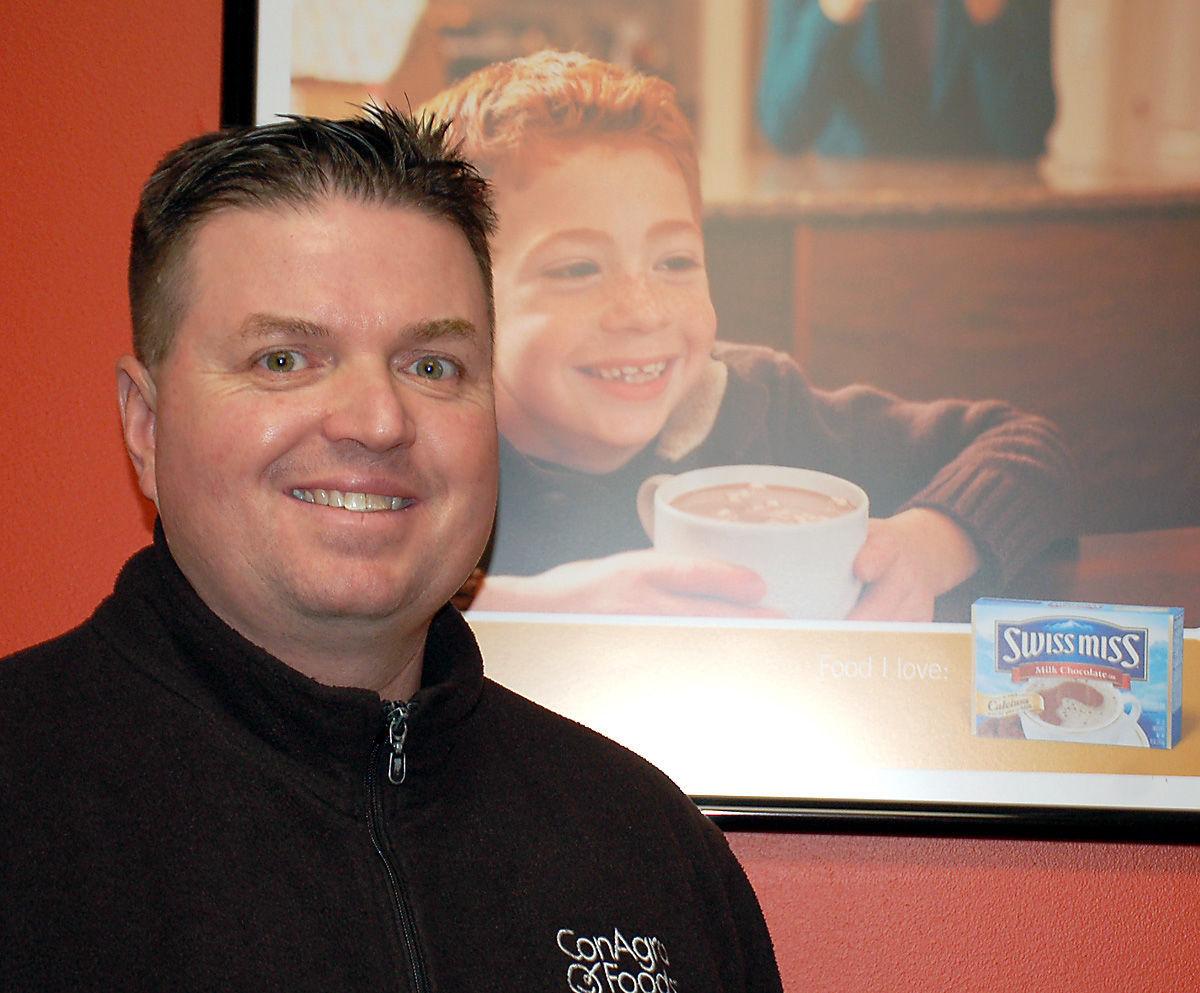 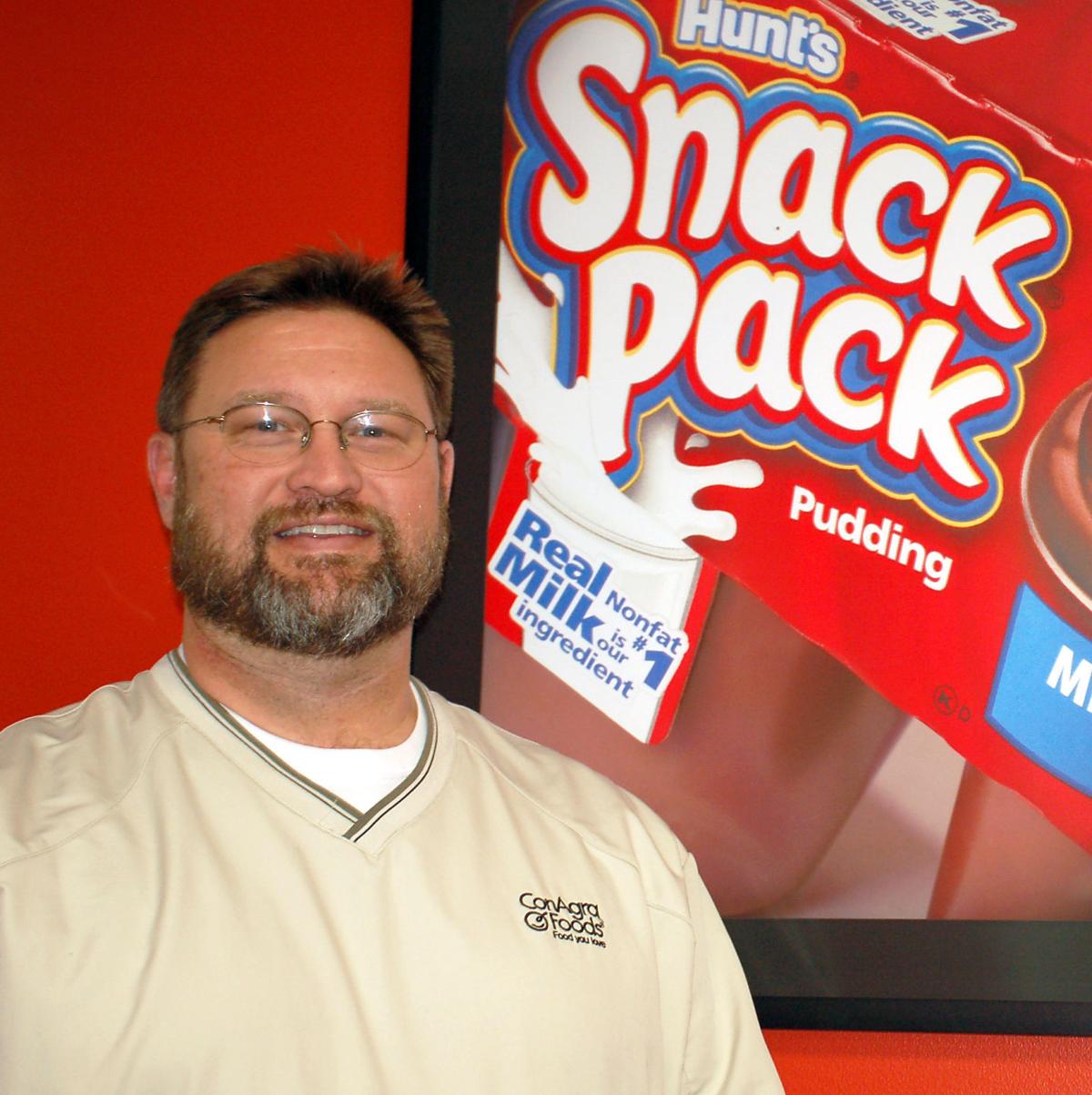 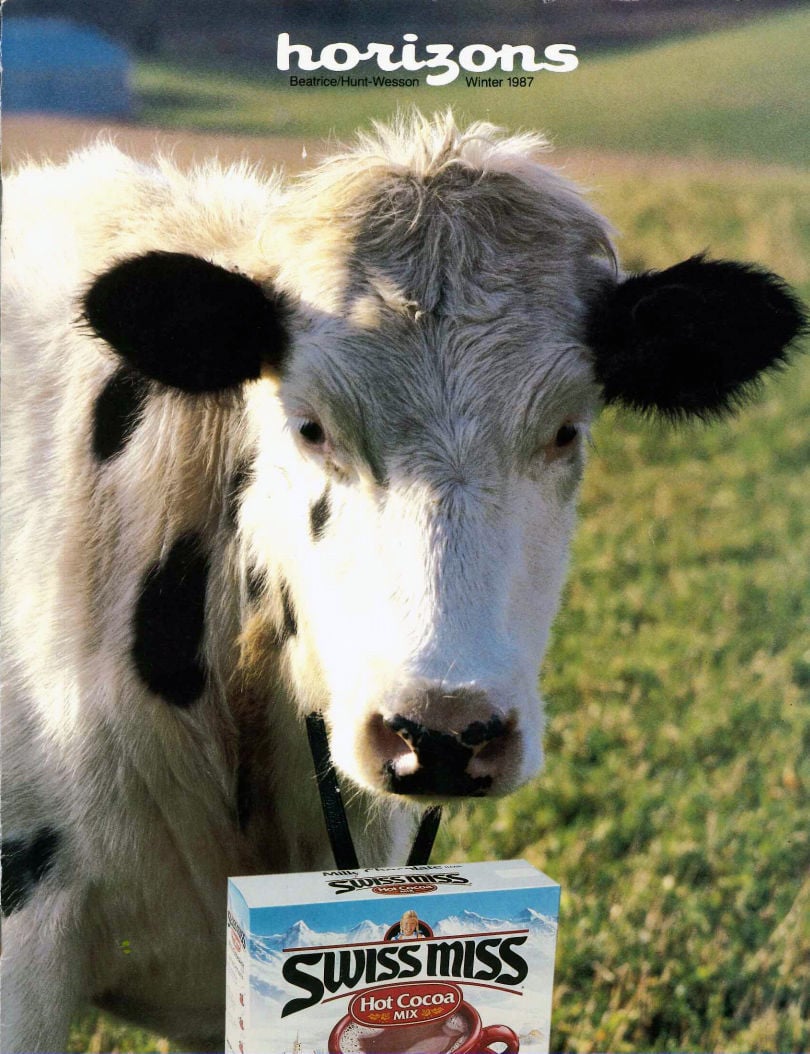 The Conagra Brands plant in Menomonie is the only one in the world that makes Swiss Miss Hot Cocoa Mix.

Covering more than 21 acres along the Red Cedar River in Dunn County is the world’s only source for a hot, steaming cup of Swiss Miss Cocoa. Well, make that 1.2 billion cups. That’s how many servings of cocoa are produced annually at the Conagra Brands plant in Menomonie, the birthplace of the world-famous brand.

Along with Swiss Miss Cocoa, the other consumer brands the plant produces are Swiss Miss Pudding packs (refrigerated), and shelf-stable Snack Pack GELS and Pudding packs. It also delivers dry, condensed and evaporated milk products to industrial clients. All this is made possible from the massive amount of milk processed there every day — milk provided by 70 farms in the area.

“The fact 600,000 pounds of raw milk come here every day and within three days become pudding, cocoa and other products is still, after all these years, just fun,” says Jeff Stevens, plant manager. “The sheer volume of cocoa powder, sugar, milk,and other raw goods moving through here is just incredible.”

Examples of that sheer volume include the 432 million servings of pudding and gels the plant produces a year. In addition to the millions upon millions of cocoa mix packets filled there annually, 50,000 pounds of the 600,000 pounds of raw milk arriving daily leaves the plant as cream.

The cream is sold far and wide on the open market, with much of it purchased by ice cream manufacturers.

Turns out the comfort food center of the universe is right here in the Chippewa Valley. As for the Swiss Miss side, it all started by accident.

The plant opened its doors as the John Wildi Evaporated Milk Company in 1917, enjoying success for a number of years before eventually closing, according to local historian John Russell’s column in the Dunn County News. The building was purchased and rehabilitated by Nestle Food Co., employing up to 200 people at its height of operation, but was one of many businesses to close during the Depression. After World War II, Sanna Dairies purchased it.

With the Sanna purchase, the evaporated milk plant started drying milk. “The Sanna brothers invented our spray dryer,” says Toby Auth, processing lead. “It is one-of-a-kind, as they were on the leading edge of this technology. We still use it today.”

The brothers reportedly developed the dairy’s dried-milk products based on a process first created by their father, Anthony R. Sanna, a Sicilian immigrant. Sanna Dairies, founded in the 1930s in Madison, initially concentrated on fluid dairy products and distribution. Their new drying process allowed them to introduce their first nationally-marketed product, Sanalac, in the mid-1940s. It was said to be the first instant dry milk on the market.

Many more consumer products followed, including Swiss Miss, the first instant hot cocoa mix. The story goes that one of the dryers sometimes went into hyper-dry, resulting in milk that appeared “specked.”

“So the Sanna brothers asked, “What do we do with this?” says Aaron Richartz, human resource manager at Conagra. “It tasted fine. The quality standards were fine. So they started mixing cocoa and sugar with it, and a few other ingredients that are now trade secrets, and that was the invention of the dried, hot-cocoa mix business.”

Initially they sold the mix exclusively to commercial airlines as a luxury drink. Today it is distributed across the globe, with the most recent interest emanating from less-wintry climes.

“It has really taken off in the Philippines, where it’s earning a reputation as a comfort drink,” says Auth. “Our sales group is enjoying great success there.”

In fact, the Facebook page Conagra started a couple years ago has more than 700,000 likes, whereas the U.S. page (where hot chocolate has long been a winter staple) has only 42,000.

“One of the things that has made the Swiss Miss brand successful is quality and taste,” says Jonathan Kruesi, senior brand manager, Sweet Snacks, Conagra Brands. “The fresh Wisconsin milk delivers a rich, creamy taste, while being made easily with hot water. The highly skilled Menomonie workforce helps ensure the consistency and quality that enables Swiss Miss to now expand globally. Swiss Miss Hot Cocoa is now sold in Latin America as well as Asia.”

Sanna Dairies was sold to Beatrice Foods in 1967, but the Menomonie plant continued to produce products under Sanna brands, such as Swiss Miss and Sanalac. The pudding lines were added in the 1980s, evolving over the years to add the Snack Pack GELS. The plant was sold to ConAgra Foods in 1990.

Conagra Brands is an $8 billion company that moved its headquarters from Omaha, Neb., to Chicago last year. A Nebraska family founded the company in 1919 after purchasing four grain mills. The new business, Nebraska Consolidated Mills, eventually expanded into milling flour and invested in the development of Duncan Hines cake mixes as a new market for its flour.

In 1970 the company name changed to ConAgra Foods, and 10 years later purchased its first private label, Banquet Foods. Today it has 40 plants across the country, employing more than 13,000 people.

Two years ago the company changed its name from ConAgra Foods to Conagra Brands and spun off its private-label brands to focus on its well-known consumer brands, including Healthy Choice, Slim-Jim, Reddi-wip, Hunts, Banquet, Marie Callender’s, and the Menomonie-based brands.

“This plant is a strategic site for Conagra Brands,” says Stevens. “We have unique capabilities within the corporation, especially with our dairy operation that includes blending, the spray dryer, filling dry powders or aseptic packaging.”

Another recent change at the corporate level is a new commitment to producing more natural products by avoiding artificial growth hormones and replacing artificial flavors with real ingredients, such as Menomonie-made cream. Menomonie employees and farms that supply the plant are featured prominently on the Swiss Miss website.

“Most of our products off-the-dryer are sold within Conagra to other Conagra plants,” says Auth. “For example another plant uses our dried milk to make the crust of a Banquet chicken pot pie.”

The volume of product produced at this plant is better appreciated when taking a plant visual or two into account.

“We mix pudding and gels in 18,000-pound batches,” says Chris Larson, Conagra’s continuous improvement manager. “The Menomonie High School swimming pool holds 300,000 gallons of water. We can fill that pool 90 percent full every week with the pudding and gels we make.”

The plant is also able to store two millions pounds of fluid product at a time, with 900,000 pounds of that as raw milk.

Some of the area farms that supply the plant are second- and third-generation farms. Even some of the employees cross generations. “We have multiple employees who have been here more than 40 years,” says Richartz. “There are also two generations from the same family working in different areas.”

Among locals, the plant is still often referred to as the “Sanna Dairy” or the “Swiss Miss” plant. For the nearly 300 full-time employees and their families, the Conagra plant — which runs three shifts a day, seven days a week — is continuing to provide a solid living for them with product lines that are fairly recession proof.

Long gone are the days of employees having to hand-fill each Swiss Miss carton with packets, as the plant’s fastest line in that division now fills about 1,000 packets a minute. Robots now palletize cases of product — work that once had to be done by hand.

“Updating the plant with new technology, automation, is a journey for any business like ours,” says Auth. “We’re always seeking ways to make things more efficiently.”

Stevens says that the emphasis on safety, quality, customer service and managing cost is helping to position the plant for new projects in the coming years. “We are always looking to attract further innovation through our performance as a plant and earn the right for the investment. We are working on a couple of different projects that we hope will secure our future.

“As we think about celebrating our 100-year anniversary in 2017, I would say it is our people and our culture that make the difference,” he said. “At every level in this plant, this team is the best I’ve had the privilege of working with, and I think that is just a reflection of the entire Menomonie community.”

Judith Munson of Eleva is a freelance writer and owner of Write Now Media. She can be contacted at jmunson.wnm@gmail.com

Jeff Stevens, plant manager of Conagra Brands’ Menomonie plant, stands alongside the Swiss Miss poster that hangs in the visitors’ entryway of the plant.

Operator Kevin Jensen discusses line performance with plant manager Jeff Stevens on Line 1 in the dry packaging area. The product on the conveyor is Swiss Miss Hot Cocoa, in transition to a case packer.

The Conagra Brands plant in Menomonie is the only one in the world that makes Swiss Miss Hot Cocoa Mix. 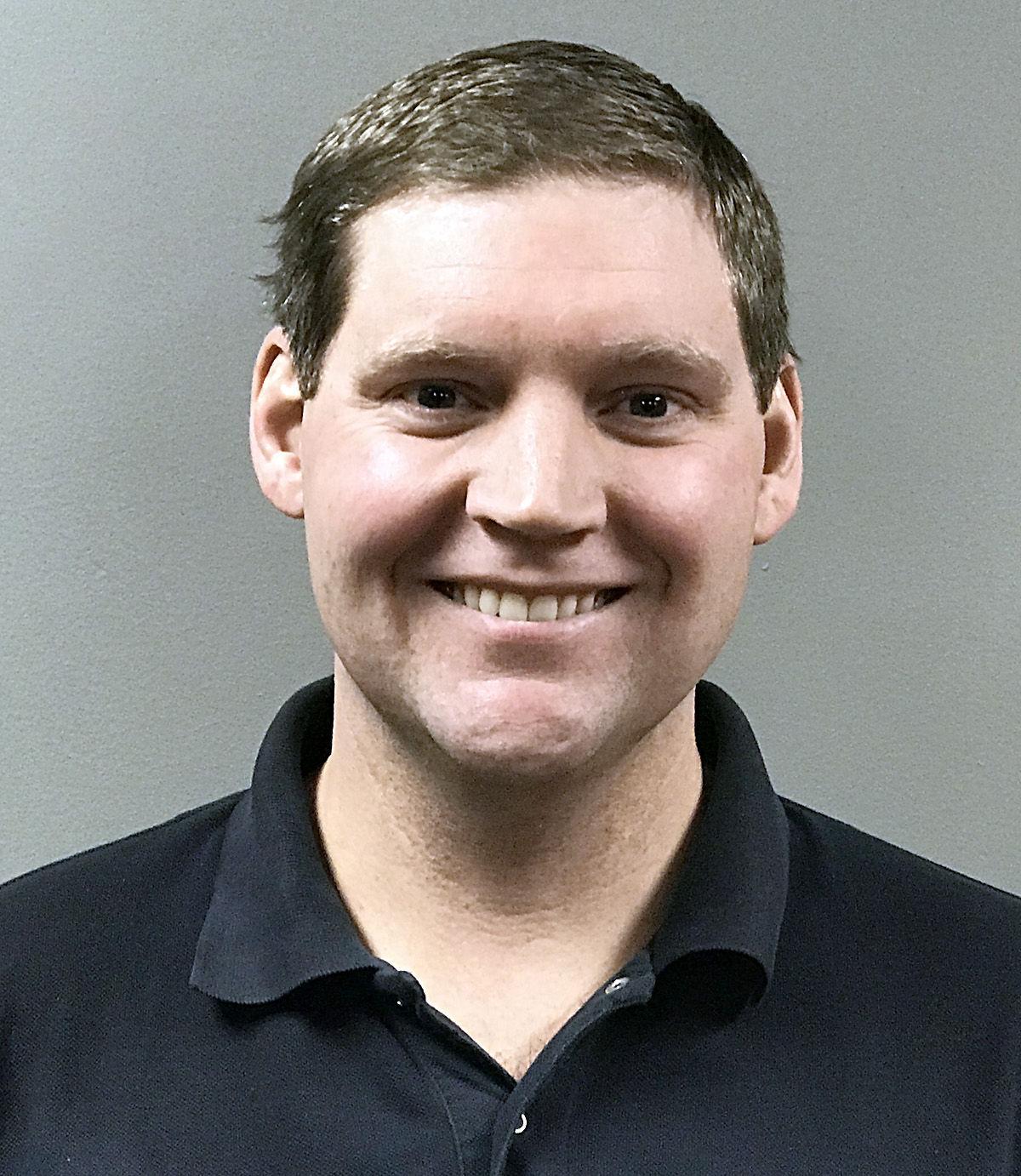