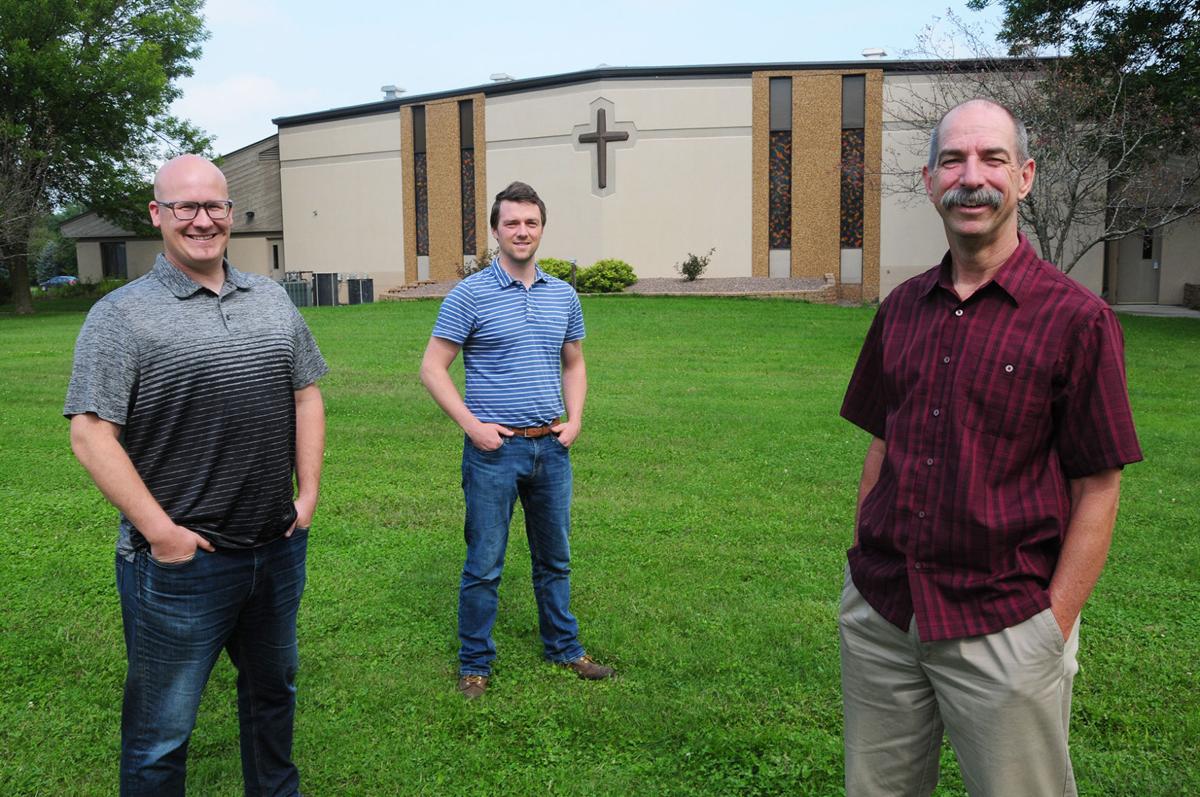 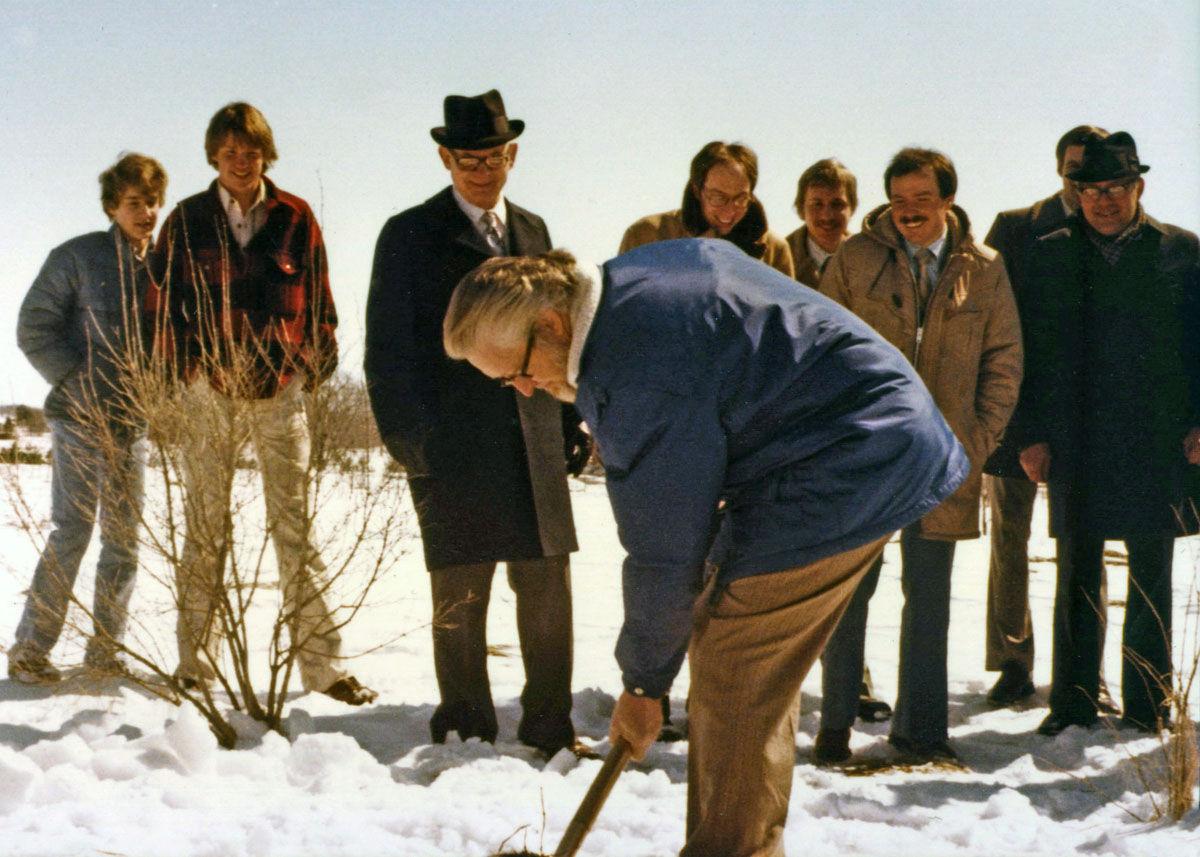 Dr. Roger Natwick, center, wielded the shovel to break ground in 1979 for a new and larger Menomonie Alliance Church on 21st Street. 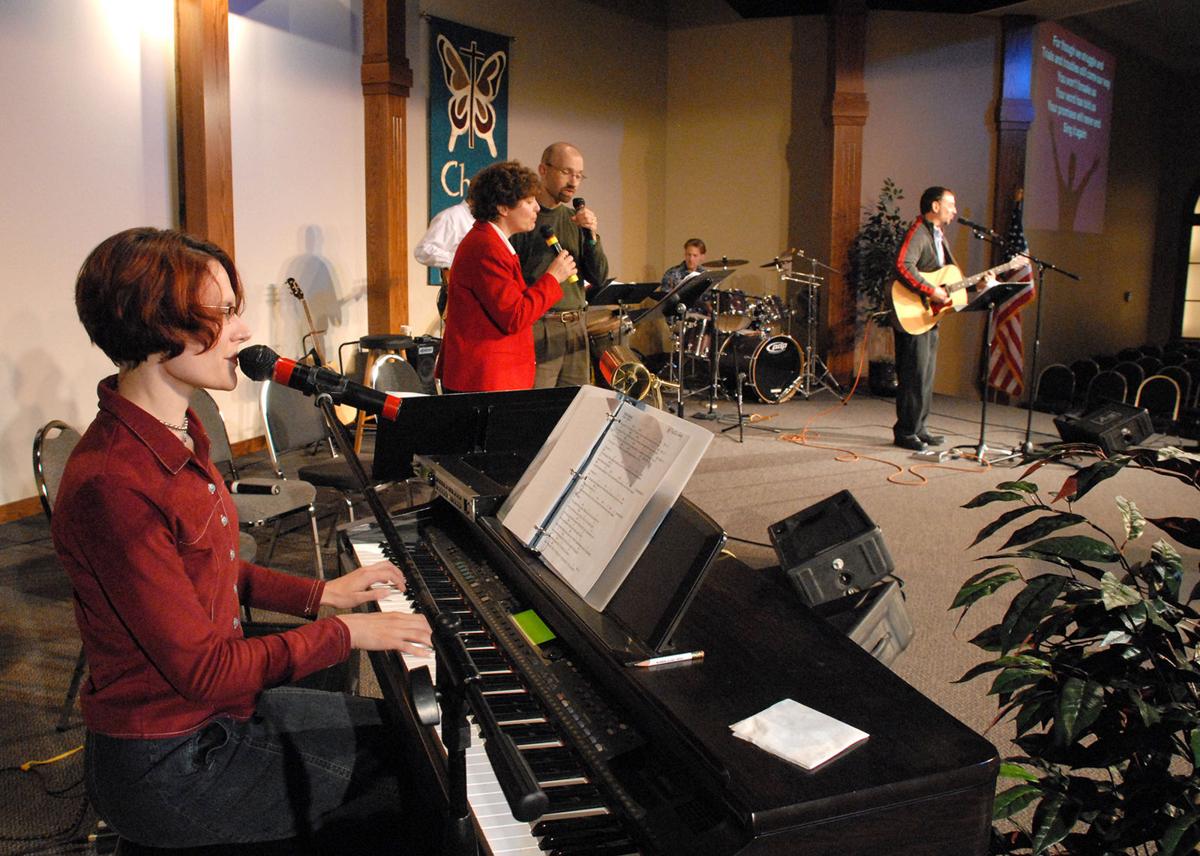 Menomonie Alliance Church will marks 50th years with a celebration weekend Saturday and Sunday, Sept. 16-17. Under the theme “Offering Hope for 50 Years,” the congregation will observe the anniversary throughout the following year.

The church will hold an open house Saturday, Sept. 16 beginning at 6:30 p.m., then will hold a 50th anniversary celebration worship service Sunday, Sept. 17 at 9:30 a.m. A lunch will follow the service.

Former pastor Rich Brown will be bringing the morning message. Former pastors Gary Benedict and Jack Stimmel will be participating in the service as well.

Menomonie Alliance Church grew from a home Bible study hosted by Roger and Joanne Natwick, and led by Rev. Stanton Richardson of St. Paul Bible College (now Crown College). The church is part of the worldwide work of the Christian and Missionary Alliance, founded in 1887 for the purpose of bringing the Gospel to the world.

Rev. Rueben and Joyce Strecker arrived in August 1967 to serve as the first resident pastor. Sunday worship services began Sept. 17, 1967, at the former Immanuel Baptist Church on the corner of South Broadway and 15th Ave.

On Jan. 11, 1968, the church was formally organized with 22 charter members. Construction of a church building at 200 21st Street North. began in May 1968, with Strecker serving as the general contractor and participating in the work as a bricklayer. Worship services were first held there in Oct. 1968, and the building was dedicated May 4, 1969.

In 1970, Rev. Arnold and Mary Leigh Woodring arrived and he began serving as pastor. During his pastoral ministry, men began going to Stow, Ohio, for training in home Bible study.

In 1973, Rev. James and Flo Bulkley began their ministry, demonstrating Christ's love to the congregation.

Rev. James and Millie Stone began their ministry in 1975. During his tenure, the church sponsored resettlement of a Vietnamese family.

In 1977, Rev. Gary and Betty Benedict came to serve the congregation. He is remembered for encouraging members to implement their ideas, for growing the congregation and for exemplifying and supporting unity.

Pastor Benedict left for a development position at St. Paul Bible College in St. Bonifacius, Minn., and served a stint as district superintendent. He returned to serve at Crown College as president from 1997 to 2005, when he left to serve two terms as president of the Christian and Missionary Alliance denomination.

The congregation outgrew the original facilities and in March 1979, groundbreaking services were held for the present building at 502 21st Street North. Worship services were first held there Jan. 13, 1980.

Menomonie Alliance Christian School was started in 1981 as a ministry of the church, with Hector Cruz serving as the school's first principal. Initially the school offered kindergarten through grade three, and was offering classes through eighth grade by 1996. At one point, school enrollment exceeded 100 students. The school ministry ended at the completion of the 2007-08 school year.

Rev. Rich and Kathy Brown arrived in 1983 and began both a teaching ministry and a music ministry among the people at Menomonie Alliance. Pastor Brown later taught at Simpson College in Redding, Calif., until his retirement.

In 1987, Rev. Peter and Edwina Bergen began their ministry at the church. During the Bergens' time here, the women’s ministry expanded. The Bergens showed an interest in people from all walks of life.

Rev. Bruce and Mary Leastman served from 1990 to 1992. During Pastor Leastman’s tenure, the church added an office suite, the fireside meeting room and classroom space on the north and south sides of the building.

Rev. Jack and Diana Stimmel arrived in 1992 to begin their ministry. The couple had served five years as missionaries in South Korea, followed by several teaching and administrative positions at Crown College.

Growth of the church brought another building addition to the east that included a kitchen, gymnasium, expanded library and nursery space and additional classrooms.

Pastor Stimmel served the longest tenure of any senior pastor at the church, leaving in 2010. The couple returned to the mission field, serving as pastors to missionary families while based in a former Soviet Union country.

One of the major thrusts of the Stimmels' ministry was an emphasis on prayer, as the church hosted regional College of Prayer events, and encouraged participation in the national movement.

Rev. Doug and Debbie Stolhand began their ministry with the church in 2009, when Pastor Doug joined the staff as administrative pastor. But the couple was not new to the congregation. While Doug served as director of short-term missions for the Evangelical Free Church of America, the Stolhands were based in Menomonie before he joined the staff. Pastor Stolhand became lead pastor in July 2010 and serves the congregation today.

Congregation members, including youth, regularly take part in short term mission projects locally, nationally and across the globe. In the last 10 years, adult groups have traveled internationally to work on projects from digging wells for clean water and providing hygiene classes, to aiding with organizations that seek to end sex slavery through prevention. Former members have become effective lay leaders in their new church homes.

Church members and families have served as missionaries, either through the Alliance or with other Christian organizations, in Botswana, Cameroon, Ecuador, Guinea, India, Ivory Coast, Lithuania, Mali, Mexico, Mongolia, the Philippines, Russia and Zambia, as well as other countries.

During the 2000s, the church joined in a strategic partnership with Alliance missionaries in Mongolia, where church members Dennis and Marilyn Maves served as field directors. Another family with deep roots in Menomonie Alliance, are currently serving in Mongolia. Nikki Larson served an extended internship on the Mongolian field. As part of the partnership, the church has sent several teams, including a summer youth group project.

Visiting missionaries present challenging and informative messages concerning the work of missions in other lands as part of an annual missions conference.

The congregation participates in a variety of ministries including Sunday School classes for all ages, youth and college ministries, worship team, women's and men's fellowships, prayer meetings, AWANA, and summer Vacation Bible School. Since its inception 50 years ago, the church has ministered to and worshiped with UW-Stout students.

Throughout the years, the congregation has participated in many community-wide outreach programs, including bringing in professional athletes to share their Christian walk at men's banquets, puppet ministries in the parks, the Great Pumpkin Party halloween alternative, musical concerts, Sportsmen’s Expos and banquets, children’s Sports Camp working with the local Free Clinic, hosting the American Red Cross and opening the building to a variety of community events.

Today approximately 300 worshipers regularly attend the two Sunday morning services during the school year. Youth programs and prayer meetings are held on Wednesday evenings, along with a variety of growth groups and many other activities throughout the week. The church offers one Sunday morning worship service in the summer months.

Senior pastors who have served

Dr. Roger Natwick, center, wielded the shovel to break ground in 1979 for a new and larger Menomonie Alliance Church on 21st Street.