Imagine telling someone that would be the case in March. They’d call you nuts or if it was around St. Patrick’s Day, accuse you of being a little bit over served.

But it’s true and the team assumed by most to finish fourth at best in the division enter the second half of the season with some wiggle room in front of the Chicago Cubs and St. Louis Cardinals.

Even though the Brewers had just one representative in this year’s midsummer classic — flamethrowing closer Corey Knebel, who did not play — the Brewers are built as a team that could have some staying power in the division title race. The offense is balanced with six players hitting at least 10 home runs and 10 players worth at least 0.8 Wins Above Replacement (not the be all end all statistic, but still helpful) according to FanGraphs. Chase Anderson (before his injury) and Jimmy Nelson have taken big steps forward as top-of-the-rotation arms and Matt Garza has been a perfectly fine veteran option, despite the vitriol he may receive from the team’s fanbase from time to time.

Knebel has taken over for the released Neftali Feliz better than anyone could have imagined (15.94 strikeouts per nine innings) and Jacob Barnes and Jared Hughes have also been mostly dependable in relief.

But as the Brewers have maintained their position atop the division standings, the conversation has changed from ‘OK, when are they going to fade?’ to ‘Can this team actually win the division?’

Fresh off a long-awaited World Series title a season ago, the Chicago Cubs had the look of a dynasty but thus far have underachieved as have the Cardinals. For the first time in three years, Brewers fans exit the All-Star break thinking about a possible playoff appearance instead of who might be traded at the end of the month.

Milwaukee owns a 55 percent chance of reaching the postseason according to projections from Baseball Prospectus, better odds than the Cubs (40 percent) and the Cardinals (20 percent).

But memories of rough finishes from 2007 and 2014 as well as mostly a lifetime of middle-to-lower pack placement have many fans questioning the validity of what they’ve seen thus far. Can a lineup made up of players, many getting their first real chance to play everyday at the big league level, continue to produce like this? Can a rotation without Anderson continue to get solid production from Nelson, Garza and Brent Suter while last season’s best two starters Junior Guerra and Zach Davies look to work through struggles? If the team looks to make a move to add talent from outside the organization, how much will it dig into the coffers of its rebuilt farm system? And will the team be able to hang on if/when the supremely-talented Cubs and always-finding-a-way Cardinals heat up in the dog days of summer?

I don’t have the answer to this, but it’s certainly a lot more interesting and exciting than watching a team without much to play for or counting down the days until NFL training camps start. It’s very possible the Cubs and/or Cardinals will heat up the second half and possible the Brewers could hit some hard times and ultimately not win the division.

But enjoy what you have in front of you, which is a Milwaukee Brewers team ahead of schedule and under budget winning the battle right now in the National League Central Division. It’s easy to sit off to the side, wait for a team of falter, point your finger and say ‘I told you so’.

But where’s the fun in that? And if that’s your approach, what’s the point in keeping track in the first place?

The window to win has opened up sooner than expected. Enjoy the breeze. 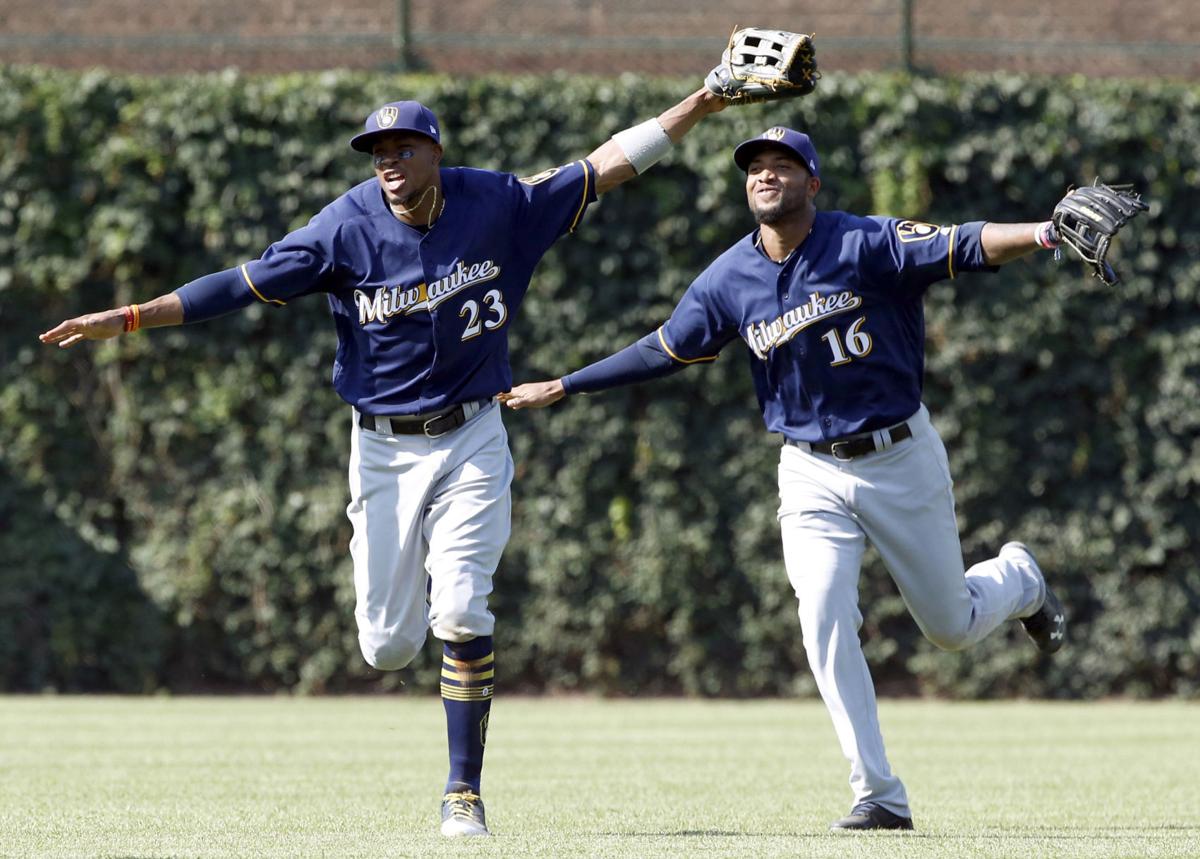 Milwaukee Brewers’ Keon Broxton, left, and Domingo Santana celebrate after the Brewers defeated the Chicago Cubs 11-2 on July 6 in Chicago. The Brewers open the second half of the season on Friday with a five-and-a-half game lead in the National League Central Division.