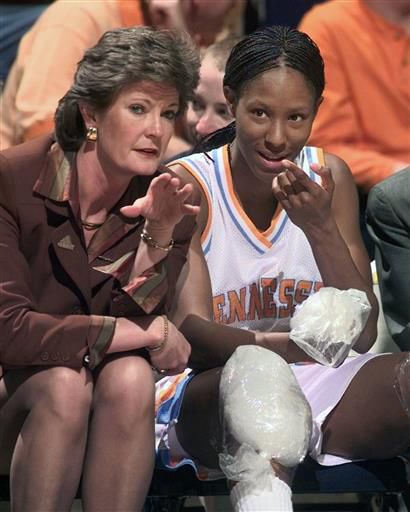 Other than a handshake after one of her speeches, University of Wisconsin-Stout women’s basketball coach Mark Thomas had never met University of Tennessee coach Pat Summitt. But he certainly was affected by the way she conducted herself, both on and off the basketball court.

Summitt, who passed away Tuesday morning at the age of 64, guided the Tennessee women’s basketball program to eight national titles during her 38 seasons with the Lady Vols. She led Tennessee to 1,098 victories, the most in Division I college basketball, both men and women. Summitt stepped down in 2012, one year after announcing she had early onset dementia, Alzheimer’s type.

“The loss of coach Summitt is heartbreaking, not only in the basketball community, but to the world,” Thomas said. “She was able to be both tough and compassionate. ... She demanded excellence, yet showed so much love and care for her players, staff and anyone she came in contact with. Everyone around her took on those same qualities of competitiveness and kindness. ... To be an icon or legend is unbelievable, but to be both is truly amazing. The world lost a true one of a kind.”

Thomas tells a story of how Summitt rubbed off on one of her players.

During the 1995 NCAA Women’s Basketball Final Four, Thomas and his family secured tickets when the tournament was held in Minneapolis, Minn.

“My youngest daughter was about 6 or 7, and we had seats near the Tennessee bench,” Thomas said. “We went early for the pregame. As the Lady Vols made their way back to the locker room, my daughter went to the railing and (All-American) Michelle Marciniak stopped to talk to her. She told her to cheer and Marciniak would listen for her when the game started. ... Tennessee went on to lose the game and you know how tough that can be. After the game, Marciniak came up to Lesley and told her she could hear her cheer. When I got home, I wrote a letter to Pat Summitt telling her what a first class act that was.”

Two weeks later, the Thomas’ received an autographed photo from Summitt and Marciniak.

“With that goodness and toughness she possessed, you could see how much she cared,” Thomas said.

In a tweet posted Tuesday morning, Thomas said, “RIP Coach Summitt. Thank you 4 your courage and elegance. The world lost a true one of a kind. Coach T.”

A candlelight vigil was held at Pat Summitt Plaza on Tennessee’s campus on Wednesday. A private funeral was held in Clarksville, Tenn. on Thursday.