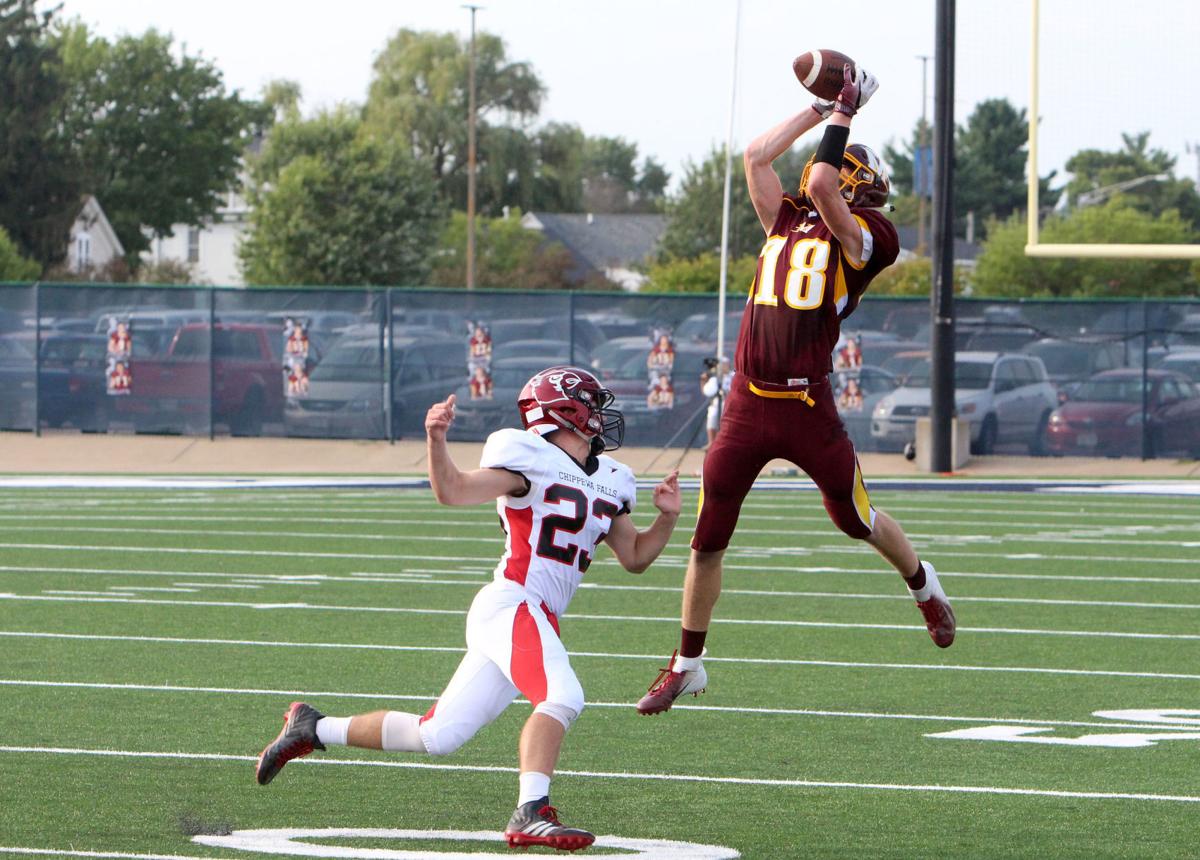 Menomonie's Sam Zbornik makes a catch during a game against Chippewa Falls on Aug. 31 at Don and Nona Williams Stadium in Menomonie. 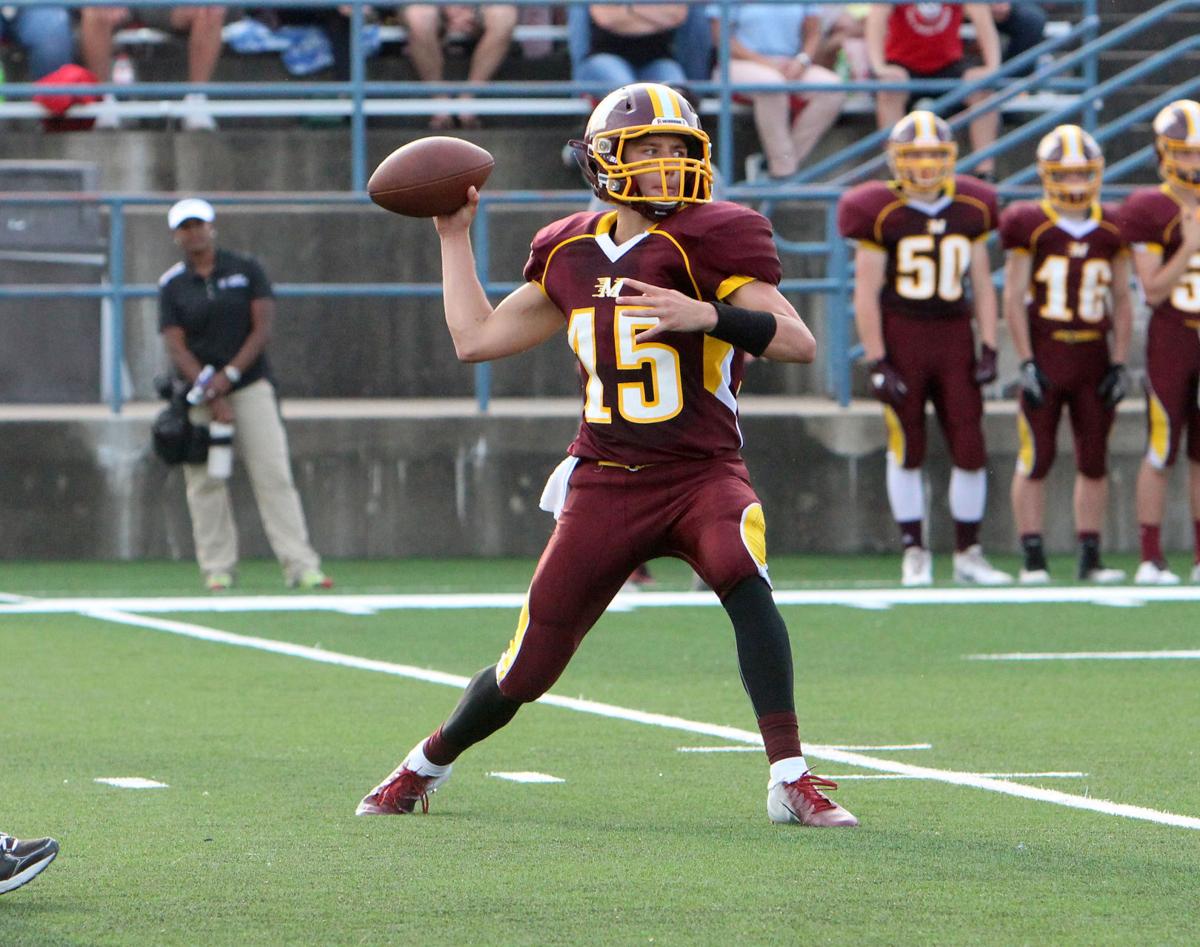 Menomonie's Sam Zbornik makes a catch during a game against Chippewa Falls on Aug. 31 at Don and Nona Williams Stadium in Menomonie.

The Menomonie football team has faced some tough tests early in the 2018 season.

And so for the Mustangs have passed them all, the latest coming in a 33-23 victory over Chippewa Falls last Friday in the Big Rivers Conference opener for both teams at Don and Nona Williams Stadium.

The Mustangs (3-0, 1-0) fell behind early 7-0, but scored the next 33 points to take a commanding lead before the Cardinals would add a pair of touchdowns in the fourth to trim the gap.

“The last two weeks we’ve shown a lot of character,” Menomonie coach Joe LaBuda said. “For the second week in a row we came out and got behind 7-0 and a lot of young teams will fold when they get behind and things don’t go well early and things didn’t go well for us early.”

Menomonie fell behind against Holmen 7-0 in their second game of the season before defeating the Vikings 19-7. The Mustangs beat Lake Mills 33-7 in the season opener.

The ground game was the way to for Menomonie in the win over the Cardinals as the Mustangs ran for 252 rushing yards and five touchdowns as a team. Kade Schultz had a big game in the win with 127 yards and four touchdowns while quarterback Jake Ebert added 76 yards and a third-quarter rushing score.

“We’ve got a long way to. We made a lot of mistakes tonight but the kids played hard and that made up for some of the mistakes,” LaBuda said. “I thought the kids played hard and our offensive line with no starters coming back (to start the season), I think they’re getting a little better each week. We’ve got a long way to go, but we’re showing improvements each week and that’s what we’ve asked them to do each week.”

Chippewa Falls (2-1, 0-1) would find the scoreboard first, taking advantage of a Menomonie turnover quickly when Matt Pomietlo would score on a five-yard touchdown run to stake the Cardinals to an early seven-point lead. But the Mustangs would answer soon after, working their way down the field and evening the score on Schultz’s first touchdown of the game, a 1-yarder with 5:49 left in the first.

Schultz added another 1-yard touchdown in the final minute of the second quarter to give the Mustangs a 13-7 lead at halftime.

Menomonie put some distance on the Cardinals in the third quarter. The defense held the Cardinals in check on their side of the field and the Mustang offense capitalized with touchdown runs from Ebert (from 23 yards out at the 8:27 mark) and Schultz (from 14 yards with 2:23 remaining in the third) to take the advantage to 26-7 after three.

“Our offense put our defense in a hole too many times,” Chippewa Falls coach Chuck Raykovich said. “We gave Menomonie too many short fields.”

Schultz’s final touchdown came a little more than a minute into the fourth to push the Mustang advantage to 33-7 with fewer than 11 minutes to go. The Cardinals cut the gap to 10 with a pair of touchdowns from Tyler Bohland, but Menomonie ran out the final few minutes of the game to score the program’s 10th win over Chippewa Falls in the last 11 meetings and the team’s 18th consecutive Big Rivers Conference win.

Matt Pomietlo ran for 63 yards before exiting the game due to injury to lead Chippewa Falls, an injury both coaches agreed impacted the game.

“If he doesn’t get hurt...I think that changed the game a lot. I think he’s one of the better backs in the area and I thought he was last year (too). If he doesn’t get hurt, I think that changes the game quite honestly and I’m not taking away anything away from our kids,” LaBuda said. “But I think you have to understand that with him getting hurt in this game it was a big turning point.”

Menomonie returns to action on Friday at River Falls.

The Chi-Hi football team traveled to Menomonie on Friday, Aug. 31, 2018 to face the Mustangs.