A cluster of little brown bats (Myotis lucifigus). Little brown bats often form clusters of up to hundreds of bats in order to maintain constant temperatures while hibernating. 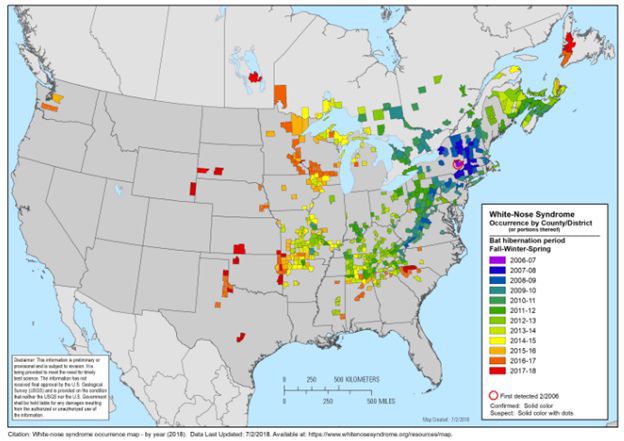 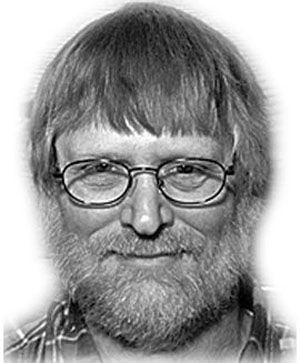 A cluster of little brown bats (Myotis lucifigus). Little brown bats often form clusters of up to hundreds of bats in order to maintain constant temperatures while hibernating.

My neighbor asked me if I had seen any bats lately. I thought about it and said, “no.”

In prior years, I could watch a dozen or more bats swooping above my yard when we were out sitting around a campfire. This summer, I have seen exactly one bat on one night and thought, “Oh no, white nose syndrome has arrived.”

I contacted J. Paul White, Mammal Ecologist with the Wisconsin Department of Natural Resources (DNR), and he confirmed that White Nose Syndrome (WNS) has indeed wiped out our native bat population.

“Unfortunately, all counties in Wisconsin, including Dunn, have succumbed to WNS,” White stated. “The deadly fungal disease has been in Wisconsin since 2014, first found in the far southwest corner of the state, but quickly spreading statewide in just a few years.”

It is a sad but sobering new reality for cave bat populations in Wisconsin as well as the Midwest as a whole.

WNS is a fungal disease that infects bats when they are hibernating in caves during the winter. The WNS fungus looks like white fuzzy powder on the bat’s face, hence the name. Pseudogymnoascus destructans, or PD for short, is the technical name for the deadly fungus.

PD damages the bat’s skin to the point that their bodies begin to warm up, causing the bats to become active in the winter. This in turn burns up the energy reserves they need to survive the winter.

Mortality rates of infected caves can reach as high as 90 to 100 percent. The cave where WNS was first identified in Wisconsin had a population of 1,000 bats prior to the the onset of WNS. In 2018, the population declined to just nine bats. There are no known caves or other underground places for bats to hibernate in Dunn County. Unfortunately, all the caves that Dunn County bats hibernate in are infected with WNS.

There are a total of seven species of bats that dwell in Wisconsin. Four of these species — the little brown bat, the big brown bat, the northern long-eared bat, and the eastern pipstrelle — are cave bats which hibernate underground for the winter.

The remaining three species — the silver-haired bat, the hoary bat, and the eastern red bat — migrate to warmer climes during the winter season. All seven species can contract WNS. All Wisconsin bat species eat insects. The average bat can eat 1,000 mosquito sized insects per hour. The bats eat all manner of night flying insects, especially mosquitoes. The big brown bat specializes in eating beetles that live in trees.

Diseases like WNS are especially devastating to bat populations because they have a slow reproduction rate and the bats live in close quarters. It is very common for bat species to mate in the fall and then the female stores the sperm until the spring when she becomes impregnated.

The gestation period lasts from 40 days to six months and produces one baby (called a pup). Since bats are mammals, the mother feeds the pup milk until its wings are fully developed and it can catch its own mosquitoes. Bats can live over 25 years.

There are many practices being used to slow the spread of WNS. One very important practice is for spelunkers and other people who venture into caves to decontaminate after every cave visit. The spores of PD can survive a long time and thus outerwear and gear must be decontaminated after being used or worn in a cave.

Decontamination procedures include removing dirt and crud from equipment and clothing immediately upon exiting the cave. All equipment and clothing should be stored in sealed bags. When possible, wash hands and other exposed skin or hair before leaving the site. Wash and rinse both submersible and non-submersible gear and clothing with mild cleaners like dish soap or liquid laundry detergent, pending manufacture’s recommendations. It is recommended that scientists use disposable or site-specific equipment when doing bat or cave studies.

Bat houses are another way to help the bat population. Bat houses must be built and installed in a way that is attractive to our few surviving bats. A bat-friendly house is at least two feet tall and 14 or more inches wide and is open at the bottom. The interior wood surfaces must be rough so the bats have something to hang on to when they are roosting.

The bats will need a spot at the bottom of the outside of the house to land. The landing spot should be at least four inches square with rough wood and be placed just below the opening of the house. Bat houses should be sealed up to avoid drafts but should have small vent holes. Avoid plastic and wire mesh as these can cause problems. Put bat houses in the sun and in a quiet location.

Scientists are trying a variety of ways to combat WNS. Several different chemicals or vaccines are being tested. The chemicals either slow down the growth of WNS or help bats increase their resistant to the fungus. Ultraviolet light is also being used to hinder the growth of PD in bat caves.

If you do have bats in your belfry or attic, celebrate! Unfortunately, the devastating effects of WNS on Wisconsin’s bat population means we will all be swatting more mosquitoes for the foreseeable future.

Jim Swanson is a Menomonie resident. He can be reached at james4j@wwt.net.