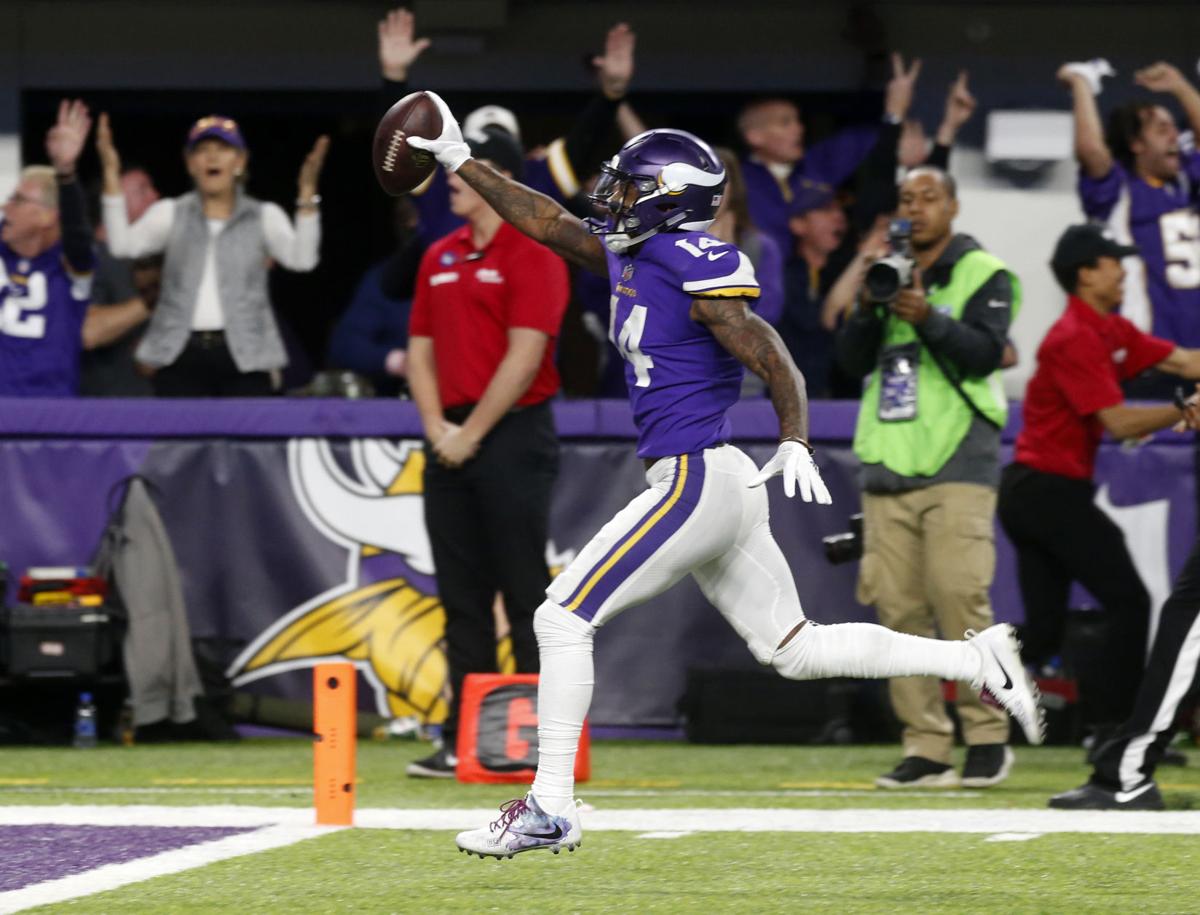 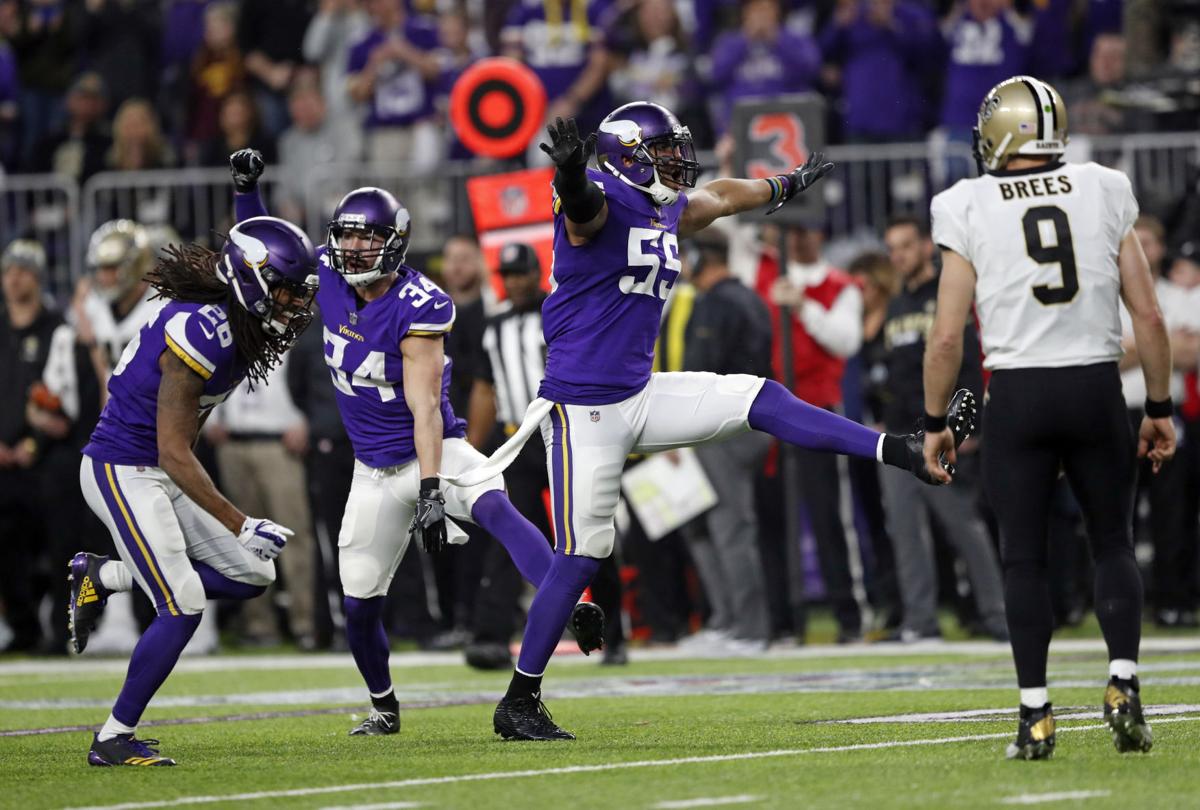 MINNEAPOLIS — There wasn’t much left for Case Keenum to do but to fling the ball deep and hope for a miracle.

Keenum completed a last-ditch heave near the sideline Sunday on the game’s final play, and Stefon Diggs slithered away for a 61-yard touchdown to give Minnesota a 29-24 victory over New Orleans and send the Vikings to the NFC championship game, with one more win needed to become a first-time Super Bowl host.

Drew Brees had driven the Saints in position for Wil Lutz’s go-ahead 43-yard field goal with 25 seconds remaining, punctuating a steely rally from a 17-point deficit that stood until 1:16 was left in the third quarter.

The Vikings were out of timeouts and nearly out of options when Keenum dropped back with 10 seconds to go from his 39 and threw high into a crowd. Diggs jumped in front of Marcus Williams, who rolled awkwardly underneath Diggs during an ill-fated attempt at a tackle.

Diggs held his ground, kept his feet in bounds and raced untouched into the end zone as the crowd at U.S. Bank Stadium erupted.

“I’m just thankful,” Diggs said. “They count us out all the time. Nobody thinking we can do it. This game was over. I don’t stop playing till the clock hit zero. That’s it.”

This wasn’t quite Franco Harris and the Immaculate Reception for Pittsburgh in the 1972 playoffs, but these Vikings are on some kind of special path.

They finished 13-3 during the regular season, giving the career backup Keenum the keys to the offense after Sam Bradford went down with a knee injury after the opener.

The Vikings will play at Philadelphia next weekend, after Jacksonville takes on New England for the AFC title. The Super Bowl is in Minnesota two weeks later.

Now the Vikings have spun an unprecedented scenario in NFL history. Next weekend, instead of the usual win-or-go-home stakes, they’re in a win-and-go-home situation with the Super Bowl set for Feb. 4 under the reverberating translucent roof of U.S. Bank Stadium.

Though only defensive end Brian Robison remains from the 2009 team that lost in overtime of the NFC championship game at New Orleans, the Vikings exacted some revenge on Brees and the Saints, at least for their long-frustrated fans.

They put them through quite the emotional finish to complete it.

Brees connected with Michael Thomas for two of his three touchdown passes in a span of 3:09 of the second half. The first score came after a 12-play, 80-yard drive. The second was set up at the Minnesota 40 by an interception by Williams after an off-balance throw by Keenum, his one costly moment of either inexperience or recklessness.

When George Johnson blocked Ryan Quigley’s punt, the Saints took over at the Vikings 40. Four plays later, rookie Alvin Kamara, whose breakout was a major factor in the team’s NFC South title and breakthrough from three straight 7-9 finishes, caught a 14-yard pass from Brees for a 21-20 lead with 3:01 left.

Forbath’s 53-yard field goal, his third make of the evening against his former team, gave the Vikings their lead back with 1:29 left. That was more than enough time for Brees, the sure-bet Hall of Famer with a Super Bowl ring and all kinds of records.

But after Brees got Lutz in position, there were just enough seconds remaining for Keenum — the undrafted and undersized all-time leading passer in NCAA history at Houston whose first career playoff start ended in spectacular fashion. He finished with 318 yards, going 25 for 40, with Diggs catching 137 yards on six catches.

“This will take a while to get over,” said Payton, who fell to 1-5 on the road in playoff games.

Brees saw his 13th career postseason game end in a crushing final moment, his 25-for-40 performance for 294 yards tainted a bit by two interceptions before halftime. One came on a leaping grab by safety Andrew Sendejo, the other off a tip by Everson Griffen that landed in Anthony Barr’s arms at the Minnesota 10-yard line midway through the third quarter.

FIRST-HALF FORCE: The Vikings came roaring out of their first-round bye, forcing punts by the Saints on their first three possessions and moving 55 yards in eight plays for a touchdown on their first drive. The shrewd play calling by offensive coordinator Pat Shurmur, culminating with a pitch to Jerick McKinnon for a 14-yard run after a fake jet-sweep, showed again why he was interviewed by four teams last week for head coaching vacancies.

Aided by two pass interference calls on Ken Crawley for 54 yards, the Vikings reached the 1-yard line before settling for a short field goal. They pushed the lead to 17-0 early in the second quarter when Latavius Murray plowed in from the 1-yard line.

The only other time the Saints went scoreless in the first half of a postseason game was five years ago. They fell behind 16-0 at Seattle in the divisional round and lost 23-15 to the eventual Super Bowl champions.

SENDEJO DOWN: The first touchdown to Thomas came one play after he leveled Sendejo with a jarring blindside block, sending Sendejo to the sideline for concussion evaluation and reigniting the crowd when the flag that was initially thrown was waved off.

KEY PLAY: Case Keenum found Stefon Diggs for a 61-yard touchdown as time expired to lift the Vikings past the Saints.

KEY PLAYER: Diggs finished with six catches for 137 yards and the game-winning touchdown.

COMEBACK: The Saints climbed out of a 17-0 hole to take a 24-23 lead with 25 seconds to play. But the Vikings miracle touchdown thwarted the comeback.

UP NEXT: Minnesota travels to Philadelphia for the NFC Championship game at 5:40 p.m. next Sunday.