Please subscribe to keep reading. You can cancel at any time.
Already a subscriber?
Log in or Activate your account.
Loading&hellp
No thanks, return to homepage.

MADISON — The COVID-19 vaccination center at the Alliant Energy Center in Madison will be able to increase the number of doses delivered by 2,100 a week thanks to new staffing support from the federal government starting on Wednesday, Gov. Tony Evers announced.

The state has committed to supplying 7,000 doses of vaccine a week at the Madison center, which has the capacity to inoculate 1,400 people per day, the governor’s office said Tuesday. The additional 26 staff from the federal government will allow for 2,100 more doses to be administered per week, depending on supply, compared with the 5,600 weekly doses currently, Evers’ office said. The mass clinic opened in late December.

“This is one of the largest vaccination efforts our state has undertaken and it takes teamwork at every level to ensure we are getting vaccine to everyone as quickly, fairly, and safely as possible,” Evers said in a statement. “I am grateful for FEMA’s support to our state and coordinating with our local partners to help our most vulnerable populations get the protection they need so we can all move forward from this pandemic.”

Everyone age 16 and over in Wisconsin is eligible for the vaccine. Health officials have urged patience, as supply was not expected to meet demand. An interactive map showing where vaccine is available is on the state health department website.

As of Tuesday, 33.4% of people in Wisconsin had received at least one dose and 20.4% were fully inoculated, according to the Wisconsin Department of Health Services. The push to increase vaccinations comes as positive coronavirus cases have been on the rise for the past month.

There have now been 29,475 negative coronavirus tests and 240 total hospitalizations (no individuals currently hospitalized) countywide to date.

Chippewa County’s risk level for the spread of COVID-19 is currently classified as “high.”

Wisconsin has now seen 640,000 cases of COVID-19 to date (less than 7,500 currently active) and 7,342 individuals have passed away statewide due to complications with coronavirus (a one-day increase of one life lost). 214 of the deceased died from other causes, according to their death certificates. 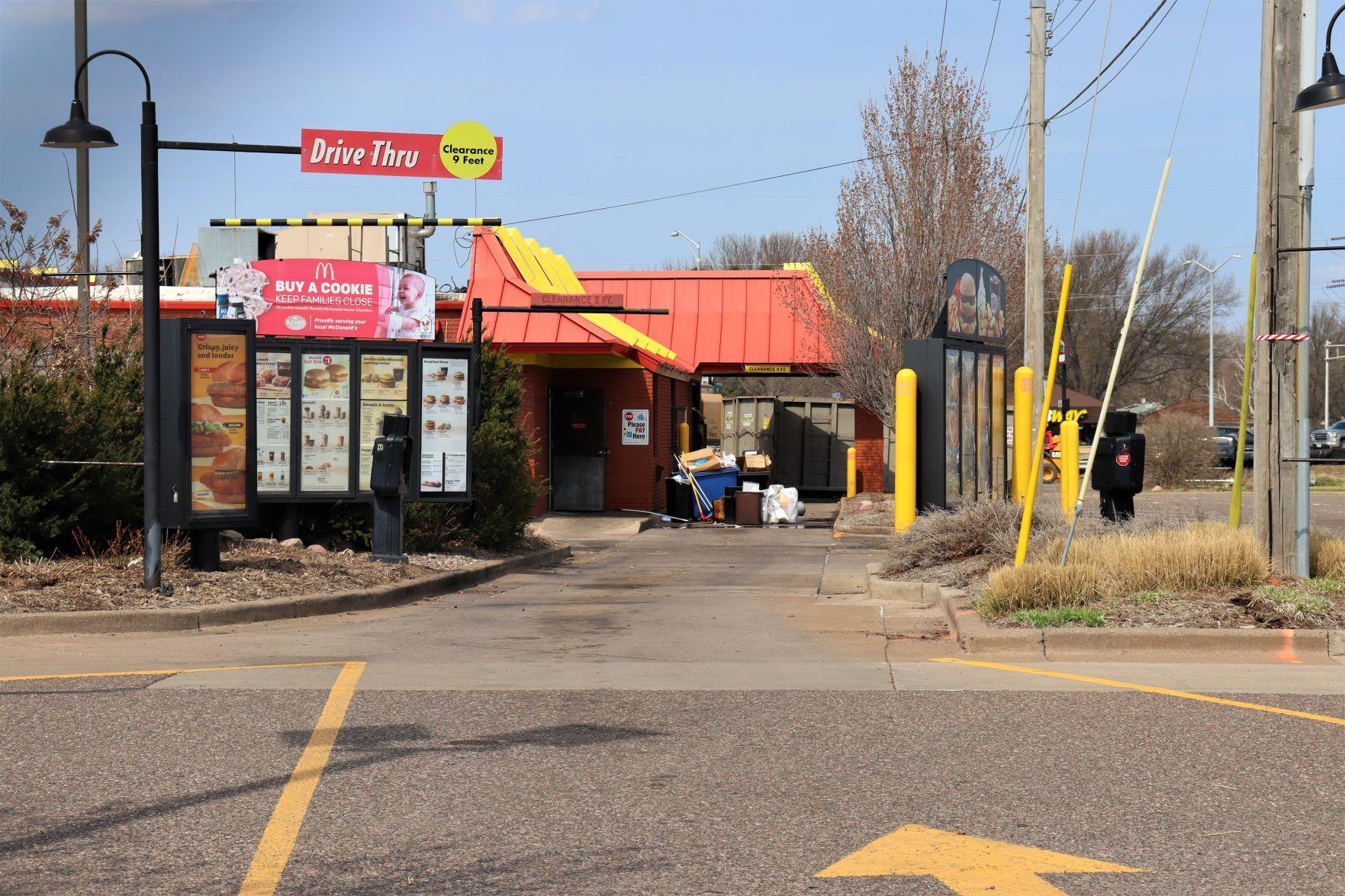 A popular local eatery is getting a tasty remodel.

McDonald’s in Chippewa Falls on 100 Prairie View Rd. began to suddenly be demolished on Tuesday afternoon. No notice was given to city residents prior, leading to much confusion among passersby, including Altoona resident Steven Towns, who was watching the demolition.

“At first I thought they had a fire or something,” Towns said. “I heard they were remodeling some locations, but I had no idea this place was going to be gone so soon. I eat here all the time and I was planning to for lunch today. I hope they don’t take a long time replacing it.” 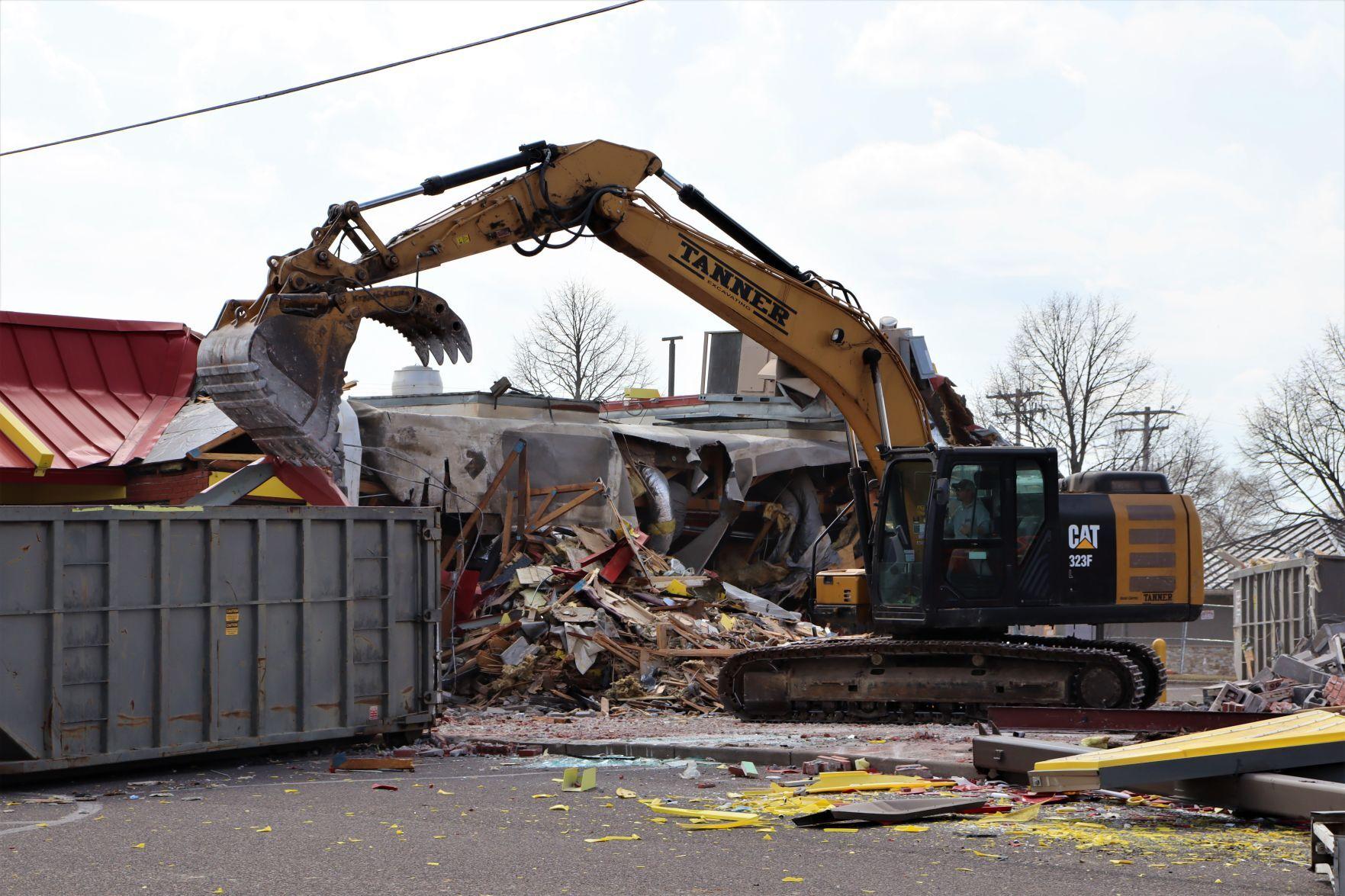 The McDonald's in Chippewa Falls located at 100 Prairie View Rd. was suddenly demolished on Monday, making way for an updated store to open later this year.

“I wish we would have known this place was going to be gone sooner,” Oldenburg said. “It’s annoying to suddenly drive by one random day and have it be gone. It doesn’t seem considerate, especially to other businesses nearby who have to deal with all the noise and disruption this will cause.”

There is currently no timetable for when the new McDonald’s location in Chippewa Falls will be open for business. 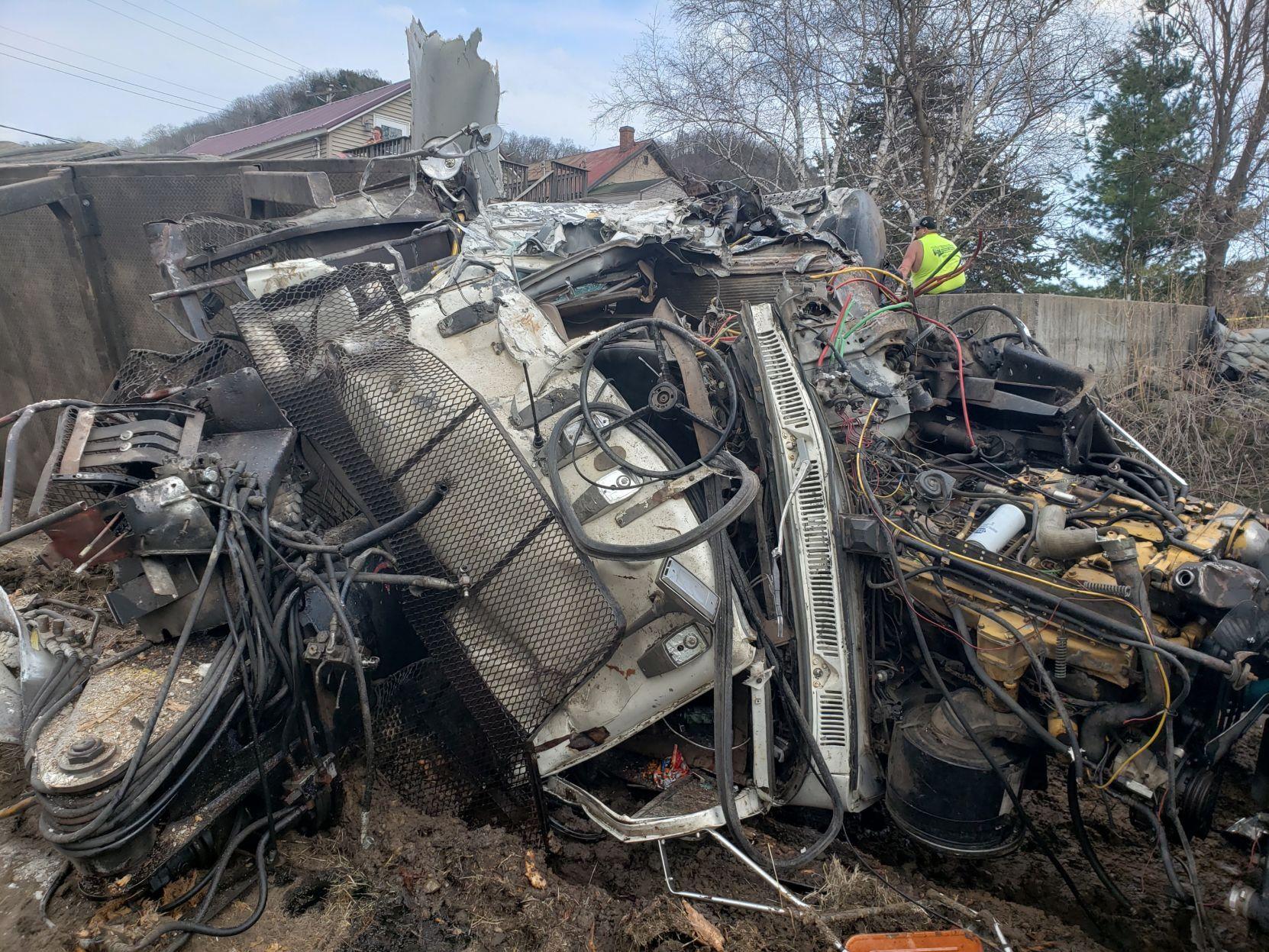 A crash in Fountain City Monday morning left both vehicles involved barely recognizable. Both drivers had to be extricated from their respective vehicles before being  taken to the hospital with serious to life-threatening injuries. 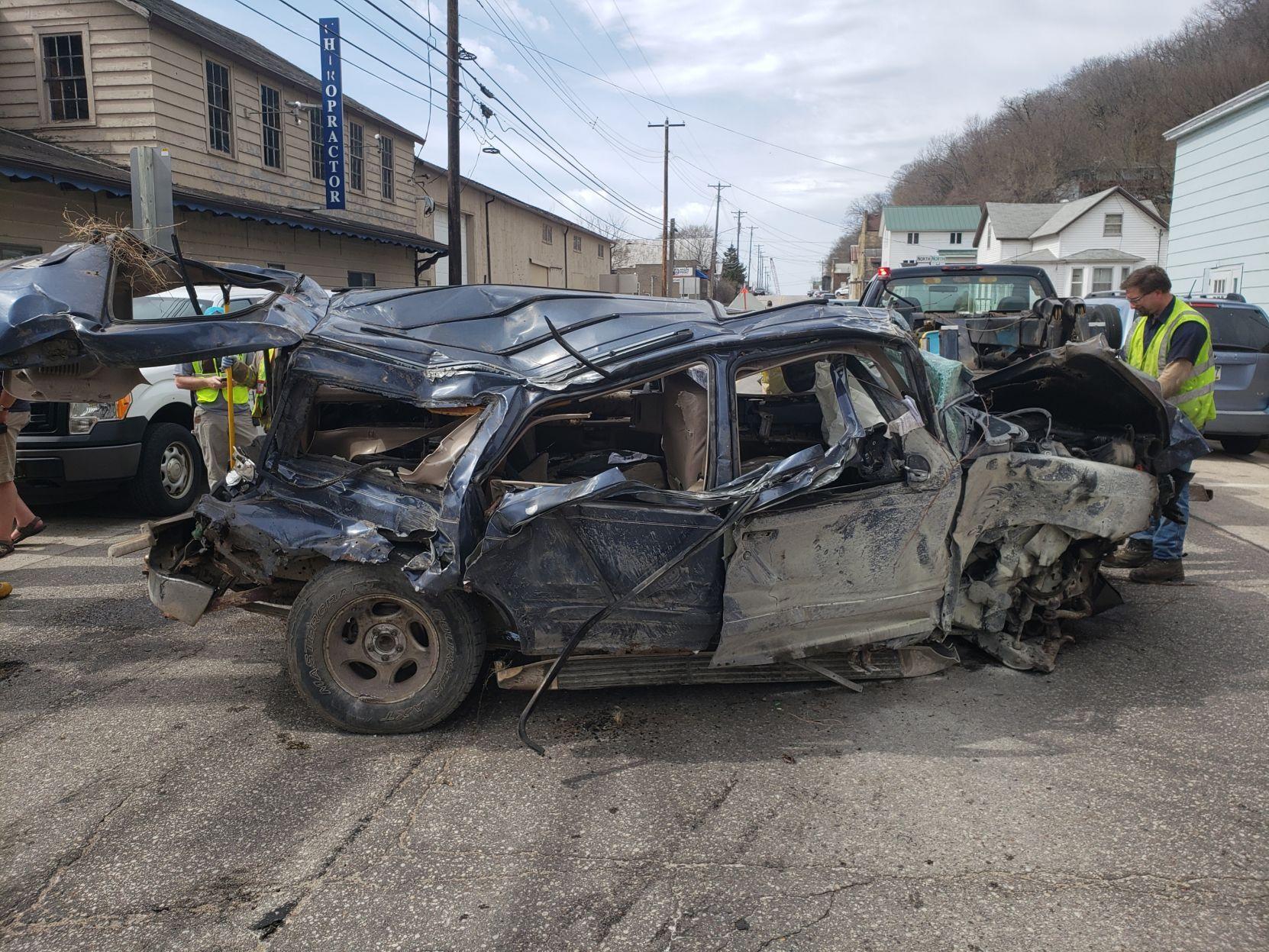 According to the Buffalo County Sheriff's Office, the driver of a 2000 Ford Explorer (pictured above) was traveling north on Hwy. 35 when a westbound 1987 Ford semi-truck traveling at a high rate of speed lost control and struck them. The driver of the Explorer sustained life-threatening injuries and was transferred to Gundersen Lutheran Medical Center. The driver of the semi sustained serious injuries and was also taken to Gundersen.

A car crash in Fountain City late Monday morning sent two people to the hospital with serious and life-threatening injuries and shut down a portion of Hwy. 35 for several hours.

According to a statement from the Buffalo County Sheriff’s Office, the crash occurred at the intersection of 35 and Hwy. 95 at around 11:15 a.m. when a log truck traveling west lost control, went through the intersection and collided with a vehicle traveling north.

The sheriff’s office gathered from witnesses in the area that the 1987 Ford semi-truck was seen traveling at a high rate of speed just before the crash.

Witnesses said the truck appeared unable to stop before striking the other vehicle—identified as a 2000 Ford Explorer—pushing it through a cement barrier and forcing it into a spillway where it got wedged on its side.

The semi—driven by a 57-year-old man from Durand, Wisconsin—was reported to have continued moving after striking the Explorer—driven by a 46-year-old woman from Buffalo City, Wisconsin—before going down a small embankment, which forced the truck on its side and become wedged under a Burlington Northern Santa Fe Railroad bridge, the sheriff’s office stated.

Both drivers had to be extricated from their vehicles, with the Buffalo City woman being taken by helicopter to Gundersen Lutheran Medical Center with life-threatening injuries and the Durand man being taken to Winona Health, and then subsequently transferred to Gundersen, with serious injuries.

As a result of the crash, portions of Hwy. 35 were shut down for several hours.

The crash remains under investigation by the Buffalo County Sheriff’s Office along with the Wisconsin State Patrol.

A Stanley man, who is incarcerated in the Chippewa County Jail, has been charged after he admitted he made up a story of being sexually assaulted by a woman.

Austin L. Engelke, 19, W11729 Willow Road, has been charged in Chippewa County Court with resisting or obstructing an officer. Engelke is already being held on a $1,000 cash bond. He will return to court today.

According to the criminal complaint, a Chippewa Falls police officer interviewed Engelke in the jail, where Engelke told a story of being sexually assaulted by an adult woman in March 2020. However, the officer “noted a bunch of inconsistencies” in Engelke’s statements. Eventually Engelke admitted he had not been assaulted.

“He lied about the sexual assault to help out another inmate, Donald Rusaw,” the complaint states. Engelke added, “that the person he claimed sexually assaulted him was a prior victim of Mr. Rusaw, and that Mr. Rusaw was going to use this information to help him with Mr. Rusaw’s case.”

The complaint doesn’t say if Rusaw explicitly asked Engelke to lie on his behalf.

Engelke was arrested after the parents of a 12-year-old girl saw Engelke climb out of her second-story bedroom window on Jan. 2. When confronted, Engelke admitted he had sexual conduct with the girl. If released from jail, Engelke cannot have any contact with the victim or any juvenile females.

Rusaw, 44, was released from prison Aug. 11 after serving an 18-year sentence on sex offenses, and was considered homeless. However, he was arrested after law enforcement discovered he was in possession of sexual images on his phone. He was charged with 10 counts of attempted possession of child pornography and is incarcerated on a $25,000 cash bond. He will be in court Wednesday in that case.

According to the criminal complaint, Rusaw met with his probation agent Aug. 31, where the agent discovered multiple images of adult and child pornography. His phone also showed searches for minors involved in sex acts. The phone was turned over to the Chippewa Falls Police Department and later sent to the state’s Division of Criminal Investigation for a forensic examination.

Rusaw was convicted by a jury in Chippewa County Court in 2004 of second-degree sexual assault of a child and 17 counts of possessing child pornography. He is considered a Level III sex offender, requiring notification of his release. Even before his most recent charge, Rusaw was slated to be supervised by the Department of Corrections through August 2058.

Here are tips to prevent your home from being broken into. Remember, if you observe a suspicious person or behavior, call 911.

How to prevent home break-ins