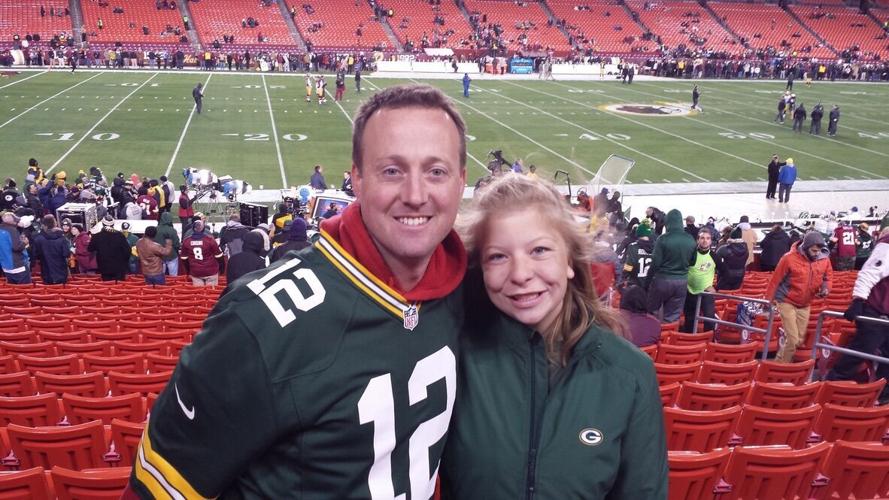 Trevor and Anna Linberg attended a game in Washington, D.C., in 2016. 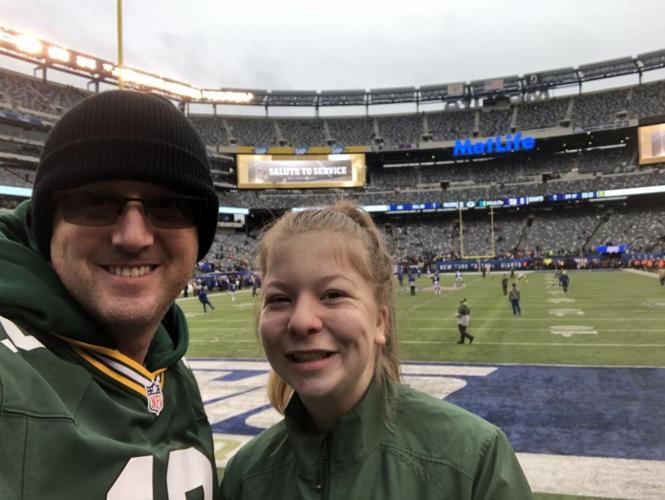 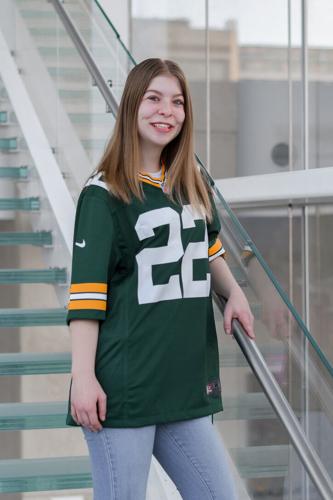 Anna Linberg is the Green Bay Packers Fan of the Year.

MADISON — Anna Linberg has pretty much always had a Green Bay Packers jersey in her closet. Or six or seven or eight. Green Bay gear has been a staple of the Linberg household for as long as she can remember.

Each NFL football team, including the Packers, selects their Fan of the Year based upon nominations on the their website. Anna was nominated by her dad back in August.

“I had to write a few paragraphs on why I thought she should be the Packer Fan of the Year,” said her dad, Trevor Linberg. “Honestly, I can’t remember exactly what I wrote. I thought the prize was a gift card for the Packer pro shop. Little did I know what it included.”

In the meantime Anna loves her studies at the University of Wisconsin. She’ll graduate a year early with a degree in Personal Finance and hopes to work in the financial services industry. She’s a big fan of her volunteer work too. But she also loves football — Green Bay Packers football to be precise.

She still makes time every week to travel from the Madison campus to be with her family so they can watch their beloved Packers together. Recently she’s been watching games with her mom and grandma, she said. And at least once a year the family goes to live games.

But it’s her dad who introduced her to the sport, and to the team. “The best team in the NFL,” according to the Linberg family — The Green Bay Packers.

“My dad is a huge football fan. And so that was kind of embedded into our family life, from a very young age,” Anna said. “Football has really brought us all together and allowed us to communicate better.”

Football has allowed the family to travel together, work together, see new places and just be a family, Anna said.

“It’s really helped us when life gets hard,” she said. “When you have a specific thing each week, like football games, and you have to do it, it becomes enjoyable. It’s something to look forward to now. Our family dynamic is a lot better because of it. So that’s one of the reasons why I love football. It’s made our relationship so much stronger.”

Now that she’s won the honor of Green Bay Packers Fan of the Year, she said she looks forward to taking her dad to the Super Bowl — as part of winning she gets two tickets to the big game. It’s all expenses paid, covering the flights, hotel and Super Bowl tickets.

Her father couldn’t be more appreciative.

“I am one proud dad, beyond this honor I am very proud of the young adult she has become,” said Trevor Linberg, Anna’s father. “The Packers have kind of been our family thing. So it’s really cool that she got this honor as well.”

Right now, Anna is profiled on the NFL website, her dad said. She’s been reported on by various TV stations and newspapers across the state. But he said the best part will be making the trip to the Super Bowl with his daughter representing Green Bay.

Anna said she appreciates Green Bay fans, especially when she compares them to San Diego fans, in the city where she grew up.

“Football wise, I think San Diego struggles with a loyal fan base. When we went to games it was not as packed as we see in Green Bay. Like the visiting team was always dominant in fans,” Anna said. “Wisconsin has such an amazing atmosphere, like tailgating wise, and going into the stadium. You just make friends with the people around you and even when we’re losing it’s just a really supportive environment.”

Anna said that’s one reason she’s happy to have transferred to the University of Wisconsin.

“I felt like something was missing in San Diego. But here it’s always nice to just be with people who are like-minded even if they’re strangers. We’re ready to celebrate together,” she said.

Fan of the Year

It was Anna’s dad, Trevor, who nominated her as Packers Fan of the Year. She wasn’t aware he had nominated her.

One of the things that sets Anna apart is her outreach work and her studies. Graduating early means she carries a heavy course load. Yet she still makes time to do a hefty amount of volunteer work. These accomplishments made her a great candidate for Fan of the Year.

Being a part of NJROTC Community Service Club opened her eyes to the importance of service. Giving back to the community is gratifying, she said.

“I was really involved in volunteering whenever I had the chance, and it made me, helped me, grow community that way,” she said. “We did a lot of work with little kids and just seeing their faces and making their day, really brought joy to me. That really ignited the switch in me to continue volunteering and helping, and doing things beyond just for yourself.”

As the president of the high school robotics teams, she made long-lasting relationships, many of which are still in place today.

She currently volunteers at the Food Recovery Network, which helps fight against food insecurities and food waste, and at the Habitat for Humanity UW-Madison chapter, which helps build affordable homes for residents through community outreach events and fundraising efforts.

Though Anna was born and raised in San Diego she has several local connections, especially in Elk Mound and Colfax.

Anna’s grandmother Joyce and great-grandmother, Marie Hayden, live in the Elk Mound area, along with several relatives on the Hayden, Price and Linberg sides of the family.

Now that Anna is living in Wisconsin, she’s much closer to her family, and her beloved Packers.

“I don’t have as much time to go to games as I’d like because of school and all my volunteer work but it’s nice to be in Packers land, finally,” she said.

Anna said she attended her first Packers game at the age of 9. But she’d been watching the team with her dad since she was in diapers.

They’ve tried to travel to at least one game each year since she was a kid.

According to the NFL website she and her family withstood a downpour in New York against the Giants and endured a bone-cutting windchill in Washington, D.C.

She and her dad celebrated the Rodgers-to-Rodgers Hail Mary on top of a sports bar’s table, paying no mind to how they may have embarrassed themselves.

She was bundled up for the freezing temperatures this last January at Lambeau Field against the Vikings and enjoyed the entire experience of attending one of the coldest games in Lambeau history, especially when AJ Dillon did the Lambeau Leap directly in front of their seats.

Anna said it has been a wonderful journey, from watching games at a beachfront bar in San Diego to enjoying the best fried cheese curds ever outside of Lambeau. She has traveled to various European countries and multiple NFL stadiums and the atmosphere and energy in Green Bay is like nowhere else.

“I’m just really grateful for the opportunities it’s bringing me, getting to meet the other Fans of the Year,” she said. “I’m just grateful that they chose me and believed in me. I won’t let you down Green Bay.”

Anna as a kid

Anna Linberg as a kid

Trevor and Anna Linberg in the snow

Head of the class: Chippewa Valley students get a jump on college

Samuel Scheidler of Cadott is getting hired for his first EMT job at the age of 18. He’s enrolled at Chippewa Valley Technical College and hop…

While La Crosse County is moving forward with a plan to make phone calls in the jail free to inmates, for the first 30 minutes each day, area leaders are skeptical of a similar plan here.

The 2022 Election is over. Wisconsin turns to redistricting (again)

In the recent midterm election, Democrats won three of five statewide races, including two of the three most important, governor and attorney …

A 33-year-old Menomonie man has been accused of injuring himself and the driver of another vehicle after a drunk driving crash Nov. 17 in La Crosse.

The Chippewa Falls Parks and Recreation Department hosted the 10th Annual “Run for the Lights” 5K Run/Walk and 1 Mile Walk on Saturday at Irvine Park.

Two women from Chippewa Falls have been globe-trotting, while making a difference, in rural South America, East Africa and North America. Kim Covill and her niece Maggie Covill decided more than a decade ago that they wanted to build little libraries in some of the poorest places on the planet. Now their organization, From Books to Brilliance (FBTB), has more than a dozen small, rural libraries up and running.

The Lake Hallie Village Board could be asking voters to support a referendum to pay for road repairs and pay off some growing debt.

Get ready for the Bridge to Wonderland Parade

The 2022 Bridge to Wonderland Parade and Christmas Party will take place at 6 p.m. Saturday in downtown Chippewa Falls.

A former Bloomer resident who was released from prison last year after serving a sentence for break-ins and sexual assault of a child has now been arrested on a possible charge of substantial battery.

France plans to ration power in case of shortages

Trevor and Anna Linberg attended a game in Washington, D.C., in 2016.

Anna Linberg is the Green Bay Packers Fan of the Year.