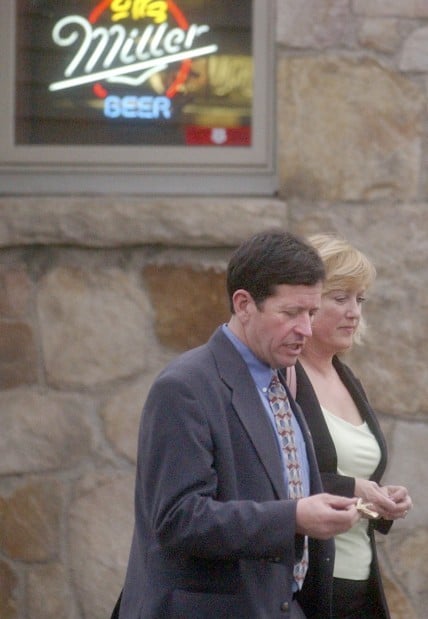 In this April 4, 2005 file photo, Wisconsin Sen. Russ Decker, D-Schofield, is accompanied by an unidentified woman as he leaves a fund-raiser at Treu's Tic Toc Club in Wausau, 6 days after his arrest on drunken driving charges. 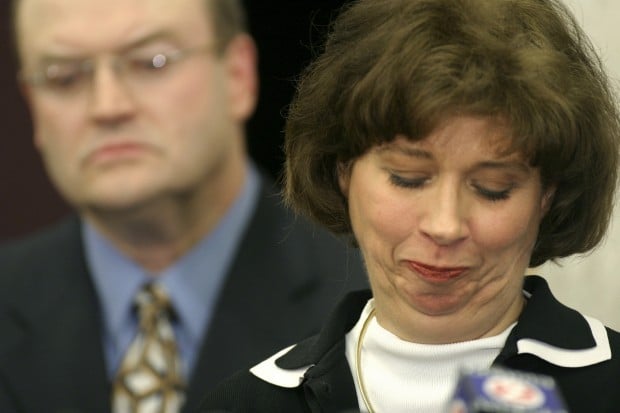 In this Feb. 26, 2004 file photo, Wisconsin Attorney General Peg Lautenschlager is accompanied by her husband William Rippl as she makes a statement in Madison, Wis., about charges of operating a vehicle while intoxicated.
By SCOTT BAUER Associated Press Writer

MADISON — Wisconsin is known historically as a hotbed of social reforms, yet cracking down on drunken drivers has never been high on policymakers’ to-do list.

Maybe that’s because so many have had to recite their ABCs on the side of the road.

Big breweries once dominated the state and ties to the beer industry remain stout, giving way to a belief that hard drinking is as much a part of the Wisconsin culture as the Green Bay Packers and cheese. That’s created a blind spot of sorts for the socially conscious state: drunken driving.

Wisconsin has long had the nation’s highest rates of drinking — and binge drinking — among adults and some of the most lax laws on drunken driving. There’s also a history of lawmakers who have been caught behind the wheel after having a few too many.

It’s a paradox for a state in which leaders pride themselves on being on the forefront of welfare programs, health care and workers’ rights.

The latest accused legislator is state Rep. Jeff Wood, who was charged with driving under the influence three times over a 10-month period. He has pleaded not guilty and appears poised to serve out his term with only a ceremonial slap on the wrist.

“Jeff Wood is a perfect example of protecting their own,’’ said Judy Jenkins, whose pregnant daughter and 10-year-old granddaughter were killed by a drugged driver. “I would be surprised if they (legislators) kicked him out. He’s part of the culture.’’

For decades, lawmakers got busted for boozing and driving and never faced any repercussions from their colleagues.

In fact, that’s the crux of Wood’s defense and he lists drunken driving arrests of state Assembly members dating back to the Ozzie and Harriet era of the 1950s.

Among them is a drunken Republican state representative who blew through a stop sign, initially ignored the squad cars behind her — flashing lights and all — and became belligerent with officers during the arrest.

Wood’s defense strategy leaves out other notable instances. For example, the 2005 arrest of Democratic Sen. Russ Decker, who was pulled over shortly after leaving a reception near the Capitol. He lost his driver’s license for six months but later rose to become Senate majority leader.

There also was the notorious 2004 arrest of then-Attorney General Peg Lautenschlager. She drove her state-owned Buick into a ditch and had a blood alcohol content of 0.12 percent, well above the state’s 0.08 legal limit. Voters ended her political career two years later.

Much of Wisconsin’s love of beer is based in its roots.

Its taste for barley and hops can be traced to German settlers who opened the first breweries and saw their numbers grow to roughly 400 by the late 1800s. And some of America’s largest brewers — Miller, Pabst, Schlitz, Blatz — once called Milwaukee home.

Nearly one in four Wisconsin residents age 18 to 44 had four or more drinks in one sitting at least once within a month’s time in 2008 — the latest year available — topping all other states, according to the Centers for Disease Control and Prevention.

And a 2008 U.S. Department of Health and Human Services report showed 15.1 percent of the country’s drivers age 18 and older drove under the influence of alcohol at least once in the past year. Wisconsin drivers led the nation at 26.4 percent. Utah was the lowest at 9.5 percent.

Lawmakers have been slow to strengthen drinking laws, partly out of fear the penalties one day may apply to them, said Lee, who was in the Legislature for 13 years.

Wisconsin is the only state where the first drunken driving offense is a traffic violation and not a crime. It also was one of the last to lower the legal blood alcohol limit from 0.10 to 0.08. And though Wisconsin’s legal drinking age is 21, it’s also legal for a child to drink alcohol if they are with a parent at a tavern.

But late last year legislators toughened drunken driving penalties after public outcry over the state’s lax laws. The changes included making the fourth drunken driving offense a felony and the first offense a misdemeanor if someone under age 16 is in the car.

Jenkins has pushed for strengthening laws since that driver slammed into her daughter’s car two years ago and said more needs to be done.

“I think things slowly but surely will change and that’s our hope,’’ Jenkins said, “but I would like to see it change more quickly before more people get killed.’’

In this April 4, 2005 file photo, Wisconsin Sen. Russ Decker, D-Schofield, is accompanied by an unidentified woman as he leaves a fund-raiser at Treu's Tic Toc Club in Wausau, 6 days after his arrest on drunken driving charges.

In this Feb. 26, 2004 file photo, Wisconsin Attorney General Peg Lautenschlager is accompanied by her husband William Rippl as she makes a statement in Madison, Wis., about charges of operating a vehicle while intoxicated.
© Copyright 2021 Lee Enterprises, 321 Frenette Drive; P.O Box 69 Chippewa Falls,WI | Terms of Use | Privacy Policy | Do Not Sell My Info
Powered by BLOX Content Management System from TownNews.com.
You don't have any notifications.