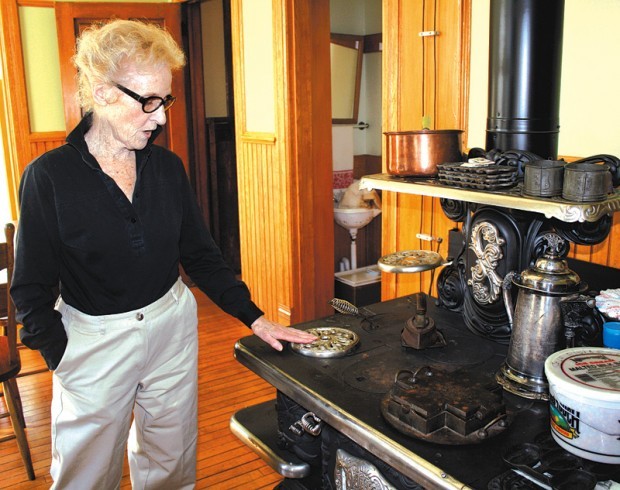 D'Mitria Gray shows the wood burning stove at the Cook Rutledge Mansion in Chippewa Falls. She has been the caretaker at the mansion for the past 12 years. Photo by Rod Stetzer 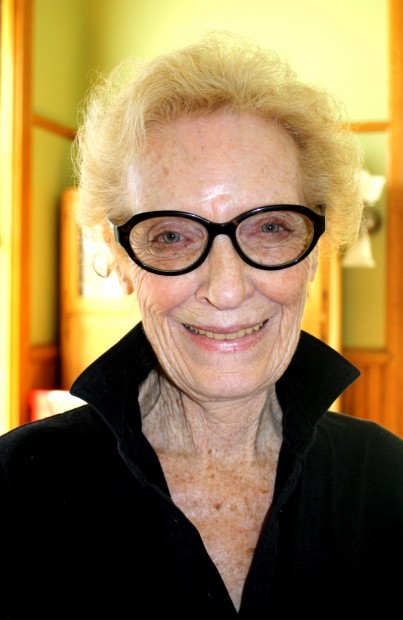 For 12 years, D’Mitria Gray has lived on the grounds of a mansion. She loved showing hundreds, if not thousands, of visitors a glimpse of the luxurious life of 19th Century lumber barons.

But today she is scheduled to leave the luxury behind and move to a place that reminds her of her native West Virginia.

The house is the Cook Rutledge Mansion at 505 W. Grand Ave., a place that reminds today’s generation of Chippewa Falls’ rich logging past.

As much as she loves the mansion and her adopted hometown, the 82-year-old is ready for the change.  “I can do a lot, but there are some things I don’t want to do,” she said.

So she is moving to La Crosse to live with her daughter, April. The hills of the Coulee Region remind her of where she was born, in Morgantown, W. Va.

“My mother was reading a Russian novel before I was born,” she said. That’s why she was given her distinctive first name.

Her family fought for both North and South in the Civil War. That’s perhaps one reason why she has a passion for history.

She has enjoyed a varied life, working for a time as model and in advertising. She appeared on radio and also on a local TV show in West Virginia every Saturday night when television was a new medium. She said the TV show featured the day’s musical acts, including Bobby Darin, who would sing to a recording and talk with co-host Bob Close about their latest records.

She lived in Massachusetts and Tennessee before moving to the Chippewa Valley with her late husband, Earl, who went on to be an assistant to the president of Presto Industries in Eau Claire.

Together they had two children: daughter April in La Crosse and son Michael, who lives in Oklahoma. They lived in a house on Lake Wissota.

After her husband’s death, she entertained thoughts of moving back East. Instead, she moved to Chippewa Falls, and loved it.

She worked at the Chippewa Falls Public Library for nine years and fell in love with the work.

“I love the English language and I love the written language,” she said.

She rented an residence in Chippewa Falls owned by noted local artist Hugh Mandelert. That’s appropriate, because Gray has a masters in fine arts and paints both watercolors and oils.

Years earlier she had talked with Barbara Ray, who has served as chairwoman of the mansion.

When Mandelert became ill, Gray thought it would be a good time to look for a new place to live. So she called Ray, who had an opening for a caretaker at the mansion.

Gray has delighted in giving tours of the place to large groups visiting the city, wedding parties, and large gatherings.

“It’s a constant meeting of new people. And they don’t stay for coffee and cake,” she said, joking she rather enjoyed that.

During the summer she would give tours four days a week, along with taking care of the mansion.

One of her favorite tour groups are the busloads of fourth graders who typically tour the mansion in May.

“They’re fascinated by the telephone,” she said, pointing to a crank phone mounted to a wall.

Usually, a brave boy in the group would say he would know what the warming oven was in the mansion’s kitchen. “That’s an old microwave,” was a typical guess.

“I think they’re kind of overwhelmed,” she said of children going through the 19th Century mansion. “They have no conception of gas lamps.”

Gray said she’s looking forward to living in La Crosse, which has three libraries and is a great place to indulge herself in one of her pastimes, walking.

Her caretaking duties at the mansion will be taken over by Melanie Berg.

Gray said she will miss Chippewa Falls and it’s evident that people here will miss her, too. A farewell party for her on Sept. 8 drew about 80 people.

Living here has been rewarding, she said.

“I leave Chippewa Falls with a great deal of love and affection. It’s been good,” she said.

A Chippewa Falls man accused of leading area police on several high-speed chases this summer was convicted of multiple offenses Monday. He was…

Lydia Fish has always been a great athlete. She competed in gymnastics and running events when she was younger, and two years ago, started Cro…

Chippewa County Sheriff Jim Kowalczyk isn’t ready to give up his job. He says he is still having too much fun.

Being recognized isn’t one of Rusty Volk’s goals in putting together the largest gathering in Chippewa Falls annually, but sometimes it is overdue.

A staple of Chippewa Falls is celebrating an important milestone.

Staffing shortages are continuing to impact Chippewa County schools, this time resulting in the cancellation of classes altogether.

Chippewa Herald, April 17, 1953The Leinenkugel bowling team is currently holding the title in two leagues, having grabbed the 1953 honors in t…

Construction on a high-anticipated local park improvement is now complete and open to the public.

Two injured in near fatal crash in the township of Wheaton

On Monday at 3 p.m. in the township of Wheaton, the Chippewa County Sheriff’s Office received a report of a two-vehicle crash with injuries an…

D'Mitria Gray shows the wood burning stove at the Cook Rutledge Mansion in Chippewa Falls. She has been the caretaker at the mansion for the past 12 years. Photo by Rod Stetzer