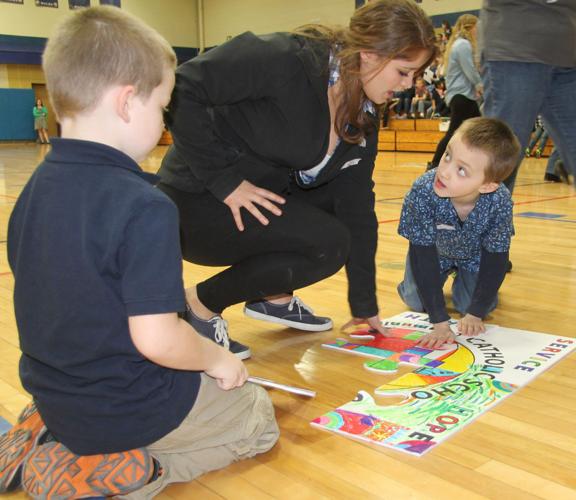 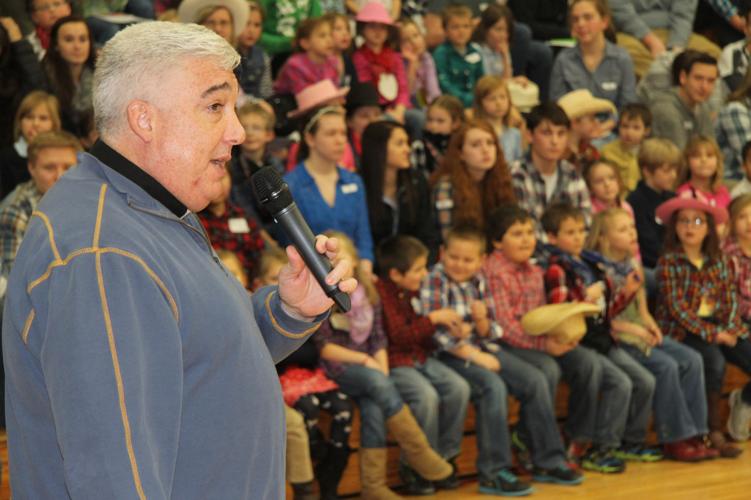 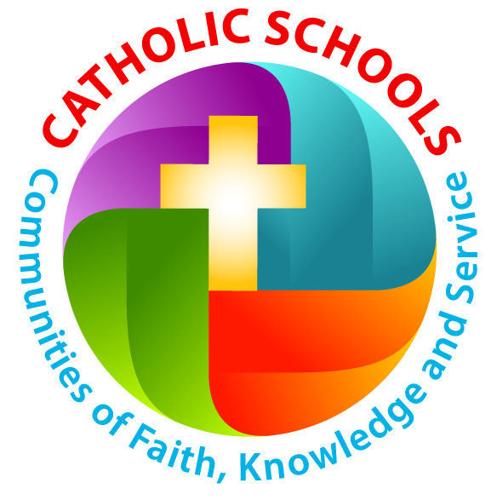 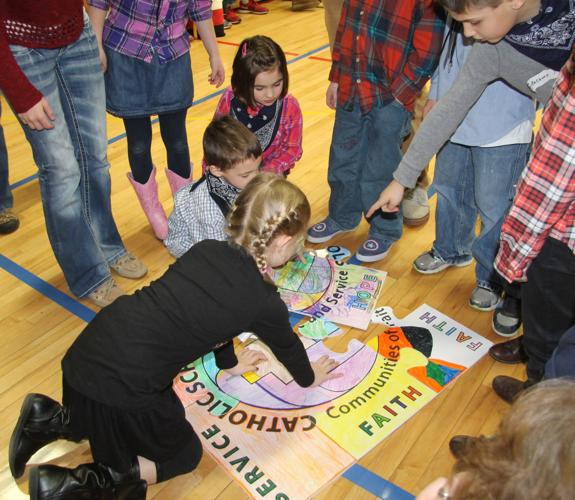 Students try to make the pieces to a puzzle fit Tuesday at McDonell Central High School. 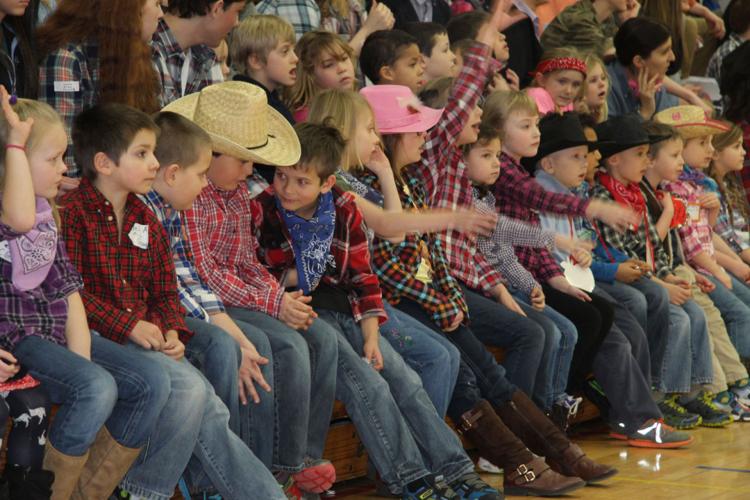 Students assemble in the gymnasium at McDonell High School Tuesday, wearing clothes with a Western theme that was used as part of the school rally. 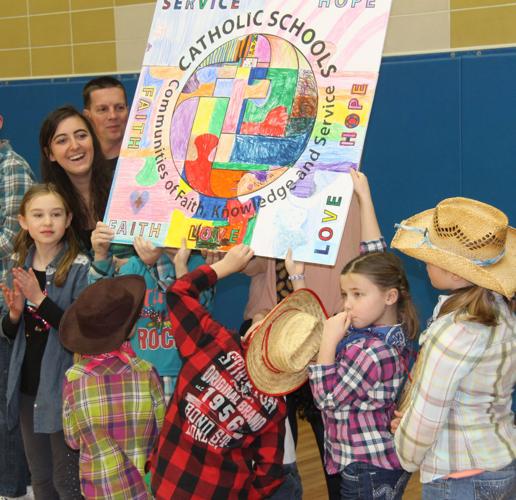 One of the seven completed puzzles is held aloft Tuesday, displaying love, faith, hope and service. Each school will receive a puzzle to display. 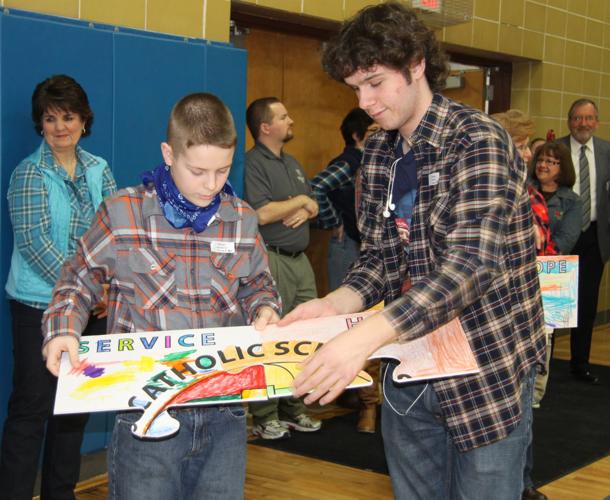 Students work to connect the pieces together of a puzzle celebrating Catholic Schools Week.

They say there is strength in numbers, and Tuesday morning at McDonell Central High School, that strength was measured in numbers.

Sophia Kinlen is one of 14 students in her fifth-grade class at Holy Ghost Elementary School. So when she walked into McDonell and saw nearly 700 students, it was quite a surprise.

Believers of all sizes and ages — the vast majority teenagers and younger from all parts of Chippewa County — were charging around the school, showing their enthusiasm for a rally in a variety of ways as part of National Catholic Schools Week.

It was the first time all of the students from the county's Catholic schools in Tilden, Bloomer, Boyd and Chippewa Falls, as well as Thorp, had gotten together since Bishop William P. Callahan held Mass here in 2012.

That enthusiasm was immediately visible, and it was contagious.

"It grows that fire inside of me, to evangelize and share my faith outside of school," McDonell senior Abby Selzler said of the gathering.

"It's really cool they get to unify all the schools for one big event," said Braedon Hoechal, an eighth grader at St. Paul's in Bloomer. "It strengthens my relationship with God."

Courtney Frankewicz, the only girl and one of only three eighth-grade students at Thorp Catholic School, welcomed the opportunity to feel a part of something bigger.

"It's amazing to see different personalities — I'm not the only one who sees the same things other people do," she said of her faith.

Someone who was particularly pleased to see that happen was Rev. Msgr. Mark Pierce, pastor at the Church of Notre Dame and dean of the McDonell Area Catholic Schools. He said these gatherings help break down an us-against-them mentality that existed at one time with parish schools.

Jeff Heinzen, who is in his first year as president of the McDonell school system, said the reality with rural schools is the bigger picture can be obscured. That is why getting everyone together is important.

"We are vibrant, we are alive, and the communities count on us at the end of the day," he said.

McDonell's principal, Brother Roger Betzold, said the rally showed how many people believe in the same principals and values.

"We need to do that," he said. "We don't do it enough, in the community and in the schools. We are a little different than the school across the street (the city's public high school) and that's OK."

Selzler, who was a group leader Tuesday, elaborated on those differences, saying she gets a sense of family and unity from her Catholic education.

"We have the same values and morals, and with that we're able to understand each other better, and have the same growth in God," she said of her fellow students.

"It's not just an individual growth, but a community growth," said Selzler, who has attended Catholic school since she was in sixth grade.

"It helps us understand the world by knowing God, and it helps us become better people," said Isabelle Keck, a fourth-grade student at St. Joseph's Elementary in Boyd.

"You learn about all of your subjects, but also about God, and how to treat everybody nicely, and it's easy to get one-on-one time with your teacher," said Frankewicz.

There was another fringe benefit that has been pointed out to her by her friends who attend public schools. "They always are jealous because we get homemade meals," she said.

Several events are still planned as part of Catholic Schools Week, which kicked off with the play "Peter Pan" and an athletic booster club brunch this past weekend.

All of the McDonell system schools have Mass scheduled Wednesday, with an enrollment session for current and new K-12 students from 5:30-7 p.m. Wednesday.

At Tuesday's rally, students were learning how to line dance, and they are all invited to participate during halftime of the Macks' varsity basketball games Thursday and Friday nights.

St. Charles will host a dance Thursday from 5-7 p.m., and various activities are planned for Friday.

"We are vibrant, we are alive, and the communities count on us at the end of the day."

The Eau Claire Police Department has been notified Sex Offender Joshua J. Weichert, 27, will be released from prison on June 28.

On Thursday at approximately 11:03 am, the Eau Claire County Sheriff’s Office was notified of a deceased individual that had been located in t…

A chaotic Kenosha County Board of Supervisors meeting adjourned after a Kenosha man was arrested during public comments Tuesday night.

The Supreme Court of the United States on Friday issued a ruling that strikes down the landmark case Roe v. Wade, which has federally protecte…

Thousands of Wisconsinites put a little yeehaw in their step at the 2022 Stanley Rodeo this weekend.

WATCH NOW: Classic cars are the stars of the Great Race

More than 50 bands performing on five stages should provide endless entertainment to the 100,000 attendees of Country Fest in Cadott this week…

Biden's Mission In Europe: Shore Up Alliance Against Russia

Biden's Mission In Europe: Shore Up Alliance Against Russia

Students try to make the pieces to a puzzle fit Tuesday at McDonell Central High School.

Students assemble in the gymnasium at McDonell High School Tuesday, wearing clothes with a Western theme that was used as part of the school rally.

One of the seven completed puzzles is held aloft Tuesday, displaying love, faith, hope and service. Each school will receive a puzzle to display.

Students work to connect the pieces together of a puzzle celebrating Catholic Schools Week. 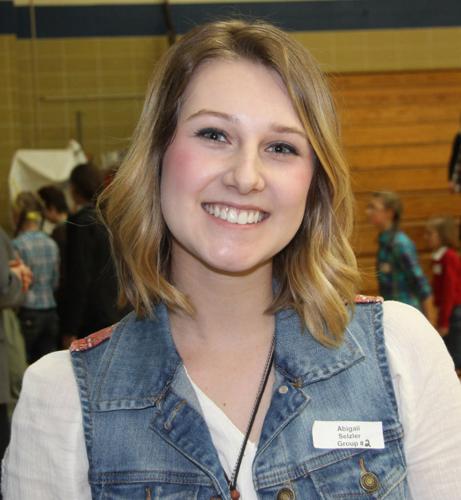 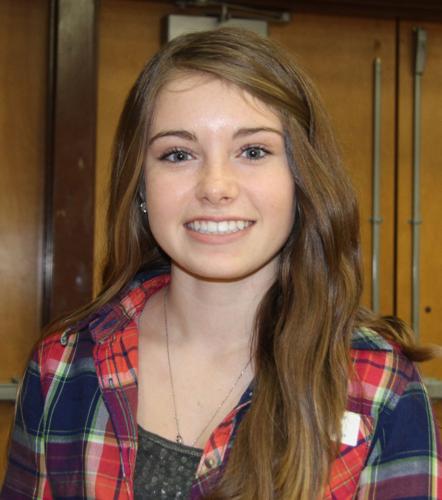