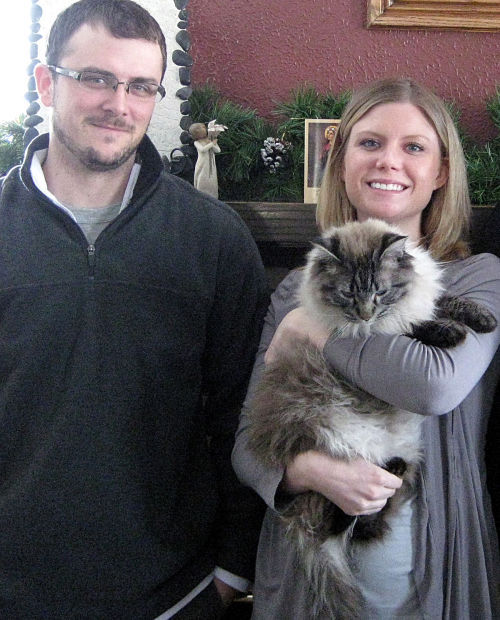 Daniel and Jillian Wollmer hold their 6-year-old cat, Ely, in this undated photo. Ely was killed by two dogs Wollmer identified as pit bulls on March 29 outside the family’s home on West Central Street in Chippewa Falls. 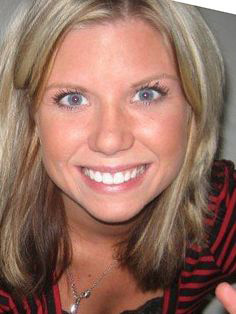 Does the city have a vicious dog problem? That’s the question Chippewa Falls City Committee 3 will discuss at an upcoming meeting.

“We haven’t set a date yet, but we’ll certainly do something (on) vicious dogs,” said Council Member Bill Hicks, vice chair of Committee 3, which deals with public safety issues.

The conversation has been initiated by resident Jillian Wollmer. She told the City Council Tuesday night that on March 29 her husband was chased into a vehicle by a dog she identified as a pit bull, before it and another pit bull mutilated the family’s cat, Ely, in her yard. Ely had accidentally been let out into the yard earlier by Wollmer’s 21-month-old son, who Wollmer said was fortunately inside the residence at the time of the attack.

The dogs ran off after police officers arrived at the West Central Street residence.

“As of now, the police haven’t found the dogs,” Wollmer said Wednesday. “They’re still out there, and no one knows if they’ve had any aggressive incidents prior.”

Hicks said the topics Committee 3 will consider include whether a city ban on pit bulls would be a good option.

“There will be serious discussion about a ban. The way (Wollmer) described her story, it could’ve been her child hurt or killed,” Hicks said. “Do we have to wait before someone is seriously injured first before considering this?”

Hicks said the decision would not be taken lightly by the committee, and he would like to get statistics about attacks from the Chippewa Falls Police to see if a ban would be the best course.

“We want to look at the numbers and be rational. We won’t rush anything based on emotion,” he said.

Other options for the committee could include raising fines for running at large or vicious animal citations.

Chippewa Falls Police records between April 2010 and April 2013 show that police were dispatched for 67 animal bite calls, though the department is still working to separate how many bites were by dogs and what breeds were involved.

“Anytime an animal has attacked or indicated it will attack another animal or a human we take that very seriously,” police Chief Wendy Stelter said. “If there’s a dog running at large or not licensed, we enforce that very strictly.”

Along with a ban against pit bulls, Stelter suggested the committee could also consider requiring pit bull owners to have proof of liability insurance, requiring a fenced-in yard, and increasing fines for dogs running at large.

This isn’t the first time city leaders have mulled a ban on pit bulls. The topic had come up as the city was dealing with two attacks, one on a woman and her granddaughter, the other on a woman walking a dog, by a vicious dog initially identified as a pit bull. The injuries in both cases were minor, though the dog “Shay” was deemed to have vicious tendencies.

Shay was later determined to be an American bulldog, not a pit bull, and was euthanized last March after the city obtained a court order.

Hicks understands there will be counter-arguments to a pit bull ban, with opponents stating that irresponsible owners are to blame for making a dog dangerous, not a specific breed.

“I have no problem with people blaming owners. I’m not saying every pit bull is bad, but when you read about severe attacks that breed is usually involved,” he said.

Both Hicks and City Attorney Robert Ferg said one question that will need to be answered is how a city ban on pit bulls would affect people who currently own a pit bull within city limits and do not have any issues with their dog.

“That is an issue that will have to be reviewed and thoroughly discussed,” Ferg said, adding that other municipalities have adopted pit bull bans.

Ferg said the city’s ordinance against dogs running at large is a common citation, though the vicious dog citation applies to more serious incidents that involve injury or potential harm.

“The police are pretty good about when it’s a plain case of an animal running loose by accident and try to give a warning, but when there are repeat cases (of a dog running around) they will get cited,” Ferg said.

By state law, Ferg said a municipality can petition for a court order to humanely euthanize a dog after being involved in two substantial incidents, like the city did with Shay.

Wollmer said Wednesday she liked the idea of a pit bull ban and increased fines for dogs running at large, and she’d also like to see a better way to keep track of certain dog breeds in the city to help police looking into attacks.

“I can understand both sides (of the pit bull argument) but I think safety comes first,” she said.

(Editor's note: The comments on this article have been disabled because of the number of offensive comments being posted, violating our commenting guidelines.)

Chippewa Falls will not enact a ban on pit bulls — or any other specific type of dog.

Jillian Wollmer had a disturbing story to share Tuesday night with the Chippewa Falls City Council.

Daniel and Jillian Wollmer hold their 6-year-old cat, Ely, in this undated photo. Ely was killed by two dogs Wollmer identified as pit bulls on March 29 outside the family’s home on West Central Street in Chippewa Falls.