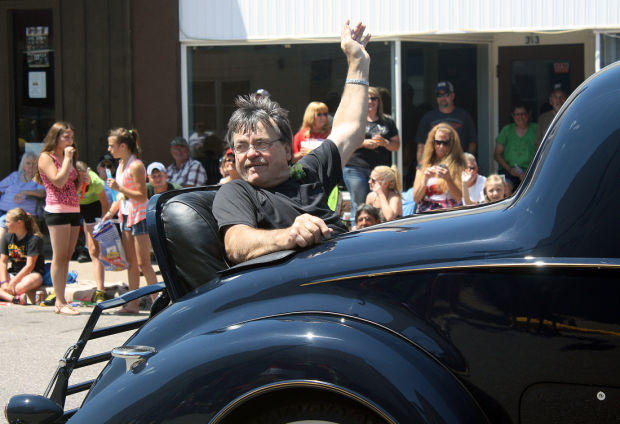 Huntz Geissler, the grand marshal of the 2014 Nabor Days parade, waves to spectators lining the streets in downtown Cadott Sunday. 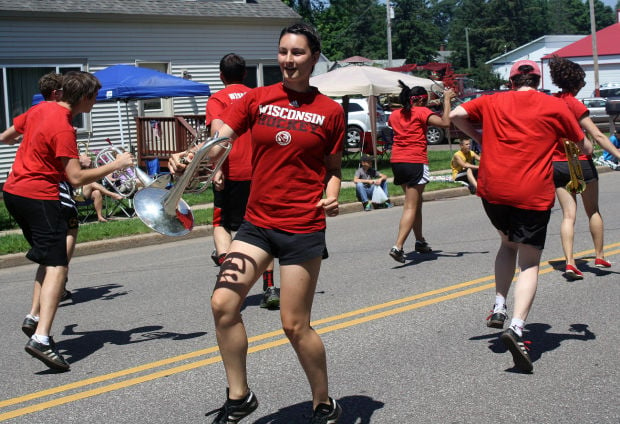 Members of the University of Wisconsin marching band dance during a break in a song during the 60th annual Nabor Days parade in Cadott Sunday afternoon. 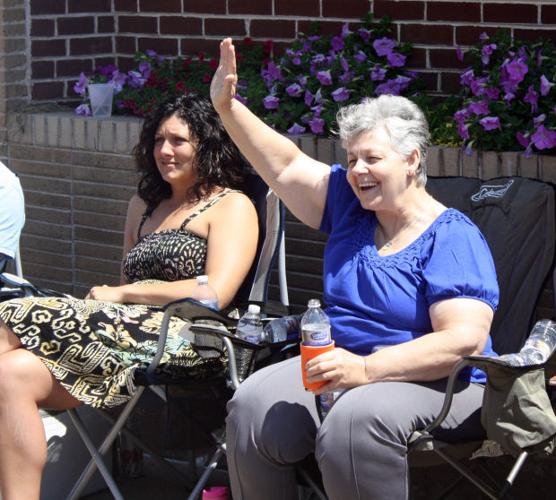 Mary Kasper of Cadott gives a friendly greeting to a parade unit Sunday during the 60th annual Nabor Days celebration in Cadott.

All day this past Monday, the nurses and doctors at Mayo Clinic Health System in Eau Claire kept asking Huntz Geissler for his birthdate. And he kept telling them that today was his 63rd birthday.

“Some birthday — in critical care,” he said.

Geissler was there because he suffered a heart attack the previous night at his Cadott home.

But things got better in a hurry for Geissler, who recovered quickly. He was initially told he would be hospitalized for 3-6 days, but was discharged after two. That was particularly important since Cadott’s big summer celebration, Nabor Days, was about to start and Geissler has played a major role in it for years.

His recovery was boosted by some other news he received in the hospital. It came in the form of a visit from Joyce Evjen, Karen and Dennis Lotts, and Theresa Pries. They were representing the Cadott Chamber of Commerce, and asked Geissler to be the grand marshal of the 60th Nabor Days celebration.

“It was unbelievable,” he said Sunday afternoon following the parade. “It’s a giant honor.”

Geissler might have been the only one who was surprised. He’s been chamber president for the past 16 years, and he’s done everything from line up the carnival and the Sunday night fireworks to make sure there are enough bartenders and enough beer. And he’s been a volunteer fireman besides.

He’s had his finger in the pulse of so many things that with Nabor Days just days away and Geissler lying flat on his back, his phone started ringing constantly.

“I got calls many times in the hospital — ‘Huntz, what do you need done?’ That was awesome.”

What was hard for Geissler was having to rest while there was so much to do. “I hated sitting there at home and not being able to do anything. I wanted to be there and I couldn’t,” he said.

But he was there Sunday, riding in the back of a 1935 Packard coupe, waving to people he had known nearly his entire life.

“When they came to get me in that ‘35 Packard ... in my wildest dreams I couldn’t have imagined that,” Geissler said. “I would have rode in that sucker all day long.”

The collector’s item is one of only a handful or two of that type in the country, he said. “Gator” helped the owner rebuild it, and the car only made its parade debut the week before at Bean & Bacon Days in Augusta. It wasn’t supposed to be in Cadott Sunday, but Gator asked the owner if he could take it because a special friend was going to be grand marshal.

That was quite the upgrade from the typical horse-and-carriage that does the honors. And it was one of the most memorable days for someone who was born on the corner of Mansfield and Terrill streets in Chippewa Falls on July 7, 1951.

His parents raised a big family, and moved to a farm west of Chippewa. “They had 13 cows and 13 kids,” Huntz says of seven brothers and five sisters.

In the early 1960s they sold their farm and went into the tavern business. They moved to the Frog Hop Tavern between Cadott and the town of Lafayette, and also operated Rainbow Gardens north of Cadott, Chipota in Jim Falls and the Silver Dollar north of Jim Falls on Hwy. 178.

His first name is Leonard, but hardly anyone knows that except for family and some good friends. “Even a lot of my friends don’t know that,” he said, explaining that his high school teachers referred to him as Huntz. (He thinks the nickname was the result of a babysitter named Huntz Snyder.)

“Then at graduation they called my name, Leonard Geissler, and everyone said, ‘Who the hell is that? Is that a new kid?’”

He has done construction work in Cadott ever since, operating Cadott Home Improvement since the early ‘80s. He’s installed siding, windows and doors for homes all over the area, and even built a half-dozen himself, including one he’s currently working on for one of his four daughters in Grand Marais, Minnesota.

Then last Sunday, the night before he turned 63, he went to bed and began feeling really warm, and started sweating profusely. “I had no pain at all, no shortage of breath,” he said. "But I looked like I'd just come out of the shower." A few minutes on the deck didn’t help, and before he knew it, he was passing out and his girlfriend, Joyce Evjen, was calling for help.

Hard to believe that just seven days later he was in the hot seat as the grand marshal. Did anyone tell him how lucky he was?

“Quite a few people have," he said. "My wife passed away 6½ years ago this month. She was watching me ... telling me that I don’t need you up here yet.”

He starts rehab from the heart attack Monday at St. Joseph’s Hospital in Chippewa Falls. Might he take it as a sign to slow down now?

Geissler thought about the question for a couple seconds and shrugged it off. Not a chance. He’s not ready for retirement, and he enjoys every part of his life too much. And that includes being in charge of the chamber.

“I’ll gladly give it up, but I don’t think anybody wants the job,” he joked.

Besides, he has that house in Grand Marais to finish building.

Head of the class: Chippewa Valley students get a jump on college

Samuel Scheidler of Cadott is getting hired for his first EMT job at the age of 18. He’s enrolled at Chippewa Valley Technical College and hop…

While La Crosse County is moving forward with a plan to make phone calls in the jail free to inmates, for the first 30 minutes each day, area leaders are skeptical of a similar plan here.

The 2022 Election is over. Wisconsin turns to redistricting (again)

In the recent midterm election, Democrats won three of five statewide races, including two of the three most important, governor and attorney …

A 33-year-old Menomonie man has been accused of injuring himself and the driver of another vehicle after a drunk driving crash Nov. 17 in La Crosse.

Get ready for the Bridge to Wonderland Parade

The 2022 Bridge to Wonderland Parade and Christmas Party will take place at 6 p.m. Saturday in downtown Chippewa Falls.

The Chippewa Falls Parks and Recreation Department hosted the 10th Annual “Run for the Lights” 5K Run/Walk and 1 Mile Walk on Saturday at Irvine Park.

A pastor associate of Dane County sister parishes has been arrested on child sex charges, according to Dane County Jail records.

Two women from Chippewa Falls have been globe-trotting, while making a difference, in rural South America, East Africa and North America. Kim Covill and her niece Maggie Covill decided more than a decade ago that they wanted to build little libraries in some of the poorest places on the planet. Now their organization, From Books to Brilliance (FBTB), has more than a dozen small, rural libraries up and running.

The Lake Hallie Village Board could be asking voters to support a referendum to pay for road repairs and pay off some growing debt.

Behind the Headlines: Investigating the Catholic Diocese of Buffalo

AIDS in Kenya: Homabay County, where fish are traded for sex

AIDS in Kenya: Homabay County, where fish are traded for sex

Huntz Geissler, the grand marshal of the 2014 Nabor Days parade, waves to spectators lining the streets in downtown Cadott Sunday.

Members of the University of Wisconsin marching band dance during a break in a song during the 60th annual Nabor Days parade in Cadott Sunday afternoon.

Mary Kasper of Cadott gives a friendly greeting to a parade unit Sunday during the 60th annual Nabor Days celebration in Cadott.