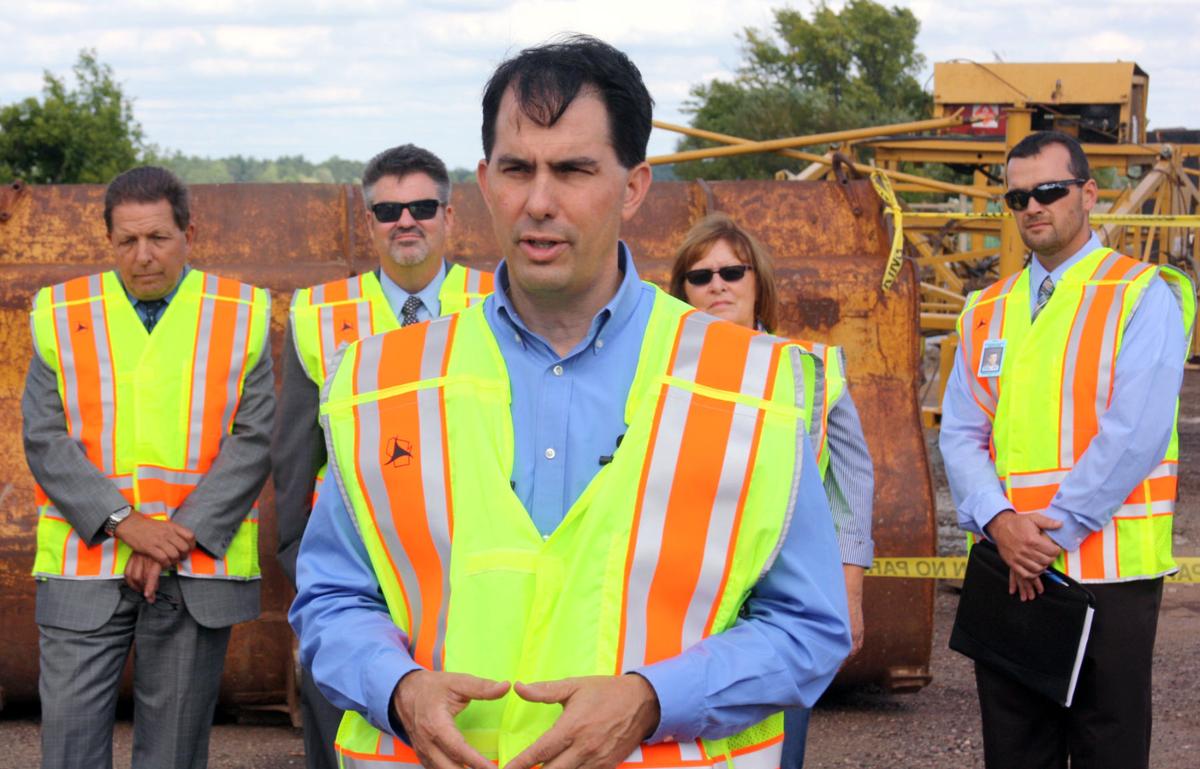 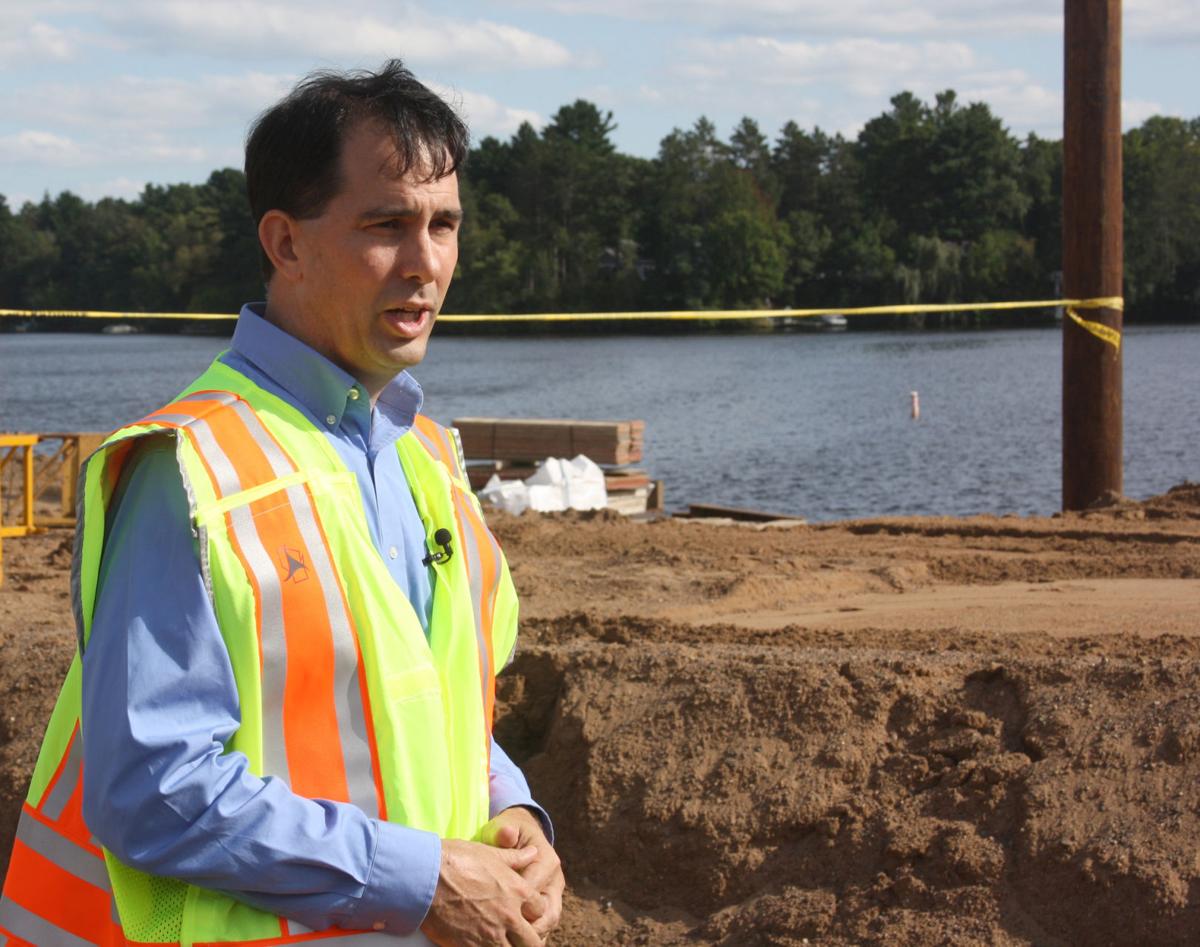 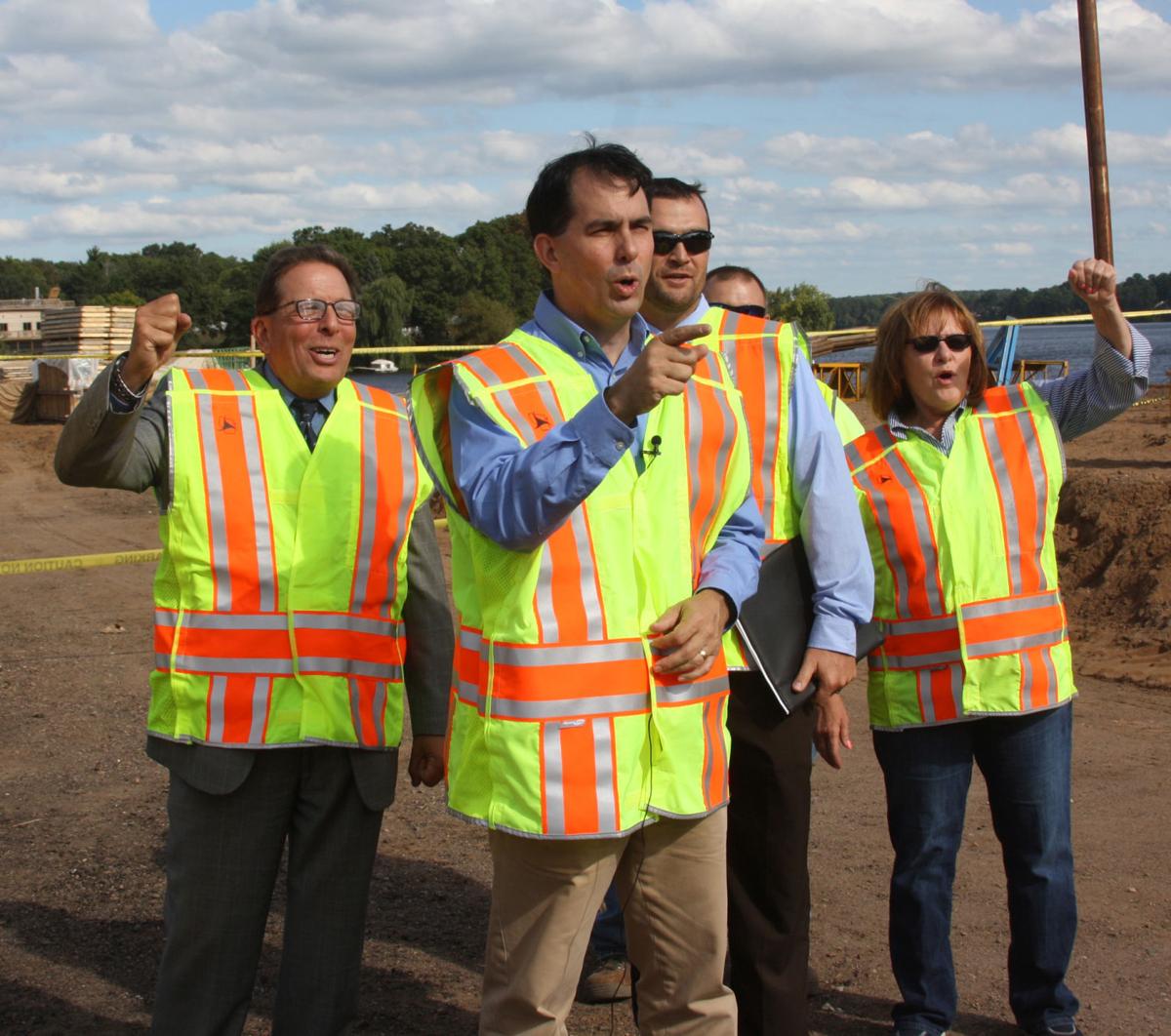 In this file photo from September 2016, Wisconsin Gov. Scott Walker took part in the filming of an ad for Chippewa County Thursday afternoon, following a press conference near Lake Wissota. He was joined by, from left, Chippewa County Administrator Frank Pascarella, Highway Commissioner Brian Kelley and state Rep. Kathy Bernier in chanting, “Chippewa County is ready for you!”

Using the construction on the Highway X bridge over Paint Creek/Lake Wissota as a backdrop, Gov. Scott Walker made Chippewa County one of the locations where he touted his state transportation budget proposal Thursday.

The plan, released by state Department of Transportation Secretary Mark Gottlieb one day before requests for the 2017-19 budget cycle were due from state agencies, calls for a $65 million increase in state transportation aid to local units of government, and more money than ever for the State Highway Rehabilitation Program.

He credited residents telling him at listening sessions across the state that they wanted their local roads and bridges fixed.

He cited the County X bridge project, where state and federal funds paid 80 percent of the costs, as a program the state was increasing funds by 30 percent.

“This is a fiscally sound budget that puts an emphasis on safety and maintenance of existing systems, and helping our partners at the county and municipal governments do the same thing at the local level,” Walker said.

The other major point he emphasized was that the proposal includes no tax or fee increases.

“This plan defies the myth that you can only fix roads and bridges with a gas tax increase,” Walker said. “I said in 2014 when I was up for reelection that I was not going to raise the gas tax or the vehicle registration fee without a corresponding decrease somewhere else, and short of that I’m going to fulfill my promise.”

While that was a key component for the governor, others saw it as the reason Wisconsin has been unable to fund transportation without borrowing. The last state budget called for borrowing $1.3 billion for transportation, an amount that was reduced to $850 million by lawmakers.

By Thursday, it had been cut again, to $500 million, which Walker said is the lowest level of borrowing since the 2001-03 budget.

That was still too much for many legislators, including several vocal Republicans in their first widespread break from the governor since he took office. The big sticking point with local Republicans Rep. Kathy Bernier (R-Lake Hallie) and Sen. Terry Moulton (R-Chippewa Falls) was Walker’s failing to fund the state’s highway program without borrowing.

It caused Bernier, who stood behind Walker with other local officials during his press conference, to vote against the state budget. She stated that the transportation debt service was approaching 25 percent.

“That’s still too high. I’m not comfortable with that,” she said.

Bernier said she was behind an effort in 2015 to allow local governments to raise county sales tax by a half-cent for four years by referendum to fill in the transportation shortfalls, but it never went anywhere.

Moulton had similar reservations, but ultimately voted for the budget. He saw some positive signs in the latest version of the transportation budget, such as lowering the amount of bonding and providing more aid to local municipalities.

“But I’m of the opinion that to fix this long-term, we’ve got to look at the revenue side at some point,” he said.

In that opinion Moulton was joined by Rep. Dana Wachs (D-Eau Claire).

“Granted, there have been some increases to the local governments and that’s good,” Wachs said. “But what is the long-range plan here? We need to have a multi-modal transportation budget that recognizes the needs of industry, commerce and the people, and I don’t see that being accomplished here.”

The legislators had not had time Thursday to pour over the transportation budget. They said there will be plenty of chances for that by the time debate heats up when the next legislative session begins early next year.

“I’ve been telling people the two issues front-and-center this year are transportation and education,” Moulton said.

Both Bernier and Wachs wondered why nothing had ever come out of recommendations made by the Transportation Finance & Policy Commission that was assembled by Walker in 2012. It found vehicle owners in surrounding states paid between $318-$470 more in taxes and fees.

Wisconsin relies heavily on the gas tax to fund its roads budget, while neighboring states depend more on vehicle registration fees. But the gas tax has not been raised since 1997, and as Bernier observed is producing less revenue each year as more drivers turn to fuel-efficient vehicles and drive fewer miles.

The commission recommended that to pay for the road work that was needed, the state should raise the gas tax by five cents per gallon, increase registration fees for commercial vehicles by 73 percent and adopt a mileage-based fee for passenger vehicles of one cent per mile driven.

“Why has there not been any implementation of the recommended revenue enhancers?” Wachs asked. “Why aren’t we doing anything about increasing revenue? Why did they have the study at all?”

Assembly Speaker Robin Vos (R-Rochester) was also critical, saying the governor’s proposal was “a political solution, not a real solution” and also stated the need for increased revenues to fund roads.

“It is more conservative to pay for projects today than it is to borrow the money and make our children pay the price,” Vos said.

Craig Thompson, director of the Transportation Development Association, a statewide transportation advocacy group, referred to the proposal as “short-sighted and troubling.”

“It would provide, for the next two years, needed investment at the local level, but at the expense of important economic corridors,” said Thompson, director of the organization that includes businesses, labor, local governments and citizen groups.

The transportation proposal would halt construction on major highway expansions in Madison, on the U.S. Interstate 94 North-South project in Racine and Kenosha counties and on the north leg of Milwaukee County’s Zoo Interchange. The core portion of the interchange, which now is being rebuilt, would remain on track for completion in 2019.

It would keep on track two large expansions, including the Interstate 39-90 project and Wisconsin Highway 10/441 in the Fox Valley.

Lee Newspapers and the Associated Press contributed to this story.

Meetings will be held in each of the state's 72 counties to allow residents, business and public officials an opportunity to discuss road projects, and "the need for the state to find a sustainable solution."

In this file photo from September 2016, Wisconsin Gov. Scott Walker took part in the filming of an ad for Chippewa County Thursday afternoon, following a press conference near Lake Wissota. He was joined by, from left, Chippewa County Administrator Frank Pascarella, Highway Commissioner Brian Kelley and state Rep. Kathy Bernier in chanting, “Chippewa County is ready for you!”