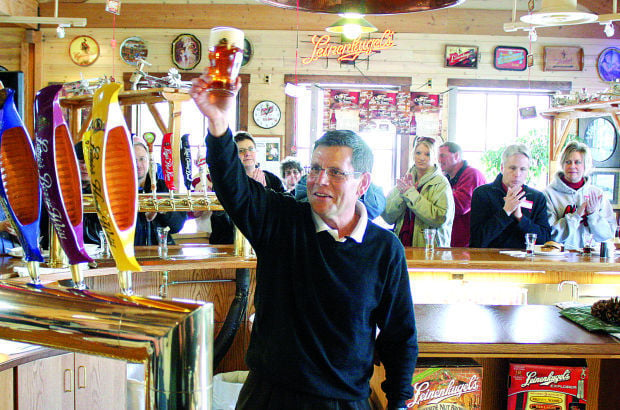 Jake Leinenkugel raises the first glass of Leinie's new Classic Amber Lager in an event to promote the new beer to a group of bar owners, retailers and distributors in February 2009. 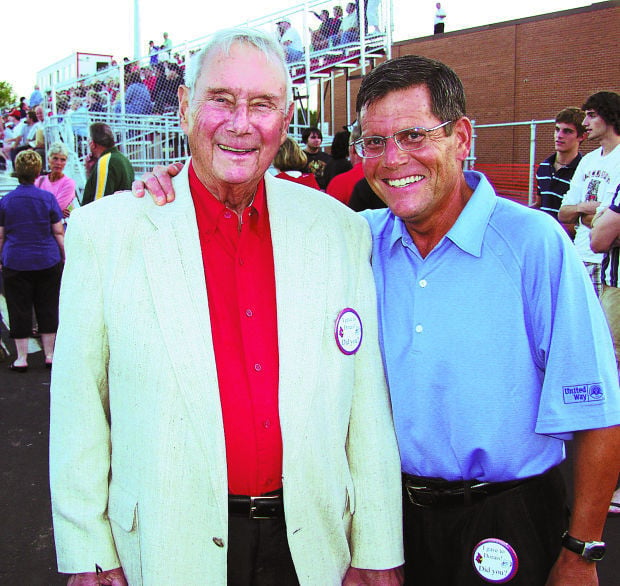 Jake Leinenkugel poses with his father, Bill, at the Dorais Field dedication in August 2007 in Chippewa Falls.

So much has happened in the quarter of a century that Jake Leinenkugel has been running the Chippewa Falls brewery named after his great-great-grandfather that the well-known brewery president hardly knows where to begin.

For starters, he has led the renaissance that has made the Jacob Leinenkugel Brewing Co. one of the fastest-growing beer companies in the nation. His years as Leinie’s spokesman on high-profile advertising campaigns have made him one of the most visible beer executives anywhere.

He has overseen the building of an impressive Leinie Lodge that has become a tourist destination in its own right, and three multi-million dollar expansions of the brewery and a new brewhouse that have cemented the brewery’s future in Chippewa Falls for generations to come.

Then there’s maintaining the family’s local control over its product and the brewery’s identity after the company was sold to Miller Brewing in 1988. At that time, Leinenkugel’s was a traditional brewer, selling Leinie’s original beer, a bock beer in the springtime, and Leinie’s Light, which only was for sale in the Chippewa area.

Being at the forefront of the craft beer craze has its benefits, and Leinenkugel’s positioned itself well for the changing tastes of beer drinkers.

“I’d argue that the Jacob Leinenkugel Brewing Company is the original craft brewery, and Jake is the modern architect of craftsmanship and quality in craft beer,” said Tom Cardella, president and CEO of Tenth and Blake, the division of MillerCoors that oversees craft and import beers.

“In 25 years of leadership, he took the brewery from a 60,000-barrel brewery to one that will sell close to a million barrels this year,” added Cardella, who also is chairman of the board of directors for the Jacob Leinenkugel Brewing Co. “Not only has it come from his magical ability to lead people in Chippewa Falls, but also building trust and deep partnerships with his distributors that goes way beyond business.”

The launch of Shandy a half-dozen years ago has pushed sales into the stratosphere. “I never thought we would brew 500,000 barrels in my time, because it would be 10x from the time when I basically started with the company,” Jake confesses. Now they have doubled even that unthinkable number.

But change doesn’t come easy, or overnight. Jake had been listening to some distributors in the Twin Cities area — an area he helped carve out in the 1980s for Leinie’s. He proposed a fall seasonal beer, maybe an Oktoberfest. What they came up with was Leinenkugel’s Limited, and they put a gold seal on it. It became the first of many specialty beers to hit their mark.

He recalls people who didn’t drink Leinie’s at the time telling him that Limited was the best beer they had ever tasted. “It was one of those a-ha moments: Maybe, if you do new things, you might attract new drinkers. So that sort of started the impetus.”

That interaction with people has paid dividends many times over, and it hasn’t gone unnoticed.

“Jake has been a phenomenal listener to the marketplace. He’s on the street all the time, he travels tirelessly, and to watch Jake work a room is something. It’s a personal thing for him. He makes the connection,” said Aldo Madrigrano, a former chairman of the National Beer Wholesalers Association who owned a distributorship in this area for a few years.

“And he’s continued to build. A lot of people in his position would have sat back and settled down. He’s actually been more aggressive. He wants to leave (the brewery) in the best possible position.”

Words to live by

Leinenkugel drinkers proudly carry the torch for their favorite beer, but the company hasn’t been shy about delivering its own message over the years, either. Its advertising campaigns have been lauded for their ability to make connections, and that doesn’t happen by accident. It takes a consistent approach of following through on its marketing strategy.

There’s three things it looks at as part of branding Leinenkugel’s, Jake said. They call it face, place and story.

“The face is the Leinenkugel family and our employees. The place is Chippewa Falls. It’s not Milwaukee or Denver. It’s Chippewa Falls. Why did our great-great-grandfather trek all the way up here? The story’s magical,” he said.

“We’ve gotten much better at that, and over the last 10 years it’s really focused on those three things. You’re going to see Leinenkugel’s, you’re going to see a banner of where we’re from drop down or we’re going to talk about it. And the story is paying homage to all those who came before us.

“Chippewa Falls is such a part of who we are,” Jake said, relating a story about the Leinenkugel Family Road Trip they undertook a couple of summers ago to connect with big customers and fans at events across the country.

“We knew that beer drinkers and our distributors loved it when we were out there to greet them. And when you talk about Chippewa Falls, it’s like, ‘Oh, I have to get up there.’

“I’ve had a 32-year career here, and the last two are the ones that have really exploded. How important it is to bundle face, place and story.”

Initially Jake became the primary spokesman for the brewery. It was a role he had to grow into.

“I didn’t feel comfortable because ‘Who’s Jake, and what gives Jake the right to talk about something he’s just learning?’ Even though I was here for approximately eight or nine years, I thought I knew everything and I knew nothing about the industry, really. Also, anytime you put a person as the figurehead behind the brand, that can be dangerous.”

But it led to the current emphasis on the family and Chippewa Falls, and has made both indispensable.

“We have some of the finest brewing equipment in the industry right here in Chippewa Falls. We would probably not have been able to do that as a standalone family,” Jake said, listing three separate expansions, each costing between $5 million and $6 million.

It’s about the people

Jake is quick to give credit for the brewery’s success to many people. Among the most important are its employees, many of whom have worked there for decades. The family part of the story even extends to employees, because a second generation in some cases has begun working at the brewery.

“We have one of the best brewmasters in the world in John Buhrow. This is what he loves; this is his baby,” said Jake, naming off John Hensley in brewing, controller Jean McPhail and general manager Dan McCabe as key people who allow him to sleep at night.

Two people have played integral roles in his life.

Gen. Pete Pace, who became chairman of the Joint Chiefs of Staff under President Bush, was the key person during what Jake calls a transformative period in his life, his six years in the Marines. “I would not be the person I am today if not for that,” he says. He has kept in contact with Pace through the years.

The other is his wife of nearly 40 years, Peggy. She has been with him every step of the way, raising the children when he’s away, listening and offering helpful advice.

“I truthfully want to spend more time doing what my wife and I missed out doing. We love hiking, and we just starting playing golf together, and we love exploring and traveling. And there’s the grandchildren.”

Sounds like the man who has never had trouble staying busy will have no trouble in retirement, either.

Jake Leinenkugel was born and raised in Chippewa Falls, and he works and lives here. But his future was set more than 6,000 miles away.

Jake Leinenkugel raises the first glass of Leinie's new Classic Amber Lager in an event to promote the new beer to a group of bar owners, retailers and distributors in February 2009.

Jake Leinenkugel poses with his father, Bill, at the Dorais Field dedication in August 2007 in Chippewa Falls.