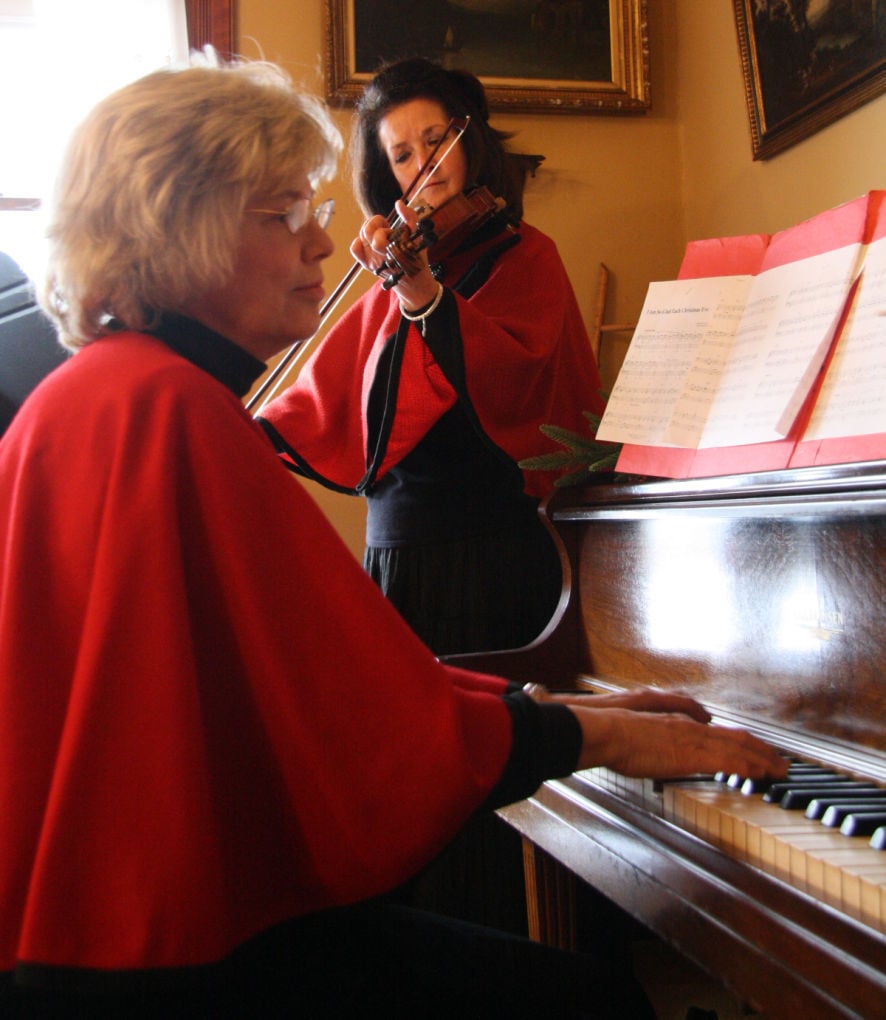 Becky Splette plays the piano and Jeanne Rowe plays the violin during the annual open house of the Cook-Rutledge Mansion Sunday afternoon. 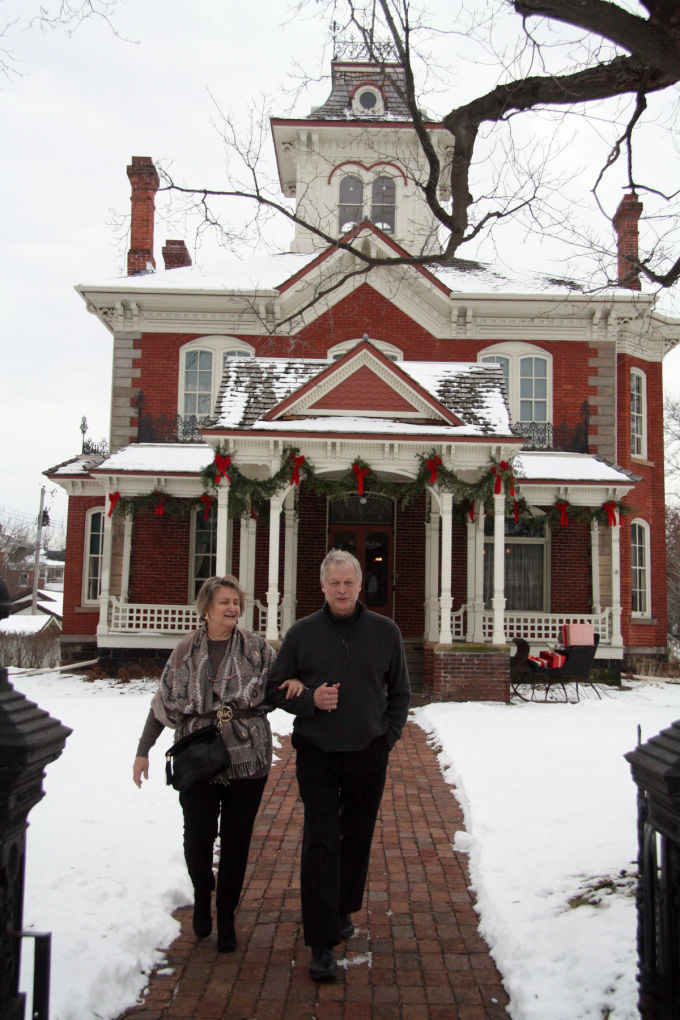 Bob and Ginger Wierman leave the Cook-Rutledge Mansion during an open house Sunday afternoon. The home once belonged to a lumber baron Edward Rutledge and is now on the National Register of Historic Places. 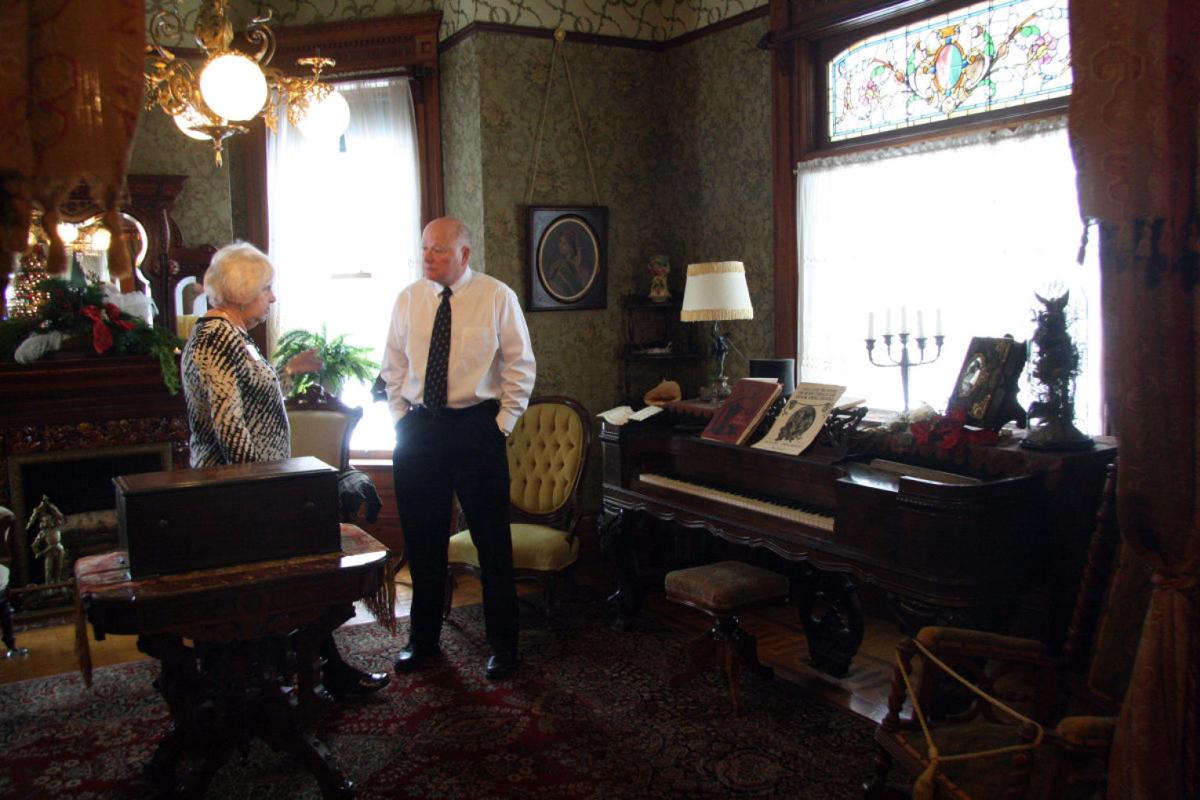 Becky Splette plays the piano and Jeanne Rowe plays the violin during the annual open house of the Cook-Rutledge Mansion Sunday afternoon.

Bob and Ginger Wierman leave the Cook-Rutledge Mansion during an open house Sunday afternoon. The home once belonged to a lumber baron Edward Rutledge and is now on the National Register of Historic Places.

A gentleman clad in Victorian era garb held the door open and bid seasons greetings as Bob and Ginger Wierman exited the Cook-Rutledge Mansion arm-in-arm and descended the stairs to the sidewalk.

Sunday, the mansion, located at 505 W. Grand Ave., opened its doors to the public for its annual holiday open house. The event used to be for donors to the mansion and other people willing to pay for it but around 10 years ago the board of directors decided to allow anyone to come.

Barbara Ray, a member of the board, said they wanted to give more people a chance to see the mansion than otherwise might if they had to pay.

Tours are available Thursdays through Sundays in June, July and August as well as by appointments but those tours come with a cost.

“It’s wonderful to see so many people bringing their kids here,” Ray said.

She said that the home demonstrates how not everyone who lived in the 1800s lived like Laura Ingalls from Little House on the Prairie.

“It’s interesting to see what could be done at the time,” she said.

Befitting the lumber baron that Edward Rutledge was, his house was outfitted with the most up-to-date fixtures and ornate stained glass.

“It was built to last,” Ray said, indicating that in today’s world of planned obsolescence things just aren’t made the way they used to be.

“For a lot of people, that’s something unusual,” she said.

People sat inside at tables set with fine silverware, enjoying deserts and refreshments. In one room two women played Christmas music on a piano and violin. In every room sat a person wearing a name tag who was more than happy to talk about everything the visitors could see.

“It really is amazing,” said Joanne Bordacki, who drove up from Eau Claire for the open house. “It reminds me of something you’d see in New York.”

The open house ran from 1-4 p.m. and the whole time the doorman stood ready to greet and bid farewell to the event’s attendees.

Ray said the turnout was very good. The weather wasn’t bad and there wasn’t a Green Bay Packers football game to compete with.

Back outside the Wierman’s walked to their car on the not-so-cold December afternoon. They said they try to come to the open house every year.

A popular Chippewa Falls historical site is being brought to life as a fictional lumber baron’s mansion in an upcoming film.

That's a pretty fine sight to behold actually. It's rare to see structures like that which was built centuries ago. By looking upon the walls, the staircase ( see more at: http://allstairs.net/ ) and ceiling, you will somehow have an idea how they were built back in those times.