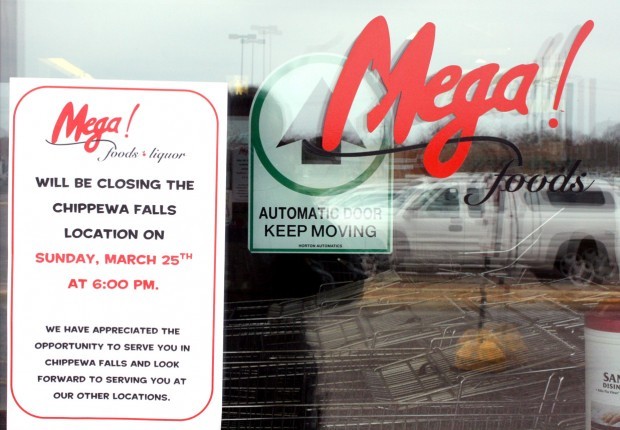 The Chippewa Falls store of Mega Foods posted a sign on its doors announcing it will close for good Sunday evening. 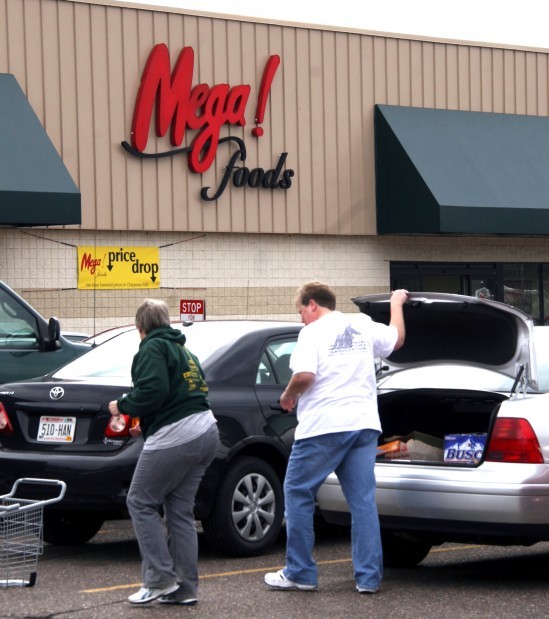 Customers at the Chippewa Falls Mega Foods grocery store load groceries into the trunk of their car Thursday. The store announced Thursday that it would close its doors for good on Sunday.

Mike Buck understands that the Mega Foods supermarket on the south side of  Chippewa Falls has many loyal customers and workers.

“That is precisely why we’ve worked so hard to keep it open,” said Buck, CEO of the store’s parent company, Consumers Cooperative Association of Eau Claire.

Financial losses for the grocery store at 303 Prairie View Road took their toll. On Thursday, the association announced it was pulling out of Chippewa Falls, closing its store as of 6 p.m. Sunday.

Buck said the store’s 65 workers will be offered jobs at Mega’s two stores in Eau Claire, which remain in business. Those workers being offered jobs in Eau Claire include George Wolding, a grocery bagger who celebrated his 98th birthday March 19 and was featured in the Herald last Sunday.

Chippewa Falls officials were shocked by the decision to close the store.

“You feel like (it’s) a death in the family,” said Chippewa Falls Mayor Greg Hoffman.

City Planner Jayson Smith was part of negotiations when the Mega Foods building was constructed. It opened in 1988 as Kerm’s and then Kerm’s Pick ‘n Save until Mega took over operation in 1991.

Smith had no inkling that the association, which renovated the building a year ago, would decide to now close the store.

Mega’s produce and deli departments were expanded recently, along with the bakery and liquor department, and Buck said the store lowered its prices.

“Our customers in our market in some ways did not respond the way we wanted (them) to respond,” Buck said.

The Chippewa Falls-Eau Claire market is very competitive for supermarkets, Buck said. Plus, he said customers are going through a lot during a downturn in the economy.

A press release by the association detailed a few factors over the past several years that led to the closing.

“The traffic diversion created by the Highway 53 bypass and the many other options for purchasing groceries have made it difficult to compete profitably at this store,” the release said. “While our organization is strong, year over year of sustained losses does not align with our strategic plan, nor does it serve our shareholders, members or customers well.”

The association goes on to say its stores at 1201 South Hastings Way (Mega East) and 2615 N. Clairemont Ave. (Mega West) are doing well financially and will stay in business.

Buck said the building of a new Mega East store was not a factor in the decision to close the Chippewa Falls store, which he said has about 45,000 square feet.

A shareholder in the Consumers Cooperative Association, Rick Flynn of Chippewa Falls, attended a shareholder’s meeting last Thursday at the Mega East location. Flynn said there was no mention at the meeting that the Chippewa Falls store was not doing well financially, nor that the association planned to close the store.

It also came as a surprise to employees. A worker at Mega Foods who did not give his name said workers had no hint of the closing until being told by store officials Thursday morning.

The news of the closing left those both inside and outside of the Mega Foods operation feeling the loss.

“It’s a sad day for the city whenever you lose a prominent business,” Hoffman said.

Proximity is a big factor for some people when it comes to staples of everyday life such as groceries. And among those taking the closing of t…

The Chippewa Falls store of Mega Foods posted a sign on its doors announcing it will close for good Sunday evening.

Customers at the Chippewa Falls Mega Foods grocery store load groceries into the trunk of their car Thursday. The store announced Thursday that it would close its doors for good on Sunday.