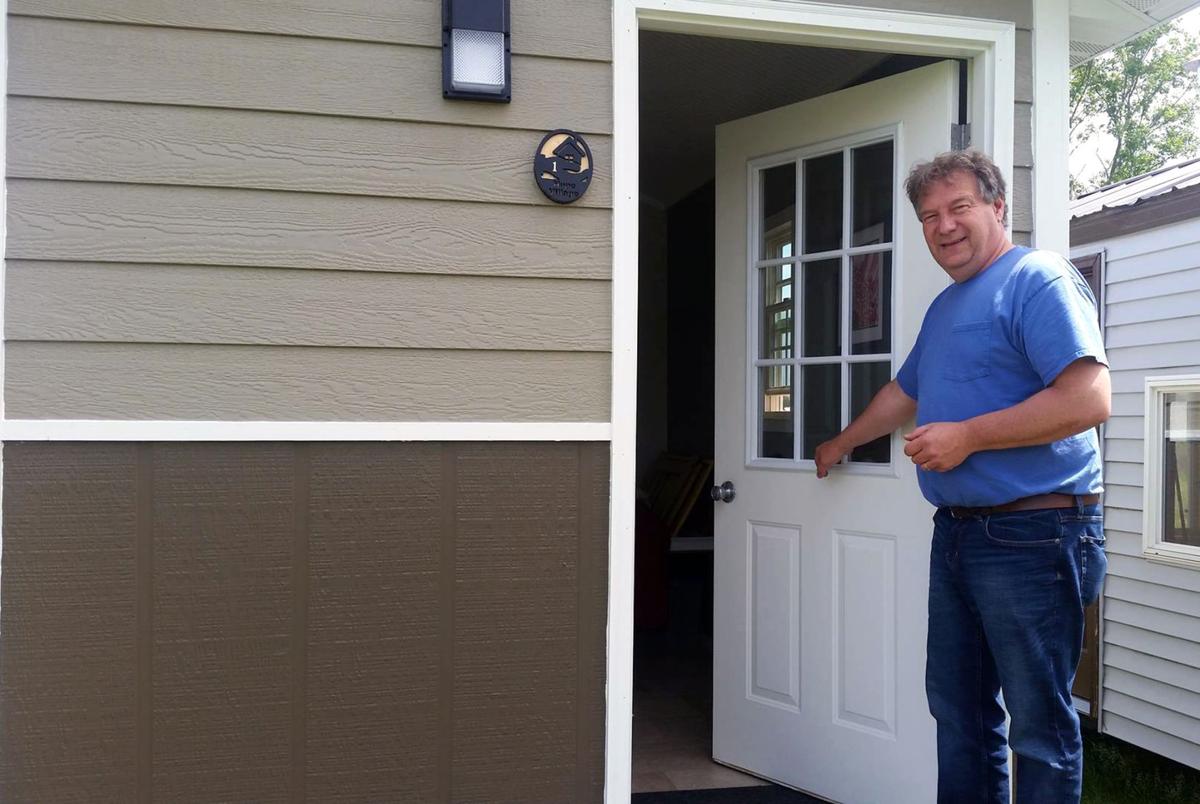 Mike Cohoon, Chippewa Falls Mission Coalition’s lead man on the tiny houses, Hope Village project, stands outside the first home, which was finished in late May. Volunteers are helping build the third home June 17-26 at the Northern Wisconsin State Fairground. 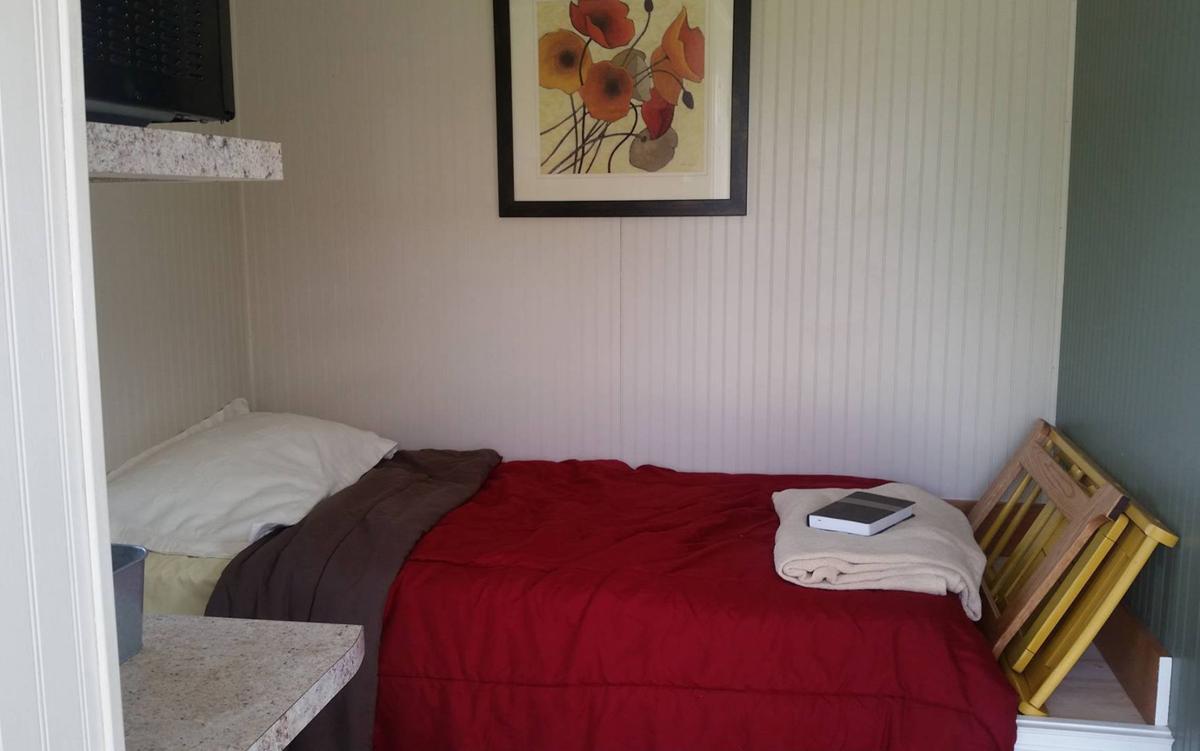 The inside of the first completed tiny house. Many materials, such as the photos and linens, have been donated by various people and organizations.

It doesn't sound like much, but that small space is enough to keep one person, or one family, off the streets and in a warm, safe space.

"These houses will give people more dignity," Mike Cohoon, Mission Coalition member and leader of the project, said. "They're not very big, but they can call it home, store items, lock it up and it's safe at night."

They finished their first tiny house at the end of May, and recently received a donation of an old ice-fishing house. Cohoon said they plan to finish up that house and a third by June 26.  They are using a barn at the Northern Wisconsin State Fairgrounds to build the houses from June 17-26, and volunteers can sign up on VolunteerSpot.com for two-hour shifts.

While the first two are 8x12-foot homes, Cohoon said the third is going to be a 7x15-foot home, which he hopes could house a family or mom with two children.

Each home has a bed, microwave, mini refrigerator and collapsible table built into the wall, as well as a portable toilet (like you might see in a camper). The homes have electric hookups and are capable of being heated in the winter.

Each home costs about $5,000 with materials and furnishings, but Cohoon said they've had many of those things donated to them, and he hopes for that to continue.

Cohoon, a pastor at Landmark Christian Church in Lake Hallie, said the church will host the first two as soon as they are ready to go. Eventually they hope to house 10-12 homes on a single property called Hope Village Community and keep two mobile throughout Chippewa County, but until then local churches have volunteered to keep the homes on a temporary basis.

"Our goal is for them to provide housing to people who are homeless for now on an emergency basis and then on a transitional basis as we get into this farther," he said. "One thing homeless people struggle with is they isolate themselves because they're used to hiding from people, where (Hope Village) will give them a community to live with."

While residents won't have to pay rent, there will be an application and intake process done by a social worker, and residents will have to volunteer with the coalition to stay in the home.

After Harmony House, the only Chippewa County homeless shelter, closed down in 2014, Cohoon said there wasn't anywhere for homeless people to turn to in the county.

Other agencies in Chippewa County also noticed this void.

Ruth Rosenow, executive director of Chippewa County Housing Authority, said there was no real way to keep track of the homeless population, who tend to be the most difficult to find because they are constantly on the move.

"If you don't serve them while they're at your door or in the very near future, you lose track of them," Rosenow said. "We always say, 'check in with us,' but if they don't have a place to sleep that night, that takes precedence over everything else."

The tenant-based rental system her agency provides has served 39 different households since January. She said the people on this list either meet the federal definition of homeless or are at risk of becoming homeless. There are currently 63 households on the waiting list, and those with disabilities take priority.

She realizes tiny houses won't solve the entire need, but it'll create a better way to keep track of the population and serve a specific population of people.

"We've learned is that rather than design one program and try to force all the homeless people into those circumstances, a rural community like ours needs various resources that meet different needs," Rosenow said. "Not a lot of them, but a variety."

A perk of the tiny houses is they can be mobile, so if a family out in a rural town such as Cornell or Holcombe needs a place to stay, they can bring the house to them without disrupting their support network and school system — two of the most important things homeless people need and are usually lacking.

And with the coalition involved in building and hosting the homes, people in the community are gaining a better understanding of the diverse population of people who are homeless.

She said the next step is going into the neighborhoods of the churches who have volunteered to host these houses and educating them on what that means.

"The population is not necessarily all alcoholics or criminals, it could be families, or anyone," she said. "The next step is meeting with neighborhoods. We're going to do this together. We are not doing it to you, we want you to be a part of it."

DETAILS: A link to sign up for two-hour shifts can be found on the  Hope Village Facebook Page

At the end of this week, the two tiny houses hosting people without homes at Landmark Christian Church in Lake Hallie will hit the 200th night…

Watch Now: Trump goes to court to get his Twitter back

Mike Cohoon, Chippewa Falls Mission Coalition’s lead man on the tiny houses, Hope Village project, stands outside the first home, which was finished in late May. Volunteers are helping build the third home June 17-26 at the Northern Wisconsin State Fairground.

The inside of the first completed tiny house. Many materials, such as the photos and linens, have been donated by various people and organizations.