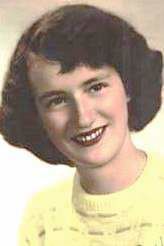 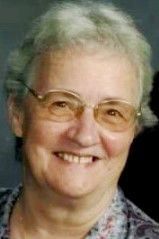 She was born March 26, 1934, in La Crosse to Rose Ann Spaeth and Floyd Scott. Rose Ann married Francis Wittrock in 1938. Henrietta (Hank) grew up in Chippewa Falls, and graduated from Chi-Hi, class of 1952.

While working at the soda fountain at Bennett Walgreens in Chippewa Falls, she met the love of her life and Dec. 14, 1953, she married James Matthew Campbell at St. Charles Catholic Church in Chippewa Falls.

They resided in Chippewa Falls, where she raised their six children and made their home. Her first job was at Bennett Walgreen Drug Store, then at Mason Shoe, where she retired to raise their six children. Once her kids were grown, she worked at the Salvation Army Store in Chippewa Falls. Henrietta loved to decorate for the seasons, especially Christmas. She also was an avid collector of Campbell’s Soup items, elephants, dolls, etc. Summers found her working in her flower beds, fishing and always reading a book. Winter found her doing her genealogy.

Most of all she loved being a mother, then the thrill of being a grandmother, great-grandmother and great-great-grandmother, all of whom she loved to spoil. She had a special touch with all of them. She loved children of all ages. Hank was involved in all of her children’s activities from Cub Scouts, Brownies, Girl Scouts and 4-H, to showing her sons how to field dress small game. She and Jim always put their children first.

She kept in touch with family and relatives to see if everyone was doing all right or needed some help. She was always willing to listen and never judged. Hank had a great deal of common sense and creativity. Her quick wit and great sense of humor often had us laughing as did the funny little look she gave that said you were a stinker.

She enjoyed fishing and the occasional casino visit with Jim and his sister and brother-in-law, where she was usually the luckiest of all. She had a servant’s heart and no doubt has heard “well-done, good and faithful servant,” already in heaven.

She was preceded in death by her beloved husband, James Matthew Campbell; her parents, Rose Ann and Floyd; her stepfather, Francis; half-sister, Frances Koehler; half-brother, Joseph Wittrock; and a half brother-in-law, Gene Tietz; as well as two half-nephews, John and Robert Wittrock.

Hank’s kind and giving spirit will be sadly missed by her family and friends. Our comfort is in knowing that she is reunited with the love of her life, Jim, in heaven.

In lieu of flowers, memorials are appreciated and may go the St. Jude’s Children’s Hospital.

Special thanks to HSHS St. Joseph’s Hospice and Appeal to Heaven.

A funeral service will be held at 2 p.m. Saturday, June 20, at Pederson-Volker Funeral Chapel, Chippewa Falls, with Fr. Jesse Burish officiating. Interment will be at Hope Cemetery, Chippewa Falls. Visitation will begin at 12:30 p.m. Saturday, at the funeral home. During the visitation and service, mask wearing is appreciated.