Become a Member
Read Today's E-edition
Share This
Tiny house comparison: How to tackle an idea no one's heard of
0 Comments
Share this 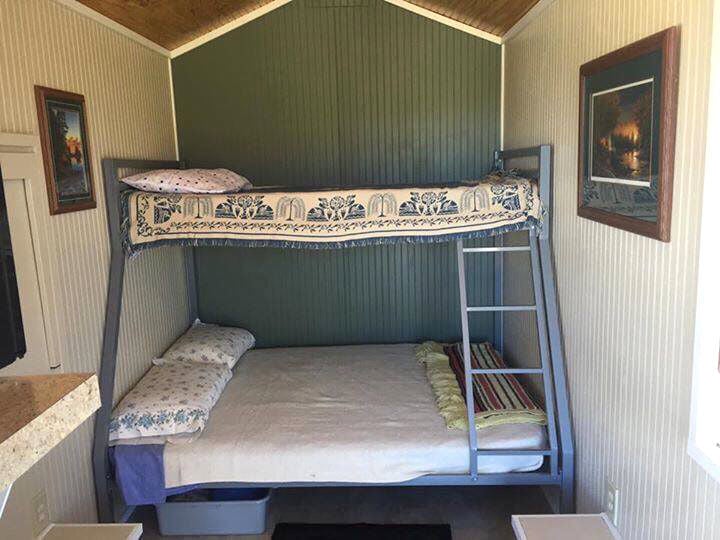 This photo provided by Hope Village Chippewa Falls shows the inside of one of the tiny houses that could eventually stay in Trinity United Methodist Church’s parking lot, pending approval from City Council. The home is designed for a family. 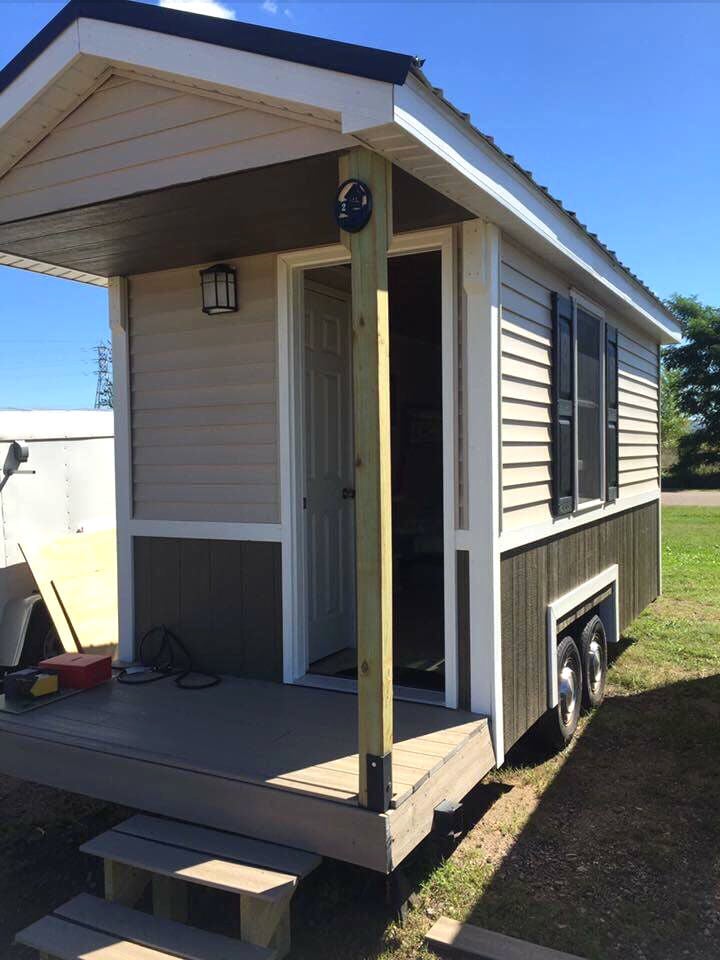 This photo provided by Hope Village Chippewa Falls shows the outside of one of two tiny houses placed at Trinity United Methodist Church in Chippewa Falls.

The homes, a product of the Chippewa Falls Mission Coalition and led by Landmark Christian Church’s pastor Mike Cohoon, are designed to help those who are homeless have a safe place to call home, and also provide resources to get those people back on their feet.

Currently, the homes are staying on church properties.

“We’re partnering with churches now, and we want to keep that partnership, but we know eventually for the good of those who are living in the homes, it would be better for them if they lived in a community together,” Cohoon said.

His hope is to acquire land to build a permanent village for up to 12 tiny houses, with a communal building that would house bathroom facilities, a workshop to create and sell items and other resources the community members could use.

They have looked at several properties. Ideally, the location would be downtown so residents could easily access stores and government offices.

Chippewa County isn’t the first place in the state to try out the concept.

Cohoon is using Occupy Madison’s village in the heart of the capital as a model.

Bruce Wallbaum, who is on Occupy Madison’s board, said they’ve had their village for nearly two years now. While they initially faced doubts from both neighbors and the government, he thinks those are based more in fear than anything else.

“As humans we don’t seem to be too different,” he said. “Everywhere you go the concept of homelessness seems to scare people, but it’s the people without homes who should be scared.”

OM Village sits at 304 N. Third St. in Madison. There is room for up to nine tiny homes on the site, and it currently has five. Two years in, Wallbaum said they’ve changed the minds of neighbors, many of whom reported to the Wisconsin State Journal in September 2015 only praise for the village.

It’s also grabbed national and worldwide attention, with visitors from more than 23 states and several countries setting up times to tour the village.

“People who come up often say it is a whole different story than they expected to hear,” Wallbaum said.

He’s hopeful the attention makes the public more knowledgeable about the homes and accepting when they pop up, as it is possible they become more common.

Like Hope Village, Wallbaum said the homes in OM Village are all on trailers. Before the village existed, they kept the homes on streets and moved them every 48 hours, per Madison’s parking ordinance.

Residents of OM Village have to work their way into the homes. Instead of filling out an application, as is the protocol in Chippewa Falls, Wallbaum said people have to put in a certain amount of hours working in the on-site workshop before earning stewardship to a house.

The workshop is where they build the homes, but they also create items to sell in an on-site store. Village residents also participate in a plant sale, take care of a garden and will soon help out in a greenhouse, since the village just won a grant to build one on site.

The only complaint they’ve received in the past two years has been about noise, Wallbaum said.

“Once in awhile we forget to close the doors to the workshop,” he said. “As far as other parts of it, the crime that people feared, there hasn’t been any of that.”

The Madison Police Department hadn’t reported any calls to police regarding the site, according to the September 2015 WSJ article. Wallbaum said to his knowledge none have occurred since.

Cohoon said Hope Village is similar in that the stewards have to earn their keep, so to speak, by volunteering at the church and helping build the homes. They also work with a “navigator,” a volunteer who helps them figure out health, job and finance-related issues.

There is an application process for stewards, with a guaranteed 7-day stay, if approved. That can be renewed as long as needed, but Cohoon sees the homes being temporary shelter rather than a long-term solution, unlike OM Village.

Right now, they are approved through the municipality on a case-by-case basis.

Trinity United Methodist Church, 201 W. Central St., Chippewa Falls, applied for a special-use permit from the city to grant up to two tiny homes to stay on their property. That is waiting on City Council’s approval, which will be acted upon at the Tuesday, Feb. 21, Council meeting.

Cohoon hopes after this first one, the idea will be more familiar and it won’t be such a process to apply.

In Madison, Wallbaum said the city created a new ordinance altogether for the tiny homes, dubbing them as “portable shelter units” under the planned urban development zoning ordinance.

“It’s one of the most complicated things,” Wallbaum said.

But it’s provided a solution to a problem, and that’s Cohoon’s ultimate goal in Chippewa County as well.

It took Occupy Madison Inc. two years to turn their idea into reality, and Cohoon, along with the Chippewa Falls Mission Coalition, is willing to put that time in to Chippewa Falls as well.

'We found it sitting in a field': 1954 fire truck to make its return to the Chippewa Falls Fire Department

A 1954 fire truck that was used by the Chippewa Falls Fire Department until it was sold in 1987 is returning to the city, and when the public …

At least five people in Northern California have contracted the omicron variant of the coronavirus, and the outbreak is linked to a wedding in Wisconsin last month.

Michael Hanke is grateful that the Chippewa Falls community has Klein Hall, a homeless shelter for veterans located on the Northern Center gro…

Chippewa County Supervisor Tom Thornton passes away at 67 from cancer

Chippewa County Supervisor Tom Thornton wasn’t afraid to tell you exactly what was on his mind, friends and colleagues say.

'It is about time': We're Wolves releases debut self-titled album

Good things come to those who wait, and those who wait for the first release from a local supergroup are set to have their patience rewarded.

A Bloomer man who was convicted of two counts of possessing child pornography in January 2019 will soon be released from prison, and will be r…

A study on liminality: Chippewa Falls native releases book 'Tales from the Liminal'

A Chippewa Falls native is continuing to make waves in the literary world after a lifetime of liminal and transformative experiences.

Watch Now: Who should get a booster shot?

Watch Now: Who should get a booster shot?

Watch now: An inside look at the USS Arizona Relics Program and its history

Watch now: An inside look at the USS Arizona Relics Program and its history

This photo provided by Hope Village Chippewa Falls shows the inside of one of the tiny houses that could eventually stay in Trinity United Methodist Church’s parking lot, pending approval from City Council. The home is designed for a family.

This photo provided by Hope Village Chippewa Falls shows the outside of one of two tiny houses placed at Trinity United Methodist Church in Chippewa Falls.